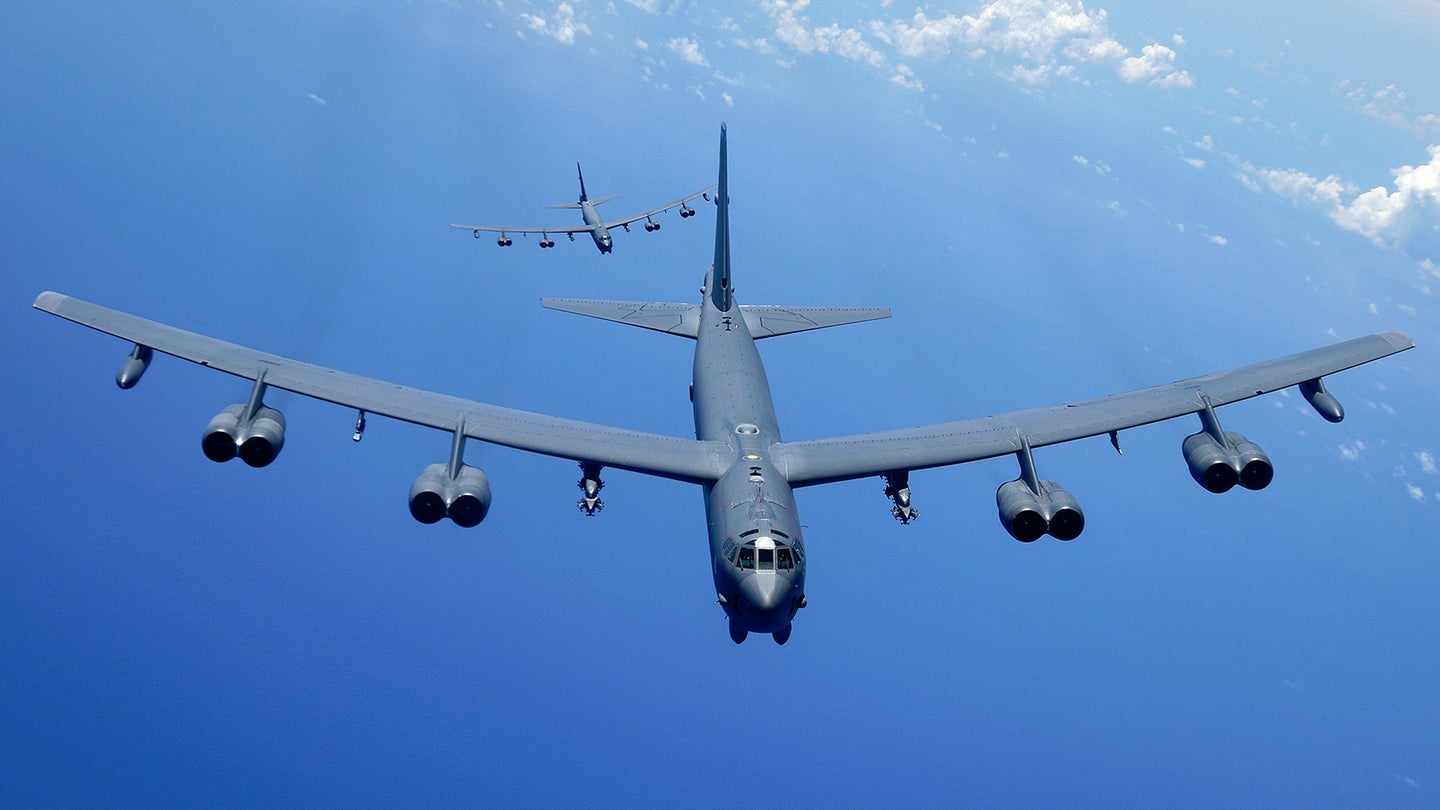 Russia says that it sent Su-27 Flankers to intercept multiple U.S. Air Force B-52 Stratofortresses flying over both the Baltic Sea and Black Sea regions today. In one of the encounters, one of the bombers was flying directly toward the Crimean Peninsula, which the Kremlin occupies, in what could have been a mock strike run. Another one of the B-52s subsequently made an emergency landing at RAF Mildenhall in the United Kingdom following an unrelated in-flight emergency.

The Russian Ministry of Defense and the country's National Defense Management Center both released statements about the intercepts on June 17, 2019. The same day, U.S. Air Force's in Europe released its own statement confirming that B-52s from the 5th Bomber Wing at Minot Air Force Base in North Dakota had flown missions in support of three different exercises, but did not name them. The annual NATO-led Baltic Operations (BALTOPS) exercise is presently ongoing in and around the Baltic Sea, while the U.S. Army and Romanian Land Forces are hosting the latest iteration of Saber Guardian in the Black Sea region, both of which have included B-52s in the past. Online flight tracking software showed that at least three bombers had deployed from the United States and then two continued back to base after conducting the marathon missions.

"On 17 June 2019, crews of the Russian Su-27 fighters... intercepted U.S. Air Force B-52H strategic bombers, which were approaching the state border of the Russian Federation from the direction of the Black and Baltic seas," Russia's National Defence Management Center said, according to state-run media outlet Sputnik.

“The crews of Russian Su-27 fighter jets … have intercepted US Air Force B-52H strategic bombers, that approached Russian state border from the Black and Baltic seas,” the Russian Ministry of Defense said in its own release, according to RT.

Neither Russian government statement said exactly where the intercepts occurred or how many total aircraft were involved. The B-52s remained in international airspace the entire time, according to both releases, though the Kremlin contended that they were flying in a provocative manned toward Russia's territory. The B-52H is capable of executing stand-off conventional and nuclear strikes using cruise missiles. Such operations may have looked similar to the flight profiles flown.

There is no indication in either case that American and Russian aircraft came dangerously close together, as has been the case during other intercepts in recent years. Krasnaya Zvezda, the official newspaper of the Russian Ministry of Defense, claimed that Russian aircraft had scrambled to intercept foreign aircraft close to the country's airspace 10 times in the past few days, but again, with very limited detail about those encounters. Last week, there had been reports previously about Russian intercepting U.S. and Swedish intelligence, surveillance, and reconnaissance aircraft over the Baltic Sea.

But there's definitely no denying that B-52s were in both the Black Sea and Baltic Sea regions on June 17, 2019. Plane spotters used online flight tracking software to monitor a trio of B-52s, using the callsigns Hodor 51, 52, and 53 – possibly a reference to a character from the immensely popular television show Game of Thrones, which recently concluded – flying in Europe throughout the day.

Two of those bombers, Hodor 51 and 52, flew overland to Romania, likely to take part in Saber Guardian, which involves air, land, and sea forces training for a major conflict in that region. Hodor 52, however, appeared to break away at one point and fly out over the Black Sea toward the Crimean Peninsula. Russia has occupied this region since 2014 when it seized it from Ukraine and illegally annexed it.

The bomber, in this case, did appear to be heading straight toward the Crimean coastline and came within 40 miles of the Peninsula, before turning around. The War Zone can't remember a B-52, or any other U.S. combat aircraft, flying a similar flight profile in the Black Sea in the past five years, but even if it's not necessarily unheard of, it's definitely not common, either.

It's not clear what the objective of this run was, though the U.S. government has been particularly adamant in recent years about reinforcing its right to operate in international waters in the Black Sea near both the Ukrainian and Russian coasts, despite the Kremlin's objections.

This flight also follows a report from Defense One that Russia has further increased its defensive posture on the Peninsula in the past year and a half. Russian forces now operate S-400 surface-to-air missile systems at no less than five different sites and older S-300s at four more. There are combat aircraft deployed to four bases on the Peninsula and the Kremlin appears to be reactivating or otherwise improving a number of Soviet-era military installations there.

Separately, the U.K. Ministry of Defense released photographs of a B-52 flying in the Baltic, which appears to have been Hodor 53. The pilot or pilots onboard a Royal Air Force (RAF) Eurofighter Typhoon from 121 Expeditionary Air Wing, which is presently deployed to Estonia as part of the NATO Baltic Air Policing Mission, grabbed the shots of the bomber during "routine interoperability training," according to an official Tweet.

Beyond the interoperability training, the B-52 was likely making an appearance at BALTOPS, a large annual exercise that NATO leads in the Baltic Sea and surrounding areas. This is another sea, air, and land exercise that prepares forces from the Alliance and its partners for a potential major conflict in the strategic waterway. In addition to the United States, personnel and assets from Belgium, Denmark, Estonia, France, Finland, Germany, Greece, Latvia, Lithuania, the Netherlands, Norway, Poland, Portugal, Romania, Spain, Sweden are taking part.

The Scandinavian nations of Finland and Sweden are not NATO members, but have been growing closer to the military bloc in response to growing Russian threats. Exercises in the Baltic Sea, such as BALTOPS, regularly draw the attention and ire of the Kremlin, especially if aircraft and ships get close to its Kaliningrad enclave, which sits between Poland and Lithuania and is geographically separated from the rest of Russia. The Kremlin has already publicly announced that it is monitoring the BALTOPS exercise, as per usual.

In March 2019, Russia intercepted Air Force B-52s – as seen in the video below – that it similarly accused of acting provocatively in the Baltic Sea, but also noted that they did not come within 90 miles of Kaliningrad. It's worth noting that this region is so constrained that, at its widest, the distance between Kaliningrad and the Swedish shore on the other side is less than 200 miles.

As such, Intercepts in the region are common all around. On June 17, 2019, the RAF announced that it had scrambled its Baltic Air Policing jets twice in the preceding three days, as well. These were the seventh and eight intercepts the aircraft had conducted since arriving in Estonia in May 2019.

After the three American bombers concluding their respective training missions and beginning the long trek back to North Dakota, one of the B-52s suffered a still-unspecified in-flight emergency over the United Kingdom, forcing it to land at RAF Mildenhall. Unconfirmed reports suggest that one or more engines may have failed, but there have been no reports of any injuries from the incident, thankfully.

All told, the intercepts themselves seem to have been relatively routine based on the statements from all the parties involved, especially compared to previous incidents that were either dangerous or otherwise especially brazen. As with the deployment of six B-52s to Europe in March 2019, however, these latest encounters do seem to reflect an escalation in tensions between the United States, and its NATO Allies to a less degree, and Russia.

The flight path of Hodor 52 toward Crimea certainly reflects a very different kind of American military activity in the Black Sea region than we are used to seeing. Though Air Force bomber activity in Europe has definitely been increasing in recent years, in general, it is intelligence, surveillance, and reconnaissance aircraft that typically fly near Russia's borders.

As long as these trends continue, we can expect to see a similar uptick in intercepts and other tit-for-tat activities. Hopefully, they'll be as uneventful as these latest encounters in the Black Sea and Baltic Sea.