The external tanks could give F-35s significantly valuable extra range and loiter time for certain key missions and circumstances. 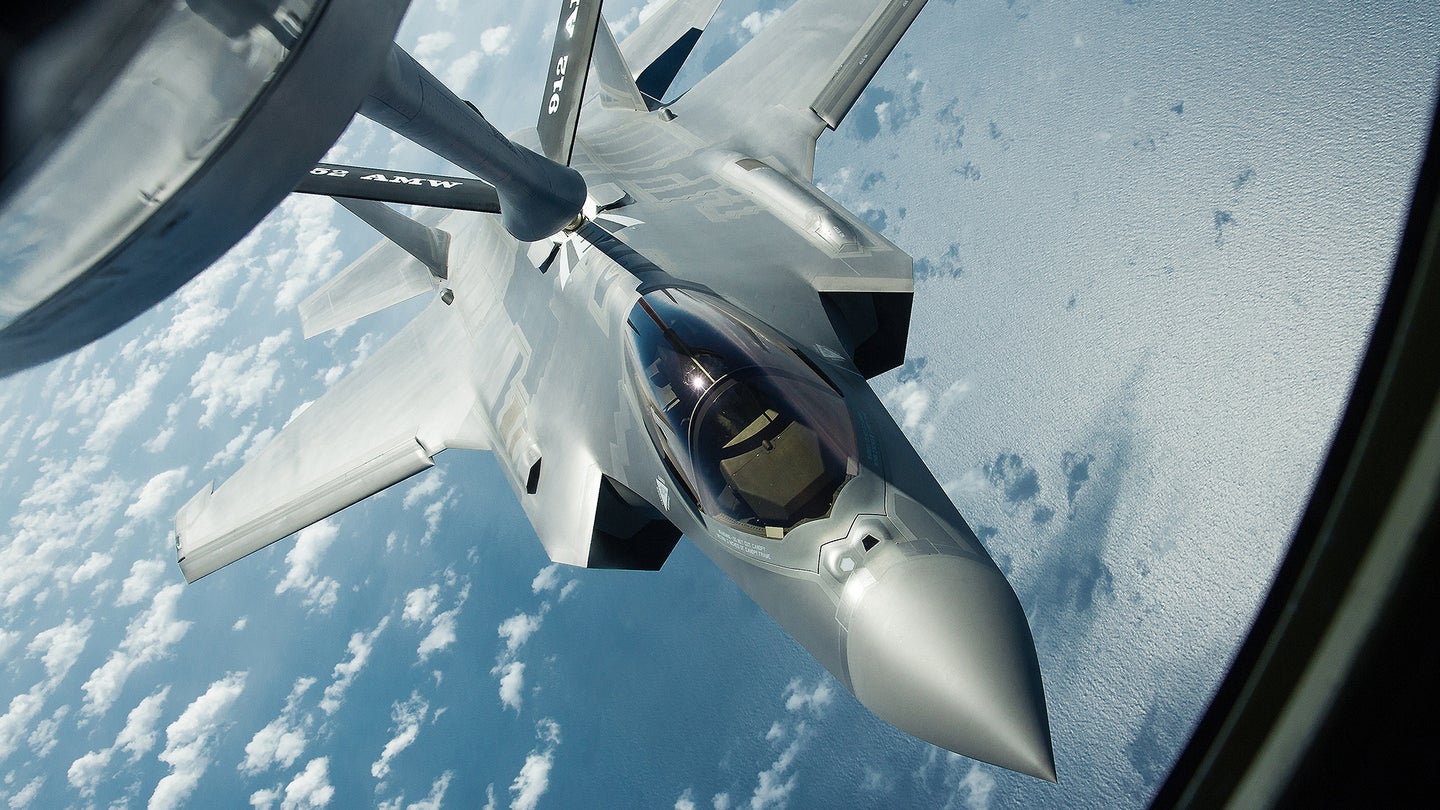 Lockheed Martin is looking at what it would take to give the F-35A Joint Strike Fighter, and by extension Israel's F-35I subvariant, the ability to carry two 600-gallon drop tanks under its wings as part of a larger range-extension study. This would increase their total fuel capacity by approximately 40 percent, though it would negate the jet's stealth qualities. It is possible that similar provisions could eventually become available across the entire Joint Strike Fighter family.

Aviation Week was first to report on the details about the proposed plan on June 13, 2019. Lockheed Martin had originally planned for F-35A to carry 460-gallon underwing drop tanks and the aircraft's inboard stores hardpoints are still plumbed into the jet's fuel system. However, this requirement subsequently got dropped and the Maryland-headquartered defense giant has never certified any Joint Strike Fighter variant to carry drop tanks of any kind. The company is also looking at whether an improved version of the stealthy fighter jet's Pratt & Whitney F135 engine could offer additional range.

“We have had early discussions with various F-35 customers regarding extended-range opportunities,” a Lockheed Martin spokesperson told Aviation Week. “While exact ranges depend on mission profiles, our studies show a significant increase in both range and loiter time – or mission persistence."

It's unclear exactly how much additional range the drop tanks will give the F-35As and F-35Is. At present, the F-35A has a publicly stated unrefueled combat radius of just over 650 nautical miles. All F-35s also have the ability to refuel in flight.

These discussions and engineering studies date to at least Fall of 2018, when The War Zone reached out to Lockheed Martin to inquire about just this issue—whether there were any new plans regarding adding drop tanks to the F-35. In response, they had sent us the following statement:

The F-35, as configured today with internal fuel, exceeds the highly capable specified range performance.  In fact, the F-35As range and loiter time are already greater than most existing 4th generation aircraft when flying identical mission profiles and weapons loadouts, even with 4th generation aircraft using maximum external fuel tanks. This range is the result of the F-35’s superior engine fuel efficiency and significantly reduced aerodynamic drag with internal fuel and weapons carriage compared to 4th generation fighters that require external weapons, sensor pods and fuel tanks for the majority of mission sets.

That said, we have had discussions with customers regarding extended range opportunities to further enable select mission profiles beyond today’s requirement, which can improve operational flexibility and reduce demand on aerial refueling assets. Lockheed Martin, along with government and industrial partners, have completed engineering studies for options to further extend the F-35’s range, which can be accomplished with external tanks, increased fuel efficiency and other opportunities. As a result of the studies, we have strong options should our customers make a decision to add extended range options to their program requirements in the future.

We pushed for more information in subsequent discussions going into the Winter, but there was none available at the time. The fact that the F-35 is as far along in its lifecycle and production run as it is, but still doesn't have a wing tank option had long seemed like a great missed opportunity to us at The War Zone.

Interest from Israel, which flies the F-35I, or Adir, has been a particularly important driver of Lockheed Martin's new range-extension effort, according to Aviation Week. Israeli companies have already been heavily involved in the development of potential drop tank options for the Joint Strike Fighters, as well as conformal fuel tanks.

As noted, Lockheed Martin itself conducted a number of drop tank-related studies between 2004 and 2007. After aerodynamic and stores separation problems with the original 480-gallon design, the company had developed a design for an improved 460-gallon version with a significantly revised shape, which did not ultimately enter service. Since then, as one can see in the statement the company provided to The War Zone, it has touted the F-35's range capabilities without drop tanks, as well as its overall performance without the added drag and weight they would impose.

It's true that the F-35 already possesses a combat radius that is well beyond that of many existing tactical fighters. But since Lockheed Martin stopped work on the drop tanks, there have been persistent questions about whether the internal fuel loads on the Joint Strike Fighter variants are truly adequate or optimal to meet emerging demands, such as the need to reposition the aircraft across long distances on short notice, perform long-range combat missions with reduced tanker support, and conduct persistent operations over permissible air combat environments.

These concerns have been particularly pronounced for the short and vertical takeoff and landing capable F-35B, which has a smaller internal fuel capacity than the F-35A by roughly 30 percent. This only increases the requirements for tanker support and the need to perform additional mid-air refuelings during already challenging long-distance flights and combat operations.

The deployment of 10 U.S. Marine Corps F-35Bs from MCAS Yuma in Arizona to MCAS Iwakuni in Japan in January 2017 is a prime example of the issues at play. It took a total of nine tankers and 250 total mid-air refuelings – 25 per F-35B – to complete the trip, which also included six overnight stops along the way.

Of course, this was in part out of an abundance of caution. The route was based on worst case scenarios to ensure the F-35s would be within range of divert locations, if necessary, due problems with the Joint Strike Fighters, the tankers, weather, or difficulty actually refueling. But it is still a clear indicator of the potential utility of drop tanks for long-range positioning missions.

“So when we plan these things we take the worst winds, we take the worst configuration of the airplane, and we say: at the worst time, what would happen?” U.S. Air Force Brigadier General Scott Pleus, then head of the F-35's integration office, told Aviation Week at the time. “It is very conservative, and the reason why we’re so conservative is because it’s a life or death decision.”

It is certainly true that drop tanks would effectively eliminate the F-35's stealthy characteristics and would have some impact on the aircraft's speed and maneuverability. Jettisoning the drop tanks and their pylons would help recover some of the jet's stealthy profile, though it's not a perfect solution. If precisely engineered, flush-mounted conformal tanks could be another option to extend the fighter's range without completely sacrificing the jet's stealth features.

Still, for countries, such as Israel, which have relatively smaller tanker fleets, relying on the internal fuel capacity of the Joint Strike Fighter alone can have its own direct impact on operational planning. This is one of the reasons why the Israeli Air Force has made it clear that it plans to operate the F-35I alongside various versions of the F-15 Eagle for the foreseeable future. Israel pioneered the use of F-15s for long-range strike missions, which you can read about more here and here, and continues to employ them in this role to this day.

Today, Israel's most worrisome potential opponent is Iran. For the Israeli Air Force, any strikes against targets in Iran would require lots of range with limited tanker support. The F-35s would be least likely to use standoff weapons during these operations in order to take advantage of their advanced survivability features, which would also force them to fly farther to get closer to their targets.

So, it's not surprising that Israel Aerospace Industries (IAI) and Cyclone, a subsidiary of Israeli firm Elbit Systems, continued work on range-extending tanks for the F-35I after 2007. In April 2019, they completed initial design studies on a conformal tank design, as well as the 600-gallon drop tank, according to Aviation Week.

The 600-gallon drop tank is the one Lockheed Martin is now considering working to certify for all F-35As. There is no word on whether the company is or isn't also interested in the conformal design.

Lockheed Martin's renewed interest in drop tanks for the F-35 also comes as the U.S. Air Force, which is the largest F-35A customer, has asked for funds to purchase a number of Boeing F-15X Advanced Eagles. The added range that these aircraft offer over other fighter jets, including the F-35A, is likely a factor in the service's decision to purchase them, which you can read about in depth here and here. The Air Force's F-22 Raptor stealth fighters also have the ability to carry drop tanks for additional range during missions that do not require them to operate in a full stealth mode.

The twin-engine F-15E Strike Eagle, from which the F-15X is derived, can carry around 35,500 pounds of fuel in its ferry configuration with three drop tanks and its conformal tanks attached. The F-35A's internal fuel capacity is almost 18,500 pounds. The two drop tanks would give the Joint Strike Fighters around than 26,650 pounds of fuel in total, roughly 75 percent that of the fully-fueled Strike Eagle. It's unclear what the exact range difference might be in the end, but the single-engine F-35A could likely squeeze a lot of range out with that extra fuel, regardless of the drag and weight penalty they inflict.

Especially when coupled with ever-improving stand-off weapons, including air-launched hypersonic missiles, external fuel tanks could greatly improve the F-35's ability to strike targets at extended ranges. If a conformal tank that does not heavily impact the jet's stealthy characteristics becomes viable, this could give the Joint Strike Fighters even more impressive added capability. Two tanks and a minimal defensive weapons load could allow the F-35 to use its amazing sensor suite in a long-loitering, persistent surveillance and netowrking manner in support of other platforms and the overall combined force, too.

The reality is that drop tanks may simply become a necessity as time goes on. Aerial refueling demands could stretch tanker fleets to their breaking point during a protracted peer state conflict where basing could be pushed out many hundreds or even thousands of miles from enemy or contested territory. At the same time, it is becoming increasingly apparent that non-stealthy tankers will only find themselves forced further and further away from the battlespace as enemy air defenses and other anti-access technologies continue to improve. Operating from austere fields and remote locales without any tanker support at all is also a potential reality.

Giving the F-35 community the option to carry external fuel tanks makes so much sense. It's not that the aircraft needs them due to some deficiency, but it will make the good range performance the jet already possesses even better under a wide array of circumstances. Considering that so far F-35s fly combat sorties with external stores more often than not, slapping on some tanks is even more logical as stealth isn't even an issue. Doing so will provide the jets more time over the battlefield for missions such as close air support and reduce their reliance on heavily tasked tankers.

Now that the F-35 is here to stay, we need to make the very most out of it. It has to work with reasonable reliability and be as flexible as possible as quickly as possible if it is to soon become the backbone of American and allied tactical airpower. This means investing more money in upgrades and enhancements, not less. Getting external tanks to the fleet should be an important part of this process.

With all this in mind, there might come a time in the not-so-distant future where it is not uncommon to see F-35As and F-35Is—and possibly all of the F-35 variants—with external or even conformal fuel tanks and the F-35 program as a whole will better off for it.