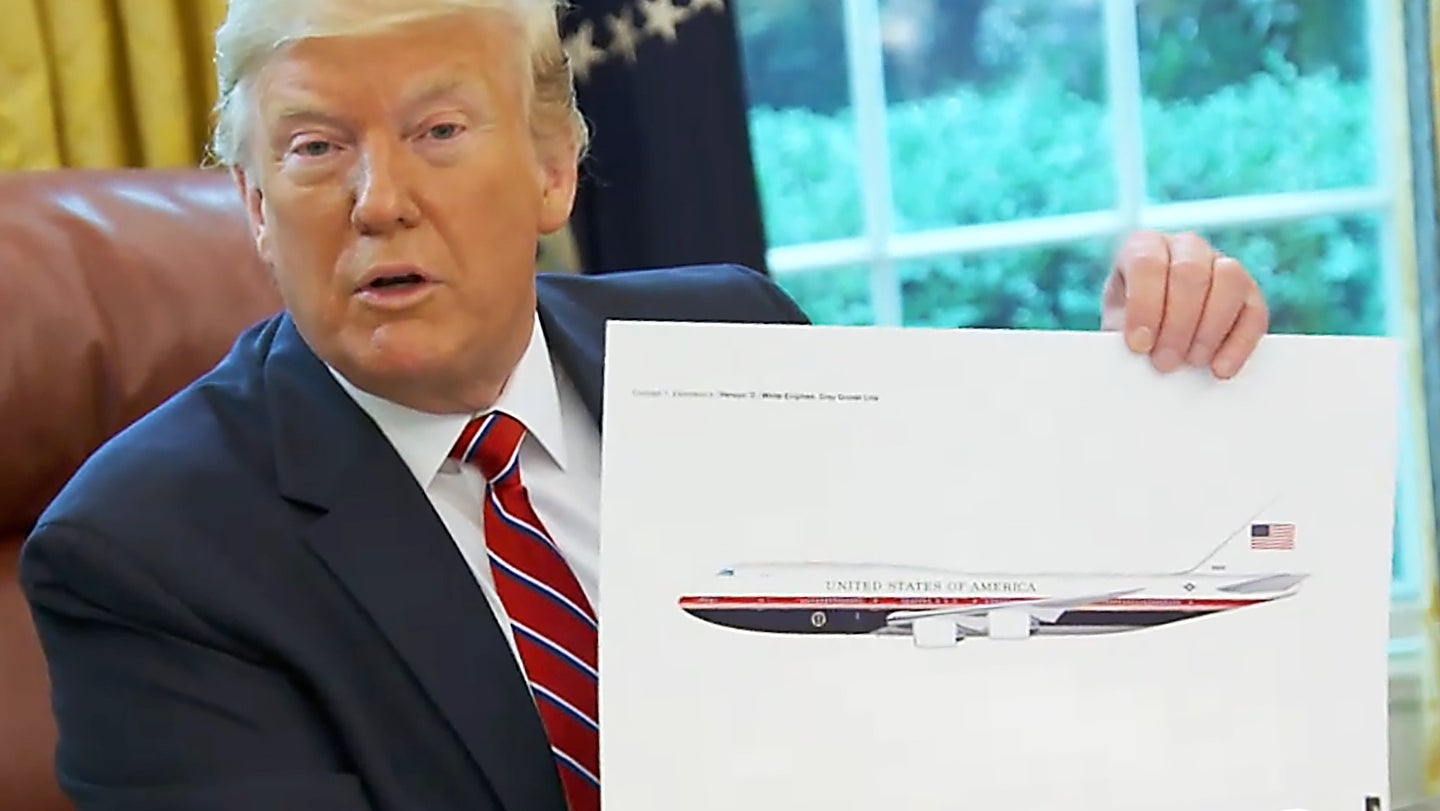 ABC's George Stephanopoulos has been paling around with the President for a couple of days and part of their time together included Trump showing him, and ABC's cameras in the Oval Office, his long-touted and much preferred new Air Force One paint job. Air Force One flight crews were also in the room for the big moment. The livery could end up on two 747-8is that are currently undergoing conversion into VC-25B presidential aircraft in San Antonio, Texas.

The paint job looks to be a navy blue belly with a red stripe and a white upper fuselage, as well as similar seals, flags, and text as the iconic and historic livery currently worn by the two VC-25As that serve as Air Force One. You can read all about the history of the paint job, and my take on why it should absolutely not be changed, in this previous article of mine.

The livery actually looks vaguely similar to the one worn on his personal 757-200 and his helicopters. Beyond that, it is reminiscent of those previously used by TWA, U.S. Airways and even British Airways, to name a couple off the top of my head.

It's actually pretty conservative, but I can't imagine many will be excited or pleased about trading that for the largely beloved look Air Force One aircraft have sported since the Kennedy Administration. That paint job makes Air Force One the most recognizable aircraft on the planet and an easily translatable symbol of American ingenuity and might. Key members of Congress seem to agree.

As we stated just two days ago in a piece about the Air Force One replacement aircraft's dwindling requirements and rising costs:

"Recently, members of the House Armed Services Committee inserted language into a draft version of the annual defense policy bill, or National Defense Authorization Act, for the upcoming 2020 Fiscal Year, which would block changes to the paint scheme, as well as the interior design, without Congressional approval. It remains to be seen whether these clauses will make it into any final version of the NDAA and if that bill becomes law.

At present, the Air Force says that no decision on the paint scheme will occur until 2021, which is notably after the next presidential election. A new president could direct further changes in the program. The service only expects Boeing to delivery the first VC-25B in September 2024, which would be just four months before Trump would leave office if he wins a second term. The Selected Acquisition Report says that the White House is pushing to move this date up to December 2023, according to Bloomberg."

Trump appears to have put a lot into this and is probably willing to fight with Congress over the future look of the plane. Now that the drawings have been shown on TV, the White House may release them in full detail. We will be sure to post them if they do.