More than six decades after Bell introduced the world to the very first version of its famous UH-1 Huey helicopter, variants and derivatives of this iconic design continue to serve governments and fly commercially around the world. But not all of these subsequent helicopters have been as successful or become as well-known as their progenitor. Case in point, the Bell 214ST, with its stretched, bulged fuselage, which makes it look something like the offspring of a Huey and Sikorsky UH-60 Black Hawk. Bell developed specifically for the Iranian military, but which never entered service in that country and has since become popular with contractors that often work for the U.S. military.

The Bell 214ST first flew on July 21, 1979, at the company’ s Dallas-Fort Worth facility. Two years earlier, the company had flown an experimental helicopter derived from the earlier Bell 214, which showed much more of its Huey lineage. As time went on, the design not only increased in length by 30 inches compared to the previous model, but saw significant changes to the central fuselage and nose. It also gained an entirely recontoured upper exhaust and tail.

Two General Electric CT7-2 turboshafts, each one generating 1,625 shaft horsepower, powered the 214ST. The CT7 series, also known as the T700 series, is still extremely popular today and variants are found on a wide array of commercial and military helicopters, including Bell's own UH-1Y Venom and AH-1Z Viper, as well as the UH-60 Black Hawk and AH-64 Apache gunship.

The engines made the 214ST significantly more powerful than the existing twin-engine UH-1N Twin Huey variant, and its commercial cousin the Bell 212, which used the Pratt & Whitney Canada PT6T Twin-Pac, a turboshaft that consists of two PT6s linked together to generate a combined 1,250 shaft horsepower. The 214ST also had multiple then-state-of-the-art automated flight systems to improve handling.

“Basically, the 214ST is the 214 heavy lifter with a stretched cabin, two GE CT7-2 engines replacing the single Lycoming LC4B, a strengthened transmission passing rather more horsepower, new plastic [fiberglass] rotor blades and Noda-Matic suspension,” Mark Lambert wrote in an article in Flight International magazine in June 1979, ahead of the first flight. “The result is a new twin with exceptional hot-and-high capability and good single-engined performance.”

More than 3,000 pounds heavier than the UH-1N, the 214ST had a maximum takeoff weight nearly 5,000 pounds greater than its smaller twin-engine cousin and a faster cruising speed of 140 knots. The stretched cabin could accommodate 20 individuals in greater comfort than the maximum of 15 people who could ride in the rear of a Twin Huey. The new helicopter was powerful enough to hover with a total weight of 12,400 pounds at sea level while running on just one engine. It also had a one-hour run dry transmission and elastomeric rotorhead bearings for improved reliability and safety.

As Lambert noted in his Flight International piece, the origin of the 214ST is inseparable from that of the Bell 214, which first flew in 1970. Originally marketed as the Huey Plus, the 214 was itself a variant of the earlier Bell 205, also known to the U.S. military and others as the UH-1H.

While both the 205 and 214 are single-engine helicopters, the latter is instantly identifiable due to its much larger engine housing and exhaust. The Huey Plus replaced the older Huey’s Lycoming T53-L-13 engine with a much more powerful Lycoming T55-L-7, the same engine found on early models of the CH-47 Chinook. The 214 also had wider chord rotor blades than the 205 and the Noda-Matic suspension and improved rotorhead found on the later 214ST. The latter features help dampen vibrations, which in turn would make for a smoother flight and reduce wear and tear on the airframe. All of this, combined with the larger engine, gave the helicopter much better hot-and-high performance than its predecessor.

With its significantly improved performance and capabilities well suited to deserts and mountainous terrain, the 214 had grabbed the eye of the Shah of Iran. He subsequently signed an order for nearly 300 214A models for the Imperial Iranian Army, with production starting in 1972. The Imperial Iranian Air Force received a smaller number of 214Cs, which featured a rescue hoist and other features for use in the search and rescue mission. A small number of 214s served in the militaries of Ecuador, Oman, and the United Arab Emirates, as well.

Between 1974 and 1975, Bell then began development of the 214ST specifically to meet Iranian requirements for an even larger, more capable military transport helicopter. Iran had picked Bell’s offer over France’s Aérospatiale Puma and the British Westland Wessex, the latter being a license-produced turbine-powered derivative of the Sikorsky S-58.

The Shah and Bell had also agreed to eventually establish domestic Iranian production of the Bell 214A and C in the city of Isfahan. This agreement later expanded to include plans to build the 214ST in Iran, as well.

But while Iran did receive hundreds of 214A/Cs, it never got a single 214ST and the Iranian factory never came to be. Protests beginning in 1978 eventually evolved into an open revolt in 1979, with the Shah’s government collapsing entirely in February of that year. The Ayatollah Ruhollah Khomeini, a prominent Shia Islamic cleric, subsequently led a movement that took control and established the new Islamic Republic of Iran.

Tensions with the United States, which had orchestrated the Shah’s rise into power in the first place in 1953, eventually boiled over and resulted in the infamous hostage crisis, where Iranian revolutionaries stormed the U.S. Embassy in Tehran and held 52 Americans captive for more than a year. Though the U.S. government secured the release of the hostages in January 1981, the United States had, by that time, broken off relations with Iran over the hostage-taking and the two countries have remained at odds ever since. Iran continues to fly its 214A/Cs and has developed indigenous supply chains to keep them going.

Blocked from completing its helicopter deal with Iran, but having already completed the bulk of the work on the 214ST with financial help from the Shah’s government, Bell finished development of the helicopter and marketed it alongside the 214B BigLifter, the commercial version of Iran’s 214A.

Available with skids or fixed wheels, Bell pitched the 214ST, also first as the Stretched Twin and then as the Super Transporter, in various civilian roles. These included executive transport, forest fire fighting, and supporting offshore oil rigs, logging operations, and other remote commercial enterprises. 214STs, along with 214Bs, continue to perform these types of duties to this day, though in relatively small numbers compared to other Huey variants derivatives.

Bell did continue to offer the 214ST as a military transport, as well. It has seen very limited military service in countries such as Brunei, Peru, Thailand, and Venezuela over the years.

In one of life’s little quirks, the largest military operator of the 214ST turned out to be Iraq, which took delivery of nearly 50 of the helicopters during the 1980s and flying them during its brutal war with Iran. The U.S. military would capture one of these during Operation Desert Storm in 1991.

The U.S. Army did conduct airworthiness testing of the 214ST in the 1980s, but “the helicopter is a commercial aircraft and was not designed for U.S. military use or compliance with U.S. military specifications,” a final test report made clear. “The adequacy of the BHTI [Bell Helicopter Textron, Inc.] 214ST helicopter to perform as a military aircraft should not be inferred from the results of this evaluation.”

Bell had previously proposed the Model 240, which also used two T700 engines, for the Army for its Utility Tactical Transport Aircraft System (UTTAS) program in 1972. The company also pitched the idea of product improved version of the UH-1H helicopter, sometimes referred to as the UH-1H+. The service decided to go in a different direction and selected what would become the Sikorsky UH-60 Black Hawk as the winner of the UTTAS competition in 1976.

But the 214ST has had something of a U.S. military adjacent career with contractors supporting various American operations around the world, including in Afghanistan, the Philippines, and Uganda, primarily moving cargo and personnel to and from remote outposts. One of the most prominent operators of these helicopters in this role was Evergreen Helicopters. In 2013, Erikson, Inc. bought Evergreen and has continued to work with the U.S. military, among other customers.

This company 214STs have notably supported U.S. military activities in Niger, subcontracted to another firm, Berry Aviation. One of these helicopters helped recover the body of U.S. Army Sergeant LaDavid Johnson after the now infamous ambush of American troops near Tongo Tongo in October 2017, an incident you can read more about here and here.

The U.S. Department of State’s Air Wing also flies 214STs. Officially known as Bureau of International Narcotics and Law Enforcement Affairs’ Office of Aviation, which you can read about in depth here, this is organizations is one of the largest U.S. government aviation arms outside the U.S. military.

All told, despite its limited production run, which ran from 1981 until 1993, during which Bell built some 96 examples, the 214ST’s impressive capabilities have kept the helicopters in very active service in many parts of the world, including continued involvement in military operations. Until Bell introduced the 525 Relentless in 2012, the 214ST was the largest helicopter the company had ever made.

It’s certainly been an interesting life for a design originally meant specifically for Iran, a customer that then never flew a single one of the helicopters. By every indication, the 214STs will still be thump thump thumping their way through the skies for years to comes. 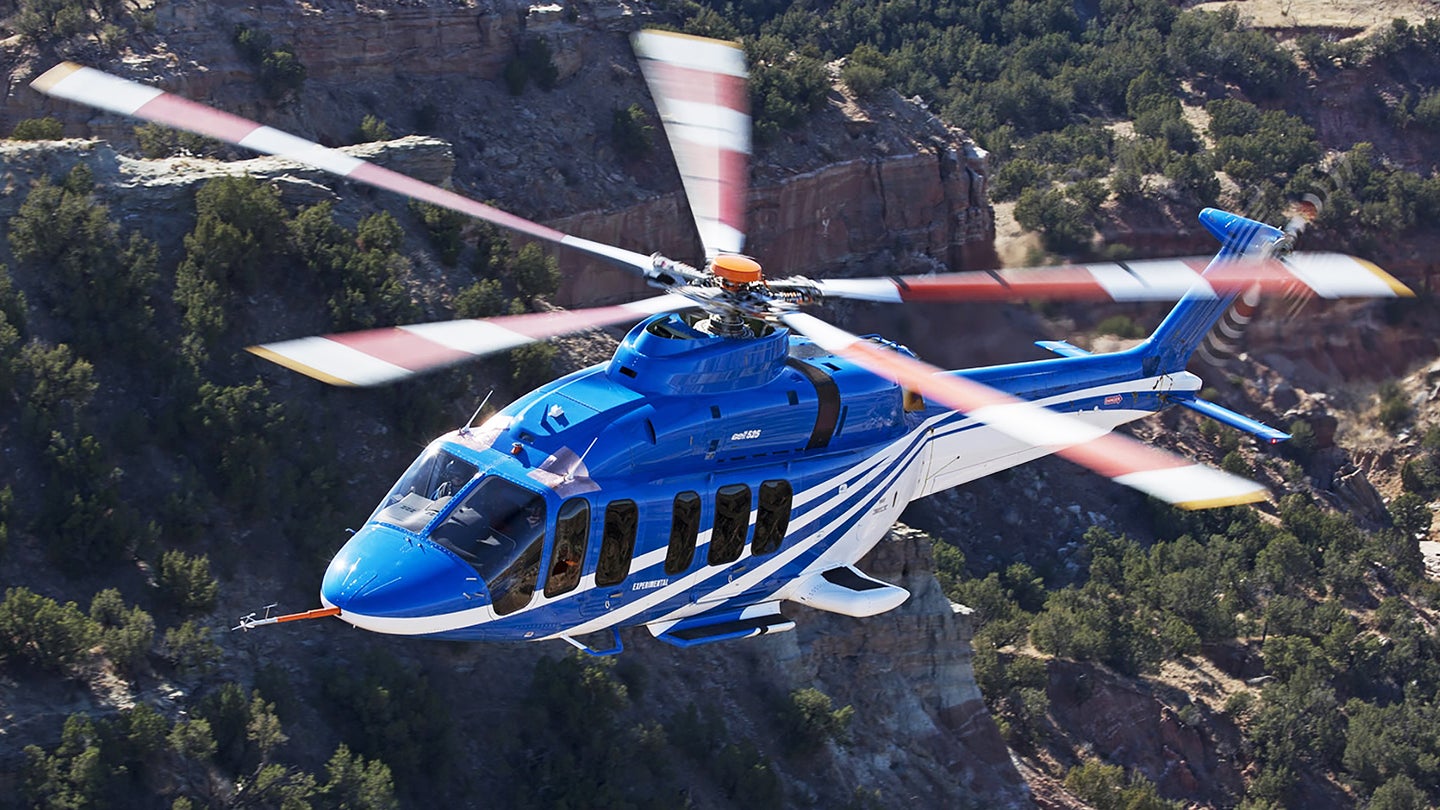 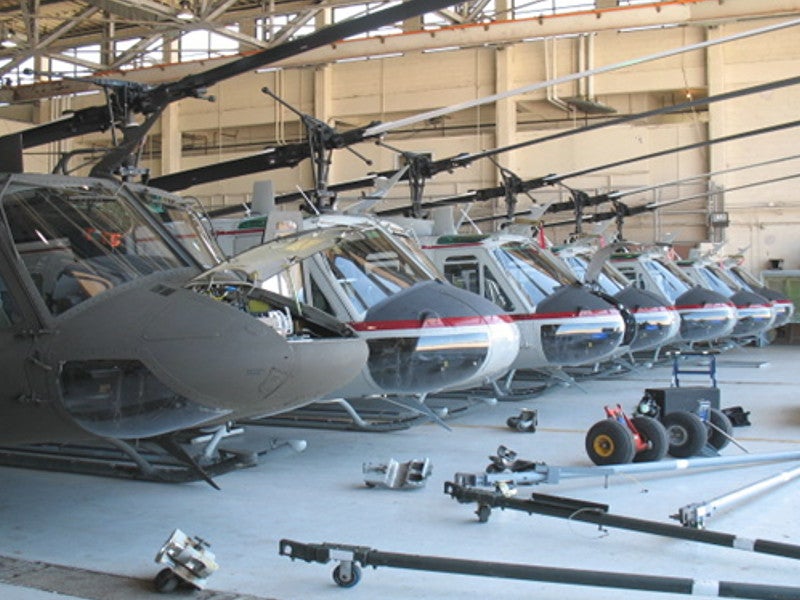 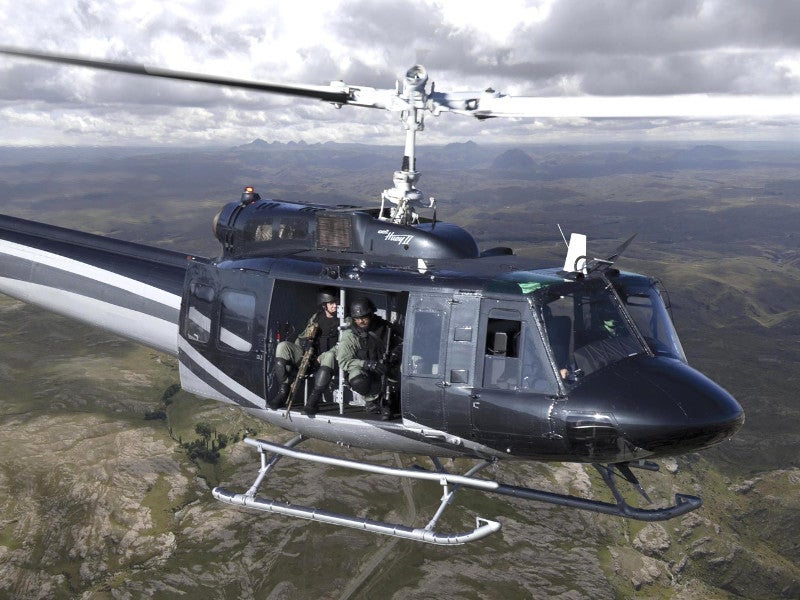