President Trump and Secretary of Defense Shanahan have denied knowing anything about the plan and nothing seems to have actually happened in the end. 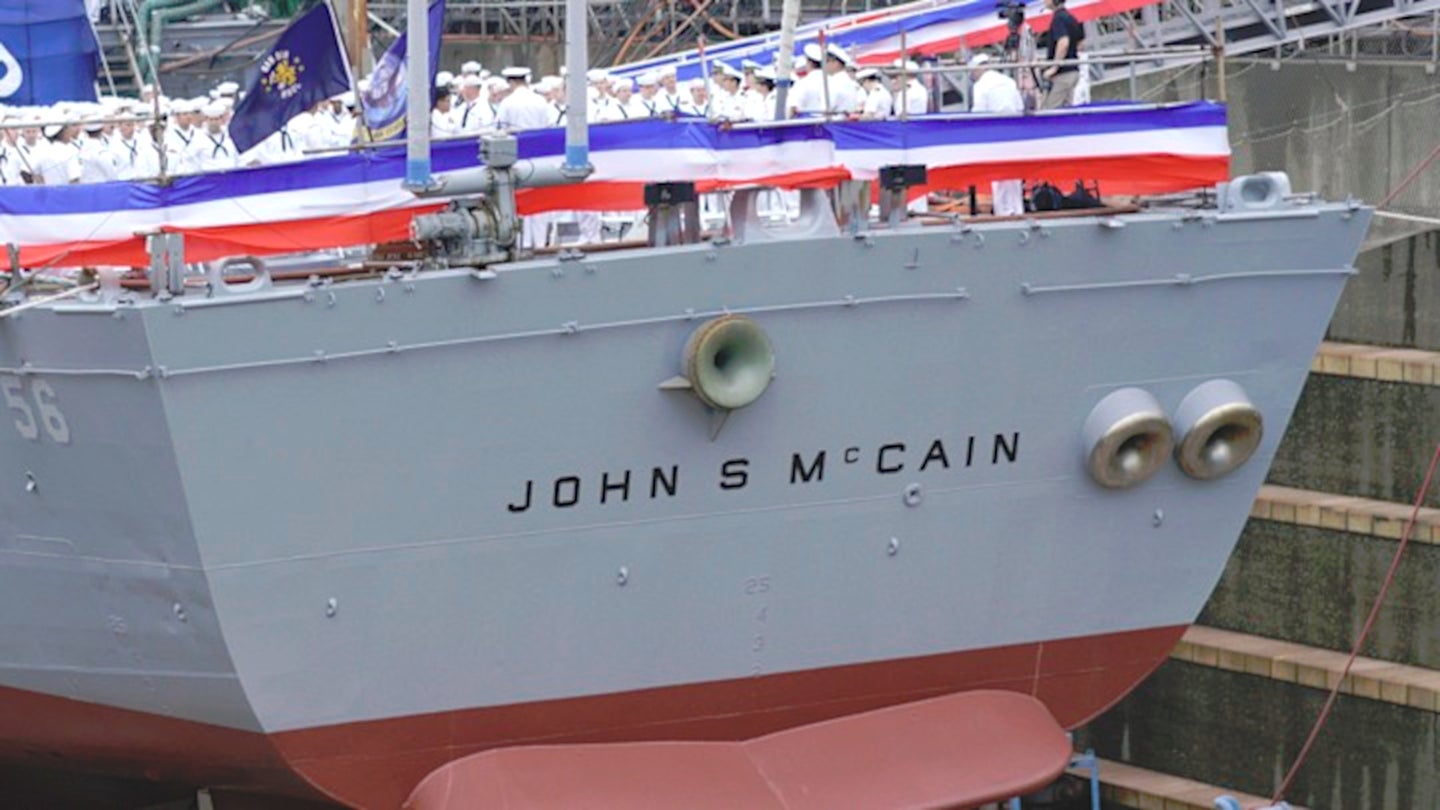 Certain details remain murky, but what is clear is that White House and U.S. Navy officials discussed moving the Arleigh Burke-class destroyer USS John McCain "out of sight" during President Donald Trump's recent visit to the American naval base in Yokosuka, Japan. Trump's staff was reportedly worried that the presence of the ship would incite the President's ire given his long-standing animosity toward one of the ship's namesakes, the late Senator John McCain. There is zero evidence that President Trump had any knowledge of the request. In addition, at this time, there is little to no information as to where the idea originated from or how it was dealt with over time aside from the final result that nothing seems to have come of it at all.

The Wall Street Journal was first to report on the attempts to either hide or move the McCain late on May 29, 2019, citing leaked emails and comments from unnamed officials. The day before Trump had made a speech on board the first-in-class amphibious assault ship USS Wasp at Yokosuka. This followed remarks the President had made alongside Japanese Prime Minister Shinzo Abe during a visit to the Japanese Maritime Self-Defense Force's carrier the JS Kaga.

"Need all supporting units to understand the requirement for rehearsals [for the President's visit]," a published email read. "Also, please confirm #3 will be satisfied."

The third requirement was "USS John McCain needs to be out of sight."

It is important to note that, so far, nobody in the Defense Department or the White House has denied that this request occurred or challenged the authenticity of the leaked email. We also don't have any further correspondence showing how the discussions proceeded or who exactly sent this one email and who exactly received it.

There were also reports that sailors had obscured the ship's name on the stern with a tarp. The Navy has denied this, saying that a picture of the McCain with its name obscured was taken on May 24, 2019, and claims it was part of routine repainting. The service also went so far as to issue an official statement to this effect through the Navy Chief of Information Twitter account. Before the Journal's report broke, this account had not posted a single Tweet since Jan. 11, 2014.

"The name of USS John S. McCain was not obscured during the POTUS visit to Yokosuka on Memorial Day," the Tweet read. "The Navy is proud of that ship, its crew, its namesake and its heritage."

The Navy has also denied reports that the McCain's crew specifically got the day of Trump's speech off or that the ship's sailors were specifically told not to wear caps bearing its name. The service says all of its personnel at Yokosuka received a 96-hour leave around Trump's visit and that everyone had to wear eight-point caps during the President's remarks. In addition, officials said no one had gotten orders to avoid the event on Wasp, though this would not necessarily preclude informal suggestions from certain officials that sailors from McCain stay away.

Once again, the service has not denied that there were discussions about relocating the McCain or covering the ship's name for Trump's visit. Anonymous Navy officials have since told multiple outlets that White House staffers, including members of the White House Military Office (WHMO), and "lower level" naval officers had been working toward this end. The WHMO coordinates military support to the White House, including presidential air and ground transportation. It also provides aides to carry the "nuclear football" containing secret codes and a secure communications system and keep close to the President at all times, so they can order a nuclear strike from anywhere, if necessary.

According to these reports, which have not been refuted, the main reason White House officials wanted the ship somewhere else was reportedly a fear that Trump could end up enraged if he saw it. Trump had a notoriously poor relationship with the late Senator, dating back to before he became president. In 2015, the presidential candidate Trump infamously insulted McCain's service record, saying "He's not a war hero. He's a war hero because he was captured. I like people that weren't captured."

Months after McCain's death, Trump regularly takes jabs at his memory. Recently, he has begun slamming the late Senator over his role in killing a Republican healthcare plan to replace the Obama-era Affordable Care Act, better known as Obamacare. Clearly, the White House staff is fully aware of the President's issues with the late Senator.

So, "there was a lower level effort to comply with the request [to hide the ship] but when leadership became aware they ordered the tarp be taken down," one unnamed Navy official told ABC News. "Navy leadership decided the name should not be obscured."

It remains unclear whether or not the ship was moved in any way or if other objects were placed in front of it in response to those discussions before Navy leaders overrode the plans. The McCain is presently forward deployed to Yokosuka, Japan as part of the Navy's 7th Fleet. The ship suffered a now infamous collision in August 2017 that resulted in the deaths of 10 sailors. The incident, coupled with another involving the USS Fitzgerald, another Arleigh Burke, two months earlier, prompted a major internal review of naval operations that exposed a host of serious issues.

It is also unclear where exactly the request to stash the McCain away originated. President Trump has denied knowing about the plans at all and there is no evidence to suggest he was involved directly.

"We'll probably find out who did they thought they were doing me a favor because they know I'm not a fan of John McCain," Trump told reporters on May 30, 2019. "I couldn't care less whether or not there's a boat named after his father."

It is important to note that when the Navy commissioned McCain in 1994, she was not named after Senator John McCain, but for his grandfather and father, John McCain, Sr. and John McCain, Jr. In July 2018, the service officially added John McCain III to the ship's namesakes. The senator passed away the following month.

"I was not informed about anything having to do with the Navy Ship USS John S. McCain during my recent visit to Japan," Trump had also Tweeted out the day before after the Journal published its initial story. "Nevertheless, @FLOTUS and I loved being with our great Military Men and Women – what a spectacular job they do!"

Acting Secretary of Defense Patrick Shanahan has already denied knowing anything about the discussions. Shanahan, who is presently in Singapore, said he only learned about the incident when he woke up to the latest news.

"I would never dishonor the memory of a great American patriot like Senator McCain," he told reporters on May 30, 2019. "I also think it's important – I'd never disrespect the young men and women that crew that ship. I've asked my chief of staff to look into the matter."

The incident raises obvious concerns about activities that could politicize the military and that White House staffers are making these sorts of requests at all, with or without Trump's knowledge. The U.S. military takes great pains to remain apolitical and avoid conflicts of interest in this regard.

With outrage still building over the attempt to conceal the McCain from Trump, it certainly behooves the Pentagon and the Navy to determine the exact chain of events, do so quickly, and set the record straight for good. But as it sits now, all we know for sure is that this was a request from White House staff that got turned down by the Navy's chain of command and that is where it appears to have ended. Anything else is conjecture.