The Air Force is still assessing the full scope of the damage to the critical base in Ohio. 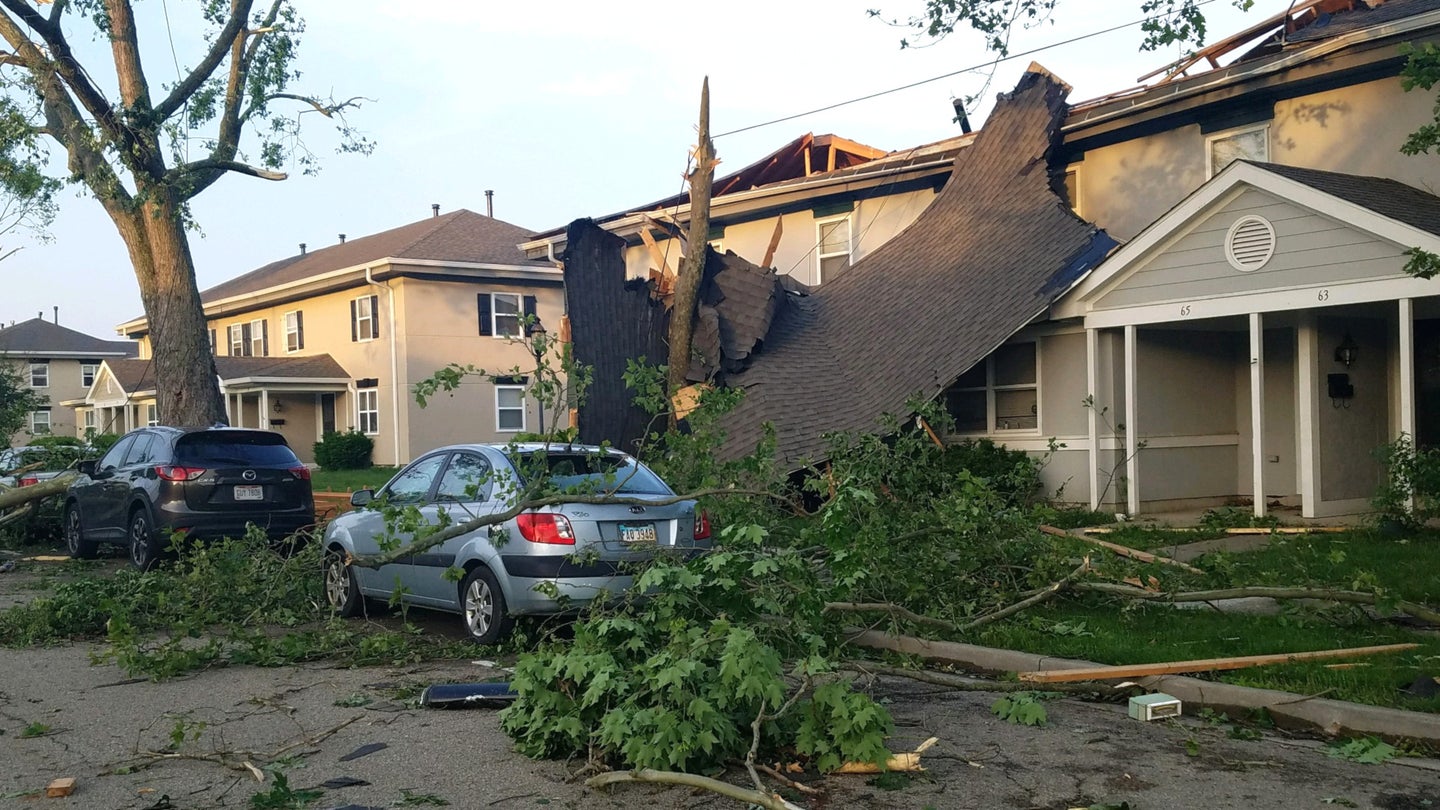 A tornado and other associated severe weather tore through the Dayton, Ohio area overnight, which is home to the U.S. Air Force's Wright-Patterson Air Force Base, damaging dozens of houses in one of the base's residential areas. There is no word yet on any damage, or the extent thereof, to other parts of the base, which is home to Air Force Materiel Command, the 445th Airlift Wing and its C-17 transport aircraft, the Air Force Research Laboratory, the National Museum of the Air Force, and much more.

The first reports that a tornado might have touched down on or near Wright-Patterson began to emerge around 11:15 PM local time on May 27, 2019. As The War Zone

noted initially, the storm in the Dayton area was part of a larger weather system throughout the midwest, which ultimately generated dozens of tornados across multiple states, including six in Ohio.

The damage to communities near Dayton was reportedly among the most severe, with the tornado, along with driving rain, generally high winds, and large hailstones leaving thousands now left without power. Thankfully, there are no reports of any fatalities at present and there have only been a small number of minor injuries.

The Air Force has so far only disclosed that approximately 150 homes within the base's Prairies at Wright Field housing area suffered damage and causing one minor injury. The base's public affairs office released the images below:

The Air Force also released the following official statement regarding the damage at Prairies at Wright Field:

"Approximately 150 homes in the Prairies at Wright Field housing area were damaged, some significantly, during the storm that passed through the Dayton area late on May 27.

"There has been one minor injury reported at this time.  Base emergency response crews are expected to continue damage assessments throughout the day.  More damage reports are expected as light improves and personnel report to duty.

"The Prairies Child Development Center and Youth Center will be closed May 28.  Crews will assess damage to those facilities to determine when they can reopen.

"Damage to facilities on Area A and Area B appears to be minimal at this time.  The base will be open for normal duty operations.  Any personnel adversely impacted by the storm and unable to report for duty should contact their individual supervisor, first sergeant or commander.

"Personnel who live in base housing and sustained personal property damage as a result of the storm may be able to file a claim with the Air Force after first filing a claim with your renters or vehicle insurance.  Ensure you document the damage to substantiate your potential claim.  For further information contact the Base Legal Office at (937) 257-6142."

Though the base remains open, it is unclear if any other areas suffered significant damage, as well. The tornado reportedly hit the National Museum of the Air Force, which is situated roughly a mile and a half southwest of the main base. On May 28, 2019, the Museum announced that the Early Years Gallery, which has displays covering the beginnings of U.S. military aviation, including a reproduction of a Wright Brothers 1909 Military Flyer, the first heavier-than-air military flying machine ever, would be closed for repairs.

Hopefully, the total damage to Wright-Patterson will turn out to be relatively minor. The Air Force is still recovering from two other serious weather-related disasters. In October 2018, Hurricane Michael devastated Tyndall Air Force Base in Florida, while flooding earlier this year left half of Offutt Air Force Base in Nebraska temporarily underwater. The service is already asking for billions of dollars in emergency funding for repair efforts and it expects that it will take years to complete that work.

There is another good indication that the majority of the base escaped the weather largely unharmed. Russia's Tu-154M-ON Open Skies aircraft left Moscow earlier on May 28, 2019, and is headed to Wright-Patterson. From there, it will fly a number of surveillance missions over the United States under the Open Skies Treaty, which you can read about in more detail here and here. The storms do not appear to have upset those plans.

The National Museum of the Air Force has now confirmed that it did suffer minor damage in the storm, but has also said that no aircraft or artifacts were damaged, according to Military.com reporter Oriana Pawlyk.