This is the latest in a string of incidents within the Air Force’s ballistic missile force, which has suffered from notoriously low morale. 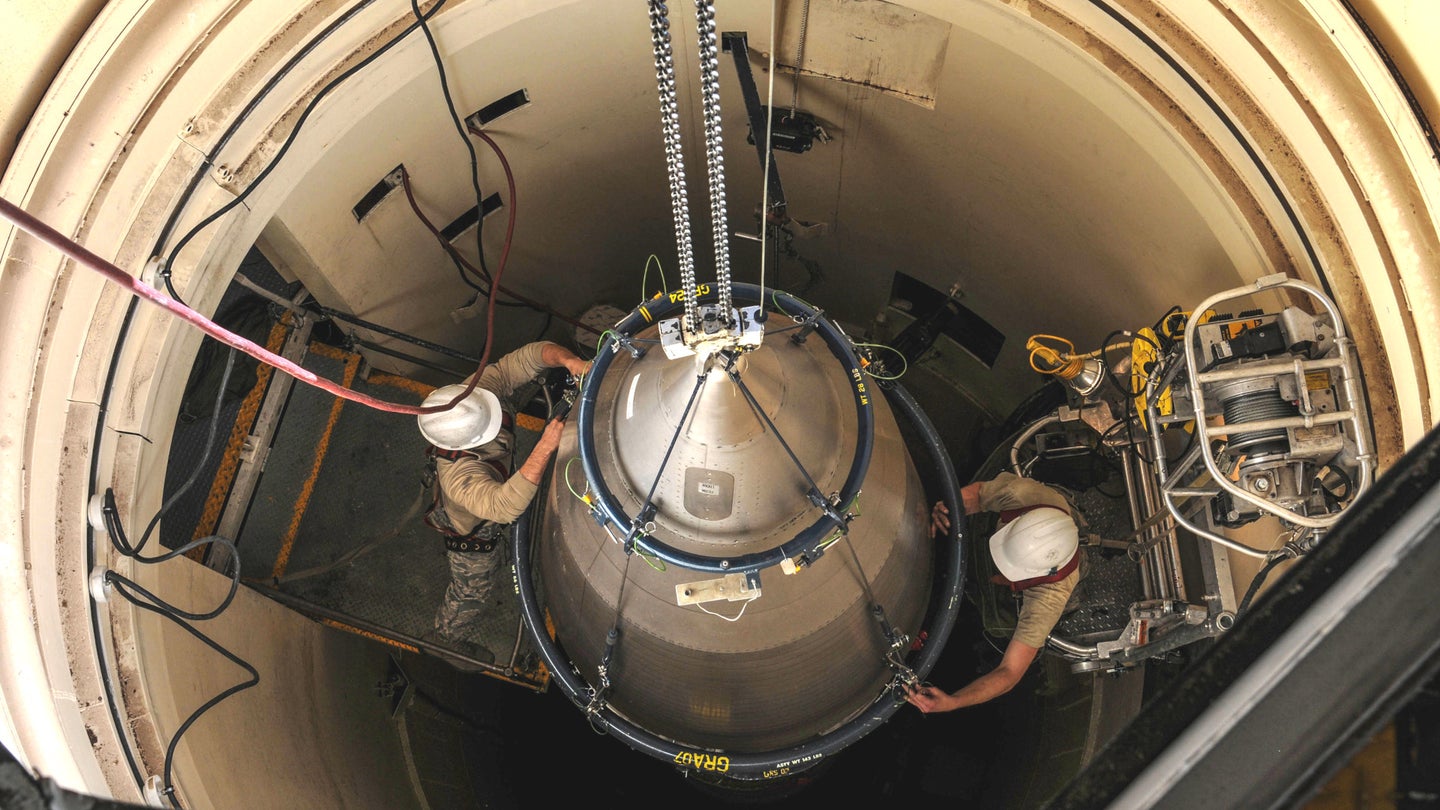 The U.S. Air Force has slapped a pair of airmen with administrative punishments after discovering they were drinking inside a missile alert facility at F.E. Warren Air Force Base in Wyoming. The base is home to some 150 LGM-30G Minuteman III nuclear-armed intercontinental ballistic missiles, one of three ICBM fields that make up one leg of the United States' nuclear deterrent triad.

Task & Purpose got confirmation from the Air Force that the incident had occurred on May 14, 2019. Yesterday, an anonymous post citing an unnamed source on the popular unofficial Air Force amn/nco/snco Facebook group claimed that three airmen from the 90th Maintenance Group had been involved in the incident at F.E. Warren's Hotel Missile Alert Facility, but if that was the case only two of them have received formal disciplinary actions.

"It appears there's a running joke on the base about the incident and they even have memes going around which were sent for us to post," the Facebook post, which you can read in full below, said. "They have deemed PBR as the Official beer of the 2019 Nuclear Missile Code Change at F.E. Warren AFB."

Joseph Coslett, the head of operations at the public affairs office for the 90th Missile Wing, which includes the 90th Maintenance Group and is the main unit at F.E. Warren, denied to Task & Purpose that the drinking had occurred during a change over in the nuclear codes at the alert facility, which happens regularly for security reasons. "An investigation, including admission by the airmen, revealed the two consumed the alcohol while in an off-duty status and were not in contact, nor had any access to weapons or classified material," he said in a statement.

It is possible that the drinking occurred around a code change, even if the individuals in question, a staff sergeant and a senior airman who the Air Force have not identified, did not have access to weapons or classified material at that exact time. The individuals were reportedly found drinking in an exercise room while "resting overnight" at the alert facility, which could have occurred after the reported nuclear code change.

Staying overnight at the alert facility is not uncommon for personnel assigned to the Air Force's missile wings. In order to force potential opponents to expend a significant number of their own nuclear warheads if they want to try to destroy the Minuteman fields, such as the one at F.E. Warren, a questionable concept that has led to the nickname "America's nuclear sponge," alert facilities and their associated silos are spread out over an extremely wide area. As such, it can take up to between three to four hours in certain cases to drive from the main portion of the base to certain alert facilities.

Nuclear code changes at Minuteman bases are themselves a lengthy affair, which can take hours to complete even with an improved coding system Air Force missile units began using in 2017. You can read more about the code change process and the systems involved here.

Regardless, the Air Force expressly prohibits drinking, even for individuals in an off-duty status, within missile alert facilities. This certainly seems like an entirely reasonable thing to do at a site responsible for controlling a dozen nuclear-armed missiles. It is still important to note that the actual underground launch control center is heavily segregated from other areas of a Missile Alert Facility.

"This is not a laughing matter," Air Force amn/nco/snco Facebook stressed. "In fact, the last time there was an incident during a Nuclear Code Change, there were investigations and changes in leadership."

F.E. Warren's leadership is clearly of the same view as that anonymous poster. "This is an unacceptable breach of standards and the Air Force held the airmen accountable for their actions," Coslett, the base's top public affairs official, told Task & Purpose.

Unfortunately, it's hardly the first time the Air Force's missileers have gotten in trouble over failing to adhere to procedures during nuclear code changes or received punishments over the use of various intoxicating substances. The Air Force amn/nco/snco Facebook group noted that in 2008, three officers at F.E. Warren fell asleep without first securing a system containing old nuclear launch codes. This latest boozy incident also comes less than a year after the Air Force acknowledged it had disciplined 14 airmen assigned to the 90th Missile Wing for using LSD, cocaine, and other drugs on various occasions between 2015 and 2016.

All of this follows a string of particularly damning incidents within the Air Force's missile units in 2013 and 2014, including the discovery of widespread cheating on proficiency tests among missileers at Malmstrom Air Force Base in Montana. In October 2013, the service had also relieved Major General Michael Carey from command of the 20th Air Force, which is also headquartered at F.E. Warren and is in charge of the entire Minuteman III force, over drunken escapades in Russia during an official visit. This included fraternizing with two unvetted foreign national women, an obvious security risk.

This all prompted a major review of conditions within the missile force that uncovered worryingly low-morale among individuals who often saw assignments to Minuteman III units as a "dead-end career." It would seem that there is still something of a worrisome atmosphere within the ICBM community.

Maybe its an even better time than we already think to reconsider whether the ICBM force is necessary at all, especially as the U.S. government looks to spend more than $100 billion to buy new missiles and to update the associated infrastructure that will support them.