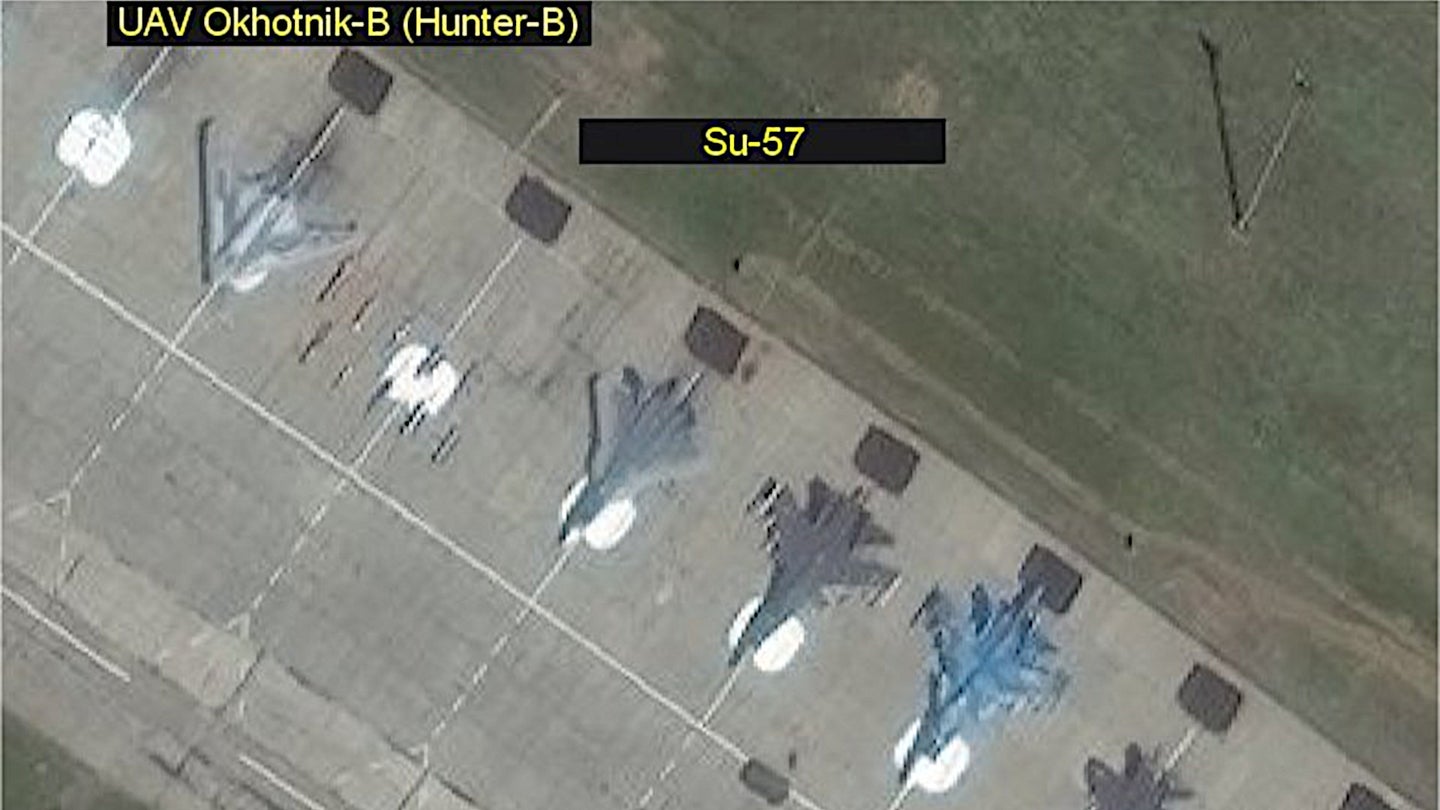 Satellite imagery has confirmed The War Zone's initial assessment of Russia's S-70 Okhotnik-B, or Hunter-B, unmanned combat air vehicle is very large, with a wingspan greater than that of an Su-34 Fullback combat jet. The image, which appears to have been from around the date of Russian President Vladimir Putin's recent trip to the 929th Chkalov State Flight-Test Center, also shows an array of stores on display next to the drone.

Putin visited Chkalov, which is situated in Russia's southwestern Astrakhan region, on May 14, 2019, arriving with an escort of six Su-57 advanced combat jets. The satellite image of the flight line at the test center subsequently appeared on social media, showing the unmanned combat air vehicle (UCAV) next to an Su-57 and other aircraft, including an Su-34, a MiG-29, and multiple Sukhoi Flanker variants. The new imagery does seem to show that the drone has a new paint scheme, which might indicate that it is a more refined design or a second prototype, but official Kremlin statements did confirm that the Russian President got a chance to see the Okhotnik-B.

Those other aircraft give a more accurate sense of the Okhotnik-B's scale. Other images that emerged online in January 2019 had shown a large aircraft tug towing the drone at what appeared to be Sukhoi's Novosibirsk Aircraft Production Association plant, which is in Russia's Siberian province of the same name. At that time, The War Zone assessed that the UCAV appeared dimensionally similar to Northrop Grumman's X-47B, which is 38 feet long and has a wingspan of 62 feet.

From the satellite imagery, seen at the top of this story and below, it is safe to say that the Okhotnik-B has a wingspan of more than 50 feet and a length of around between 34 and 36 feet. This certainly would put it in the same general size class as the X-47B.

The imagery also gives the first real top-down perspective on the Okhotnik-B, showing that its planform has a more pronounced wing sweep than X-47B. This could give the Russian drone a higher top speed and better efficiency and maneuverability at sustained high speeds.

It is also of note that the Okhotnik-B is the only aircraft visible on the flight line with an array of stores next to it. It is unclear whether these stores were actually meant to be associated with the drone or not. While the pictures of the unmanned aircraft that are available at present do not offer a clear view of its underside to determine whether or not it has any sort of internal payload bay or bays, it seems hard to see how it wouldn't, especially given its overall size.

If Russia does intend for the final design to have any stealthy characteristics, it will need to carry any weapons internally. However, as The War Zone has noted in its previous analysis of the available imagery of the Okhotnik-B, which you can find here and here, there are serious questions about the UCAV's stealth features, at least in its initial configuration.

The most glaring issue is the crude engine installation, which also does not seem to include any provisions for a stealthier arrangement in the future. The exhausts are a notoriously complex component of any stealth flying wing aircraft. The entire engine arrangement, including both the inlet and exhaust, also appears to be relatively in-line, another feature that would hurt the aircraft's low observable characteristics.

Combined with the high sweep, this engine configuration could add to the Okhotnik-B high-performance characteristics, though. An afterburning engine would similarly give the drone an added boost, potentially pushing it to transonic speeds, or possibly beyond, even if only in a short-duration sprint.

With a less stealthy, but higher performance configuration, the Okhotnik-B could offer benefits to the Russian Air Force, including as a "loyal wingman" for its Su-57s. There is already evidence that Russia may be exploring manned-unmanned teaming concepts using these two platforms.

The potentially high-performance design could make the Okhotnik-B particularly be well suited to the loyal wingman role, since it would help the drone better keep up with manned high-performance fighter jets such as the Su-57.

In addition, the Kremlin often has to defer or cancel the development or production of advanced systems in order to free up resources to support other programs. A UCAV, such as Okhotnik-B, might offer an alternate route to expanding its advanced air combat capabilities without needing to buy high-priced manned aircraft. It would also limit the need to recruit and train new aviators.

Russia itself is still likely to be in the process of exploring potential concepts of operation for the Okhotnik-B depending on how the drone is or isn't supposed to evolve throughout its still-ongoing development cycle. Russian officials have said in the past that Okhotnik-B was supposed to fly for the first time this Spring, but there has been no subsequent information about whether this has occurred or if that schedule has gotten pushed back for any reason.

The War Zone will certainly keep a close eye out for any new information about the Okhotnik-B. But, if nothing else, we do know that the prototype drone is definitely quite large.