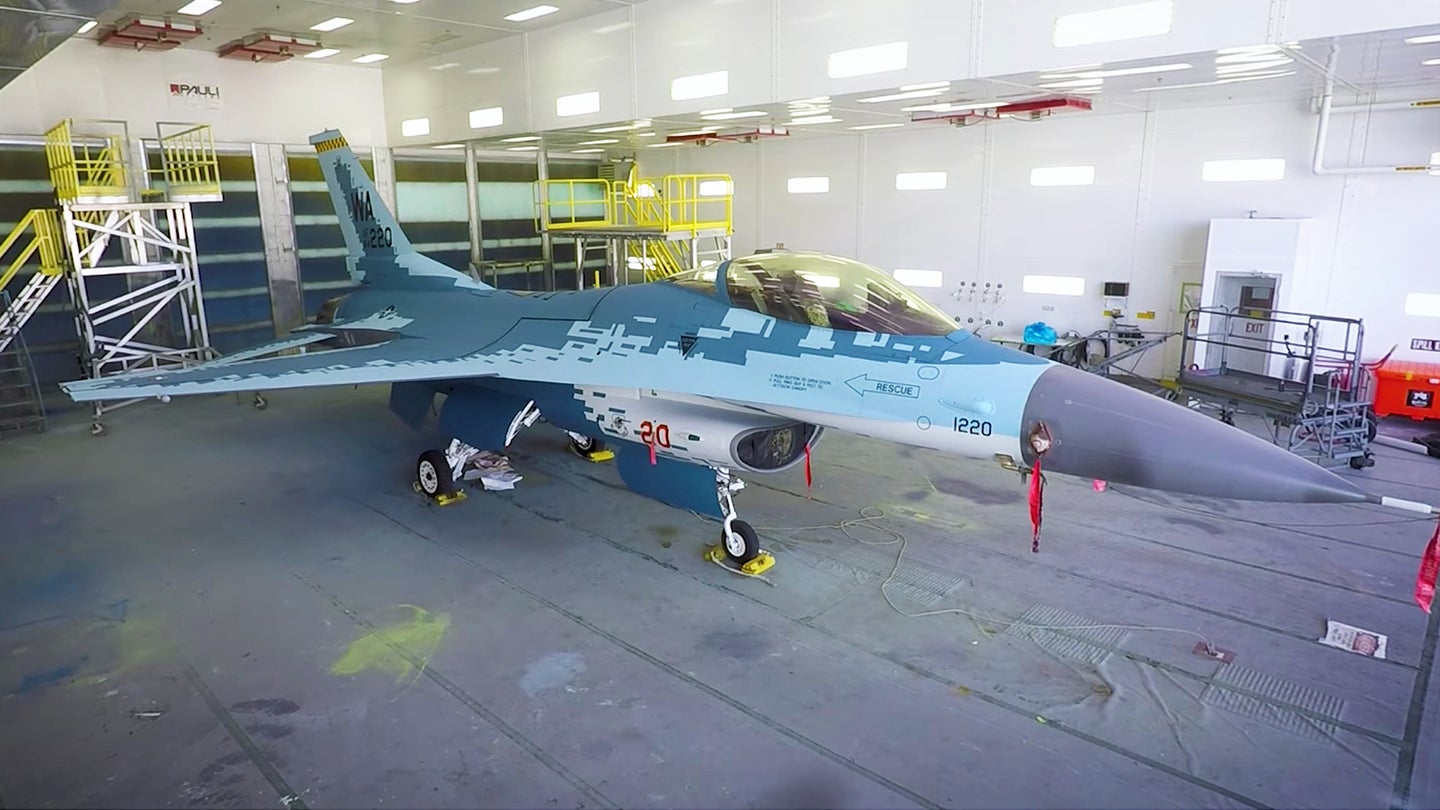 The much anticipated "ghost" scheme F-16C belonging to the 64th Aggressor Squadron based at Nellis AFB in Las Vegas has emerged from the paint barn. The paint job came to be via a crowdsourced competition on 57th Wing Commander Brigadier General Robert Novotny's Facebook page, with followers submitting different design ideas and voting on each one in a number of rounds, ending with this scheme being chosen. You can read all about how this competition came to be, the value of ornate aggressor paint jobs, and so much more in our interview with General Novotny.

Novotny posted a video on Facebook of the jet being painted and the final result of everyone's engagement. If it doesn't pop up below automatically, you can find it here.

The striking motif is similar to ones worn by some of Russia's small, but supposedly set to grow fleet of Su-57 next-generation fighters.

The new paint job appears to have four separate contrasting tones. The top features a digitized aqua colored pattern with a baby blue base, while the bottom is off-white with what appears to be a darker blue pattern overlaid. Of all the creative USAF aggressor paint jobs flying, it certainly seems to be one of the showiest.

As a side note, it appears that the Navy actually beat the USAF to the punch when it comes to fielding the first ghost-like scheme on a U.S. aggressor jet. Photos popped up earlier in the week showing a legacy F/A-18 Hornet belonging to VFC-12 sporting a very similar motif. Did the Navy actively attempt preempt the USAF's high-profile reveal? That isn't clear at this time, but other schemes have first appeared on VFC-12 jets just to show up on 64th AGRS jets not long after. Then again, these schemes are largely driven by enemy threats that exist in the real world, so coincidences are bound to happen.

Regardless of the possibility of a little good-natured competition between the services when it comes adversary paint jobs, it will be interesting to see the 'ghost' F-16 in the air with its new bad guy duds. If the scheme is well received, we will probably see it on other 64th AGRS jets, and who knows, maybe even aggressor F-35s, in the not too distant future.

Above all else, the new aggressor paint design stands a testament to how military commanders can have a meaningful, creative, and fun interaction with civilians on social media that actually results in something tangible that people can appreciate being part of.