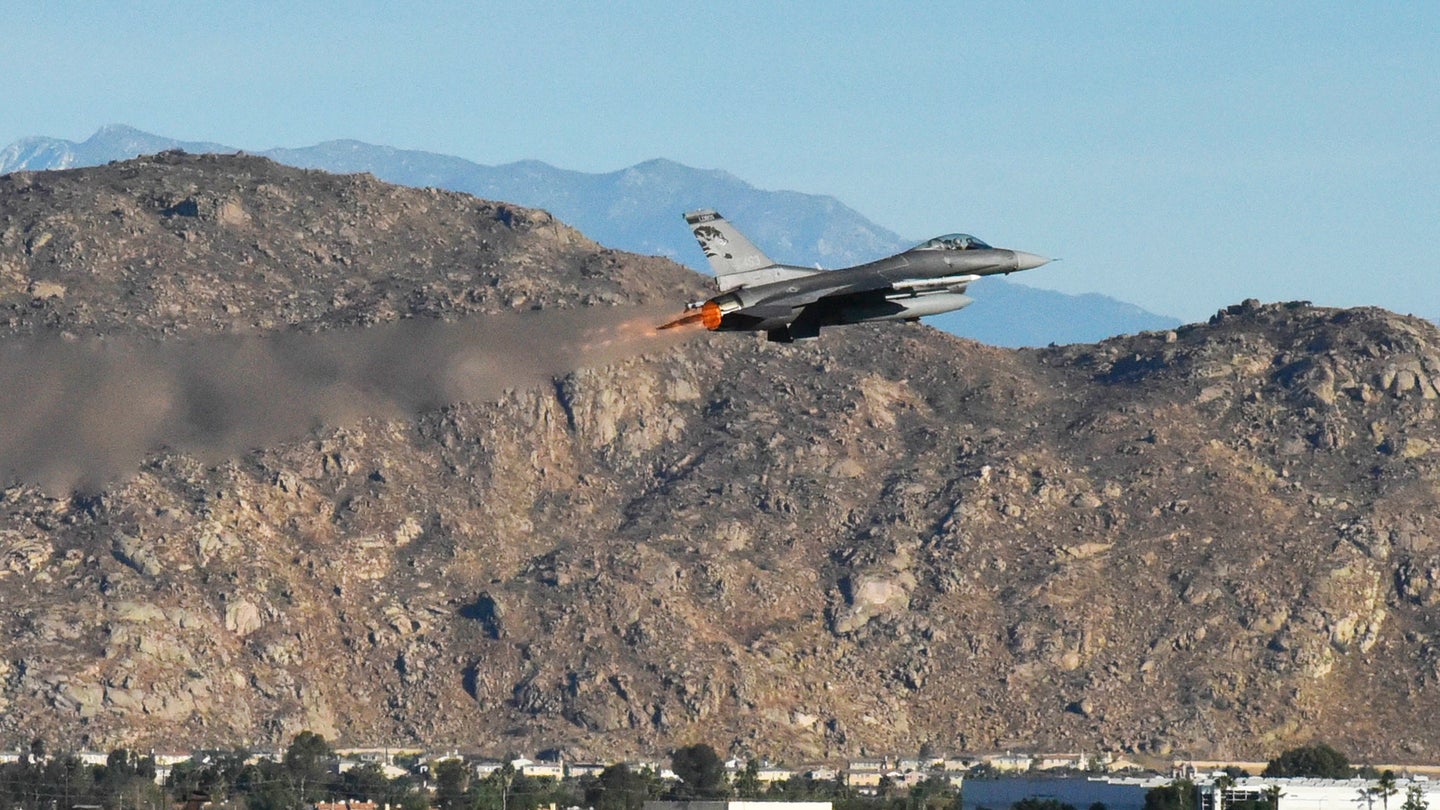 The situation is very fluid and details remain scarce at best, but multiple reports state that an F-16 has crashed near March Air Reserve Base located just outside of Riverside, California. The aircraft supposedly careened into a warehouse resulting in a substantial fire. Firefighters have requested a full hazmat response. Some are saying this indicates the aircraft was carrying live munitions, which could very well be true, but F-16s also use the volatile fuel hydrazine for power generation and the planes themselves contain materials that could be harmful to personnel when set alight. Some reports have also stated that the pilot ejected and landed safely, although they are yet to be officially confirmed.

March ARB is home to a remote alert site for fighters tasked with the air defense of the United States, and more specifically, the airspace over and around Southern California. Although the California Air National Guard 144th Fighter Wing, which is based in Fresno, has supported the mission there in the past, the in recent years, F-16s from out of state Air Guard units have provided aircraft and crews for the mission. Most notably, F-16s from the 114th Fighter Wing of the South Dakota Air National Guard have often satisfied this tasking.

The base also supports transient military aircraft and those in the region for exercises and training and houses an Air Mobility Command wing of C-17s and KC-135s, and an Air National Guard MQ-9 Reaper drone squadron, among other smaller residents.

Live video from a news helicopter shows the jet's canopy laying on the overrun of the runway and a parachute and harness nearby. The crash appears to have occurred on landing.

A hole has been punched in a warehouse nearby, with no recognizable parts of the F-16 at all inside the facility.

Here is where the jet went in:

According to the pilot of the news chopper, the building is used by Sea Water Inc. No word yet on any injuries on the ground, but that is probably a good sign at this point.

Also of note, the helicopter showed that the north end of the runway (shown above) is undergoing major rehabilitation and the threshold was moved south thousands of feet.

A shot from inside the building:

Here is the canopy laying on the runway overrun:

Confirmed that the South Dakota ANG was sitting alert at the time of the crash:

The NOTAM shows the first 3,300 feet of the runway was unusable.

Video from inside the warehouse shortly after the crash:

Dramatic dashcam video appears to show the F-16 crashing into the building at very low speed:

Here is the official release from the March ARB:

Five injuries on the ground, but no reported deaths as of this time, thankfully.