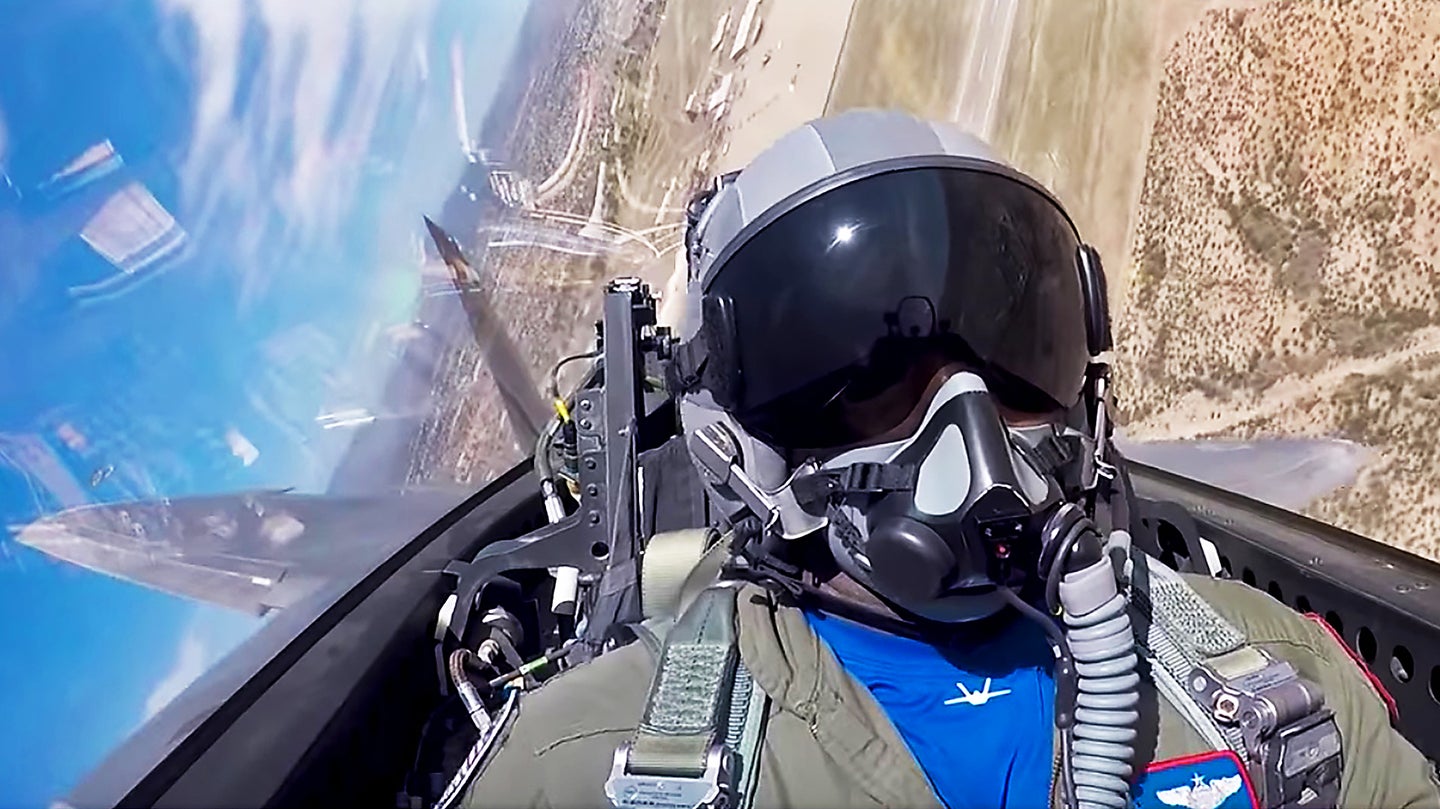 The Air Force F-22 Raptor Demonstration Team has released a video showing rare in-cockpit video of the stealth jet tearing through the skies. Images, let alone video, taken of or inside the F-22's cockpit have been highly restricted since the F-22A took its first flight over 20 years ago. This is especially true when it comes to its control panel, although a couple of photos do exist. While you can find piles of exciting GoPro-like clips taken inside the cockpits of nearly all tactical jets, similar clips featuring F-22s are far less common. Even Hollywood productions featuring A-list casts haven't gotten the green light to feature any internal angles of the F-22's cockpit. Now that is clearly changing and soon the Air Force's other stealth fighter demonstration team will also be joining the Raptor team when it comes to in-cockpit movie making magic.

The video was published on May 16th, 2019, by the team. It shows F-22 demo pilot Major Paul "Loco" Lopez putting the Raptor through a handful of air show maneuvers, most of which are the more traditional sequences in the routine. Still, the view is largely alien to those of us who have watched many cockpit video clips. The F-22's massive control surfaces are clearly visible fluttering away in the incredible view backward out of the jet's frameless bubble canopy. The video below the team's latest release shows a similar view taken in 2011. It features more the F-22's routine, but is of less quality.

The F-35 Demo Team, which features a new, highly-energized routine for this air show season, has teased its own cockpit video with a few short clips. It has a wider view than the Raptor video and uses 360' video capture technology for some awesome shifting perspectives. Most interestingly, you can see the F-35's stick and throttle 'inceptors' in the video and the pilot manipulating them through a few maneuvers. That video has yet to be released in full, but we will be sure to post it when it is.

The Air Force seems to be loosening up a bit overall when it comes to showing the cockpits of its most sensitive combat aircraft. Just recently, a video of the B-2 Spirit's cockpit, also taken in flight, was released for the first time. A very limited number of pictures of the stealth bomber's cockpit do exist showing its modern configuration, but none that offer such detail and show everything powered up and functioning during flight.

Our friend David Cenciotti did a nice breakdown of what he saw in that video. The only thing we can add at first glance is the windscreen frame can be seen where a special glass panel can be installed for nuclear missions. Once activated, this glass pane can go opaque in an instant when a flash from the detonation of a nuclear device is detected, thus saving the crew's eyesight without the need for having them wear cumbersome goggles that provide a similar function. You can read more about this technology in this past piece of ours.

It's somewhat puzzling that in a time marked by the Pentagon giving out less information to the public on its most potent capabilities and technologies, the approval for in-cockpit videos of aircraft that were previously off limits is a becoming a real trend. And it's one we are very thankful for.