An Oral Account Of The Birth Of A Sky Penis

A word-by-word aircrew account of how the sky dong sensation came to be high over Washington State is now available and it is an absolute must-read. 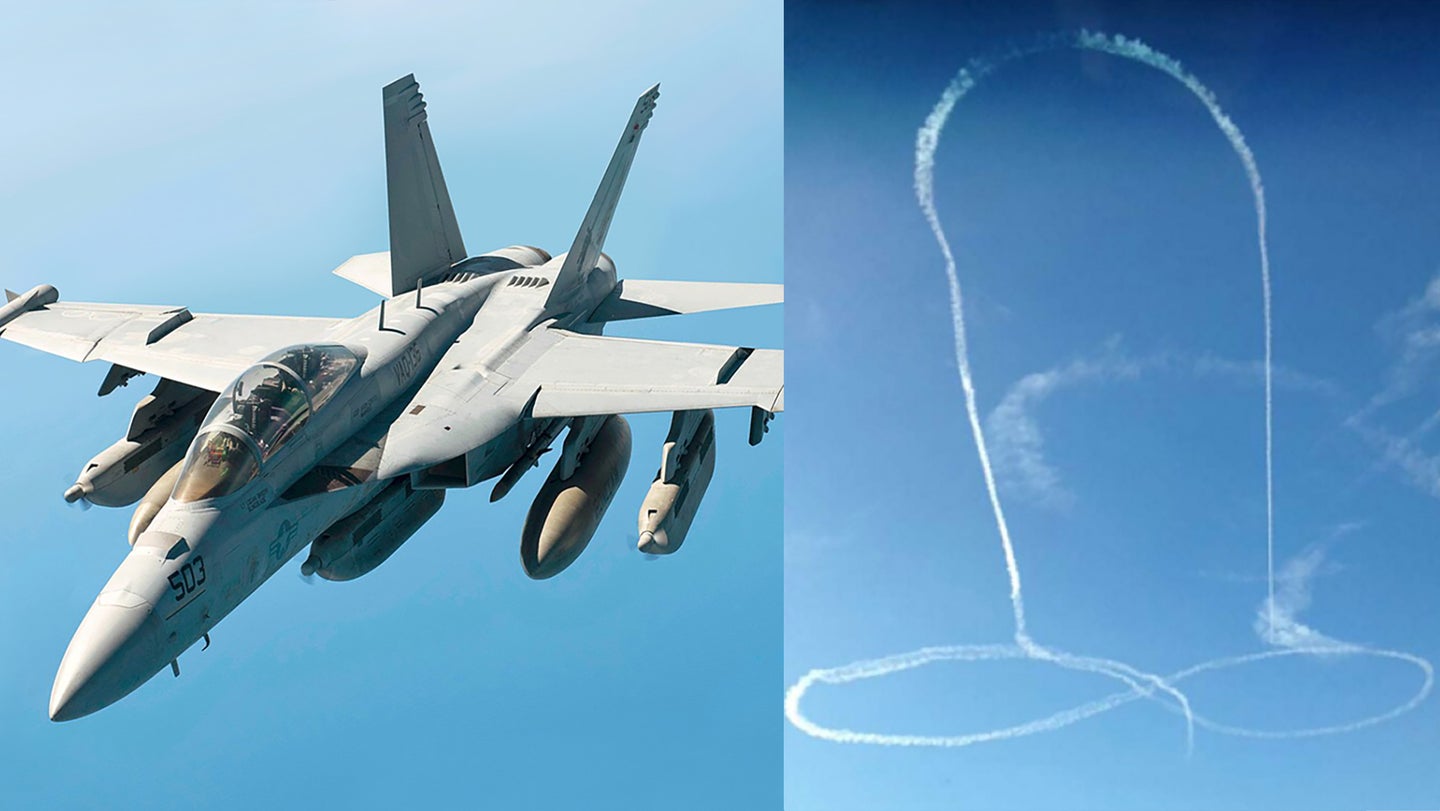 Although others have come before them, and certainly more have come after, in November of 2017, a pair of young aviators flying an EA-18G Growler out of Naval Air Station Whidbey Islandmade the art of aerial phallic expression a worldwide sensation. After many months of wondering the backstory behind the wind-borne wiener, we finally know the truth. In what has to be one of the most entertaining results from a Freedom Of Information Act request, Geoff Ziezulewicz, writing for Navy Times, not only gives us the full background on what came after the nutty incident, but he also provides the dialogue between the pilot and the electronic warfare officer (EWO) that preceded it.

The following is Ziezulewicz's eloquent presentation of that historic repartee:

The day’s flight was to be a standard 90 minutes of training over the skies of north-central Washington.

Their partner jet soon flew to another section of their training area, and the lieutenants got an idea.

The EWO broached it first, according to the investigation.

“My initial reaction was no, bad,” the pilot wrote in a statement after the incident. “But for some reason still unknown to me, I eventually decided to do it.”

Their sky penis plan of attack was captured on their cockpit video recording system, a transcript of which is included in the investigation.

“Draw a giant penis,” the EWO said. “That would be awesome.”

“What did you do on your flight?” the pilot joked. “Oh, we turned dinosaurs into sky penises.

“You should totally try to draw a penis,” the EWO advised.

“I could definitely draw one, that would be easy,” the pilot boasted. “I could basically draw a figure eight and turn around and come back. I’m gonna go down, grab some speed and hopefully get out of the contrail layer so they’re not connected to each other.”

They theorized on the second-order effects of their nascent sky drawing.

“Dude, that would be so funny,” the pilot said. “Airliner’s coming back on their way into Seattle, just this big (expletive)ing, giant penis. We could almost draw a vein in the middle of it too.”

Soon, the EWO reported they were definitely “marking.”

They had found the sweet altitude, and the contrail sky penis was being born in their wake.

“Balls are going to be a little lopsided,” the pilot advised.

“Balls are complete,” he reported moments later. “I just gotta navigate a little bit over here for the shaft.”

“Which way is the shaft going?” the EWO asked.

“The shaft will go to the left,” the pilot answered.

“It’s gonna be a wide shaft,” the EWO noted.

“I don’t wanna make it just like 3 balls,” the pilot said.

The jet streaked across the sky, and the duo’s magnum opus continued to take shape, showcasing the pilot’s prowess in the process.

“To get out of this, I’m gonna go like down and to the right,” the pilot said. “And we’ll come back up over the top and try to take a look at it.”

“I have a feeling the balls will have dissipated by then,” his partner answered.

They flew away to a distance where they could take in their work.

They cracked up in the cockpit as their sky penis came into full view, snapping pics they would later delete once they realized their command would likely go apoplectic.

“Oh yes, that was (expletive)ing amazing,” the pilot said. “This is so obvious.”

They waited to see if their partner jet would notice their work.

“Your artwork is amazing,” the lieutenant commander EWO in the other jet radioed to them.

“Soon after, I realized the extent of our actions,” the pilot wrote. “That the contrails were remaining longer than predicted.”

“I remarked that we needed to take steps to try to obfuscate it,” he wrote. “I flew one pass over it essentially trying to scribble it out with my contrails. That pass was ineffective.”

And so, the legend was born. What came next for the artistic aviators wasn't pretty. Make sure to read the entire account of the investigation by clicking here.