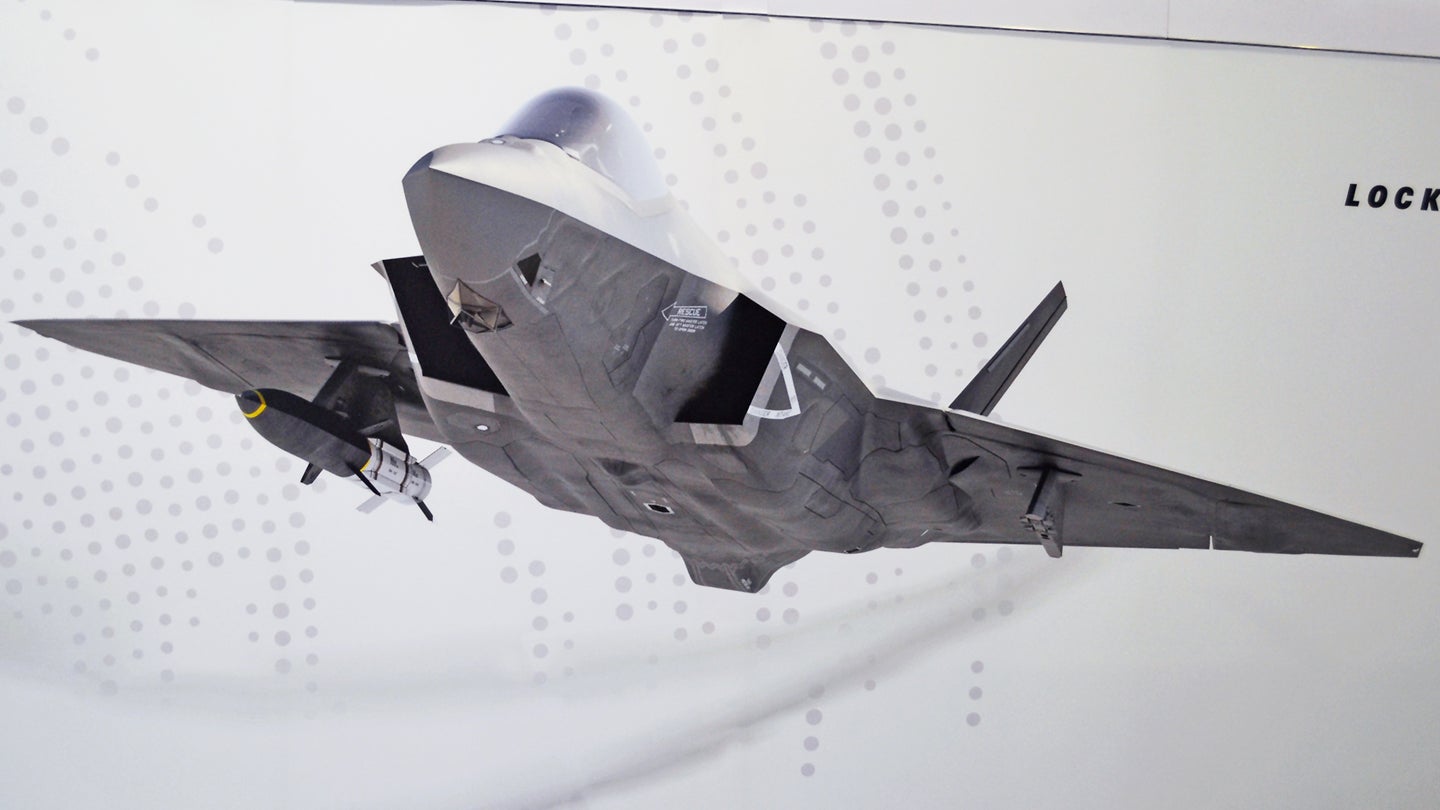 Lockheed Martin has revealed a concept for a variant of its air-launched Hypersonic Air-breathing Weapon Concept hypersonic missile, or HAWC, as an armament option for U.S. Navy's F-35C Joint Strike Fighter, and potentially other aircraft, possibly in a maritime strike role. HAWC, which has so far been under development as a land attack weapon, is set to fly for the first time before the end of the year.

The artist's conception of an F-35C firing a HAWC derivative first appeared at the Navy League's annual Sea, Air, Space convention just outside of Washington, D.C., on May 6, 2019. The rendering shows the stealth aircraft configured to carry two of these weapons externally, one under each wing. In April 2018, the U.S. Air Force, working together with the Defense Advanced Research Projects Agency (DARPA), awarded Lockheed Martin a contract worth approximately $928 million for the development of HAWC.

As its name suggests, HAWC is an air-breathing weapon that flies at hypersonic speed, which is typically defined as anything above Mach 5. The Air Force and DARPA have said that missile will use a rocket booster to accelerate to at least that speed, after which a high-speed scramjet engine will kick in and ensure it maintains a speed between Mach 5 and 10.

HAWC, as well as other hypersonic weapons, open up the ability to conduct game-changing short- or no-notice strikes against time-sensitive and other critical targets, and do so at long ranges, something The War Zone has examined in depth in the past. Hypersonics can also maneuver within the atmosphere, following a more unpredictable flight path compared to other traditional long-range weapons, such as ballistic missiles, making it harder for an opponent to defend against them. These same benefits apply regardless of whether the target is on land or at sea.

DARPA and the Air Force have already billed HAWC as something of a stepping stone to more refined air-launched, air-breathing hypersonic weapon developments in the future. The program "will develop and demonstrate technologies for an effective and affordable air-launched hypersonic cruise missile," according to the description in DARPA's most recent budget request for the 2020 Fiscal Year. "These technologies include advanced air vehicle configurations capable of efficient hypersonic flight, hydrocarbon scramjet-powered propulsion to enable sustained hypersonic cruise, thermal management approaches designed for high-temperature cruise, and affordable system designs and manufacturing approaches."

So, with all this in mind, it's not surprising that the U.S. Navy would be interested in HAWC and in the potential for an anti-ship version in the future. The weapon's speed and inherent maneuverability would certainly help in the development of a variant for rapidly prosecuting strikes against moving maritime targets.

Lockheed Martin's artwork depicts an F-35C carrying the weapon externally, which would effectively eliminate its stealth qualities. However, the speed and range of hypersonic weapons give them an intrinsic stand-off capability, making this a less pressing issue.

At the same time, those same characteristics make hypersonic weapons ideally suited to non-stealthy launch platforms, as well. HAWC, or a maritime strike variant thereof, could just as easily be an option for other Navy fighter jets, such as the F/A-18E/F Super Hornet, underscoring the reality that fighters will increasingly be carrying outsized stand-off weapons as time goes on.

Larger platforms, such as the Navy's P-8A Poseidon maritime patrol aircraft, might find themselves carrying HAWC follow-on variants, too. An anti-ship variant could also find a home in the Air Force on that service's B-1 or B-52 bombers, the former of which are already able to carry Lockheed Martin's AGM-158C Long Range Anti-Ship Missile (LRASM), giving them a significant new maritime strike role. It might be an option for smaller Air Force

But, at the moment, any actual follow-on variants of HAWC still seem to be a ways off. At present, HAWC is in a "race" with another U.S. military hypersonic weapon program, Tactical Boost Glide (TBG), to see which will fly first. DARPA is developing TBG, which is an unpowered boost-glide vehicle, together with the Air Force and the U.S. Navy for air- and ship-launched applications, respectively.

"We're on track for both to have flights … before the calendar year ends," Dr. Steven Walker, head of DARPA, told reporters on May 1, 2019. Even so, when "you actually get into the building of these things and qualifying the hardware, … things tend to slip," he cautioned.

DARPA's latest budget request says the current plan is for the first flight of HAWC to occur sometime in Fiscal Year 2020, which begins on Oct. 1, 2019. There are multiple flight tests scheduled for that fiscal cycle, which runs through Sept. 30, 2020.

If Lockheed Martin's art is anything to go by, interest is already growing outside of the Air Force in both HAWC and whatever variants or follow-on hypersonic missiles might come next.