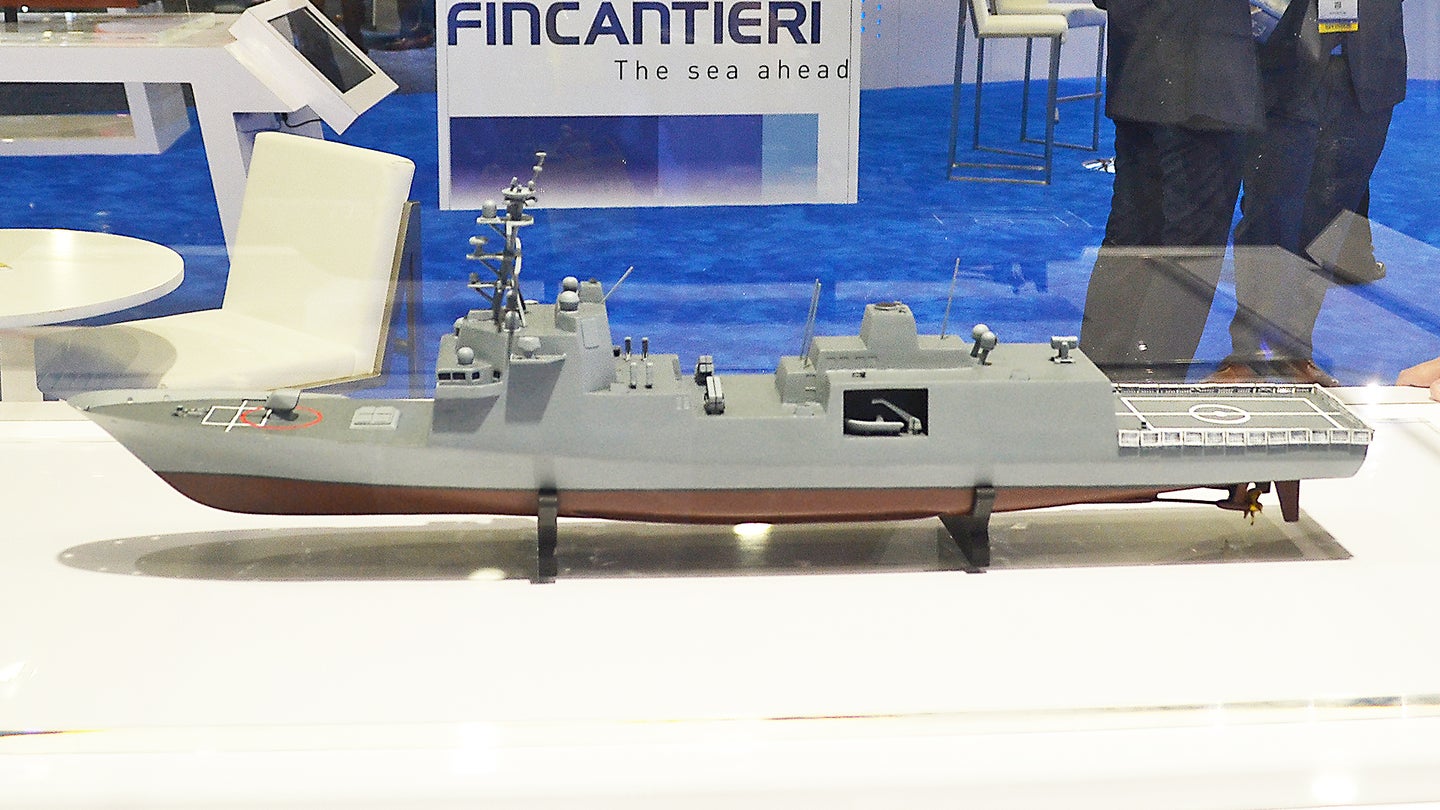 Italy's Fincantieri Marine Group's entrant into the FFG(X) is one of the most promising in the field of five contenders as it is based on the successful and modern Fregata Europea Multi-Missione (FREMM)—or European Multi-Mission Frigate in English—that will serve a number of multi-national users, already including NATO allies France and Italy. While we know what the existing ships look like in their various configurations, which includes anti-submarine, general purpose, and air defense variants with various other customizations based on the user's demands, we haven't really seen what a U.S. version would look like in tangible form, that is until now.

Fincantieri is the largest shipbuilder in Europe and brings a strong pedigree to the table and a design that is known to be flexible and effective. If they were to win the FFG(X) tender, the ships would be built by Marinette Marine in Wisconsin—a wholly owned subsidiary of Fincantieri and the same shipbuilder that currently produces Freedom-class Littoral Combat Ships. While the FREMM design is considered off the shelf, it will need to be equipped with loads of U.S.-specific hardware. These demands, which you can read all about here and here, will drastically change the look of the ship, and especially its superstructure as it will have to house three Enterprise Air Surveillance Radar (EASR) arrays, each containing nine AESA modules.

A model of the FREMM FFG(X) variant was displayed at this year's Air-Sea-Space symposium right outside of Washington, D.C. As you can see, beyond sporting the EASR arrays, the ship has a similar raked mast as what's found on the Arleigh Burke class destroyer. Also visible is a 32 cell vertical launch system (VLS) magazine ahead of the superstructure, a 57mm deck gun, eight canister-launched Naval Strike Missiles, and a RIM-116 Rolling Airframe Missile launcher above the hangar deck.

All said, it looks like a no-nonsense, low-risk package that appears to meet all the basic FFG(X) requirements. The FREMM's Combined diesel-electric and gas (CODLAG) propulsion concept would also bring a new level of efficiency to the Navy's surface combatant fleet.

The F100 has always been a leading contender for FFG(X), but some have noted that the loss of the Norwegian guided missile frigate Helge Ingstad, which is based on the F100 design, last November, may have adversely impacted its chances. This comes from a preliminary Norwegian investigation into that accident that suggested design flaws may have exacerbated the damage, a claim that Spain's Navantia—the shipbuilder—disputes.

Austal USA's model of their supersized Independence class Littoral Combat Ship-turned FFG(X) was also on display. It is pretty interesting as it shows the VLS mounted behind the flight deck along with a large open space that one could imagine would be used for future expansion, such as the addition of laser systems—the FFG(X) will have power on hand for at least a 150-kilowatt laser system—or modular weapons and sensor weapons payloads:

Lockheed didn't have a model displayed of their Freedom class LCS derivative being proposed for FFG(X), but it should look similar to when we saw it last year, although they may have lengthened it to add space for more VLS cells and a tweaked propulsion system.

As for Huntington Ingalls FFG(X) design, we still have yet to see a mature configuration in model or rendering form. When asked about their FFG(X) entrant at this year's Sea-Air-Space symposium by our own Joseph Trevithick, "we are participating" is all a representative from Huntington Ingalls Industries would say. "No comment," they added when asked to confirm that the proposed design would still be derived from the Legend class National Security Cutter.

As it sits now, the Navy has gone from targeting a unit price of nearly $1B per FFG(X) hull to $800M, so cost should be a major factor in who wins the contract for 20 ships. Finalized proposals from all five competitors will be submitted by late summer/early fall and a winner will be announced in 2020. The first ships will be bought in 2020 and 2021—one each year—with the first coming online around 2025. The remaining 18 ships would be bought at a rate of two per year through 2030, but it is very possible that construction could be extended and even ramped-up if the Navy likes what it receives and money is available to do so.

FFG(X) is truly the most exciting program the Navy has running right now because it stands to realign what missions are assigned to what ships in a very positive way. In addition, FFG(X) will be able to leverage many technologies that have been proven on larger U.S. surface combatants and miniaturized over time or directly migrated to the smaller and more efficient hullforms. In other words, the age of the frigate has arrived as these ships will be able to do many missions that the Navy's destroyers, and cruisers to a lesser degree, are currently tasked with, freeing up those multi-billion dollar ships for higher-end missions that are in extreme demand.

Growth in capability is also part of the FFG(X) initiative. These ships will likely end up hosting more advanced capabilities than they have initially, giving them even more high-end combat punch. But above all else, FFG(X) will help mitigate the ramifications of the dismal Littoral Combat Ship debacle that has plagued the Navy for over a decade and a half and will put the seagoing force back on course when it comes to fielding a reliable and affordable, yet still potent surface combat capability for decades to come.

Which design do you like? Let us know in the always lively comments section below!