The F-35As flew in a less than stealthy configuration as the aircraft's low observable capabilities weren't needed—at least not yet. 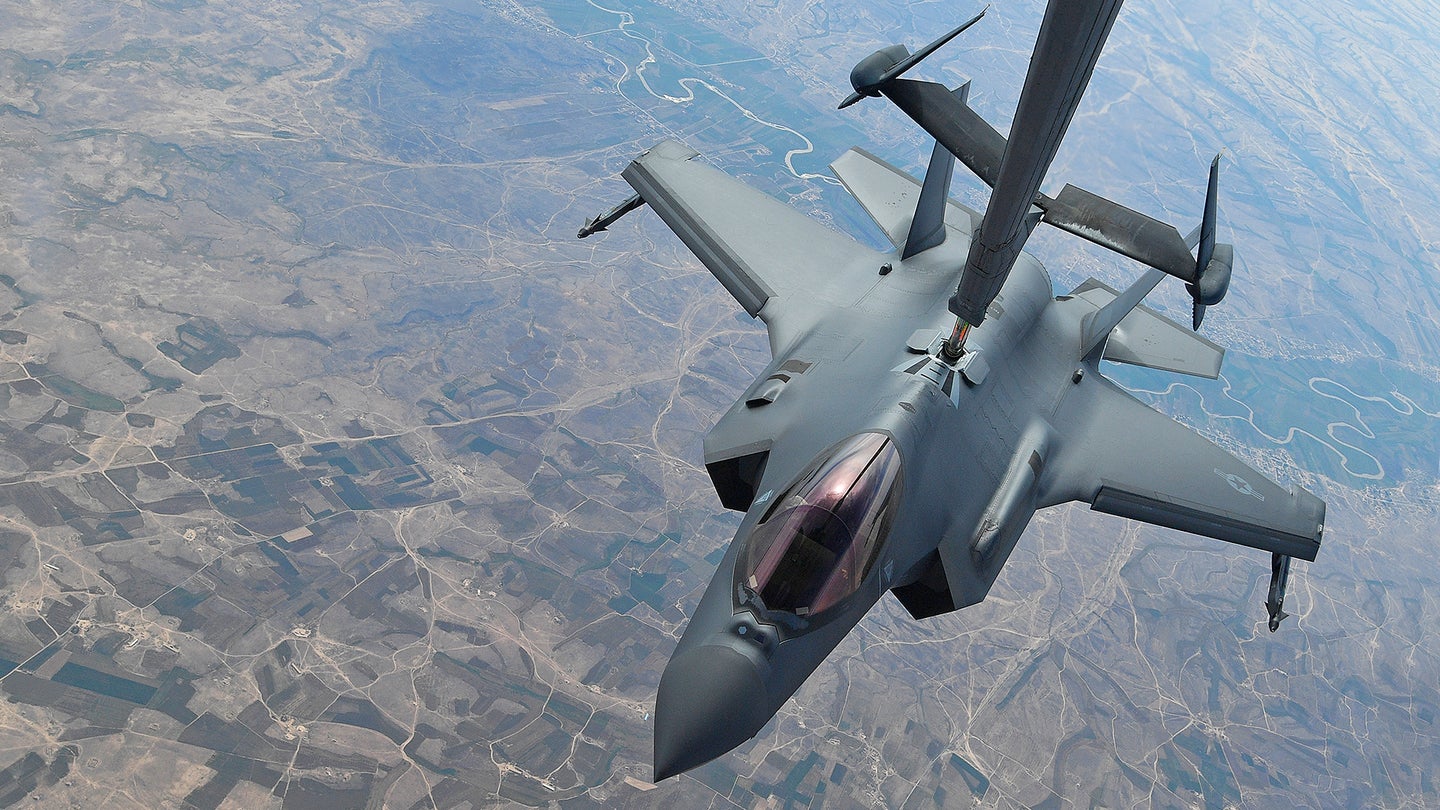 The United States Air Force's F-35A has finally executed its first kinetic combat action. Two F-35As flew from Al Dhafra Air Base in the UAE on a combat mission over Iraq on April 30th, 2019. They released GPS-guided Joint Direct Attack Munitions to strike an ISIS tunnel network and weapons cache located deep in the Hamrin Mountains near Wadi Ashai, Iraq. The facility was supposedly a danger to coalition forces and could have been a key component in the revitalization of the extremist group's fighting power.

The F-35As used in the mission are part of a larger USAF contingent of the 5th generation fighters from the 388th Fighter Wing and the 419th Fighter Wing that deployed from Hill AFB in Utah to the Middle East on April 15, 2019. The deployment is the first to the Middle East for the USAF's F-35As. It's also important to note that Israel has already flown combat missions with their F-35Is and the USMC has also flown a number of combat missions over the Middle East with their F-35Bs, with the first combat use of the aircraft taking place last September.

“We have the ability to gather, fuse and pass so much information, that we make every friendly aircraft more survivable and lethal... The F-35A has sensors everywhere, it has advanced radar, and it is gathering and fusing all this information from the battlespace in real time... Now it has the ability to take that information and share it with other F-35s or even other fourth generation aircraft in the same package that can also see the integrated picture... That, combined with low-observable technology, allows us to really complement any combined force package and be ready to support AOR contingencies."

This all may be true, but in the case of this mission, and likely most those supporting Operation Inherent Resolve, the F-35s are not leveraging their low-observable (stealth) capability. The aircraft are clearly seen fitted with AIM-9X air-to-air missiles on their wingtip pylons and radar reflectors bolted on atop and below their fuselages. This gives them a large radar signature, which makes sense as they are operating over areas like Iraq where low-observability isn't an advantage as air superiority is largely assured.

Since the F-35As are already flying in an unstealthy configuration, the inclusion of AIM-9Xs makes sense as why not include them? All America tactical jets usually fly with Sidewinders for self-defense even in relatively benign air combat environments like Afghanistan. The F-35 can carry a pair of AIM-120 AMRAAMs in its weapons bays along with a full internal bomb load, but those missiles don't have the same capabilities in the within-visual-range air combat environment as the super-nimble and high-off boresight targetable AIM-9X.

The practice of flying the F-35 in non-stealthy configurations could change if the F-35As venture into Syria and take on the roving 'quarterback' role that the F-22 Raptor provided for years over the troubled country. There is a tradeoff to doing so, though. Flying in full-on low-observable configuration could allow a peer state like Russia, which has its most advanced air defense and electronic surveillance systems deployed to the country, to collect intelligence on the aircraft's low observable capabilities. Albeit this is less of an issue if the F-35As stay well into the eastern part of the country.

In fact, the F-35A is less capable in certain respects than an F-16 for strike missions against insurgents. It's targeting capabilities via its Electro-Optical Targeting System mounted under its nose inside a sapphire-glass encrusted framework is based on 15-year-old technology and pales in comparison to the image fidelity and certain key modes offered by latest Sniper and Litening targeting pods carried by 4th generation fighters. The F-35's EOTS is supposed to upgraded under the still as yet to be fully approved Block IV upgrade program that will enhance the F-35's software and some of its key components in the coming decade.

As I have posited before, giving the F-35 the ability to carry a bolt-on Advanced Sniper pod would make sense in the interim for close air support and counter-insurgency duties. In the case of their first combat action, the F-35As hit pre-planned targets with JDAMs that don't need the aircraft's EOTS at all. We'll have to see how the jet does in more dynamic air support missions as its deployment continues, but since it flies these missions in unstealthy form, giving it the same ability to use advanced targeting pods that 4th generation fighters use seems incredibly logical.

The fact of the matter is that most of the missions the F-35 will fly will not require its low observable capabilities at all. So these types of configurations, where external stores are carried, will be more common than not as the Joint Strike Fighter fleet expands its operations abroad.

Regardless, today is a big deal for the USAF and the F-35 program, one that has been in the making for decades. With any luck, we will get more details about the F-35A's feats over the Middle East in the coming days as the force gets better situated and the mission tempo heats up.