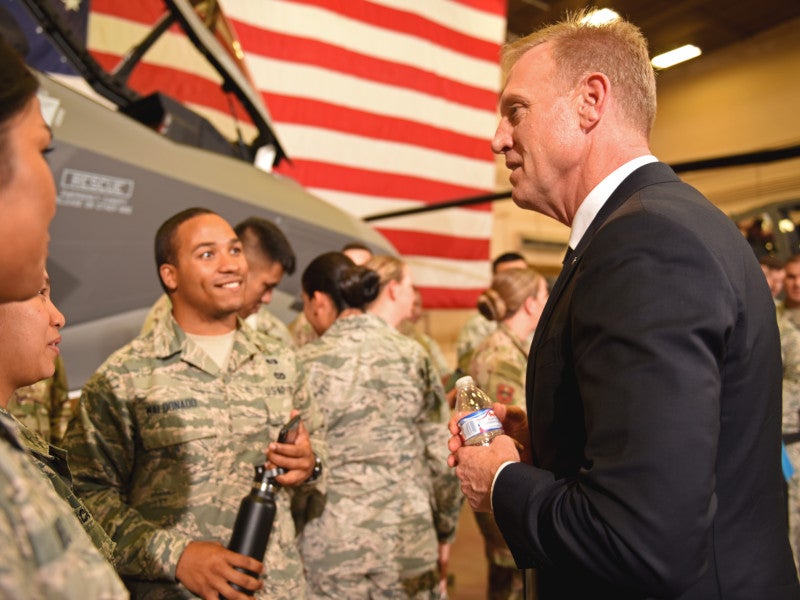 The Pentagon's top watchdog has concluded that Acting Secretary of Defense Patrick Shanahan, a former Boeing executive, has not acted in a prejudicial way against Lockheed Martin or the F-35 Joint Strike Fighter or otherwise unfairly favored products from his former employer. When it comes to the F-35, the investigation bases its conclusion in large part on one particularly important factor, that many senior U.S. military officials, as well as individuals from other arms of the U.S. government, have been critical of the program and its management in public, and for good reason, too.

The Department of Defense's Office of the Inspector General released its finding on Apr. 25, 2019, a little over a month after initiating its investigation. News of allegations that Shanahan had unfairly disparaged the F-35 and instead advocated for the purchase of F-15EX Advanced Eagle and F/A-18E/F Super Hornet fighter jets, both Boeing products, first began to publicly surface in December 2018, after Secretary of Defense James Mattis resigned over President Donald Trump's order to withdraw U.S. forces from Syria. However, some of these allegations dated all the way back to Shanahan's appointment as Deputy Secretary of Defense in 2017. The Inspector General also looked into whether Shanahan had an unethical impact on the KC-46 Pegasus tanker program, another Boeing product, and had tried to steer other work toward his former employer.

Investigators interviewed more than 30 people and reviewed thousands of pages of documentation in the course of their review. Those documents included a detailed "screening arrangement," by which Pentagon officials ensure that Shanahan remains recused from decision making that might involve a conflict of interest with Boeing. By all accounts, this process has worked as intended.

The Inspector General's Office is keen to stress in its report that Shanahan certainly has complained about the F-35, but about the program and how all parties involved have executed it, rather than the plane itself. The investigators, however, found that his complaints were not only not out of the ordinary in the halls of the Pentagon, but were "substantive" in nature.

"We brought data to debunk that [the aircraft is] screwed up. We brought the warfighter in. They talked about flying the [F-35], and they talk about how good [the F-35] is," Winter told investigators. "So it started – that – when the warfighter talked [Mr. Shanahan] goes, 'Okay. [The F-35 aircraft] works. But it costs too much.' 'Yes, sir.' Okay. So now the [F-35] program is screwed up because it costs too much. It’s screwed up because you are accepting the poor performance of your industry partners to include Lockheed Martin."

Winter not only did not try to disabuse Shanahan of the belief that the F-35 program cost too much, he publicly voiced similar sentiments himself in February 2018. That month, the Vice Admiral said he felt Lockheed Martin was not negotiating in good faith and that it had not done enough to help bring down the unit price of all three variants of the Joint Strike Fighter.

This reality almost certainly contributed to the decision by then-Secretary of Defense Mattis to order Shanahan to take a hard look at the F-35 program, which occurred between April and May 2018 according to the Inspector General. Investigators talked to Mattis, who rebuffed the idea that this review had been biased against the F-35 or Lockheed Martin, telling them:

"He was trying to get the program to a point that we can have confidence in the numbers we said we were going to buy. If you say you’re going to buy them and the cost is supposed to go down and each block comes off, and the plant gets more efficient, the supply chain is more efficient is not happening that we say that the cost per flight hour is going to be lower and the cost per flight hour is not going lower then you’ve got a problem. The program is unsustainable."

A number of other senior U.S. military officers and civilian officials further confirmed that Shanahan had been critical of the F-35 program and its price tag, but not without reason and not at a level inconsistent with statements from other individuals. "Many people criticized the F-35 program. I’ve criticized the F-35 program in public," U.S. Air Force General John Hyten, head of U.S. Strategic Command and nominee to become the next Vice Chairman of the Joint Chiefs of Staff, said in his interview with the Inspector General. The final report also includes the list of statements seen below.

The report also cites similar commentary from other U.S. government entities, especially the Government Accountability Office (GAO). Just between April 2016 and June 2018, GAO has issued three highly critical reports regarding the F-35 Program, adding to dozens of other public reviews over the years.

On Apr. 25, 2019, the same day the Pentagon's Inspector General released its review of the investigation into Shanahan, GAO dropped yet another report, highlighting severe supply chain challenges, and associated costs, that the F-35 program is facing. The Congressional watchdog found that between May and November 2018, F-35s across the U.S. Air Force, Marine Corps, Navy were not able to fly 30 percent of the time, on average, simply due to a lack of spare parts.

The difficulty in obtaining the correct spare parts, and getting spare parts in general, is an issue the GAO drew attention to in 2017. The JPO still says its goal is to be able to get parts removed from aircraft, repaired or replaced, and available for distribution to units in need within 60 to 90 days. As of November 2018, this process took an average of 188 days.

On top of that, significant stores of spare parts are no longer usable since the U.S. military purchased them years ago, before Lockheed Martin made a host of changes and upgrades to the Joint Strike Fighters as part of a process known as "concurrency," which you can read about more here. During one recent deployment, the Marines found that 44 percent of their allotted spare parts were incompatible with their F-35Bs in their present configuration.

All of this increases sustainment costs and contributes to the absymal full mission capable rates for all F-35 variants across the services, something The War Zone has previously analyzed in depth. GAO says that based on the current supply chain problems, at the very best under the most optimal conditions, the U.S. military's F-35 fleets will never be able to get to a full mission capable rate above approximately 70 percent, 10 percent less than then-Secretary of Defense Mattis had laid out in 2018 as a goal for the services to reach by the end of this year.

On top of all that, Shanahan's attitude, and his changed opinions on the performance of the F-35 as an aircraft, are also markedly similar in many respects to that of President Trump's, who openly disparaged the Joint Strike Fighter on the campaign trail. Using the Freedom of Information Act, The War Zone recently obtained briefings Trump received in 2016 as President-Elect, including on that covered the F-35, that acknowledge, without caveat, that the program was riddled by cost overruns and mismanagement for years that have left as a lasting impact despite "marked improvement."

Trump walked out of those meetings publicly declaring that there was a need to get the F-35 program's costs under control and later claimed to have been personally responsible for dropping unit costs, an assertion that remains dubious. The F-35 JPO and Lockheed Martin have worked to drive the unit price down, but serious concerns remain about how much money will be necessary to operate and sustain the aircraft over their expected service life.

Just days ago, it emerged that a revised Pentagon estimate of the F-35's final research and development costs had added more than $20 billion to account for the still-ongoing Block 4 upgrade effort, which had been missing previously from this tally. The total projected operating and support costs through 2070 also grew by more than $75 billion, raising that figure to $1.196 trillion.

All told, the Inspector General's investigation into Shanahan's behavior is not only a vindication of the "screening arrangement" and his personal efforts to avoid any appearance of bias, but also a stark reminder that reasoned criticism of the F-35 program is not, in of itself, unethical. The release of the report notably comes as opposition is building in Congress to a proposed U.S. Air Force purchase of Boeing F-15EX fighter jets and Lockheed Martin voicing frustration at that service's plans to purchase slightly fewer F-35s in the near term.

"I think the frustrating piece for us is the United States Air Force and we’ll continue working with our customer and with representatives in the government on what’s the right path forward there," Lockheed Martin's Chief Financial Officer Ken Possenriede said during a quarterly earnings call on Apr. 23, 2019. "How they manage what they buy year to year, that’s always been a challenge as they look at what their overall needs are relative to the budgets that they have to work with," Lockheed Martin's CEO Marillyn Hewson added during the conference call.

The Air Force's planned purchase of F-15EXs was based on the recommendation of the Pentagon's Cost Assessment and Program Evaluation (CAPE) office, which itself was informed, in part, by concerns about whether the F-35 program costs would become unsustainable. You can read more in detail about the evolution of F-15EX effort here and here. It has also since emerged that CAPE was also influenced by industrial base concerns and a desire to ensure that multiple companies would continue to compete in the "tactical aircraft portfolio."

If nothing else, the report could finally pave the way for Shanahan's possible nomination and confirmation as Secretary of Defense after months of him serving in this role only in an "acting" capacity. But the investigation's tangential findings regarding the F-35 program, its costs, and its overall sustainability, also seem to point to what's to come in the next few months as a larger budget battle over future fighter jet purchases seems increasingly inevitable.

When Shanahan goes to defend the Pentagon's proposed budget for the 2020 Fiscal Year, he will now not only have an independent review that shows his critical comments have been fact-based and unbiased, but one that says he's hardly alone in those views.