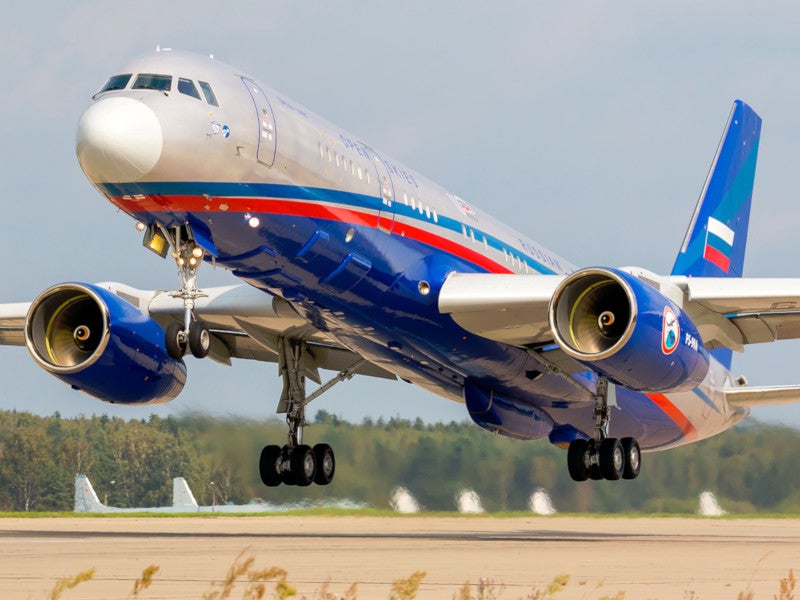 Russia is sending one of its two Tu-214ON observation aircraft the United States under the Open Skies Treaty, which gives signatories the opportunity to fly surveillance missions over each other’s territory, including the most sensitive of locales. Less than a month ago, an older Tu-154-ON aircraft flew a route that touched on, among other things, the secretive flight test facilities at Area 51 and the Nevada Test Site. The aircraft also made photo runs over many of America's most important military installations in the Southwestern United States. However, the Tu-214-based planes have been a particular point of contention between the two countries and the U.S. government briefly refused to certify them as being compliant with the treaty’s terms last year.

The Tu-214ON is set to arrive at Rosecrans Air National Guard Base, which is attached to Rosecrans Memorial Airport in Saint Joseph, Missouri, on Apr. 22, according to an official statement from the Russian Ministry of Defense. The aircraft will conduct flights from that base through Apr. 27, 2019. The Kremlin did not specify what locations the plane would fly over and the U.S. government has not issued any statement of its own.

“The Russian aircraft will carry out the flight according to the route agreed with the observed party,” the Russian statement read. “U.S. experts on board will monitor the procedure for using the observation equipment and compliance with the provisions stipulated by the agreement.”

Online flight tracking software showed one of the Tu-214ONs, with the registration number RF-64525, and using an Open Skies call sign, OSY332T, landing in Reykjavik, Iceland just after 9:00 AM Eastern Standard Time on Apr. 22, 2019. The aircraft took off again around 11:10 to continue its flight to Rosecrans.

Rosecrans is an ideal location to stage the Open Skies flights given its central location in the United States. The Kremlin says that the treaty mission will encompass a distance of no more than approximately 2,980 miles in total. From the base in Missouri, this would give the Tu-214ON the ability to fly routes that could touch on various significant U.S. military installations.

The plane wouldn't have to go very far to start surveilling very sensitive sites, though. Whiteman Air Force Base, home to the U.S. Air Force's B-2A Spirit stealth bombers, is also in Missouri, situated around 100 miles to the southeast of Rosecrans. There are other strategic bomber bases well within range, too.

Offutt Air Force Base in neighboring Nebraska could be another possibility. This base hosts U.S. Strategic Command’s headquarters, including a new command and control bunker, the U.S. Air Force’s 55th Wing, which controls the bulk of the service’s RC-135 spy planes, as well as other specialized aircraft, such the E-4B Nightwatch “doomsday” planes. Other locations of interest would be the intercontinental ballistic missile fields in Montana, North Dakota, and Wyoming.

But the Tu-214ON would also be within range of Texas’ Fort Hood, one of the largest U.S. Army bases in the country. The plane would even be able to fly over the greater Washington, D.C. area. These are just a small few of the many possibilities. Much of the contiguous United States would be within the Tu-214ON's range from Rosecrans. The central United States by itself is covered in numerous military facilities that the Kremlin could be interested in observing.

This level of access—the ostensible goals of which are to promote transparency in military activities and reduce the likelihood of a dangerous misunderstanding—has often been an issue in the United States. A number of members of Congress over the years have felt the agreement gives Russia outsized benefits, especially given the country’s limited satellite surveillance networks. Legislators, and senior U.S. military officials, have accused the Kremlin of abusing the treaty’s parameters to gather more serious intelligence data about highly sensitive locations. You can read more about this ongoing controversy here.

In recent years, the disputes had looked like they might completely upend the treaty. Since at least 2014, the Tu-214ONs, which are derived from the Tu-204 airliner, have been a particularly pointed issue. The U.S. government's official complaints centered on concerns about Russia's plans to equip them with digital cameras, including infrared-capable ones, and that it could be considering added synthetic aperture radar to the plane's sensor suite.

On Sept. 12, 2018, the United States went so far as to say it would refuse to certify the Tu-214ONs as treaty compliant, which would prevent them from flying any missions under the deal. This came right at the end of an extensive process to gain approval, which had begun after Russia first took delivery of the planes between December 2013 and July 2014.

However, the exact rationale for this remains unclear. The annual defense policy bill for the 2019 Fiscal Year, which Donald Trump signed into law in August 2018, had blocked the U.S. government from spending any money in the upcoming fiscal cycle on certifying Russia’s Tu-214ONs, unless the executive branch meets certain requirements. However, Fiscal Year 2019 only began on Oct. 1, 2018.

It's also hard to see how the U.S. government's stance could have actually been based on more technical considerations. The Tu-214ONs carry the exact same digital camera package that is on the latest iteration of the older Tu-154M-ON, which the U.S. government chose to certify without issue. The Kremlin long ago dropped plans to install a synthetic aperture radar capable of producing imagery, which had drawn particularly vocal protests from the United States, despite being allowed under the Open Skies Treaty.

All Open Skies flights had already been on hold in 2018 due to an entirely separate dispute between Georgia and Russia. The U.S. Air Force did conduct a mission in December 2018 over Ukraine, but using a provision of the treaty that allows for extraordinary flights in certain circumstances.

Whatever the case, the U.S. government relented on Sept. 19, 2018, announcing it would certify the Russian plans by the end of the month. Georgia and Russia subsequently resolved their issues, and the Tu-214ONs have already begun flying. RF-64525 conducted a flight over Spain in March 2019 that included bases with a significant U.S. military presence, such as the U.S. Navy's facilities in Rota.

With U.S. relations with Russia at an all-time low, the final appearance of the Tu-214ON over American skies could reignite criticism within Congress of the Open Skies Treaty and prompt new efforts to pull the United States out of the deal. The state of major arm control deals involving the two countries is fragile, in general.

Earlier in 2019, Russia formally announced it was suspending its participation in the Intermediate-Range Nuclear Forces Treaty, or INF. The United States had announced it was withdrawing from that landmark deal in 2018 over Russia’s fielding of a ground-launched cruise missile banned under that agreement. There are now serious questions about whether either party is interested in renewing the New Strategic Arms Reduction Treaty, or New START, which expires in 2021, unless both sides agree to renew it through 2026.

A lot of the response from Capitol Hill will be dependent on exactly where the Tu-214ON ends up flying over in the coming days. The War Zone will certainly be keeping an eye on its moves to and from Rosecrans throughout the week.