There appears to be some sort of large force exercise occurring over parts of Nevada and Utah. 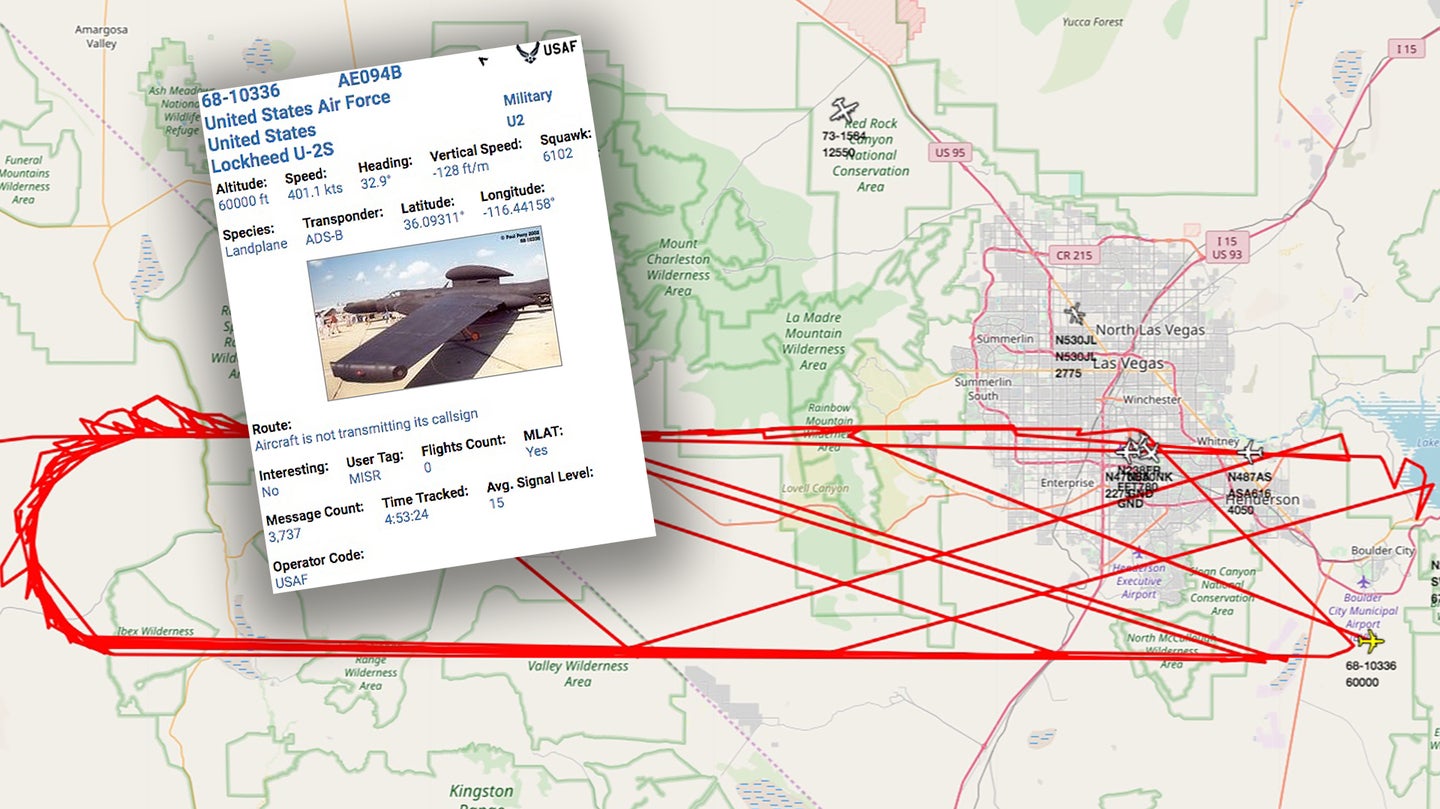 There appears to be a large-scale military exercise underway across Nevada and Utah. In the dead of night, a variety of U.S. surveillance and support aircraft have popped up over and around Las Vegas and Dugway Proving Ground west of Salt Lake City. The most interesting of the lot is a U-2 Dragon Lady serial number 68-10366, which is based out of Plant 42 in Palmdale, California and is normally used to test new U-2 payloads and configurations. The U-2 has been flying long tracks that cross over South Las Vegas for hours at an altitude of 60,000 feet. This is not a common flight profile for any U-2.

In addition to the Dragon Lady, an EC-130 Compass Call—the USAF's only dedicated electronic warfare platform—is lingering northwest of Las Vegas. An RC-135V Rivet Joint electronic and communications intelligence collection aircraft is also flying to the north of Las Vegas. A number of KC-135R tankers are present in the region, as well, ranging from east of Las Vegas up to near Salt Lake City.

No less than three HC-130J Combat King II combat search and rescue Hercules transports have also been launched out of Nellis AFB and are hanging out northeast of the Las Vegas.

Just west of Salt Lake, over and around Dugway Proving Ground, "FOCUS25" (seen as 99-0006 below), an E-8C JSTARS ground moving target indicator radar aircraft is orbiting, as well as an E-3 Sentry Airborne Warning And Control System with the callsign "DISCO05." Inside the range is a "SWORD62," a B-52H bomber. "BAJA15" is a KC-135 tanker.

All said, there are examples of the majority of the USAF's large information, surveillance, and reconnaissance (ISR) aircraft, as well as others, up over Nevada and Utah simultaneously. What's odd is that these aircraft aren't flying out over the Nevada Test and Training Range but are keeping closer to Las Vegas and the Dugway Proving Ground range complex. And keep in mind that these are just the large combat aircraft we are able to track, there are many we can't.

We aren't aware of any major exercises underway in the region at this time, but there has been high activity of Strategic Command bombers and their support tankers over the Midwest in recent days.

We will inquire to see if any information is available as to what training these aircraft are up to. It's not all that uncommon for details of such operations to come to light, especially when they are centered on or near urban areas.

NOTAMs and two sources state that this was exercise Neptune Falcon. You can read much more about this large strategic drill in this past piece of ours.