The light armored vehicles would offer special operations forces a better-protected means of getting around, especially during a large-scale conflict. 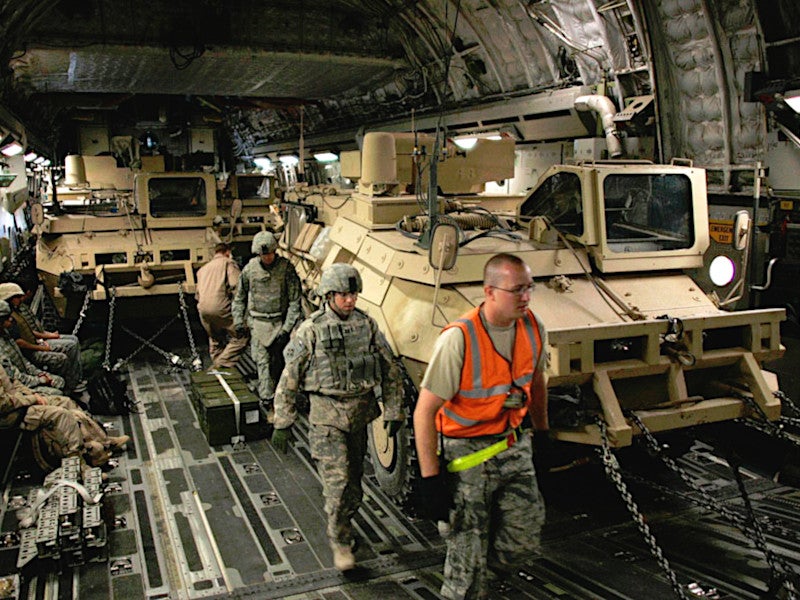 U.S. Special Operations Command has laid out the first basic requirements for a new light armored vehicle to give elite American forces added protection, firepower, and mobility over even their heaviest mine-resistant trucks. These would replace an obscure fleet of Austrian-designed wheeled armored vehicles that the U.S. Army’s Delta Force, among others, has utilized over the past two decades. They could also supplant the Stryker armored vehicles assigned to that service’s 75th Ranger Regiment, which made a notable appearance in northern Syria two years ago.

Kittinger's briefing notes that SOCOM is expecting to continue developing the requirements for the new armored vehicle, as well as looking at what existing options are available, into 2020. However, it does outline some key features that the special operations forces are looking for already.

The final design will have to be able to carry between nine and 10 passengers and have a total payload capacity of 4,500 pounds or more. The vehicle will have to fit inside a C-130-series transport aircraft, as well.

This is similar in many respects to the existing AGMS, which is a variant of the 6x6 Pandur I light armored vehicle that Austrian conglomerate Steyr-Daimler-Puch Spezialfahrzeuge, or SSF, first developed the in the 1980s. These vehicles have a crew of two and can carry seven additional personnel. They have a gross weight of around 30,000 pounds and are also C-130 transportable.

Beyond that, the requirements for the Next Generation AGMS call for an unspecified “heavy weapons capability” using a remote weapon station, and a desire for “improved situational awareness.” Though not specific, these both point to a demand for special operators to be able to operate effectively from within the confines of the vehicle with its hatches closed.

This would be a major boost in capability over the existing vehicles, which feature an open-topped, manned turret and have very limited visibility for any personnel within the vehicle. The current AGMS configuration does have the option to mount a fully-enclosed armored glass cupola for the driver that offers added protection and improved visibility for operations with their hatch open, but this still requires that individual to be more exposed than they would be if they were riding fully enclosed with the vehicle’s armored body.

A remote weapon station with an electro-optical and infrared targeting system would also offer the ability for added situational awareness while operating in a buttoned-down configuration, but only in the direction that the turret is facing. Added optics, or even a more advanced remote vision system consisting of cameras placed around the vehicle, would offer additional visibility. This would be valuable, especially in an urban environment, where threats might quickly pop up to attack a blind spot from one or more directions before darting back behind cover.

Improved situational awareness could also involve the installation of improved communications and networking capabilities. This would allow the crew to quickly share information about their position, enemy movements, and other items of interest to build a better picture of the battlefield around them.

A remote weapon station could be an easy path to adding increased firepower, as well. The original AGMS can only carry one heavy weapon, such as a .50 caliber M2 machine gun, 40mm Mk 19 automatic grenade launcher, or TOW anti-tank missile launcher at a time. As of 2017, at least one had received a remote weapon station of its own.

But the U.S. Army is now in the process of fielding newer and still relatively lightweight remote weapon stations that combine an M2 or Mk 19 with a Javelin anti-tank missile launcher. Depending on the exact design SOCOM chooses for its future vehicle, it might come equipped with a light automatic cannon.

But, if nothing else, the Next Generation AGMS program offers SOCOM a chance to obtain an overall more modern light armored vehicle and potentially expand the fleet size for what is a niche capability at present. Until U.S. special operations forces began receiving the first generation of mine-resistant ambush-protected (MRAP) armored trucks in the mid-to-late 2000s, the Pandur-based AGMS vehicles were the heaviest and best-protected means for these elite forces to get around.

The exact history of the AGMS is somewhat murky, as is that of its primary operator, Delta Force. This unit’s experience in Somalia in 1993, especially during the running battle in that country’s capital Mogadishu on Oct. 3-4, 1993, was almost certainly a contributing factor in its decision to acquire a light armored vehicle.

This event, in which Somali militia men notably shot down multiple Black Hawk helicopters, resulted in pockets of Delta operators and other American special operations forces scattered across the city. Attempts to use additional helicopters and a convoy of unarmored vehicles failed and the United States had to turn to the United Nations force in the country, which included contingents with light armored vehicles, for assistance.

In 1999, the Army awarded a $51 million contract to A.V. Technology, working with both General Dynamics Land Systems and SFF, for up to 50 AGMS. This team of companies reportedly only delivered 12 of the vehicles under this contract in 2000. SOCOM then received a second tranche of 11 vehicles in 2006.

Task Force Wolverine, with Delta Force in the lead, used the AGMS along with various other vehicles in the initial stages of the invasion of Iraq in 2003, according to Leigh Neville’s Special Operations Patrol Vehicles: Afghanistan and Iraq. The AGMS were involved in the infamous mission to recover U.S. Army Private Jessica Lynch after her convoy got ambushed by Iraqi forces on Mar. 23, 2003, during the Battle of Nasiriyah.

The vehicles continued to see use in the subsequent American-led occupation of Iraq, supporting operations to detain high-value insurgents.

An AGMS is seen at around 2:05 in the runtime of this montage of clips from the mission to recover U.S. Army Private Jessica Lynch from Saddam Hospital in Nasiriyah on April 1, 2003.

But even with the adoption of steadily more capable MRAPs, the AGMS has remained one of the more heavily armored vehicles organic to the special operations community and is certainly among the most capable of operating off-road. The only other traditional armored vehicles in service with U.S. special operations forces are the 8x8 Strykers within the 75th Ranger Regiment, which that unit received starting in 2005.

These Strykers continue to offer an important capability for special operations units, especially when operating in areas where there is a greater risk of encountering conventional forces with heavier weaponry. In 2017, the Rangers sent the vehicles to the area around the hotly contested northern Syrian city of Manbij.

There they helped keep a buffer between Turkish troops and U.S.-backed Kurdish forces, while also offering added protection against potential attacks from elements aligned with Syrian dictator Bashar Al Assad. Though not as widely reported on at the time, at least two AGMS were also spotted in Syria in 2017, too.

An AGMS equipped with a TOW missile launcher is seen in a larger American convoy in northern Syria near the end of the video below.

With the U.S. military refocusing on preparations for large-scale conflicts against “great power” competitors, such as Russia and China, there could be an increased demand for this type of armored vehicle within the U.S. special operations community. Increased concerns about the possibility of a major armed confrontation after Russia invaded Ukraine’s Crimea region in 2014 has already led to an armored vehicle renaissance among conventional American units.

None of this is to say that special operations forces will be launching full-on armored assaults in the future. But a Next Generation AGMS would provide them with better protection and firepower that could be useful for conducting unconventional warfare operations against more conventional opponents, as well as just executing general movements on the sidelines of any future large conflict.

Though it’s too early to tell what vehicles SOCOM might be interested in for its next light armored vehicle, it might make sense in the interim to simply acquire additional Strykers. These vehicles are in production and have benefited from a variety of Army-funded upgrades.

Another option might be to acquire lighter 8x8 LAV-25 vehicles from the U.S. Marine Corps. The Army’s 82nd Airborne Division has already gone this route as part of its effort to add additional protection and firepower during airborne operations.

Both of these vehicles are significantly larger than the Pandur, which might make them less attractive as a direct replacement for the AGMS. A new vehicle with a similar footprint to the existing AGMS could have the advantage of being able to operate more discreetly than a larger design, as well as maneuver through tighter spaces, especially in an urban environment. A lighter vehicle might also be easier for special operations forces to support logistically, especially during extended duration operations separated from more established supply lines.

Regardless, SOCOM says it wants to formally begin the process of acquiring the Next Generation AGMS sometime between 2022 and 2023. It will be interesting to see how the special operations community’s requirements and expectations for its next light armored vehicle evolve and solidify in the coming years.