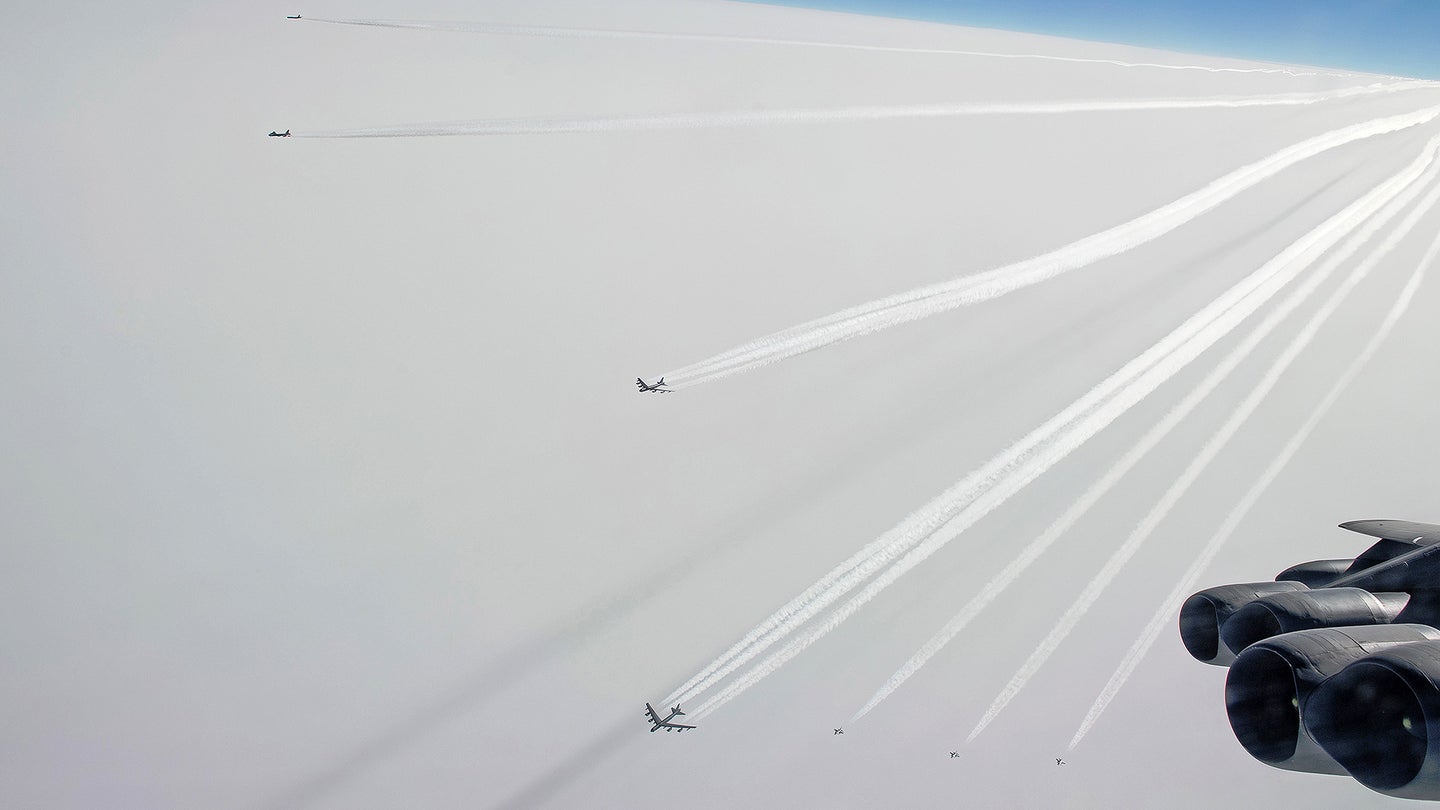 The U.S. Air Force has released some gorgeous shots of B-52Hs flying with Norwegian F-16 Viper fighter jets over the Norwegian Sea, including uncommon shots of five of the bombers flying together above the clouds. The lumbering aircraft have been flying training missions across Europe from RAF Fairford in the United Kingdom for more than two weeks as part of a regional deployment.

The flight over the Norwegian Sea occurred on Mar. 28, 2019 and involved five B-52Hs together with a pair of Royal Norwegian Air Force F-16AMs and a lone two-seat F-16BM. The Bomber Task Force consisting of six B-52Hs, also commonly called BUFFs, for Big Ugly Fat Fellows, first arrived at RAF Fairford on Mar. 14, 2019. All of the bombers are from the 2nd Bomb Wing at Barksdale Air Force Base in Louisiana.

The flights with the Royal Norwegian Air Force F-16AM/BMs gave the bomber crews an opportunity to familiarize themselves with operating in that part of the world and "to demonstrate U.S. commitment to allies and partners through the global employment of our military forces," according to an official Air Force statement.

"Training with joint partners, allied nations, and other U.S. Air Force units contributes to our ready and postured forces and enables us to build enduring and strategic relationships necessary to confront a broad range of global challenges," the service had said when the bombers first touched down in the United Kingdom.

So far, the B-52s have flown missions with a number of NATO members in and around the Norwegian Sea, the North Atlantic Ocean near Iceland, the Baltic region, and even in the Mediterranean Sea off the coast of Greece. The Air Force has said some of these missions, such as the ones off Iceland, have included mock strikes on surface targets.

The deployment is clearly meant to be a signal of the U.S. military's strategic capabilities to American's "great power" competitors, primarily Russia. Though the Air Force has regularly sent small detachments of B-52s to the United Kingdom for training exercises throughout Europe over the years, having six of the bombers there at once is the single largest deployment of the BUFFs to the region since the invasion of Iraq in 2003, according to Military.com. During the opening phases of that conflict, 20 B-52s flew strike missions from the United Kingdom.

Sending the bombers to RAF Fairford is just the latest in a string of increasing U.S. military activity that seems pointed straight at the Russians and reassuring NATO members in the face of the Kremlin's threatening stance toward the alliance. Most notably, in October 2018, the North Atlantic bloc held its largest multi-national exercise in decades, Trident Juncture, which also took place in and around Norway. As part of those drills, the U.S. Navy sailed a carrier strike group above the Arctic Circle for the first time in nearly 30 years.

The Kremlin has been decried the bomber deployment and was particularly sensitive about the B-52s flying over the Baltic Sea near its the Kaliningrad enclave. Kaliningrad is geographically separated from the rest of Russia and contains a number of key Russian military installations, including a warm water port that serves as the home of the country's Baltic Fleet.

“On March 15, 2019, a US Air Force B-52 aircraft with the transponder switched on performed a flight over international waters of the Baltic Sea parallel to Russia’s territorial waters,” the Russian Ministry of Defense said in on Mar. 16, 2019. “The plane did not approach Russia’s border closer than 150 kilometers [93 miles] and turned around immediately after Russian air defense systems on combat duty tracked it.”

The clear implication was that the bombers were practicing for mock attack runs on the enclave, akin to the accusations Norway has leveled at Russia over apparent simulated strikes on a secretive radar installation near the town of Vardø. But while the Norwegian government has provided evidence of the Kremlin's activities, there is no clear indication that the B-52s conducted any overly aggressive maneuvering in the Baltic.

At its widest, the distance between Kaliningrad and the Swedish coast on the other side of the Baltic is less than 200 miles. To say that the bombers were flying 100 miles away could easily put them closer to Sweden than to Russian territory and it would be hard to otherwise fly through the area in international airspace without coming this close to the enclave.

Whatever happened on Mar. 15, 2019, didn't deter the Americans from returning a week later, when the Air Force said the B-52s operated continuously in the Baltic for a 24-hour period. During that particular training mission, Russia sent Su-27 Flanker fighter jets to shadow some of the B-52s for a period of time.

However, these intercepts have been much less notable than when another Flanker conducted an epic photo bomb over the Baltic in 2017. In that instance, the Russian jet snuck into formation with a large number of aircraft, including a B-52 and a B-1B bomber, that NATO had assembled as part of a media photo op. At the time, the Air Force had B-52s, B-1B Bones, and B-2 Spirits deployed to Europe, the first time all three had been in the region since 2009.

Not to be outdone by these latest U.S. bomber exercises, on Mar. 29, 2019, the Russian Ministry of Defense announced that two Tu-160 Blackjack bombers had conducted a 13 hour-long patrol in the Barents Sea near Norway and the North Sea near the United Kingdom. In the latter case, the bomber's presence prompted the U.K. Royal Air Force to scramble jets to intercept and monitor the bombers.

The Air Force has not said how much longer the B-52s will remain deployed in Europe, but hopefully we'll get even more impressive shots of the bomber task force at work in the future.