This Gun Paired With New 6.8mm Ammunition Could Be The Army's Next Standard Issue Rifle 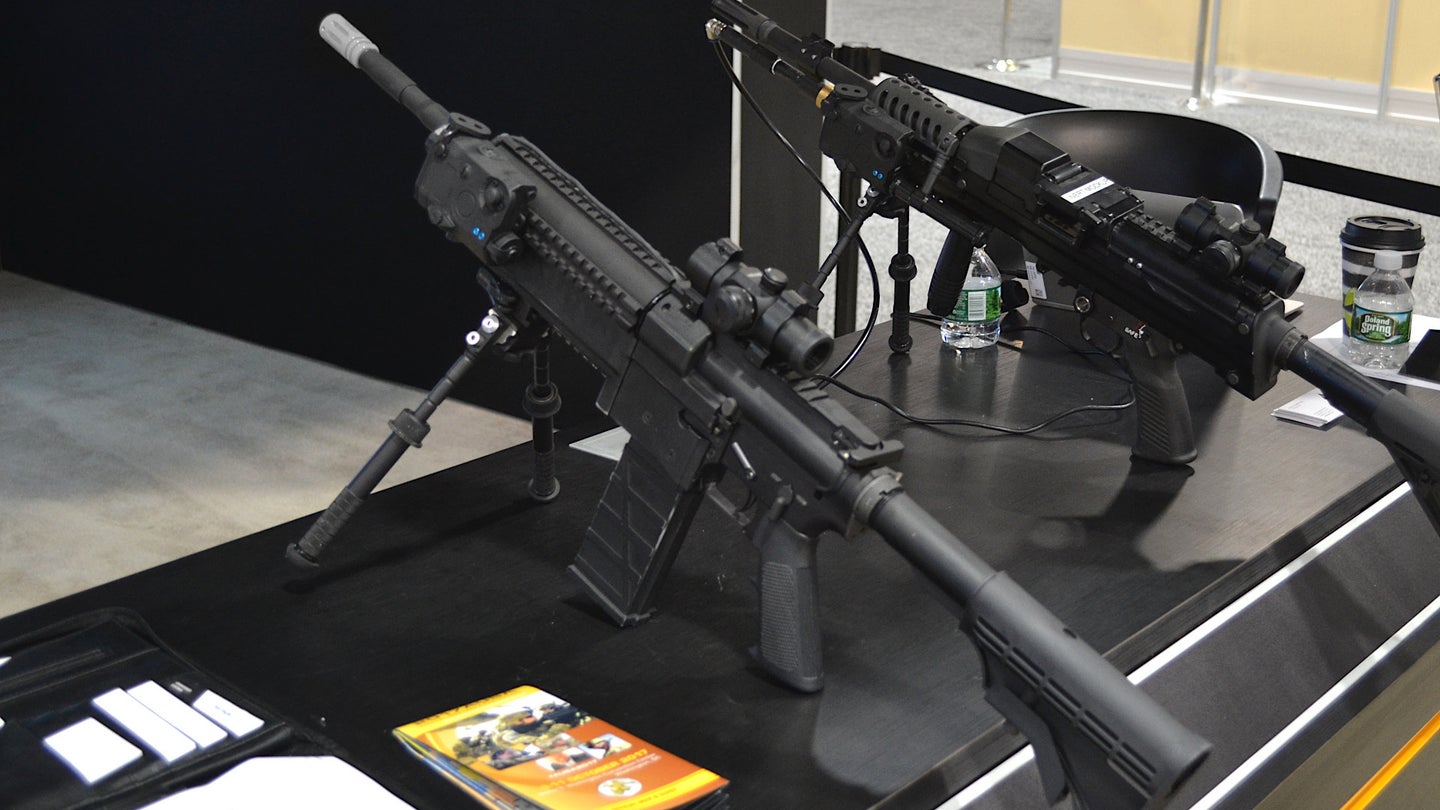 Textron says it has delivered the first prototype of what could be the U.S. Army’s next standard-issue rifle, which will replace its M4 carbines, for testing. The company also says its design could be a springboard for more advanced small arms developments in the future.

The Rhode-island headquartered defense contractor’s AAI Corporation subsidiary is the one in charge of the conglomerate’s submission for what Army refers formally as the Next Generation Squad Weapons program (NGSW). This effort includes plans for a new infantry rifle to take the place of the M4, or NGSW-R, and an automatic rifle replacement for the M249 Squad Automatic Weapon (SAW), known as the NGSW-AR.

AAI’s delivery, which Textron announced on Mar. 25, 2019, is a technology demonstrator, known as the NGSW-Technology, or NGSW-T. It is the first of five guns that it will eventually supply to the Army as part of this initial phase of the NGSW-R competition. The service's latest budget request for the 2020 Fiscal Year asks for more than $30 million to support the ongoing research and development.

We don’t know exactly what AAI’s design looks like, but an official press release stated that it leverages nearly 15 years of the company’s work on advanced small arms using what is known as cased-telescoped (CT) ammunition. In a traditional small arms cartridge, the bullet itself sits in place at the top of a metallic case filled with gunpowder. CT ammunition nestles the bullet inside the case with the gunpowder, shortening its overall length, which in turn allows for the length of the overall weapon to be more compact. It also makes the rounds themselves more compact, reducing the physical space required to store it, in magazines or elsewhere, reducing the burdens on troops and logistical chains.

However, the Army’s NGSW requirements call for any submissions to use a special 6.8mm cartridge, known as the XM1186, which has a traditional configuration. This new round promises to have better range, improved accuracy at longer distances, and greater armor penetration capability over the existing 5.56x45mm ammunition the service uses now. The Army's 2020 Fiscal Year budget request says the service is also developing a "special purpose" variant of the 6.8mm round, known as the XM1184, but does not explain how the two cartridges differ.

AAI publicly unveiled a CT rifle design in 2018, which would be the obvious starting place for its gun chambered in the Army’s desired 6.8mm ammunition. The existing weapon has a general shape very similar to the service’s existing M4 carbine and features many of the same controls as other AR-15/M16-series firearms and derivatives, including the fire control selector and t-shaped charging handle.

This general commonality with the Army’s existing standard issue weapon could make it particularly attractive. Any time a major U.S. military service adopts a new rifle, it's not only a major logistical undertaking, but one that puts significant strains on training, as well.

If what is known as the manual of arms – the typical actions associated with operating the gun, such as firing it, using its various controls, and clearing jams – between the M4 and whatever the Army adopts next remain largely the same, it would make it infinitely easier to integrate it into basic training and transition existing units to the new guns. The service says the new rifles will also feature standard rail accessories attachment points, allowing personnel to use existing lights, visible and infrared laser pointers, vertical forward grips, and other add-ons.

There is also a requirement for the guns to be able to accept a suppressor, something typically associated with special operations forces that is now looking to become more of a standard issue item for regular combat units. Suppressors, which help eliminate muzzle flash and reduce the sound of firing, can help conceal friendly forces from the enemy, especially at night, and help reduce the overall din of battle, making it easier for troops to communicate. “It's [6.8mm] a higher caliber and a louder system, so the suppressor will help operationally,” Arthur Fiorellini, the NGSW program team leader at the Army’s Armament Research, Development and Engineering Center, told Task & Purpose in February 2019.

The Army is looking to add more complex technologies to the future, too. The most significant of these proposals is to develop a miniaturized ballistic computer, or a similar aid, to help soldiers quickly and accuracy engage their targets, even at extended ranges.

AAI is certainly hoping that its previous experience and work directly with the Army in the past will give it a leg up in the competition, as well. Over the past 14 years, the firm has supplied a number of prototype squad automatic weapon demonstrators, using both CT and completely caseless ammunition, to the service for testing.

The service seems inclined to agree. In 2018, it rated the company’s submission for the automatic rifle component, then known as the Next Generation Squad Automatic Rifle (NGSAR), as exceeding its demands both in terms of general concept and feasibility. None of the other entrants – General Dynamics, FN, PCP Tactical, and Sig Sauer – received this rating.

AAI remains separately in the running for the revised NGSW-AR program, which will also fire the Army’s 6.8mm ammunition. The company’s pitch also seems to include a roadmap to potentially transitioning to CT ammunition, or maybe even caseless ammunition, at some point in the future.

“Moving from contract award to delivery of a revolutionary, next-generation weapon in just 15 months not only demonstrates the maturity of our CT technology, but also the project execution excellence our team possesses to rapidly fill critical warfighter needs on schedule,” Textron Systems Senior Vice President of Applied Technologies & Advanced Programs Wayne Prender said in a press release on Mar. 25, 2019. “Our CT weapons and ammunition offer the growth path to a true next-generation small arms weapon for U.S. warfighters, including increased lethality at longer ranges, while also delivering significant weight reductions to the warfighter.”

AAI’s existing CT ammunition design is not only shorter, but it also uses a polymer case. This means that in addition to its compact physical shape, it is also lighter weight compared to metal-cased ammunition.

The scope of the NGSW program can only produce stiff competition for AAI, though. The prospect of winning contracts to replace hundreds of thousands of rifles across the US Army is too lucrative for most established firearms companies to pass up. If the longevity of the AR-15/M16 family in U.S. military service is any indication, it could set up the winner for years of support contracts, as well. Other services, such as the Marine Corps, could end up under pressure to adopt the new guns, too.

Sig Sauer is preparing to submit a version of its increasingly popular MCX line, derived from the AR-15/M16 family, if it hasn’t already. The other entrants in the automatic rifle portion of NGSW program are no doubt crafting complimentary infantry rifle designs.

These could come along with other novel ammunition concepts, as well. The Army is asking individual competitors to supply their own 6.8mm ammunition, as well as candidate guns. For instance, Sig Sauer has already shown a hybrid case design with a brass body on top of what could be a steel base, to reduce weight and cost. PCP Tactical, which has still yet to publicly show its prospective designs for either the infantry rifle or automtic rifle components of the NGSW program, is better knonw for producing lightweight polymer-cased ammunition rather than firearms, too.

It’s also worth noting that this isn’t the first time the Army has sought to adopt a new standard infantry weapon in an improved caliber. This is a saga that has been going on for more than a decade, which you can read about in more detail here.

Still, the service’s current leadership is adamant about modernizing and improving the lethality of its forces across the board, moving away from updating existing systems to fielding new ones. NGSW is very in line with this general thinking and the Army has an aggressive timetable in mind for fielding both the new infantry rifles and automatic rifles, with a goal of equipping the first unit with the new weapons by 2022.

With testing set to begin this year on all of the technology demonstrator prototypes, we may not have to wait long to see which designs the Army sees as leading contenders to become its next standard-issue rifle.