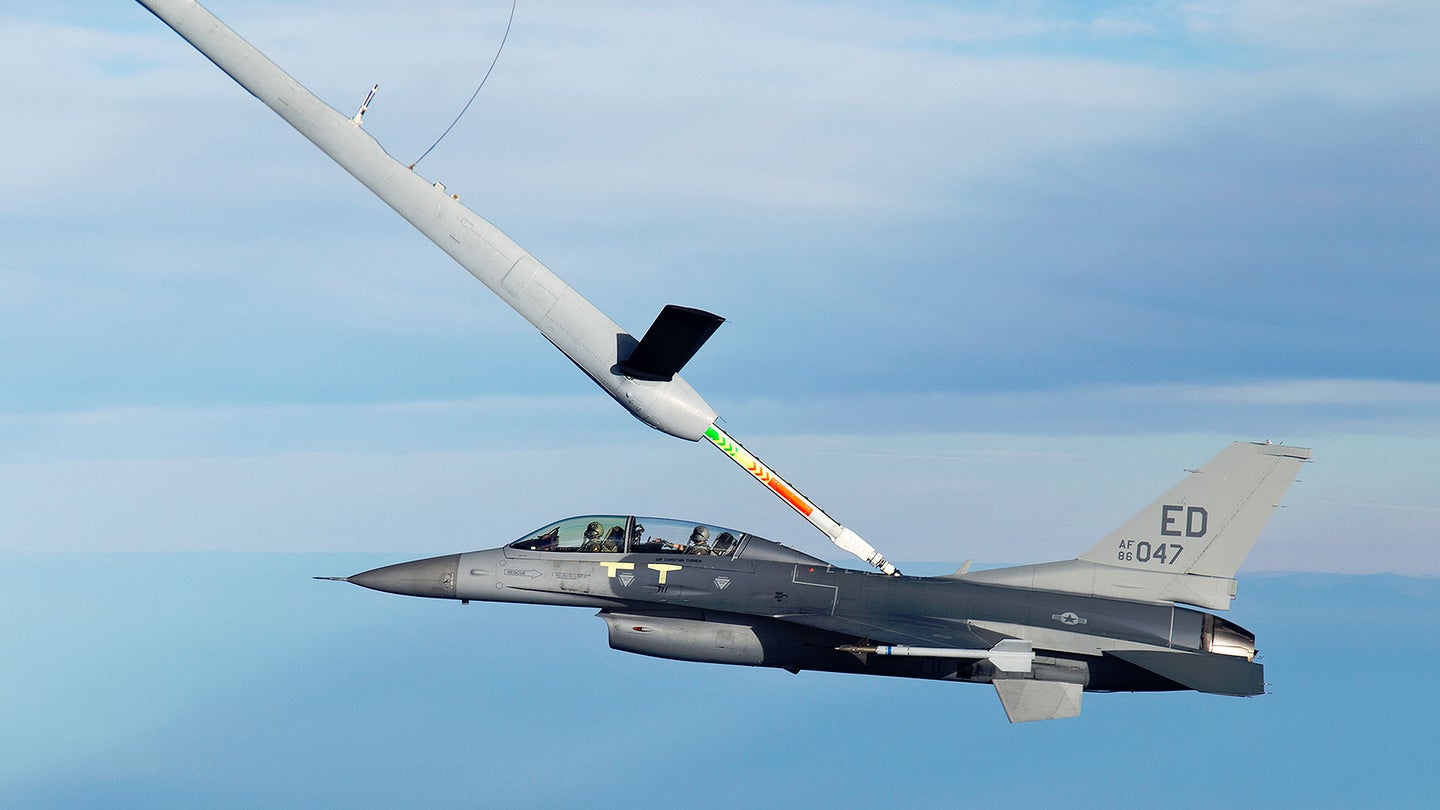 The U.S. Air Force’s top acquisition official says that the next-generation aerial refueling tanker, commonly referred to as KC-Z, will very likely be unmanned. This comes as the service’s latest budget request reveals plans to develop and test a podded refueling boom that could go on a future tanker drone.

Aviation Week was first to report these developments on Mar. 21, 2019, after an interview with Will Roper, the Assistant Secretary of the Air Force for Acquisition, Technology and Logistics. The details on the podded boom project were inside a line item covering “Next Generation Aerodynamic Technologies” in documentation related to the Air Force’s most recent budget request for Fiscal Year 2020, which the service made publicly available on Mar. 18, 2019.

“We can see it in the tea leaves,” Roper told Aviation Week about the future tanker. “If KC-Z isn’t autonomous, I’ll be really surprised.”

The Air Force has not publicly announced firm requirements for KC-Z, though it was set to complete a capabilities-based assessment of the program by the end of 2018, according to Aviation Week. This assessment would help the service determine what it is actually looking for in a future tanker.

Earlier in March 2019, U.S. Air Force General Maryanne Miller, head of Air Mobility Command, said it would take another year for the service to lay out its desired capabilities for KC-Z. She added that it was too early to say if the aircraft would be manned or unmanned and said it wouldn’t be stealthy, according to Air Force Magazine. In January 2019, Air Force Chief of Staff General David Goldfein had also made a bizarre claim that the next tanker might operate in space.

But KC-Z, which the Air Force plans to have in production by 2027, will have to incorporate design elements to protect it from the ever-increasingly capable integrated air defenses, advanced combat aircraft, and supporting sensors and networks that America’s “great power” competitors, such as Russia and China are developing for themselves and, in some cases, looking to export. Traditional airliner-derived tankers, such the Air Force's KC-135s, KC-10s, and new KC-46A Pegasuses, will only become more vulnerable and need to operate further away from the actual fighting as time goes on.

In addition, modern combat aircraft have proven to be fuel hungry and stealth combat jets, such as the F-35 Joint Strike Fighter, cannot carry extra gas in drop tanks and remain in their full-stealth mode. Even that added fuel would not be able to take the place of having tankers on call, especially for missions penetrating deep into enemy territory. This makes it hard to imagine that KC-Z, which the Air Force expects to be working together with its future sixth generation Next Generation Air Dominance (NGAD) combat aircraft, will be able to avoid operating in higher-risk areas entirely.

The War Zone has repeatedly highlighted the need for a stealth tanker to meet these threats and features that will reduce the aircraft’s radar and infrared signatures still seem like very important features to have. Other self-protection capabilities, such as advanced electronic warfare systems and hard-kill anti-missile systems, which use either physical interceptors or directed energy weapons, are also in development now, as well.

These could potentially be used instead of a low-observable design, but there are still big tradeoffs in terms of survivability in certain scenarios—like penetrating into or very near contested airspace for any significant period of time—by eschewing a stealthy airframe design. A balanced approach, where some low-observability is packaged with these other capabilities may be optimal.

We already know that the Air Force has been evaluating manned designs with hybrid and blended wing body planforms from Boeing and Lockheed Martin as possible starting places for KC-Z for years. According to our sources, the Air Force also once investigated turning Northrop Grumman’s B-2 stealth bomber into a tanker and that company’s forthcoming B-21 Raider could potentially serve as the basis for a “KB-21” aerial refueler.

Unfortunately, the need for an aerial refueling boom, the Air Force’s primary means of mid-air refueling, also presents significant challenges for an aircraft trying to keep a stealthy profile. This is where a tanker drone might come in.

Back in September 2018, a representative of Lockheed Martin’s Skunk Works advanced projects division told The War Zone that the company had proposed a fleet of smaller tanker drones as an alternative concept. The Maryland-headquartered defense contractor had already developed a small unmanned aerial refueler design as part of its bid for the Navy’s MQ-25 Stingray tanker drone program. Boeing ultimately won that contract with a stealthy pilotless aircraft.

A fleet of smaller unmanned tankers could support a more distributed aerial refueling concept that supports aircraft in higher risk areas and also makes it more difficult for an opponent to hunt down and eliminate the refuelers. These tanker drones might also work in concert with manned stealthy or non-stealthy tankers, with the larger aircraft refilling the unmanned ones in lower-risk areas forming a sort of high-tech bucket brigade to refuel jets in more densely defended areas. Operating a mixed fleet that includes larger, manned platforms would help ensure that the Air Force doesn't lose the often overlooked, but important cargo-carrying capabilities of its present aerial refueling tankers, too.

The Air Force also plans to begin work on a podded aerial refueling boom system in the 2020 Fiscal Year, according to its latest budget request. The service will “initiate the design of a small, pod-mounted tactical air refueling boom for future Mobility applications,” the budget documents explain. The Navy's future MQ-25 Stingrays will also use a podded system, but one that supports the far less mechanically complex probe-and-drogue refueling method.

Depending on the configuration of this podded boom, it might be possible for the carrying platform to keep it stowed in a less conspicuous and stealthier manner until necessary, helping to keep the aircraft concealed from enemy defenses. Existing drones with stealthy features, such as General Atomics’ Avenger, already feature retractable sensor turrets and internal payload bays to keep as low-observable as possible during transit to and from a specific location and while operating over contested territory. There have been proposals for stealthy weapons pods or conformal payload bays as means to reduce the radar signature of non-stealthy combat jets in the past, as well.

The boom, by itself, allows for a faster transfer rate, reducing the total time the tanker and the receiver aircraft would have to be linked together and more vulnerable. Boom-equipped tankers can also more rapidly refuel a larger number of receiver aircraft. Still, refueling a manned, or possibly unmanned aircraft, from a boom on a drone might present its own challenges, something Assistant Secretary Roper acknowledged while talking with Aviation Week.

The Air Force has already successfully demonstrated that a drone can refuel via boom from a manned tanker, but conducting the procedure in reverse, as well as just building a boom that fits in a pod at all, could be a tall order. Booms have to be robust and allow for delicate, precise movement, telescoping in and out and being able to traverse over a relatively wide field of movement. A boom striking or scraping the receiving aircraft wouldn't be great to begin with, but for stealth aircraft, which have sensitive coatings to help reduce their radar signature, it could be especially problematic. This has already been a problem with the remote-operated boom on the new KC-46A.

An autonomous refueling procedure where both aircraft would digitally "talk" via data links and join up automatically could be essential if the podded boom is shorter and has less flexibility. But it's a set of systems that would have to work extremely reliably to support actual combat missions where the transfer of fuel can literally mean life or death or a critical mission's success or failure.

On top of that, a single smaller drone would not come anywhere close to being able to fill the tanks of the Air Force's largest aircraft, including heavy bombers such as the B-21 and transports like the C-17. There could also be concerns about the increased risk of dangerous physical interactions between smaller drone and a larger receiver aircraft, and the potential for major accidents as a result, during refueling. All of this could limit its utility for these larger "customers."

Roper added that the experience with the much-troubled KC-46A Pegasus tanker program, a saga you can read about in more detail here, was also laying the groundwork for drone carrying a boom that an actual person might operate remotely. This is an arrangement that would also require very robust data links to ensure its reliability. The KC-46A's Remote Vision System (RVS) system to operate the boom has proven to be far less than reliable itself.

Unlike previous Air Force tankers, where a boom operator lays in the rear and guides the boom into the receiving aircraft, the KC-46A puts this individual in the main cabin, where they use the RVS to perform this task. The RVS consists of a number of cameras positioned at the rear of the plane that produces a stereoscopic video feed that blends two-dimensional and three-dimensional imagery together.

The video below shows elements of Boeing's KC-46 simulator, which includes a simulated version of the RVS.

This was supposed to give the boom operator a high-fidelity and extremely accurate understanding of the situation. In practice, this has been anything but the case and Boeing has now agreed to completely redesign the system, work that both it and the Air Force expect will take around two years to complete.

But “in fixing the RVS we now have the knowledge in the Air Force to know how to go out and request an autonomous tanker,” Roper told Aviation Week. “Not just say, ‘give it to us,’ but specifically put on contract what we want to see.”

Roper has been a major advocate for the increased development of unmanned capabilities across the Air Force in general, too. Less than two weeks ago he announced a new initiative to develop an advanced artificial intelligence system, called Skyborg, that could eventually support a fleet of “fighter-like” drones. Any future unmanned tanker could find itself working together with a mix of manned and unmanned platforms, as well.

It's important to note that while the Air Force is working on defining what it actually wants from KC-Z, it is also looking at outsourcing a large part of its air-to-air refueling requirements. In December 2018, Lockheed Martin and Airbus announced they would be collaborating to pitch various proposals to the service, including ones based on leased or contractor-owned and operated A330 Multi-Role Tanker Transport (MRTT) aircraft.

This raises questions about the exact tanker fleet mix the Air Force will want in the future and whether it might favor purchasing smaller systems, such as an unmanned platform, versus larger types going forward. Investing in a new tanker drone design and procuring a significant number of them could mean buying fewer additional large aerial refuelers, resulting in less capacity to support bigger bomber and cargo aircraft. A contractor-operated solution might make even more sense then to help ease the strain on the Air Force's organic airliner-sized tankers.

With the Air Force in the process of ironing out the KC-Z requirements now, we will hopefully be getting more details about the program’s objectives and the possible aircraft configurations and force mix in the near future. But the chances that it will at least include an unmanned component seem to be growing by the day.