They are a low-cost addition to ships’ layered defenses used to counter anti-ship missiles and the Royal Navy want to invest in improved models. 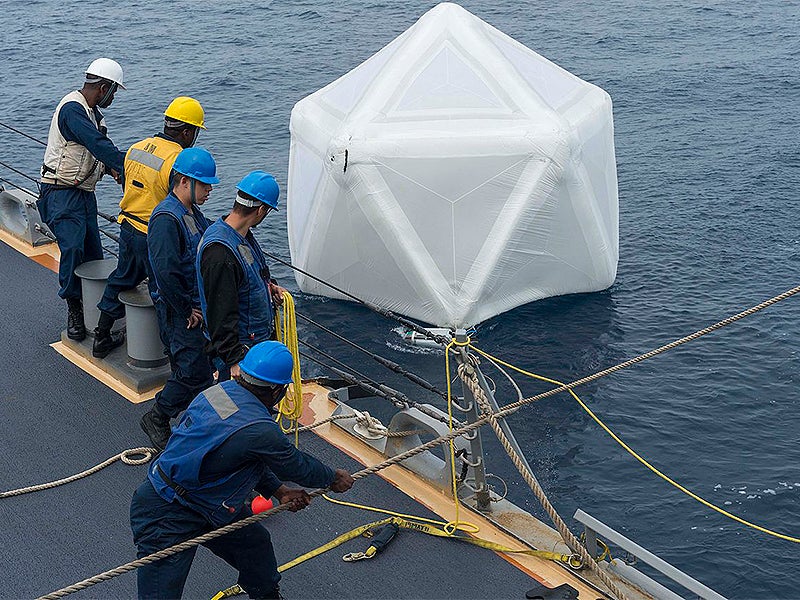 The U.S. Navy's Arleigh Burke-class destroyers have a comprehensive suite of defenses to shield against anti-ship missiles, including chaff canisters, active decoys that generate confusing electromagnetic signatures, electronic warfare suites, and “hard kill” close-in weapon systems. But they also have the ability to launch passive radar-reflecting decoys that inflate like a huge, oddly-shaped beach ball to entice incoming missiles, a system that came by way of the United Kingdom. Now, the U.K. Royal Navy, which was first to adopt these decoys, is looking to buy an improved design as it looks to expand its global reach.

Jane’s 360 was first to report the United Kingdom was looking for a new floating decoy as part of a program known as the Naval Passive Off-Board Decoy (N-POD), on Mar. 3, 2019. This new system will replace the existing IrvinGQ Outfit DLF-3B that the Royal Navy uses at present across various classes of warships and smaller craft, including offshore patrol vessels and minesweepers. This is the same one the U.S. Navy has on its Arleigh Burkes, but the service has given it its own designation as the Mk 59 decoy launching system.

The U.K. Ministry of Defense’s Defense Equipment and Support (DE&S) office announced it was “considering replacing the current floating offboard decoy system … with a similar system,” in a notice on Feb. 18, 2019, according to Jane's. However, the exact requirements are classified "Secret-U.K. Eyes Only," which also prohibits bids from companies outside of the country.

The existing DLF-3B, also known variously as the Inflatable Decoy System 300 (IDS 300) or Floating Decoy System 3 (FDS3), consists of launchers on the ship’s deck, each containing an un-inflated hexagonal decoy. When fired, the lid of the launch canister, which also includes the inflation system, pulls the decoy out and into the water.

After the decoy inflates, the lid acts as a drag anchor to keep it relatively stable. The decoy itself is made of a highly radar-reflective material that confuses and distracts incoming anti-ship missiles. It may even be enough to “seduce” the incoming threat to home in on and hit the decoy directly. It can remain afloat for more than three hours.

The system is relatively simple to install and links directly to the host ship’s own power supply. It also has a manual launch mode in case of a power loss.

Though we don’t know for sure, the U.K. Ministry of Defense’s call for a “similar system” and one that is still passive, suggests that the new N-POD will provide a similar type of defense, but with various improvements. These could include a shell made of materials more adept at bewildering radar seekers on incoming missiles, a shape that is also more enticing to those threats, or features that allow the decoy to inflate faster and remain afloat longer, even in poor weather.

The DLF-3B, as its name would imply is already the fourth iteration of IrvinGQ’s decoy system. The original DLF-1 was actually a direct copy of a Soviet design and featured a spherical decoy, which saw only very limited service. This was followed by the more angular DLF-2 and -3, which also incorporated lessons learned from the Royal Navy’s experiences during the Falklands War.

During the Falklands, Argentinian forces sunk or damaged a number of British ships with French-made Exocet anti-ship missiles, as seen in the video below. These strikes, along with other lessons learned during the conflict, prompting a significant reassessment of Royal Navy shipboard air and missile defenses in the years that followed.

In the 1980s, the U.S. Navy was seeing risks posed by anti-ship missiles itself. In 1987, an Iraqi Mirage F1 fired Exocet missiles at the U.S. Navy's Oliver Hazard Perry-class frigate USS Stark sailing in the Persian Gulf on the sidelines of the Iran-Iraq war, killing 37 sailors and injuring 21 more. The following year it began trials of earlier model DLF-series decoys, eventually adopting these as the AN/SLQ-49 decoy system, which subsequently earned the nickname "rubber duck."

By the 1990s, British surface ships from its Type 42 destroyers to small offshore patrol vessels all had provisions for DLF-series decoys, though they were often only actually installed based on the potential risk of attack. The U.S. Navy had similarly installed the AN/SLQ-49 on all major surface combatants, including its aircraft carriers, as well as various large auxiliary vessels.

In the aftermath of the Cold War, American warships steadily saw their rubber ducks withdrawn from service as the apparent threat of a major naval confrontation appeared to recede. The decoys continued to be available for ships throughout Royal Navy, as necessary, though.

At the same time, the threat of anti-ship cruise missiles has only expanded in size and scope. Major potential adversaries, such as Russia and China, continue to develop more capable, faster-flying, and longer-range air-, sea-, and ground-launched types. Smaller nations, such as Iran, also have growing anti-ship missile arsenals and the threat is proliferating down to even non-state actors.

The United Kingdom is also hoping to expand its own naval capabilities and its maritime presence globally, including sending ships to places such as the hotly contested South China Sea. China has been building up an archipelago of man-made islands in this region with various shore-based defenses, including anti-ship missiles.

These plans for an expanded maritime force posture only increase the demand for new and improved anti-missile defenses. DLF-3B will already be a feature on the Royal Navy’s future Type 26 frigates and the improved N-POD could offer some additional protection for the United Kingdom’s new and woefully under-defended supercarrier HMS Queen Elizabeth.

Of course, the DLF-series of decoys only provide a defense against radar-guided missiles and would not necessarily be able to defeat weapons with multi-mode guidance systems, including imaging infrared seekers. N-POD could have similar limitations. But they’re also supposed to be just one component of a layered defensive arrangement that includes other active and passive defense systems, such as chaff canisters, active decoys that generate their own confusing electromagnetic signatures, electronic warfare suites, and “hard kill” close-in weapon systems.

The DLF-series of decoys have offered a cost-effective addition to those other defenses, with earlier systems, consisting of eight decoys in pairs positioned around a ship, reportedly costing as little as $100,000 in total. Even the improved N-POD is likely to be cheaper than many other defensive options available on the market. Individual Nulka decoys, in service with the U.S. and Australian navies, which actively produce a signature similar to that of a large warship to distract incoming anti-ships missiles, cost more than $1 million each, according to recent U.S. Navy budget documents.

Presented with this reality itself, the U.S. Navy began using inflatable decoys again in 2013. That year, the service started installing the DLF-3B system on Arleigh Burke-class destroyers. It's not clear if other American ships have received the system since then, as well.

It is very possible that the United States could follow the United Kingdom's lead again with the N-POD program. The United Kingdom might also seek to work together with other allies and partners who might be interested in the decoys.

As part of its aforementioned plans to increase its posture in the Pacific region, the U.K. Ministry of Defense has notably touted its relationship with its Australian counterpart, which are in the process of acquiring new destroyers and frigates that could be in need of added and improved defenses in the face of increasing regional challenges from the Chinese People’s Liberation Army Navy. NATO members France, Italy, and The Netherlands have purchased DLF-series systems in the past, as well, and could be interested in an improved version given growing concerns about potential threats from Russia.

At present, the U.K. Ministry of Defense hopes to have the first N-POD systems in service by 2023, according to Jane’s. The Royal Navy would then look to reach full operational capability with the decoys two years after that.

It will be interesting, figuratively and literally, to see how this new decoy system takes shape.

The United Kingdom says new forward-deployed task forces will use to ships to ‘make Global Britain a reality.’