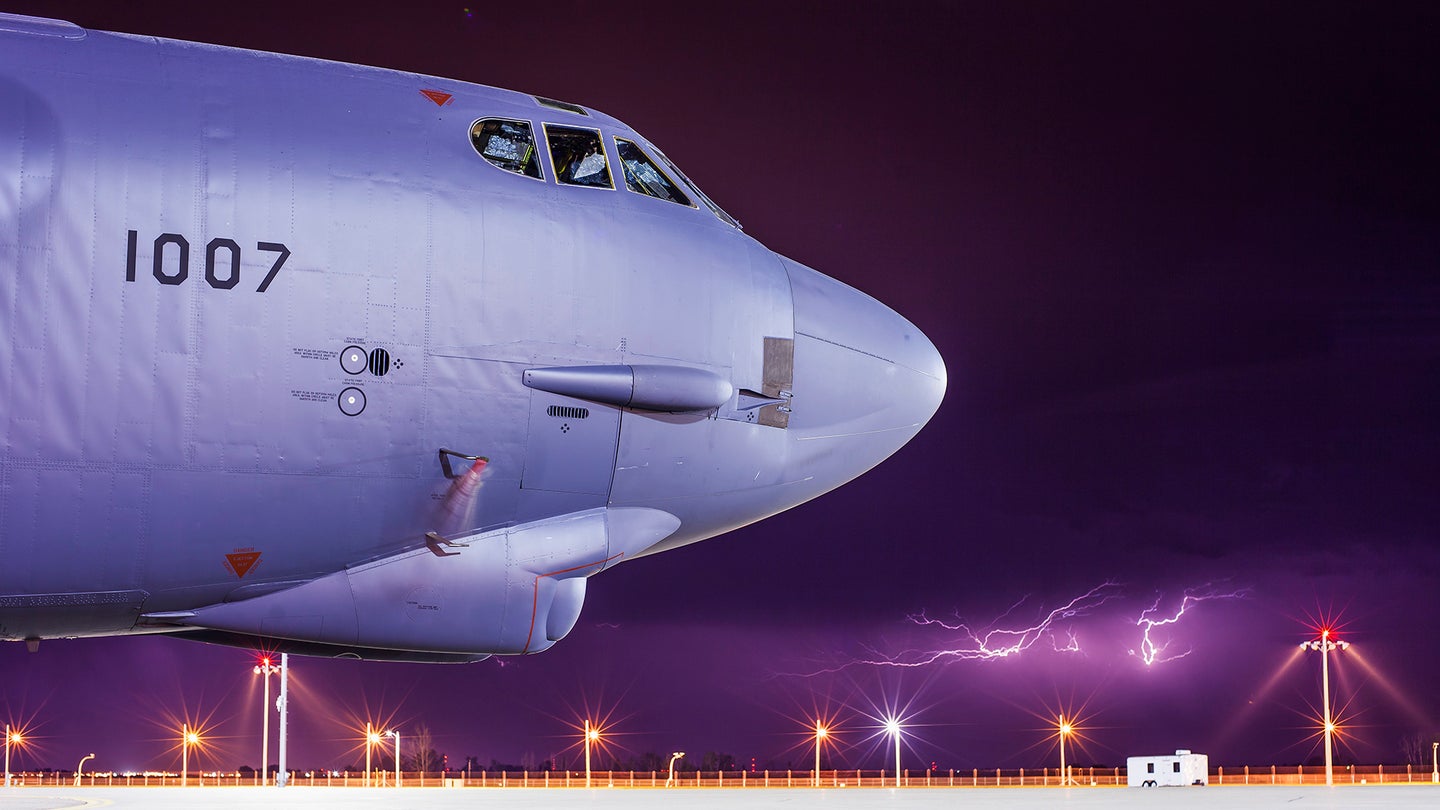 Northrop Grumman's AN/APG-83 Scalable Agile Beam Radar (SABR) that is already slated to be installed in F-16s from five countries, including the U.S., is now in the running to give the USAF's venerable B-52H Stratofortress fleet a massive upgrade in sensor capability. The current radar installed under the B-52's radome, the AN/APQ-166 mechanically scanned array radar, is relatively ancient, with its last major update occurring over 30 years ago. Fast forward to today and the B-52 is slated to serve into the second half of the century. In order to do so, it is getting a slew of enhancements. These include new smart weapons racks, heavy-weight weapons pylons, new engines, and upgraded communications systems and avionics. A new radar is also a central part of this upgrade pathway. This is where SABR comes in.

In a press release dated February 26th, 2019, Northrop Grumman laid out its case for furnishing a new radar to the B-52 fleet:

Northrop Grumman’s SABR is under consideration by Boeing for the B-52 Bomber Modernization Radar System, which includes engineering, manufacturing, development and delivery of an initial seven radar units. The USAF has expressed a desire to upgrade the entire B-52 fleet with a new radar system. Additionally, a version of SABR has been developed for the B-1B fleet.

The version of SABR being eyed for the B-52 is truly off-the-shelf. It is the same radar system that is being installed in F-16s. A more capable version of SABR with a scaled-up array—nearly three times the size of a fighter-sized SABR—is also available and has been installed on a B-1B. It is known as the aforementioned SABR-Global Strike. But Boeing, who is running the upgrade program, not the USAF, seems more interested in the most cost-effective plug-and-play solution that will require minimal customization, which is the baseline SABR with the fighter-sized antenna.

The addition of a modern AESA radar to the B-52's sensor suite would be a game changer. A radar like SABR offers a dramatic boost in range, fidelity, and flexibility and it would enhance the B-52's targeting, surveillance, and situational awareness capabilities. The ability to make detailed synthetic aperture radar (SAR) maps of the surface of the earth and to provide advanced ground moving target indicator (GMTI) capabilities alone would result in synergistic effects not only for the B-52 itself, but also for other platforms and weapons that can exploit that data in near real-time via data-link

With a radar like SABR, the B-52 could far better identify and engage ground targets in all weather and at standoff ranges. It would also allow the B-52 to be a better anti-ship weapon than it already is, being able to spot vessels and classify them from long distances so that it can employ advanced anti-ship missiles against them. You can read more about this type of scenario here.

In addition to the core functions of a bomber radar, an AESA upgrade could give the B-52H advanced electronic attack capabilities—a latent capability of advanced AESA radars—and the ability to send large amounts of data to other platforms over long distances—another lesser known potential capability of AESA radars. And yes, SABR could give the BUFF an organic and very potent air-to-air capability.

Providing the B-52 with the ability to defend itself from aerial threats would give it better survivability in anti-access/area-denial environments. This doesn't necessarily mean operating in 'enemy territory,' but in vast expanses that could be considered contested—where air superiority is not guaranteed. So even though the threat may be limited, giving the B-52 the ability to swat down enemy fighters if they pop up would allow the big bombers to roam more freely without taxing what are certain to be overstretched fighter assets and the tankers that go along with them during a conflict.

Closer to the front lines, B-52s could be used to haul outsized, very long-range air-to-air missiles that stealthy fighters can't carry, and certainly not in significant numbers. These weapons would be networked to take advantage of stealthy targeting assets, like fighters and UCAVs, operating deep within enemy territory. But with its own capable radar onboard, the B-52 would be able to target hostile aircraft and cruise missiles that break through and head toward friendly forces.

It's also worth mentioning that these various activities can be performed simultaneously by an advanced AESA radar. This means that some of the B-52's six-man crew can use the radar for different functions at the same time. In other words, one crewman can be sweeping the skies for airborne threats while another maps a target area far ahead of the bomber. This seamless multi-mode operation simply isn't possible with mechanically scanned array radar systems and is especially beneficial for bomber crews with diverse roles.

So, with all this in mind, giving the B-52 new and far sharper 'eyes' will really unlock an exciting new concept of operations for the 60 year old jet, not just provide an upgrade to what it already has. When combined with all the other enhancements it is getting as part of a deep remodeling program of sorts, the Stratofortress will become remarkably ready to take on the threats it will face in the decades to come and will serve as the perfect companion to the soon to be flying B-21 Raider stealth bomber.

It's also worth pondering the opportunity that exists when it comes to plugging these radars into other aircraft, including non-traditional assets that have an aperture large enough to accommodate them. Basic private jets and airliners-types could be relatively easily converted to radar-toting information, surveillance, and reconnaissance aircraft. Even USAF tankers, like the new KC-46, could potentially be fitted with a modular AESA that would provide enhanced awareness, ISR, and other functionality for use during or when their tanking functions are not needed. The same could be said for C-130s. It's really something to think about as the USAF pushes to migrate some of its high-end ISR capabilities away from a small number of purpose-built and expensive assets, and instead relying on a larger constellation of diverse and highly networked platforms.

In the meantime, Northrop Grumman's SABR team seems ready for a duel to the death to see that their radars end up on any and all the platforms the Pentagon wants to install an AESA on, and considering Raytheon will be also looking to do the same, it won't be a cakewalk for either of them.