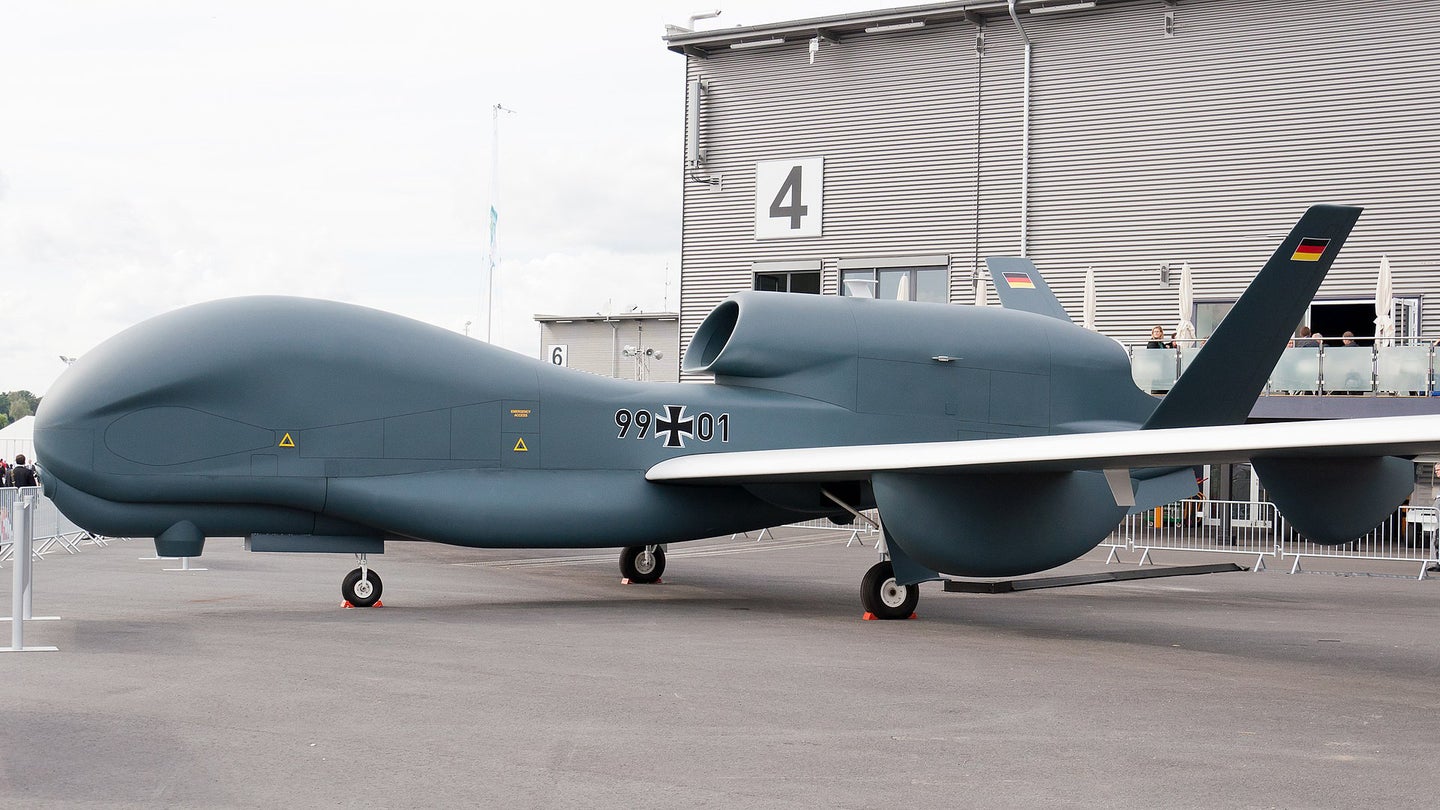 Canada has become something of a collector of second-hand military aircraft as of late after purchasing 25 surplus F/A-18A/B Hornets from Australia to augment their own tired Hornet fleet of a similar vintage. Now they are officially trying to get their hands on Germany's single defunct and totally inoperable RQ-4E Euro Hawk, a variant of the RQ-4 Global Hawk high-altitude, long-endurance (HALE) drone.

German officials had characterized the aircraft as worth very little due to its present state, one in which major components have been stripped from its airframe, stating that it is worth not much more than "scrap value." You can read a complete background on Germany's failed RQ-4E program, what state the defunct airframe exists in, and Canada's odd interest in it in this past article of ours.

Today's news that Canada is actually moving forward with an attempt to acquire the mothballed airframe was first reported on by Reuters. The report states that Canada, which doesn't operate any Global Hawk variants at all, has indeed placed a bid on what's left of the aircraft, according to an official statement from the German Ministry of Defense. The dollar figure of the potential sale remains unknown.

Canada is thought to be interested in the aircraft to monitor its vast and remote territorial holdings and the expanses of water surrounding the country, including in the increasingly contested Arctic. Missions would include monitoring shipping and fishing and the migration of icebergs, among many others.

The Canadian government had hoped to have a fleet of drones flying these missions by now, but the program to acquire them is now being pushed into the coming decade, with an operational capability occurring sometime in the first half of the 2020s, at the soonest.

Reuters notes that NATO may also end up bidding on the aircraft. The North Atlantic military alliance has ordered its own fleet of five Global Hawks, under what is known as the Alliance Ground Surveillance (AGS) program. AGS is shared capability between 15 of the 29 NATO members and is expected to be operational and available to them by the end of this year.

But the configurations of these aircraft and Germany's RQ-4E are not the same, as Germany's aircraft is designed primarily to collect signals intelligence. NATO's aircraft, known as RQ-4Ds, have a high degree of commonality with the U.S. Air Force’s Block 40 RQ-4Bs, which are primarily focused on ground surveillance.

With this in mind, it is most likely that Germany's aircraft would be used for spare parts by NATO. Germany also acquired a number of ground control stations as part of the RQ-4E program, which could be compatible with NATO’s RQ-4Ds. If so, the alliance would look to buy them along with what’s left of the Euro Hawk airframe as part of a package deal.

A sale of the RQ-4E airframe and any remaining associated equipment to either party would allow Germany to finally wash its hands of the Euro Hawk debacle for good. Nearly two decades ago, the German government had planned on buying five RQ-4Es, but European aviation authorities repeatedly refused to certify the aircraft to fly over the continent due to concerns about the risks the unmanned aircraft could pose to civilian air traffic.

Combined with big cost overruns and long delays, Berlin decided to nix the program in 2013 after spending a whopping $793.5 million and getting just one prototype to show for it. Now Germany just wants to unload the craft in order to get any money back from the boondoggle. A new Global Hawk with the necessary ground support equipment costs roughly $120M new.

It's unclear how much utility Canada thinks it can get out of the hulk of a single one-off Global Hawk derivative or just how much money it will take to return the aircraft to an operational state and refit it with sensors applicable to the surface surveillance mission set. It’s not even clear how valuable it would be to NATO for spare parts at this point, either.

With all this in mind, the Trudeau government might be bargain hunting for another second-hand aircraft, but in the case of the Euro Hawk, they could end up just adding a new and equally sad chapter to its already depressing history.