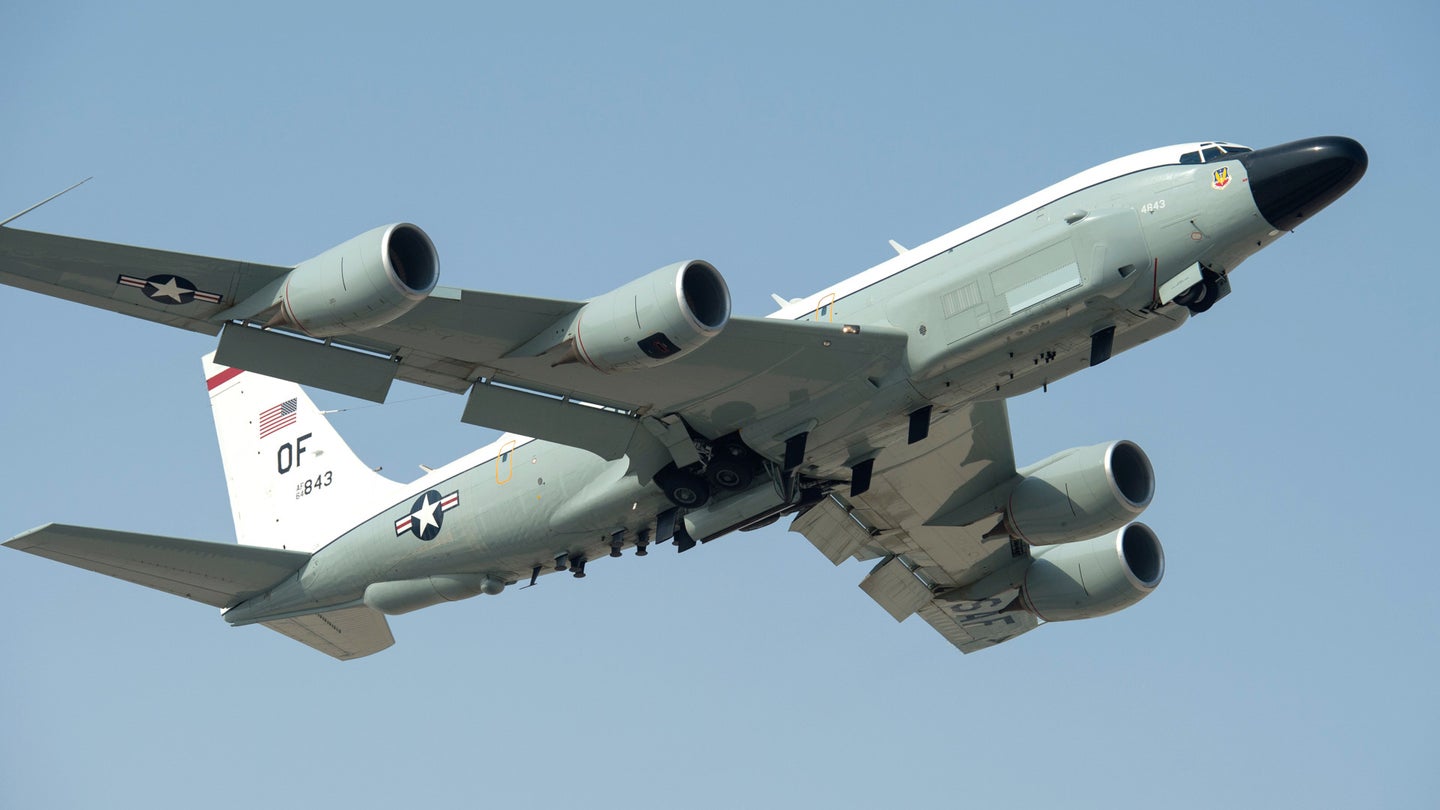 For weeks now, Venezuela has been in the grips of a political battle between President Nicolás Maduro and opposition leader Juan Guaido, who the United States and dozens of other countries have recognized as the country’s legitimate head of state. The plane spotting community is now among those intently watching the situation for signs of curious air traffic, or a potential U.S. military intervention. So, it certainly turned heads when a U.S. Air Force RC-135V Rivet Joint spy plane made an unusually public appearance recently in the Caribbean Sea. But Rivet Joint missions in the region are more common than many people might know and this sortie may not necessarily have been related to the crisis in Venezuela at all.

Expert military aviation tracker and friend of The War Zone @aircraftspots was first to notice the RC-135V, serial number 63-9792, using the callsign Gismo 84, in the Caribbean on Feb. 14, 2019. The airliner-sized intelligence gathering platform subsequently linked up with a KC-10A Extender tanker, Spur 57. This isn’t uncommon for Rivet Joint flights, which can be many hours long as the planes fly long tracks close to target areas gathering valuable intelligence.

Rivet Joints, which include the RC-135Vs, as well as the functionally equivalent RC-135Ws, are among the most capable aerial intelligence gathering platforms the Air Force has at present. The aircraft fly with crews of more than 26 individuals and can perform a variety of task simultaneously.

The aircraft have powerful signals intelligence suites that allow them to detect and listen in on enemy communications, as well as geolocate those transmitters. Among the Crypto Linguists onboard, there will be individuals who are fluent in various languages relevant to the mission at hand so that they can begin analyzing the content of what the plane’s sensors pick up immediately. Other personnel man stations to categorize the emitters and keep an eye out for anything new or unusual.

Lastly, electronic warfare officers can use the same signals intelligence systems to geolocate and categorize radars and other systems associated with integrated air defenses, allowing the Rivet Joints to help build a so-called “Electronic Order of Battle” of enemy or potentially hostile forces in a given area. In the lead up to the U.S.-led missile strikes in Syria in April 2018, Rivet Joints flew regularly off the coast of that country to grab the latest information about the Syrian military’s air defense posture. The information gathered is essential to allied combat mission planning, greatly enhancing the survivability of manned tactical aircraft, cruise missiles, and drones.

A robust array of data links and communications systems allow the RC-135s to send information back to base, to regional command centers, or forces on the ground, in near real time. Altogether, the Rivet Joints have an impressive mix of highly-proven strategic and tactical surveillance capabilities.

So, it is possible that Gismo 84 might have been heading to a station off the Venezuelan coast to monitor the Maduro regime’s recent deployment of various air defense assets. There have been various sightings of Russian-made S-125 medium-range surface-to-air missile systems, among other anti-aircraft artillery, moving toward the country’s shared border with Colombia, a major U.S. ally that has routinely criticized Maduro. Venezuelan forces also recently conducted what appeared to be an exercise with their long-range S-300VM surface-to-air missile systems, which the country also acquired from Russia.

Venezuela’s very public displays of its air defense capabilities can only be seen as a signal to the United States, in particular, that the country’s military remains loyal to Maduro and is prepared to respond to any American intervention. It’s also part of a broader propaganda push to present the embattled leader as firmly in power.

The RC-135 could have been in the area keeping its electronic ears open for relevant communications chatter, too. The Rivet Joint passed near Cuba, which is one of Maduro’s few supporters in the region. While Cuban authorities are almost certainly advising the Venezuelan leader, some members of the U.S. government have accused Cuban authorities of more actively directing his actions and policies, but so far there is no hard evidence that this is the case. Regardless, the United States would have to be very interested in know what the two countries might be coordinating.

While it was unusual for the Rivet Joint to pop up on public accessible flight tracking software, at least historically, it’s certainly not unusual for the aircraft to be flying in the region. When it comes to Cuba, for instance, Rivet Joints have long flown routes from bases in the United States to gather strategic intelligence about that island, run by a regime that is a long-time American adversary, irrespective of any ties it has to Venezuela. These sorties were, at least for a time, were given the nickname Bitter Wind.

RC-135s, flying from sites in the United States and forward bases in Latin America and the Caribbean, including the Dutch island of Curaçao, also routinely take part in counter-narcotics operations in Central and South America. Beyond Bitter Wind, we know that intelligence gathering sorties as part of missions nicknamed Beach Wind, Seminole Wind, and Shula Wind have all taken place in or around Central or South America thanks to documents the author previously obtained via the Freedom of Information Act.

RQ-4 Global Hawk flights nicknamed Beach Axe have occurred in areas under the purview of both U.S. Southern Command and U.S. Northern Command. The former oversees operations in Central and South American, as well as the Caribbean, while the latter is responsible for the area around the United States itself, as well as Canada and Mexico.

The Air Force has also nicknamed U-2 Dragon Lady sorties over Colombia, specifically, as Seminole Emerald and Seminole Game. With all this in mind, the Beach Wind missions most likely involved Rivet Joints operating in areas adjacent to the Caribbean, at least in part, while Seminole Wind missions may have involved flights directly over Colombia.

Beyond intelligence, surveillance, and reconnaissance aircraft, the U.S. Air Force also regularly deploys a wide variety of combat aircraft, even including B-1 and B-52 bombers, to the Caribbean to support counter-drug operations. These missions, which you can read about in more detail here, are billed as training exercises that give aircrews a unique opportunity to search for and track real-world targets in a maritime environment.

Also, on Feb. 14, 2019, @CivMilAir, another active online plane tracker and friend to The War Zone spotted a B-52 making a somewhat unusual flight over Florida. Gismo 84 and this bomber might have been part of a larger surge of assets to support a particular counter-narcotics operation.

In August 2016, the Air Force took part in a similar effort, known as Operation Big Week. This involved the deployment of B-1s, B-52s, E-8C Joint Surveillance and Target Attack Radar System (JSTARS) battlefield management command and control aircraft, among other assets, in the Caribbean.

None of this is to say that increased attention from plane spotters on the region due to the crisis in Venezuela hasn’t uncovered curious and suspicious aerial activity. But it has also shone a light on the extensive and routine, if largely unpublicized activities of U.S. government aircraft, including U.S. military planes, across Latin America, as well.

So, Gismo 84’s trip into the Caribbean could have been tied to the crisis in Venezuela, but it may well have been just business as usual.