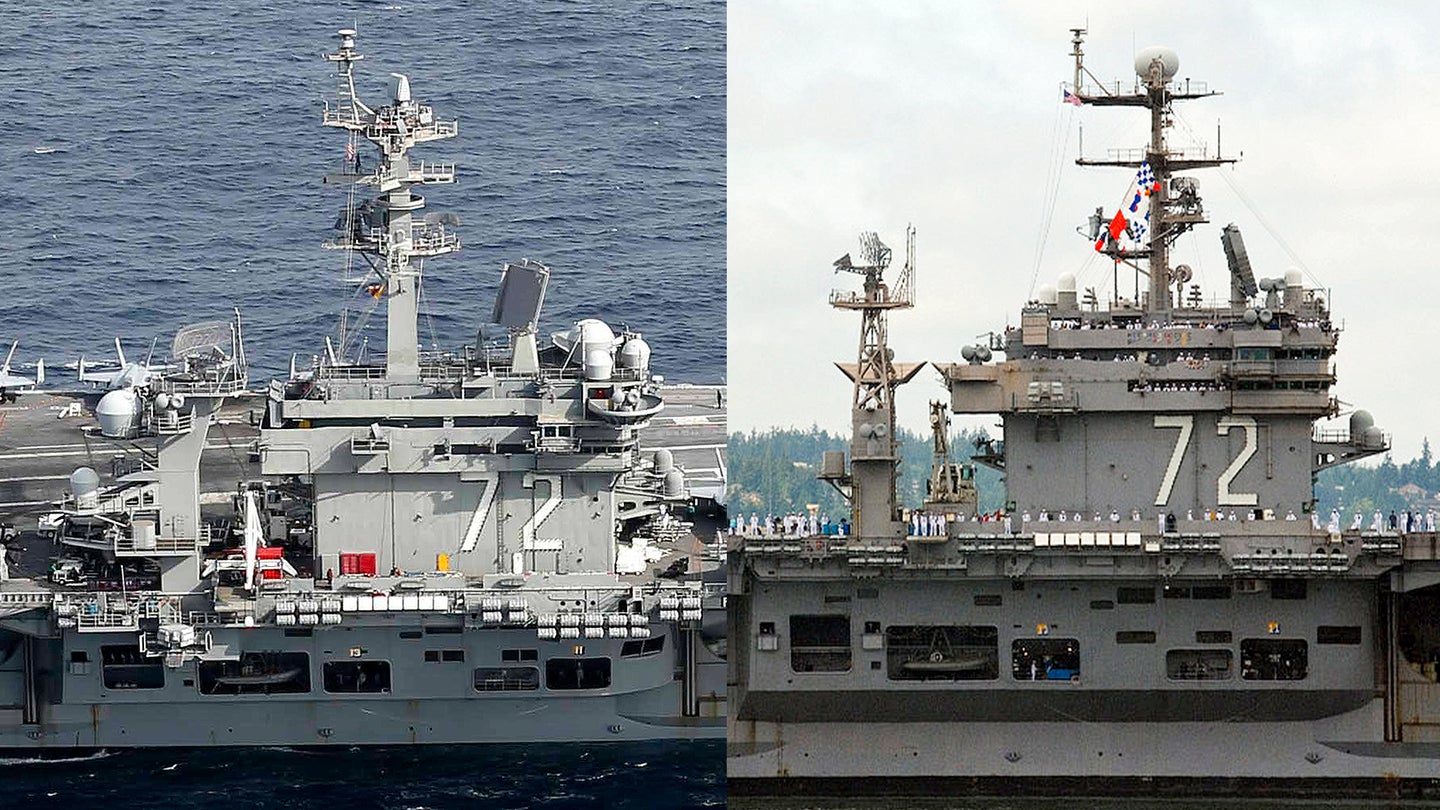 ​​​​USS Abraham Lincoln, one of America's Nimitz class supercarriers commissioned in 1989, recently completed a multi-year mid-life Refueling and Complex Overhaul that began in 2013. In May of 2017, she was redelivered to the fleet and is slated to make its first operational deployment since its refitting. During her downtime, the nuclear-powered carrier received many upgrades, some of which are very visible when viewing the ship externally.

Chris Cavas (@cavasships) noted that there were changes to Lincoln's island superstructure on Twitter, which prompted us to take a closer look.

Below is a comparison shot of the USS Abraham Lincoln's island from before the overhaul (right) and after (left). The changes are quite dramatic. An entirely new mast has been fitted as well as a new radar tower design located just behind the island superstructure.

Also, what's clear is how the carrier's satellite communications suite has been totally reconfigured and expanded. Satcom domes cover not just the island but also the radar tower.

One of the ship's AN/SLQ-32 SEWIP electronic warfare systems has been relocated from the upper section on the island, down to just below the deck-line.

Finally, what's also immediately clear is that the number of radar target illuminators used to guide RIM-7 Sea Sparrow and RIM-162 Evolved Sea Sparrow Missiles (ESSMs) have been reduced by two and the remaining two have been repositioned. The three previously mounted atop the island have been reduced to just one, which is now positioned at the forward right corner on the island. The one that was on the radar tower still remains, but it has been moved up a bit on the new tower.

The reduction in illuminators could be because of the fact that the new Block II variant of the ESSM is active homing capable and networked. As a result, it doesn't have to rely on illuminators to home in on its target. You can read all about this system in this past article of ours.

Once again, these are just the obvious changes to the area around the ship's island, but it serves as a good example of just how extensive these complex overhauls are.

CVN-72 is now ready to get back in the fight after the better part of a decade spent getting overhauled and training. After this complex refit, she is set to serve for the back half of her 50 year, and potentially even longer, lifespan. As the ability for the Navy's newest carrier, the USS Gerald R. Ford (CVN-78), to meet her introduction into operational service is increasingly in doubt, the Lincoln's ability to return to hot spots around the globe will be greatly appreciated.