The specialized squadron might offer a home for the Navy's small fleet of advanced Zumwalt-class stealth destroyers and other ships. 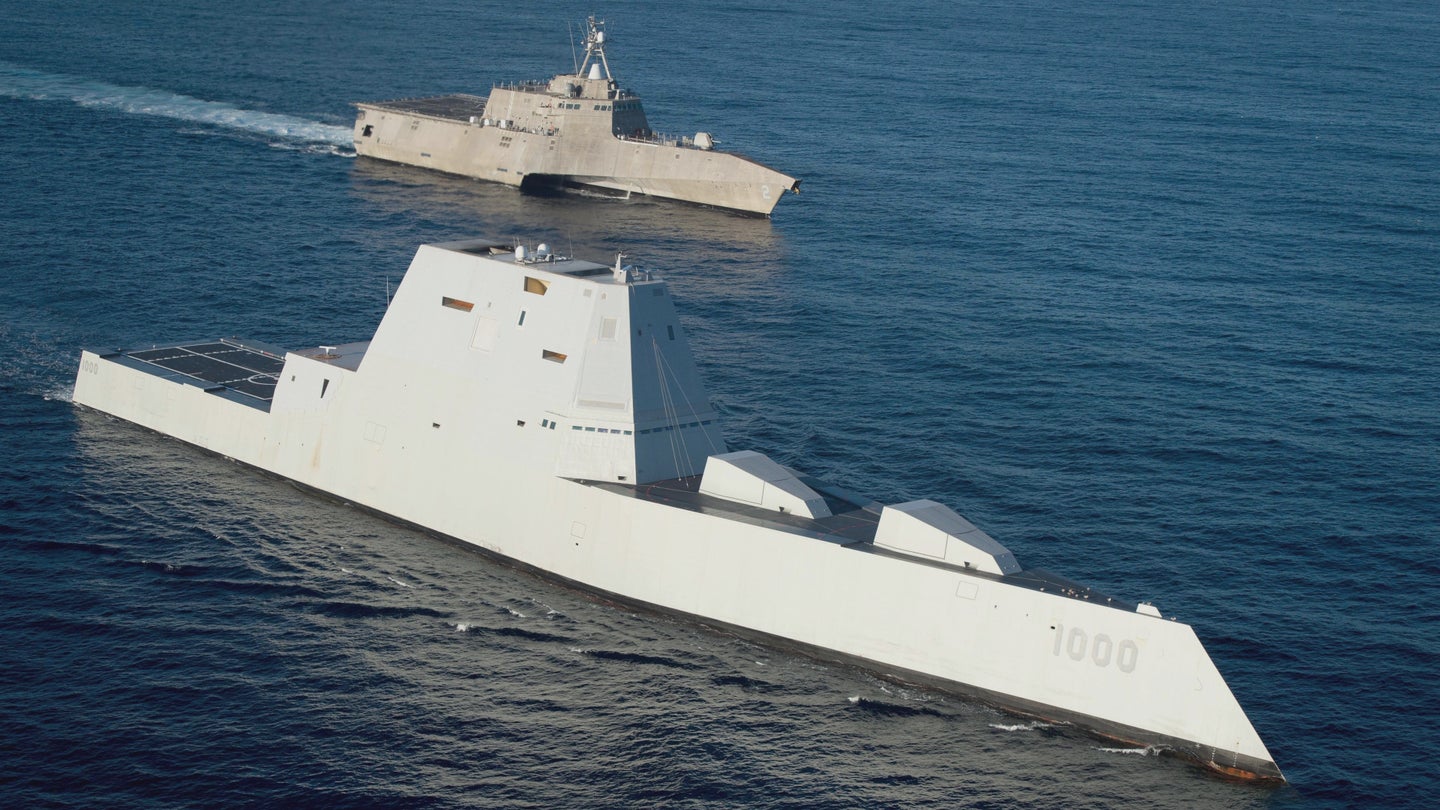 The U.S. Navy is looking to stand up a new surface development squadron as early as this year that would help determine the most practical use of the service’s watered-down Zumwalt-class destroyers, something we at The War Zone have been suggesting could happen for years now. This new unit would also support “aggressive experimentation” with regards to the roles and missions of other surface ships and other craft, including the chronically underperforming Littoral Combat Ships, the Arleigh Burke-class destroyers, and Sea Hunter unmanned surface vessels. Depending on its final structure, this unit might become a permanent home for some of these vessels and would support the development of new types in the future, such as the Navy’s future guided missile frigate.

U.S. Navy Vice Admiral Rich Brown, who is presently both Commander, Naval Surface Forces and head of the Naval Surface Force, U.S. Pacific Fleet, offered new details about the experimental squadron at the Surface Navy Association’s main annual conference on Jan. 15, 2019. The service has been considering creating this unit since at least 2017 and would help fill the gap left by the shuttering of the Surface Warfare Development Group in 2012.

At present, the Navy relies primarily on the Naval Surface and Mine Warfighting Development Center (SMWDC) in San Diego for the development of new tactics, techniques, and procedures and experimenting with different operational concepts for the service’s surface warfare fleets. This organization also sends Warfare Tactics Instructors (WTI) to help support operational commands and to conduct experiments and assessments with the ships assigned to those units.

An official Navy news story from December 2018 offers a good description of how the Center performs its mission at present:

“Naval Surface and Mine Warfighting Development Center’s (SMWDC) WTI program trains high-performing junior officers in advanced tactics and Surface Warfare expertise before they are placed in production tours where they plan and support advanced tactical training exercises, develop doctrine and tactics, techniques, and procedures (TTP), and provide operational support. After these tours they return to the fleet to increase the lethality and tactical proficiency of the Surface Fleet by infusing their knowledge and experience within the watch teams they support and lead.”

But this is a process that is, by definition, dependent on the availability and deployment schedule of operational ships. While the Navy says the exact structure and mission of the proposed Surface Development Squadron, or SURFRON, is still getting ironed out, Vice Admiral Brown has described it as being more akin to existing naval air development squadrons and Submarine Development Squadron Five (DEVRON 5). These units have their own organic aircraft and submarines to work with, respectively.

“Where do you experiment? How do you integrate [new manned and unmanned ships] into strike group operations?” Brown asked rhetorically. “What better place to have the Surface Development Squadron than to do that.”

This new surface unit could prove to be especially useful for finding a way to leverage the unique capabilities of the Zumwalts. After a protracted saga that you can read about in more depth here, the Navy eventually decided to purchase just three of these advanced stealth destroyers and has been struggling to find suitable missions for these low-density assets ever since. On Jan. 27, 2019, the service commissioned the second of these ships, the USS Michael Mansoor. The Navy's goal is to commission the last ship, the future USS Lyndon B. Johnson, by the end of this year.

Most recently, the Navy has said it is looking to transform the Zumwalts into an “arsenal ship” of sorts outfitted primarily to conduct stand-off attacks against targets at sea and ashore. With just three ships that have seen their stealth capabilities steadily reduced the destroyers may be hard-pressed to provide even limited operational utility in these roles, even when heavily networked together with larger surface warfare task forces and other friendly units.

We at The War Zone have long suggested it might be most practical to assign these ships to a special projects or development squadron, just as it did with the Seawolf-class submarines. The Seawolf saga is similar in many ways to that of the Zumwalts, to begin with, and all of those boats are now part of DEVRON 5.

“I think what you’re going to see with DDG-1000 [Zumwalt] is, it’s going to be akin to the Seawolf program: we only built three of those and the submarine community, to their credit, rather than crying over spilt [sic] milk said, okay, we’re going to go learn from what we did on Seawolf and some of the technologies there, and we’re going to go build a better product going forward, which turned out to be the Virginia-class submarine,” U.S. Navy Vice Admiral Thomas Moore, head of Naval Sea Systems Command, said back in February 2017, suggesting a development role could be in the destroyer’s future. “The combatant commanders are going to be glad to have it, and then we’re going to learn something about the new technologies we have on that and we’re going to roll that into the Future Surface Combatant going forward.”

The future Surface Development Squadron could easily provide a permanent home for the three Zumwalts, as well as other surface ships that are in many ways similarly orphaned. The first four Littoral Combat Ships (LCS) have become non-deployable training ships that might be better used as development platforms, as well.

The LCS program, which consists of the distinct Freedom- and Independence-classes, has been a debacle and the Navy is crafting a final concept of operations for the still growing number of these ostensibly operational ships more than a decade after commissioning the first one. The service did not deploy a single one of these vessels on an operational cruise in 2018 for a variety of reasons.

The Surface Development Squadron will very likely be a composite entity and could utilize ships detached for extended periods of time from their parent units. In 2017, Navy officials suggested the new unit could include a mix of Zumwalts, LCS, and Arleigh Burke-class destroyers.

The latter ships are the service’s most numerous major surface combatants and are expected to see substantial upgrades in the coming years, even as more active development of the future Large Surface Combatant gets underway. It will be important to evaluate and experiment with the new capabilities, including hypervelocity ammunition, directed energy weapons, improved electronic warfare and intelligence gathering systems, have to offer.

The Navy also expects the new development squadron to aid in helping to integrate unmanned vessels into its surface warfare operations. In 2018, the Office of Naval Research took ownership of an unmanned platform called the Anti-Submarine Warfare Continuous Trail Unmanned Vessel (ACTUV), or Sea Hunter, from the Defense Advanced Research Projects Agency (DARPA).

The Navy is now in the process of getting a second one of these trimaran craft, called the Sea Hunter II, as part of its Medium Displacement Unmanned Surface Vessel (MDUSV) program. The service primarily sees Sea Hunter as a potential anti-submarine warfare platform, but it could also conduct a host of other missions in the future, which you can read about in more depth here.

Placing these unmanned craft under the control of the Surface Development Squadron could help the Navy more actively explore their capabilities. The service had given DEVON 5 a similar task with regards to large unmanned undersea vehicles, until that program evolved to the point where it necessitated its own unit, Unmanned Undersea Vehicle Squadron One (UUVRON 1). In October 2018, the Navy also stood up its first dedicated unmanned aircraft development unit, Air Test and Evaluation Squadron Two Four (UX 24).

None of this is to say that the new Surface Development Squadron and its ships, possibly including the Zumwalts, may not have a limited operational mission or be available for specialized duties, as necessary, either. DEVRON 5 uses its three Seawolfs and other assets to conduct highly sensitive and secretive intelligence gathering and other missions, the vast majority of which remains classified, as did Submarine Development Squadron One Two (DEVRON 12), until it became a regular submarine squadron in 2016.

Having a dedicated surface development and test squadron will also help in crafting requirements for future warships. The Navy is already getting deeper into firming up what it wants from its future guided missile frigate, or FFG(X). Five companies are crafting design proposals for that ship, the first of which could get commissioned as early as 2025.

The Navy already wants these ships to have a significant mix of surface warfare, anti-submarine warfare, and air defense capabilities from the start, but it is already interested in ensuring that these ships have sufficient space and power resources to add in other capabilities in the future. These additions could include a smaller derivative of the latest AN/SLQ-32 electronic warfare system the service is in the process of installing on its Arleigh Burkes, a 150 kilowatt solid-state laser directed energy weapon system, and full network connectivity under the Cooperative Engagement Capability (CEC) concept. This latter feature will allow these ships to readily exchange information with other friendly forces at sea, in the air, and on land, and potentially control, or at least coordinate with, various unmanned surface vessels.

Further down the line, the Navy is also beginning to flesh out its requirements for a future Large Surface Combatant that might replace some number of Arleigh Burkes, as well as the Ticonderoga-class cruisers. The work of a new developmental squadron would certainly help inform what the service actually needs out of its next major surface warship.

In addition, this increased focus on traditional naval surface warfare is almost certainly driven in part by the U.S. military's over-arching effort to re-prioritize preparedness for more conventional conflicts against potential "great power competitors," such as Russia or China. As such, the Navy may also be interested in crafting an "aggressor" surface warfare element that could focus on mimicking the tactics, techniques, and procedures of possible opponents to help better evaluate the operating concepts that come out of units such as the Surface Development Squadron. The service is already looking to establish a similar aggressor unit for submariners to train against.

At the same time, it may be hard for the Navy to dedicate any significant amount of ships or resources on a permanent and semi-permanent basis to this new developmental squadron. The service has had increasing trouble meeting the goal of having 355 active ships, as well as finding the sailors to crew them.

Dedicating ships and crews to experimental duties may simply not be a realistic option, even if the developmental squadron has a secondary operational role. It is possible that Navy might be able to supplement any ships it does assign to the squadron with contractor-operated vessels serving as surrogates, something it has already done in other instances on a more ad hoc basis. For instance, earlier in January 2019, the service used a contracted ship to carry an LCS mission package to complete certain testing requirements.

“We need this squadron to develop solutions to tough operational problems, accelerate new warfighting capabilities, and rapidly assist in the development and validation of tactics, techniques, and procedures,” Vice Admiral Brown declared at the Surface Navy Association conference. “It will be a place to take calculated risks and see what works and what doesn’t work.”

With the Navy still working to determine the roles and missions of some of its newest ships and beginning to outline the requirements for its next generation of warships, now does seem like a prime time to create a dedicated experimental unit to further explore new and emerging demands for the service’s surface warfare fleets if it can balance these demands against its operational needs.