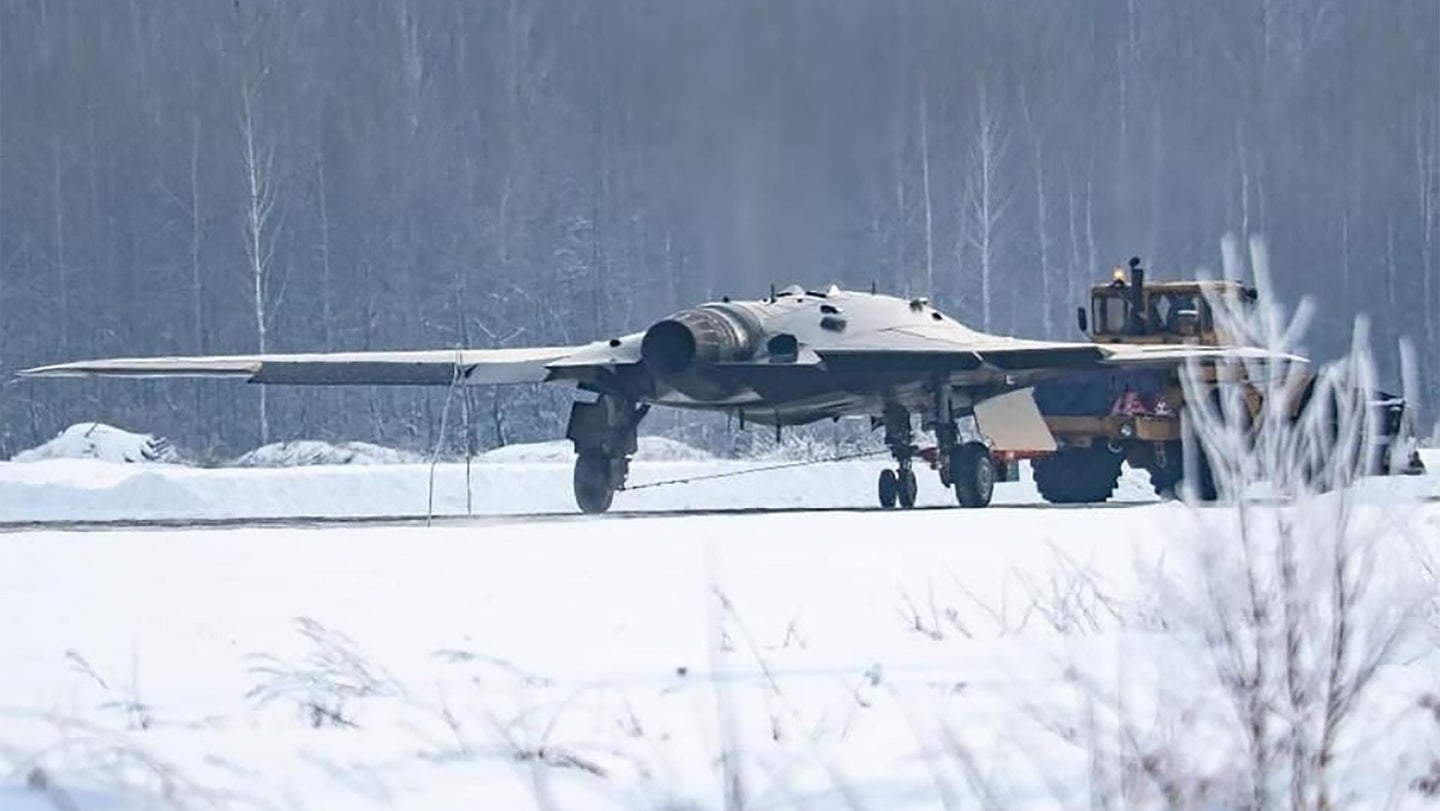 Yesterday, we reported on what appeared to be the first image of Russia's much-touted, but never yet to be seen Okhotnik, or Hunter, unmanned combat air vehicle (UCAV) that had been in development for years and was supposed to start flight testing soon. Now, just a day later, new images have surfaced that offer up a much better look at the aircraft, as well as new insights into the drone's potential capabilities and design limitations.

Make sure to read our past piece of Hunter to get up to speed, but suffice it to say that these images show an impressively large UCAV. As you can see, it dwarfs the relatively large snow plow tractor that is pulling it, leaving the impression that it is similar overall in size to a medium weight fighter, although shorter in length and significantly longer in wingspan. Its dimensions appear to be loosely analogous to Northrop Grumman's X-47B, if not larger in terms of wingspan as it doesn't appear to feature the X-47B's 'cranked kite' planform. The X-47B was roughly 38 feet long with a 62 foot wingspan.

Far more valuable than the forward hemisphere photos is this one from the rear. The aircraft is powered by a full-sized fighter jet engine that could potentially include afterburning capability based on the nozzle installation. This would be helpful for taking off at high gross weights, but beyond that, it would have questionable utility. The engine being used is unknown, but the Saturn AL-31F series used by the Flanker family of aircraft would be a logical choice. It is possible that a derivative of the more powerful AL-41F that is still somewhat in development could be used in the future, which may eliminate the need for an afterburner.

The engine type is not as important as the configuration of the rear of the aircraft. What we see here is downright crude by western low-observable UCAV standards. The engine exhaust section appears to be sunk into a trough that features classical 'radar trap' angles. Composite structures could help with reducing such a design's radar signature from the rear aspect, but still, the design would be far from ideal.

The nozzle itself is about as bad as it gets when it comes to reducing the infrared and radar signatures of the aircraft. Even if a lower-observable serrated round nozzle were added, such as one similar in concept to what is found on the F-35, this would still be a major issue when it comes to providing broadband low-observability, instead of being mainly able to elude and/or reduce the effectiveness of enemy fire control radars.

When it comes to thermal signature, there really is no difference between this aircraft and a 4th generation fighter, especially in terms of line-of-sight directly at the exhaust from the entire rear hemisphere of the aircraft.

We have to also remember that this is a prototype. Maybe the final version will feature a redesign of this critical area. But we never saw that happen on Russia's 5th generation fighter, the Su-57. As it sits now, some of the biggest potential advantages of a modern UCAV, broadband low observability and highly reduced infrared signature, have been forfeited in this particular configuration.

It's also worth noting that for larger stealthy flying wing aircraft, designing an exhaust to successfully reduce radar and infrared signature while also retaining efficiency and keeping the aircraft in control throughout its flight and thrust envelope is very challenging. The B-2 went through years of teething to get its planar exhausts to work without major material issues and the design is still considered sensitive technology.

The X-47B never flew with its production representative exhaust. Instead, it used a less stealthy exhaust shroud during its testing career, which could have been refined on production aircraft. Still, this is nothing in comparison to the deficiencies seen on Sukhoi's exhaust design.

Smaller stealthy flying wings that use lower thrust engines seem to have less of an issue in this department. Still, there is no attempt seen in Hunter's current design that even points to a low observable change down the road.

Forward hemisphere low observability is by far the most important for traditional low-observable tactical jets. The idea is that you can kill the target before it gets a chance to look at your rear, or you can exit a vulnerable area fast enough to ensure survivability. Careful route planning supported by high-quality electronic intelligence, as well as electronic warfare support, can go a long way in overcoming this issue as well. But this really isn't the case for a UCAV. The ability of these aircraft to persist for long periods of time over enemy territory while operating in kinetic and surveillance and support roles is one of their greatest selling points. The Hunter's rear configuration will severely limit its ability in this regard.

The air inlet's position in relation to the engine's fan face is also worth questioning when it comes to low observability. In the pictures, they appear as if they are fairly in line with one another, which would not be good for maintaining a stealthy signature from threat radars peering from the critical head-on aspect. We will have to wait and see if there is a serpentine duct or some sort of baffle and screen setup to help mitigate this issue. But a baffle is still not the same as serpentine duct when it comes to low-observable treatments. Considering what the rear looks like, it's possible Sukhoi just went with a baffle system. Once again, this would be similar to what happened with the Su-57's design.

As we mentioned in our previous piece, the aerials and lumps on the aircraft will likely disappear after testing. But what's worth mentioning is the odd configuration of the trailing edge flight controls and flaps considering it is being pulled by a tug. Also, the APU is running on the aircraft and the engine exhaust appears to be in an under power configuration. It's possible that some sort of glitch or failure required the aircraft to be returned to a servicing area without being shut down, or it is being brought out while running for ground handling tests.

The aircraft's landing gear looks similar to the one used on the Su-57, which would make sense as Hunter and the Su-57 are likely to share multiple systems and are envisioned to work alongside one another.

Finally, I want to address some questions I have been asked after our first piece regarding how Russia was able to make such an aircraft in the first place. Knowing what we now know from these pictures, I don't see how this is far outside Russia's aerospace capabilities. Nearly every major power is involved with some sort of UCAV program at this time. China has a list of them ongoing and these are just the ones we are allowed to know about. So, it's only logical that Russia, still one of the world's most prolific military aircraft manufacturers, wade into this capability area as well.

Flying the aircraft and turning it into a working and effective weapon is another story entirely. Just developing the command and control software and data-link architecture will be a significant and expensive challenge for Russia. But, it is important to remember that Russia was able to examine the RQ-170 Sentinel that fell into Iranian hands. In fact, they likely led the effort to exploit every bit of technology and know-how they could from the Skunk Works-built stealthy flying wing. Do not underestimate how much of an impact this had on their ability to at least know where they needed to invest development dollars to make a similar system of their own a reality one day.

With all that said, it's exciting that we are already getting multiple decent quality views of Sukhoi's long-awaited unmanned creation. For now, we will leave the analysis there, but we will update this post throughout the day with new information as it comes available, as well as key takeaways from it.

The new image appeared as a specially configured Su-57 emerged with markings indicating it will be directly involved in the drone’s test program.