The new image appeared as a specially configured Su-57 emerged with markings indicating it will be directly involved in the drone's test program. 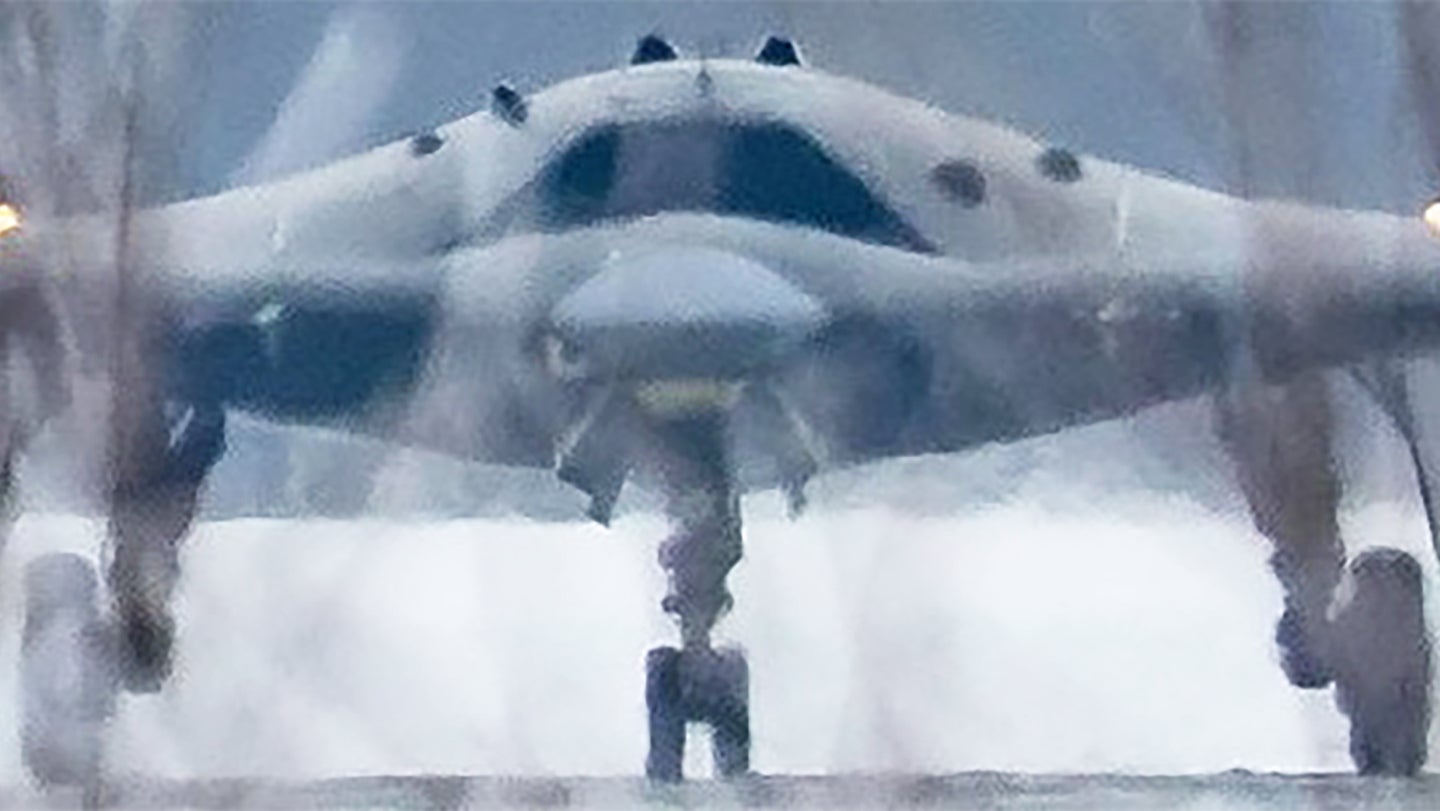 A picture reportedly of Russia's Okhotnik, or Hunter, unmanned combat air vehicle (UCAV), appears to have emerged on social media. Officially dubbed URBK, or Udarno-Razvedyvatelnyi Bespilotnyi Kompleks in Russian, which translates to Strike-Reconnaissance Unmanned Complex, the aircraft has been in development for years in one form or another, with Russian aircraft design house Sukhoi leading-up the project.

The photo that appeared on Russia's top social media site VK shows a flying wing UCAV on a frigid taxiway and looks to have been taken at a distance and between barren trees surrounding the airfield.

There is also a second picture from a slightly different perspective focused on one of the aircraft's main landing gear.

The photos are reminiscent of the ones that came out of China showing it's J-20 stealth fighter for the first time in 2011. It is quite possible that the image was a deliberately "leaked" as the Ministry of Defense has touted the upcoming flight testing for the UCAV since the Summer of 2018.

The craft itself looks fairly impressive and substantial in size with a hardy landing gear that looks similar to those used on modern Russian tactical jet designs. The configuration appears to be loosely similar to something between Northrop Grumman's X-47B and Boeing's X-45C Phantom Ray, as well as other international UCAV designs. The blisters protruding from its fuselage are likely necessary systems for testing and not representative of a final production configuration.

"Next year, the Okhotnik will enter trials. The work on this project is a priority and it is proceeding at a good level. In the spring, we are expecting the first flight of this drone," Russia's Deputy Defense Minister Alexei Krivoruchko told the Ministry of Defense's official television channel TV Zvezda in December 2018. "This is a serious task for us."

In November 2018, An unnamed Russian ministry source had also told state-run news outlet TASS that the Okhotnik prototype had completed its first ground tests, including taxying and a takeoff run, at the Novosibirsk Aircraft Production Association's plant, which support's Sukhoi's research and development programs and actual aircraft production. Though it reportedly reached a speed of more than 120 miles per hour, the UCAV did not actually take off. The anonymous individual also said that the unmanned aircraft had accelerated down the runway and then slowed to a stop in a "fully automated mode."

The general weather conditions in the picture would match with the reports from Novosibirsk in November 2018, suggesting that this picture could be from those ground tests. The current weather there is also frigid and snowy, though, so it could easily have some time between now and then or even before, too.

A previous picture purportedly of the Okhotnik had emerged in 2017 as part of an official Russian Ministry of Defense briefing slide. The much lower quality image did show a flying wing design roughly similar to the unmanned aircraft in the new pictures. The caption to the 2017 image had described the aircraft as "Okhotnik-B," suggesting there may be or have been multiple subvariants or configurations over the course of its development. It's most likely the earlier photo is of a subscale demonstrator.

In addition, in recent days, one of Russia's handful of Su-57s has emerged wearing unique markings showing the shape of a UCAV flying alongside the shape of Su-57 with a lightning bolt between the two. The bolt is universally used to show electronic connectivity and data sharing.

A number of aerials are also new to the Su-57 in question, which would be used for data-linking between it and the Okhotnik. The manned aircraft could potentially forward that information to testers on the ground.

Making the mission of this particular Su-57 even clearer, a shot of the aircraft from the bottom shows its digital paint scheme resembles the shape of a stealthy UCAV. The jet could be acting as a surrogate testbed for certain technologies that will go into the Okhotnik, as well.

Russia's move to developing a UCAV that is capable of manned-unmanned teaming involving UCAVs acting as "loyal wingmen" to Su-57s and eventually other aircraft makes a lot of sense. The U.S. Air Force, in particular, has been actively exploring the concept which you can read about in more detail here.

But for Russia, Okhotnik could help overcome known deficiencies in the Su-57 design, which you can read about in detail here, and create a team that is truly more than the sum of its parts. This is in addition to using the UCAV as an independent asset or networked with other UCAVs for strike, surveillance, and electronic warfare missions.

Separately, the MiG company has also been working on their own stealthy UCAV, known as Skat, or Manta Ray, the present status of which is unclear. There are also unconfirmed reports that this project may have helped inform the development of Okhotnik. Sukhoi and MiG are both under the umbrella of Russia's state-owned United Aircraft Corporation.

Whether or not this new image is of Okhotnik, or some other design, if it is indeed real it is the latest evidence that Russia remains committed to the development of a stealth UCAV. China continues to charge in the same direction, as does India, and countries in Europe are following suit, as well. Meanwhile, the United States continues to act as if this game-changing technology doesn't even exist, at least publically, even though they proved it was incredibly promising a decade and a half ago. You can read all about this history and the odd paradox it that exist because of it in this past special feature of ours.

If Sukhoi intends to keep to its previously reported schedule and have Okhotnik make its first flight later this spring, we might not have to wait too much longer to see how far the Russians have moved toward making their stealthy unmanned combat air vehicle dreams a reality.

UPDATE: New photos have emerged. These images and our complete analysis linked here.