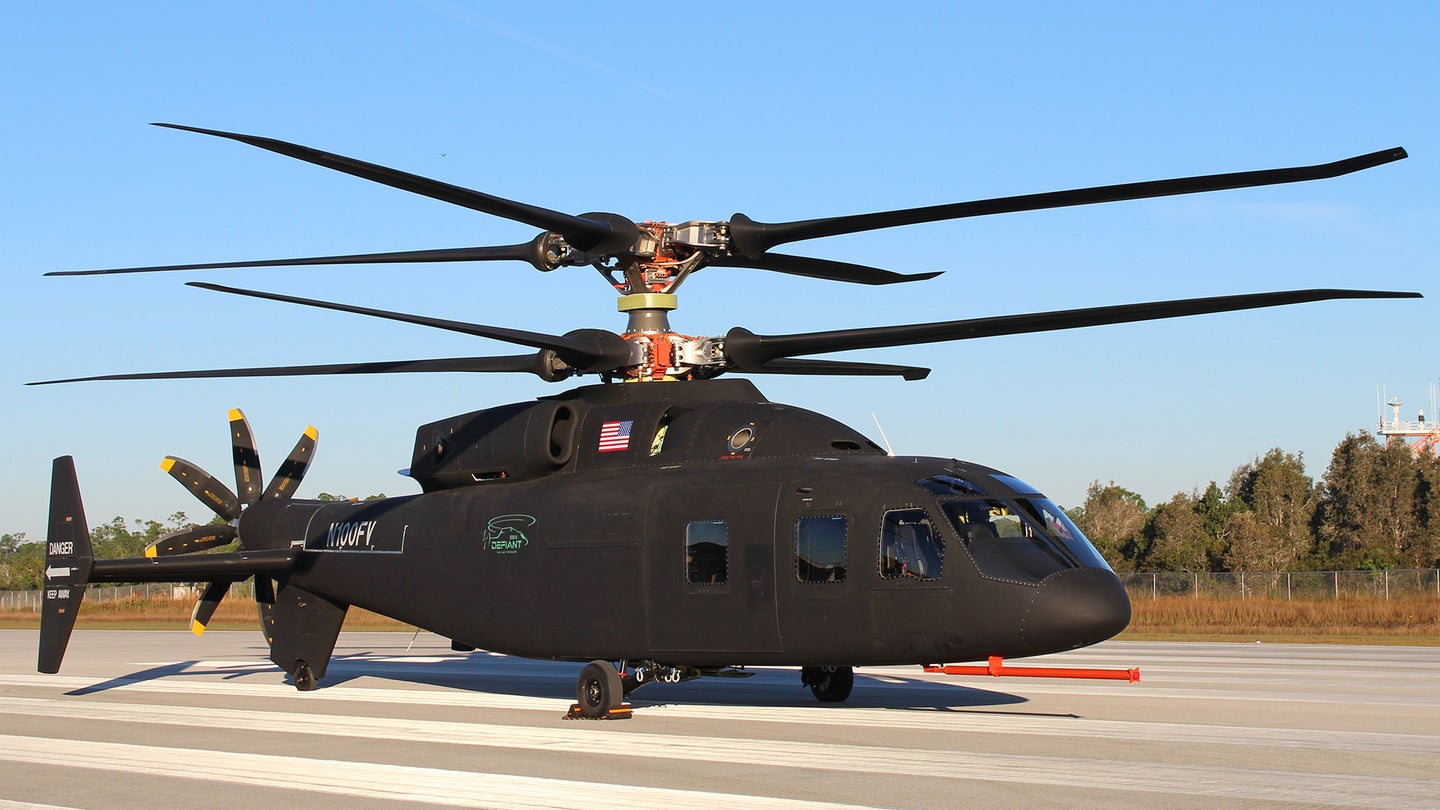 A team consisting of Sikorsky and Boeing has unveiled the prototype of its SB>1 Defiant helicopter. The rotary wing aircraft's public debut is an important development for the two companies, which recently had to push back plans for its first flight yet again.

Lockheed Martin, of which Sikorsky is now a part, released pair of pictures of the Defiant, which presently carries the U.S. civil registration code N100FV, along with a brief official statement on Dec. 26, 2018. The SB>1 is set to go head-to-head with Bell Helicopter's V-280 Valor tilt-rotor, which you can read about in more detail here, as part of the U.S. Army's Joint Multi-Role (JMR) technology demonstration program. This project, in turn, will help inform the requirements for "medium" segment of the larger Future Vertical Lift (FVL) program, which is seeking replacements for its UH-60 Black Hawk transport helicopters and AH-64 Apache gunships.

The Defiant is an advanced compound helicopter, which combines rigid, coaxial rotors with a pusher propeller at the rear. This configuration offers increased speed and greater maneuverability over traditional helicopters, with an expected top speed that is more than 100 miles per hour faster than a Black Hawk. The Sikorsky-Boeing team also says the SB>1 will have improved stability while hovering and be quieter than existing types.

The new helicopter draws heavily from previous work at Sikorsky on the X2 and S-97 Raider designs. The X2, a technology demonstrator that the Connecticut-headquartered firm first revealed in 2008, helped prove many of the features present in the SB>1, including the active vibration control that reduces the noise inside the aircraft during flight.

The company also hopes that the S-97, a private venture that has been flying since 2015, or a derivative thereof, could be a contender for the "light" component of the FVL program, which is focused on developing an armed scout rotorcraft akin to the now-retired OH-58D Kiowa Warrior. A Raider-based design might also fulfill the requirements for other emerging programs, such as the Army's proposed pilot-optional Future Attack Reconnaissance Aircraft Competitive Prototype (FARA CP). Other services have expressed an interest in the results of the FVL program, as well.

Boeing, which is separately working on a compound helicopter conversion kit for the AH-64, brings its own extensive experience with advanced rotorcraft to the partnership. The two companies also previously worked together on the abortive RAH-66A Comanche stealth helicopter program, which the Army canceled in the early 2000s after major cost-overruns. The SB>1 name itself is meant to reflect that the partnership is greater than the sum of its individual parts.

At present, Sikorsky and Boeing hope to get the Defiant prototype into the air for the first time in early 2019. The team had hoped this would occur this month, but had to push back the timeline after discovering unspecified issues with a drivetrain testbed.

“Sometimes its instrumentation that was installed [that didn’t] get the measurements we were hoping to get, or the software wasn’t reading properly,” Randy Rotte, Boeing's Director of Business Development for Cargo Helicopters and Future Vertical Lift program, told FlightGlobal earlier in December 2018. “We have some pieces... that required some mechanical repair.”

"It’s nothing that’s going to require a redesign of major components or any of those pieces," Rotte continued, as he emphasized that the issues were minor. "It’s candidly just some interactions that the models didn’t all capture."

This is another setback for the Defiant, which was originally scheduled to fly first in late 2017. That was when the Army had initially hoped to begin comparative flight testing between the SB>1 and Bell's Valor, which first flew in December 2017.

At that time, Sikorsky also indicated that the Honeywell T55 turboshafts that the Defiant is using now, similar to the engines Boeing has used for the CH-47 Chinook helicopter family, could limit the aircraft from delivering its full potential. The Army is pursuing a new, common engine for its UH-60 and AH-64 helicopters in parallel to the JMR and FVL programs and hopes that the improved powerplant will be available for future rotorcraft, as well.

Whatever the case, the Army is undoubtedly eager to get started in earnest on the JMR technology demonstration effort and move closer to the full FVL program. UH-60s and AH-64s "are not going to be what we need in the future," Lieutenant General James Pasquarette, the Army's Deputy Chief of Staff in charge of overseeing the resourcing of programs, told Defense News in October 2018.

"Our competitors out there, that we anticipate having to be ready to operate against, [that's] the environment drives us to make decisions," he continued. "We are very much studying the decisions we made in Comanche to make sure we don’t repeat them."

With the V-280 already flying and Sikorsky and Boeing's Defiant moving closer to its first flight, comparative tests look set to finally begin in the new year and get the Army another step closer to its next generation of rotary-wing aircraft.