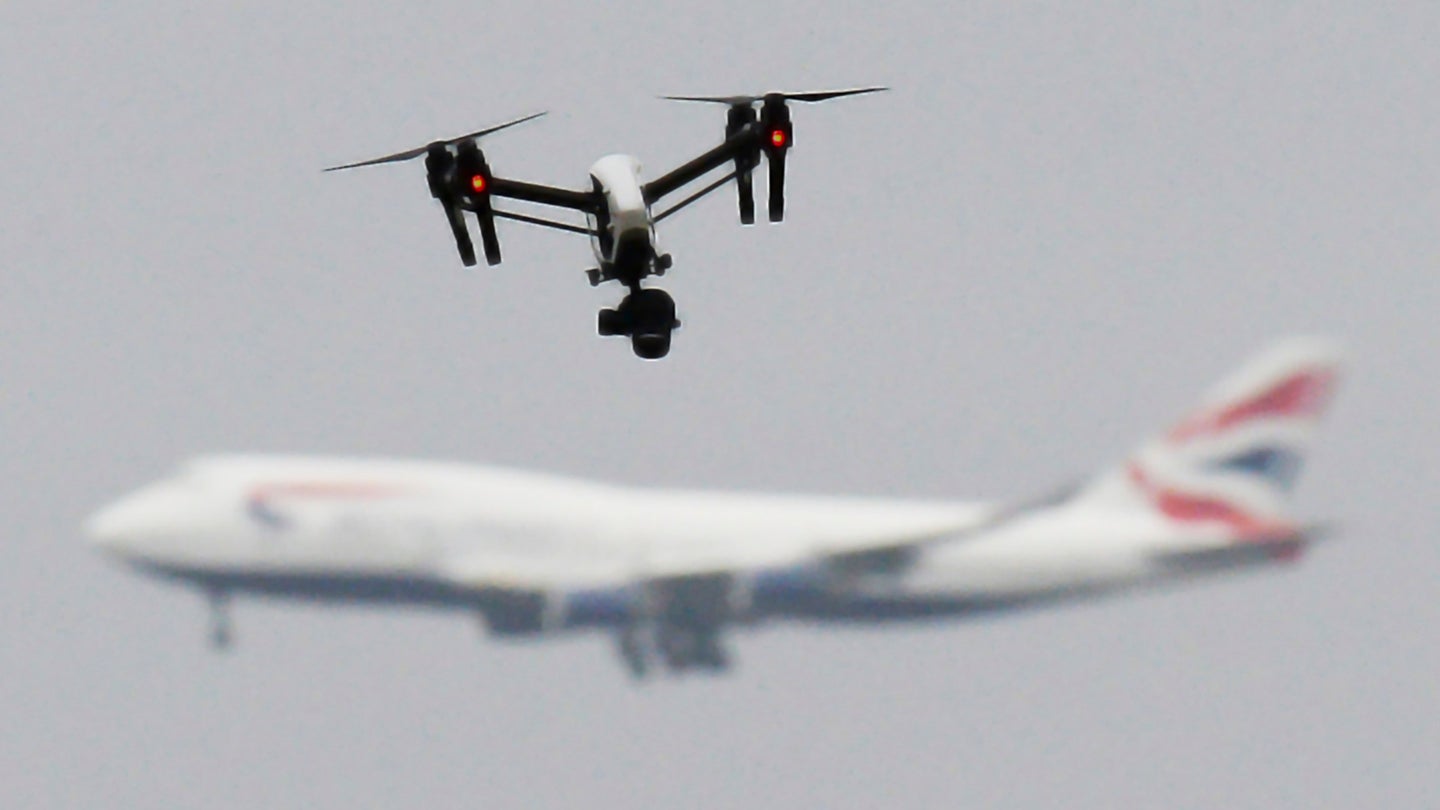 Flights at the United Kingdom's Gatwick Airport, the second busiest in the country, have been grounded for more than 20 hours at least due to small drones flying in the vicinity. The incident, which comes right as hundreds of thousands of travelers are beginning to set out for the holidays, underscores the dangers that easy to obtain hobbyist type unmanned aerial vehicles, such as quad- and hex-copter designs, present at home and on the battlefield. It's a growing, but glaringly foreseeable threat that we at The War Zone have been raising the alarm about for years.

Authorities at Gatwick halted all incoming and outgoing flights first at 9:00 PM local time on Dec. 19, 2018, after sightings of multiple drones. Officials tentatively expected that order to be lifted at 3:00 AM on Dec. 20, 2019, but have now extended the closure to at least 4:00 PM, as they continue to coordinate with Sussex Police and the U.K. military to ensure that it is safe to resume airport operations. Flights already in the air headed for Gatwick got diverted to other airports as far away as Paris, France. Approximately 110,000 people across 760 flights were set to use Gatwick on the 20th.

"We are carrying out a joint search w/ @Gatwick_Airport for the operators of #drones sighted at #Gatwick," the Sussex Police wrote in a Tweet on their official account on Dec. 20, 2018. "Public safety is paramount and we will take all available actions to disrupt this deliberate act. There are no indications to suggest this is terror related."

Under new regulations that the United Kingdom enacted on July 30, 2018, it is illegal for private citizens to fly small drones above 400 feet and within just over a half a mile of an airport perimeter. U.K. Prime Minister Teresa May has said any suspects involved in the incident face prison time when they are caught.

The most immediate danger from the small drones to air traffic at and around the airport is that they might collide with an airliner. If the remote-controlled aerial vehicles ended up ingested into a jet engine, banging into in a propeller, or crashing through the windscreen of an aircraft the results could be particularly devastating.

It is unclear what tools authorities have employed or considered employing so far to neutralize or mitigate the hazard. Airports typically have various protective measures in place to chase away birds, which present some of the same potential problems. However, these tools, such devices that create loud noises to scare flocks away, would have no impact on a drone.

Pictures have emerged showing members of the Sussex Police carrying shotguns, which they could use to try to shoot down the drones. Some companies have developed specialized shotgun shells to reduce the chance of missed shots posing a threat to nearby innocent bystanders or private property. Police helicopters have also been involved in the search for the operators of the remotely piloted aircraft.

Regardless, small unmanned aerial systems, especially quad- and hex-copters that can hover and quickly change direction, present difficult targets to hit, though, especially if they're flying at higher altitudes. Authorities have described the drones over Gatwick as being of "an industrial specification," suggesting that the pilotless aircraft involved may be on the more capable end of commercially available types.

"Sussex Police have requested some support from the armed forces and we will be deploying the armed forces to give them the help that they need to help deal with the situation at Gatwick Airport," U.K. Secretary of State for Defence Gavin Williamson told reporters later that same day. "Sadly, at this moment, it [what we are deploying] is not something we can actually reveal, but the armed forces have a range of unique capabilities and this isn't something we would usually deploy, but we are there to assist and do everything we can so that they are in a position to open the airport at the earliest opportunity."

These military capabilities most likely include additional tools to defeat the drones themselves and locate the individuals controlling them. Military short-range air defense or counter-battery radars, able to spot low-flying and even smaller targets, such as artillery shells and mortar bombs, could be useful in monitoring the drones and potentially tracing them back to an originating point. Electronic warfare systems, either on the ground or in the air, that can detect and geolocate transmitters, such as the drone's control unit, would also help immensely.

The U.K. military could also have more effective means of knocking the drones out of the sky, as well. Faced with the growing use of small drones, sometimes carrying grenade-like munitions, by both nation-state militaries and non-state actors, such as terrorists, militaries around the world have been investing heavily in active countermeasures.

The most common examples are man-portable and vehicle-mounted radio frequency jammers, though more advanced systems, including solid-state lasers and high-power microwave directed energy weapons are also in development. The jamming systems typically work by breaking the command link between the controller and the drone, either causing it to fall out of the sky or follow a pre-programmed route back to its operator. In the latter case, this could also help in finding the individuals responsible.

Jammers do have a significant number of limitations, though, including their relatively indiscriminate focus, which can interrupt signals from other nearby emitters operating on the same or adjacent frequencies. Jamming systems that work on a more narrow range of frequencies, or have more limited power, may mitigate those issues, but also have more limited effectiveness.

But however British officials ultimately tackle the situation at Gatwick, it will provide yet another call to action to further investigate how to regulate civilian use of small drones and how to defend against them when they become threatening. These are concerns we at The War Zone have raised on numerous occasions and you can read about them in greater detail here and here.

The hazard of small drones flying near airports is hardly new. In 2017, there were reportedly 100 potentially dangerous interactions between manned aircraft and drones in the United Kingdom alone, according to the BBC. Remember, the drones at Gatwick have done nothing but fly near the airport, as well.

On July 2, 2017, another drone intruder shut down Gatwick for a total of just 14 minutes, causing headaches for hours afterward. It will take days, if not longer, for the cascading impacts of these cancellations and delays, which have already stranded thousands of individuals or forced them to seek alternative travel options, will take days, due to this new incident to finally disappear. Gatwick had expected to see nearly 3 million travel through its facilities during this holiday season and 143,000 are presently booked to fly in and out of the airport just on Dec. 30, 2018.

This means that individuals responsible have been able to cause millions of dollars worth of economic damage with drones you can buy online right now for less than $5,000. Between diversions and people scrambling to find other ways of getting where they need to go, these impacts can easily spill over to other airports, as well. Perhaps the best example of an extreme worst-case situation is when nation-wide civilian air traffic in the United States ground to a halt in the aftermath of the 9/11 terrorist attacks, the impact of which is described in the video below. It took the airline industry years to fully recover from the billions of dollars worth of losses.

There was absolutely nothing stopping the individuals responsible for this latest crisis at Gatwick from adding more malicious payloads to their drones, either. These items could range from explosives and other actual weapons to laser pointers and hazardous waste.

The drones in question appear to have been operating independently, as well, but the technology to employ swarms of small unmanned aerial vehicles is rapidly evolving and proliferating. A large flock of drones acting in unison would be even more threatening and difficult to counter.

All told, this incident should be yet another wakeup call for authorities at Gatwick, and operators of airports and other major civilian infrastructure around the world, that they will only need to be more prepared to tackle these threats in the future.

Authorities at Gatwick have said that flight operations at the airport will remain shut down "for the foreseeable future including tomorrow" and have told travelers not to come. As we noted could happen, this incident appears to have become a massive disruption for air travel in the United Kingdom and in other countries with flights to and from Gatwick at one of the business travel times of the year.

At 3:00 PM local time, Gatwick Airport finally resumed flight operations. However, delays and disruptions due to the lengthy shutdown are likely to continue in the immediate future.