The Order of the Sword holds events full of pomp and ceremonial blades for officers, but its own lore is questionable. 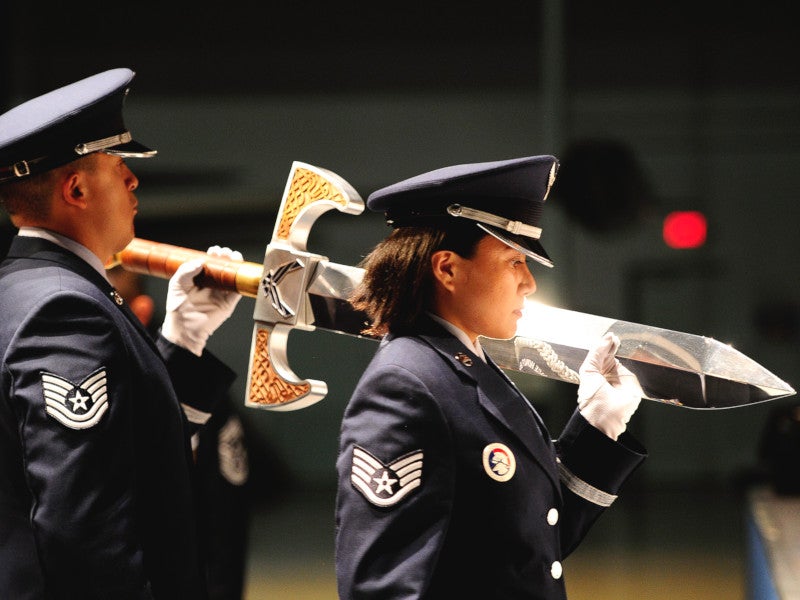 Social media is aflutter after Lloyd Russell-Moyle, the U.K. Member of Parliament for Brighton Kemptown from the opposition Labor Party, picked up a ceremonial mace in the House of Commons in protest of the country's top leadership and their efforts to extract the country from the European Union. The gilded weapon represents royal authority and the House of Commons officially can't hold formal debates unless it's sitting there in its proper place. The act of symbolic defiance got Russell-Moyle booted from the chamber for the day.

But before any of us Americans have too much of a laugh at archaic British traditions, it's worth noting that we have many of our own. The U.S. military alone has a whole collection of traditions and rituals, some old, some new, from challenge coins to the assignment of heraldry to re-enlistment ceremonies, and more. Some of these aren't even that old. Case in point, the U.S. Air Force's Order of the Sword and its ceremonial weapons, which typically look better suited to a pulp high fantasy novel, video game, or cartoons such as He-Man, She-Ra, or the ThunderCats than a modern-day military gathering.

Ostensibly, the Order, which awarded its first honor in 1967, is a way for Non-Commissioned Officers (NCO) to recognize the work of commissioned officers that has benefited the Air Force's enlisted corps. This all makes good sense and provides a good way to highlight officers engaging with their subordinates in positive and productive ways that should be a model for others across the service.

There are some reports that indicate the Order may have lost a sense of its original mission over the years, though, becoming more of an award that a select number of senior NCOs now increasingly hand out only to general officers at major commands as a matter of course. For instance, as of 2016, seven consecutive U.S. Air Forces in Europe (USAFE) commanders had received the accolade and it seemed highly unlikely that each one of them had made especially notable achievements with regards to their enlisted personnel.

Regardless, the ceremonies themselves, where officers typically receive a plaque or something similar, or even a framed sword, to mark their achievement, are, by far, the best-known aspect of the Order. Units keep much larger and gaudy swords – called Master Swords – on hand to mark these events.

These aren't just huge swords like Claymores of the past, as you'll see below.

A cursory search around the internet has not provided a good explanation for who started the ritual within the ritual of the swords or why. Like any good tradition, the origins of the Order itself are murky.

Official Air Force news items marking the induction of new officers into the Order offer various descriptions, harkening back both to the Middle Ages and the Revolutionary War. When now-retired U.S. Air Force General Herbert Carlisle received his award in 2016, when he was head of Air Combat Command, the service gave this typical description:

In 1522, King Gustavus the First, of Sweden, enjoined the noblemen he commissioned to appoint officers to serve him – accountants, builders, craftsmen, teachers, scribes and others responsible for conducting the ordinary daily affairs of the kingdom. The system worked so well it was incorporated into the Swedish army as a way to establish and maintain a cohesive, disciplined, well-trained force to protect lives and property in the kingdom. These ancient enlisted personnel would honor their leader and pledge their loyalty by presenting him with a sword."

These traditions were then passed on to the U.S. military during the Revolutionary War by individuals who had served in the British military and by European allies. There's only one problem, though. As others have rightly pointed out before, the origin stories that cite the U.K. Royal Order of the Sword and the Swedish Military Order of the Sword simply don't make sense.

For one, there is simply no Royal Order of the Sword in the United Kingdom. The Swedish Military Order of the Sword is real, but didn't exist until 1748, hundreds of years after King Gustavus I purportedly began the Medieval tradition, and hasn't inducted any new members since 1975.

Furthermore, Prussian-born Friedrich Wilhelm von Steuben, better known by the title Baron von Steuben, is credited with formally establishing the U.S. military's NCO corps as an advisor to the Continental Army and Chief of Staff to General George Washington during the Revolutionary War. His Regulations for the Order and Discipline of the Troops of the United States, more commonly known as the "Blue Book," remained the core U.S. military manual until 1812.

But if all of this backstory is overwrought and esoteric, it's still nothing compared to the ceremonial swords that appear to be made for giants. If you have any stories of your own about the Order or have a better understanding of how it and its increasingly large and ornate blades came to be, please let us know in the comments!