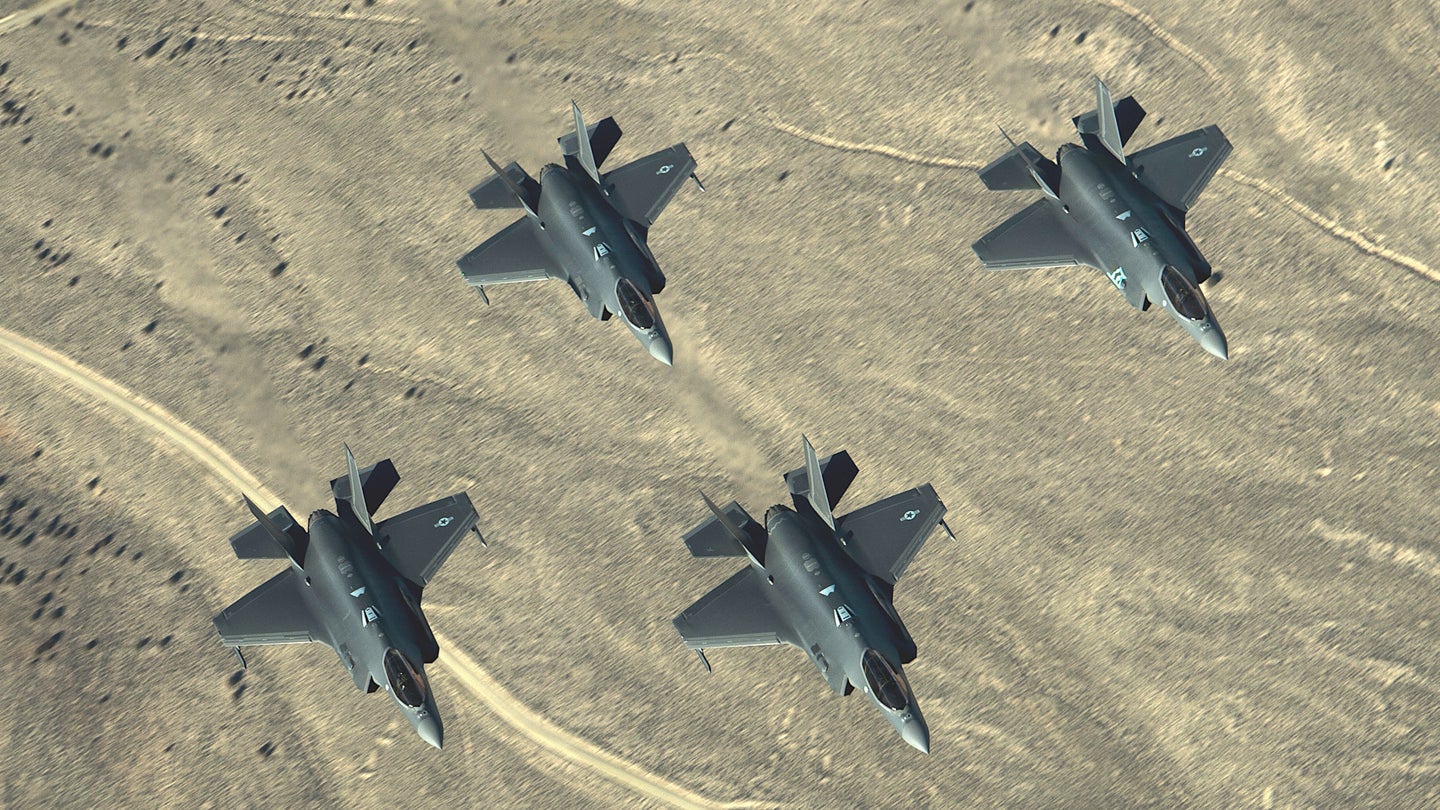 Almost two months after Hurricane Michael decimated Tyndall Air Force Base in Florida, the U.S. Air Force is recommending the permanent redeployment of F-22 Raptor stealth fighters from that base to other locations around the United States. At the same time, the service is now pushing to bring Tyndall back to its former glory as home to as many as three full squadrons of F-35A Joint Strike Fighters.

The Air Force announced its preferred course of action, which will be contingent on approval and funding for Congress, in a statement on Dec. 7, 2018. Tyndall is presently operating at a significantly reduced capacity after 95 percent of the base sustained damage as Hurricane Michael passed directly over it on Oct. 10, 2018. Hangars and other facilities associated with flight operations were among the hardest hit and the service expects it to take years to rebuild the base.

"We have been given a chance to use this current challenge as an opportunity to further improve our lethality and readiness in support of the National Defense Strategy," U.S. Air Force Chief of Staff General David Goldfein said in the statement. "We are talking with Congressional leaders about this plan and will need their help with the supplemental funding needed to restore the base," Secretary of the Air Force Heather Wilson added.

The plan the Air Force has unveiled would permanently reassign F-22s from the 325th Fighter Wing's 95th Fighter Squadron, an operational unit, to other Raptor squadrons at Langley Air Force Base in Virginia, Joint Base Elmendorf-Richardson in Alaska, and Joint Base Pearl Harbor-Hickam in Hawaii. This would bring the total number of stealth fighters in each of the remaining squadrons from 21 to 24.

The Air Force had already moved the 95th's jets to those locations to continue operations in the aftermath of the storm. A July 2018 Government Accountability Office report had already recommended that the service consolidate Raptor operations to improve readiness and reduce operational and maintenance costs.

Tyndall was also home to the 43rd Fighter Squadron, an F-22 training unit, and its supporting 372nd Training Squadron, Detachment 4, and the Air Force is still exploring possible options for their future homes. That decision will have an impact on the future of the T-38s of the 2nd Fighter Squadron, which provided dedicated adversary support for the Raptors at Tyndall. All three of these units have since moved to Eglin Air Force Base, also in Florida.

There is no word on what might happen to units operating QF-16 target drones and Mu-2 training aircraft from the base. The QF-16s, in particular, are important, if often ignored assets supporting Air Force training and weapons development requirements.

But whatever units assigned to Tyndall continue operating there in the end, the Air Force says it remains intent on continuing to use it a major base. In place of the Raptors and T-38s, the service could assign as many as three squadrons of F-35As to the base in the future, totaling approximately 72 aircraft.

"The F-35 is a game-changer with its unprecedented combination of lethality, survivability, and adaptability," Goldfein declared in the Dec. 7, 2018 statement. "Bringing this new mission to Tyndall ensures that the U.S Air Force is ready to dominate in any conflict."

The Air Force expects to take delivery of hundreds of Joint Strike Fighters in the coming years. The first F-35s could arrive at Tyndall as early as 2023. Nearby Eglin Air Force base is already home to the Air Force's main F-35 training unit, the 33rd Fighter Wing. The 33rd also presently supports U.S. Navy and Marine Corps F-35 training activities, as well as those of a number of foreign operators.

There had already been questions about how the Air Force would proceed with rebuilding Tyndall given the extent of the damage, which also exposed questions about building standards for hangars and other facilities situated in hurricane-prone areas. After Hurricane Andrew flattened Homestead Air Force Base in Florida in 1992, the service ultimately decided to dramatically scale back operations there permanently and turned it into an Air Reserve Base. Today, it is home to a single Air Force Reserve F-16 squadron and acts as a remote alert site for F-15C/Ds from the Florida Air National Guard.

Tyndall's direct access to approximately 130,000 square miles of training airspace over the Gulf of Mexico appears to have helped the base avoid a similar fate, at least for now. It also supports around 20,000 jobs in the communities surrounding the base and generates millions of dollars for the local economy each year. This has prompted state politicians and Florida's members of Congress to press to not only keep it open all, but to ensure it will eventually operate at or even above its pre-hurricane capacity.

There Air Force's stated plans still leave a number of questions unanswered, though. Overall, the service seemed to have largely dodged a figurative bullet with Hurricane Michael. The F-22s that were forced to weather the storm all escaped with only minor damage in most cases, but it was unclear initially whether that would be the case. There are concerns that global climate change will only increase the likelihood of especially severe hurricanes and other extreme weather in the future, only increasing the risk that no matter what improvements the service makes to the rebuilt Tyndall, that there will still be a danger of it getting wiped out again.

In addition, rebuilding Tyndall into a major base again will be a costly undertaking under any circumstances, but there will almost certainly be calls to build stronger hangars to prevent similarly widespread damage from occurring during future storms. In addition to those added expenses, the F-35s will require their own unique infrastructure and present new sustainment requirements.

This all raises additional questions about whether it would make more sense for the Air Force to expand F-35 operations at Eglin, where the service has already invested significant resources in expanding Joint Strike Fighter operations. If that base becomes a permanent home for F-22 training activities previously located at Tyndall, it will require added infrastructure anyway.

On top of that, the U.S. military as a whole is well overdue for another Base Realignment and Closure (BRAC) process to ensure its facilities are meeting demands in a cost-effective manner. The 1993 BRAC had a direct impact on the final decision not to fully rebuild Homestead and a future review of facilities could alter the Air Force's plans for Tyndall.

Any plans for Tyndall will depend on funding from Congress, too. President Donald Trump has already indicated that he will propose a defense spending cut for the 2020 Fiscal Year, but it remains to be seen how significant the decrease might be and whether legislators will seek to add in additional money for various projects. The Air Force will also have to conduct environmental and other assessments to confirm that Tyndall can accommodate rebuilt and new structures to support the service's plans.

From the Air Force's new announcement, it seems increasingly likely that the F-22s have left the base for good, but also that Tyndall's future could still be very bright.