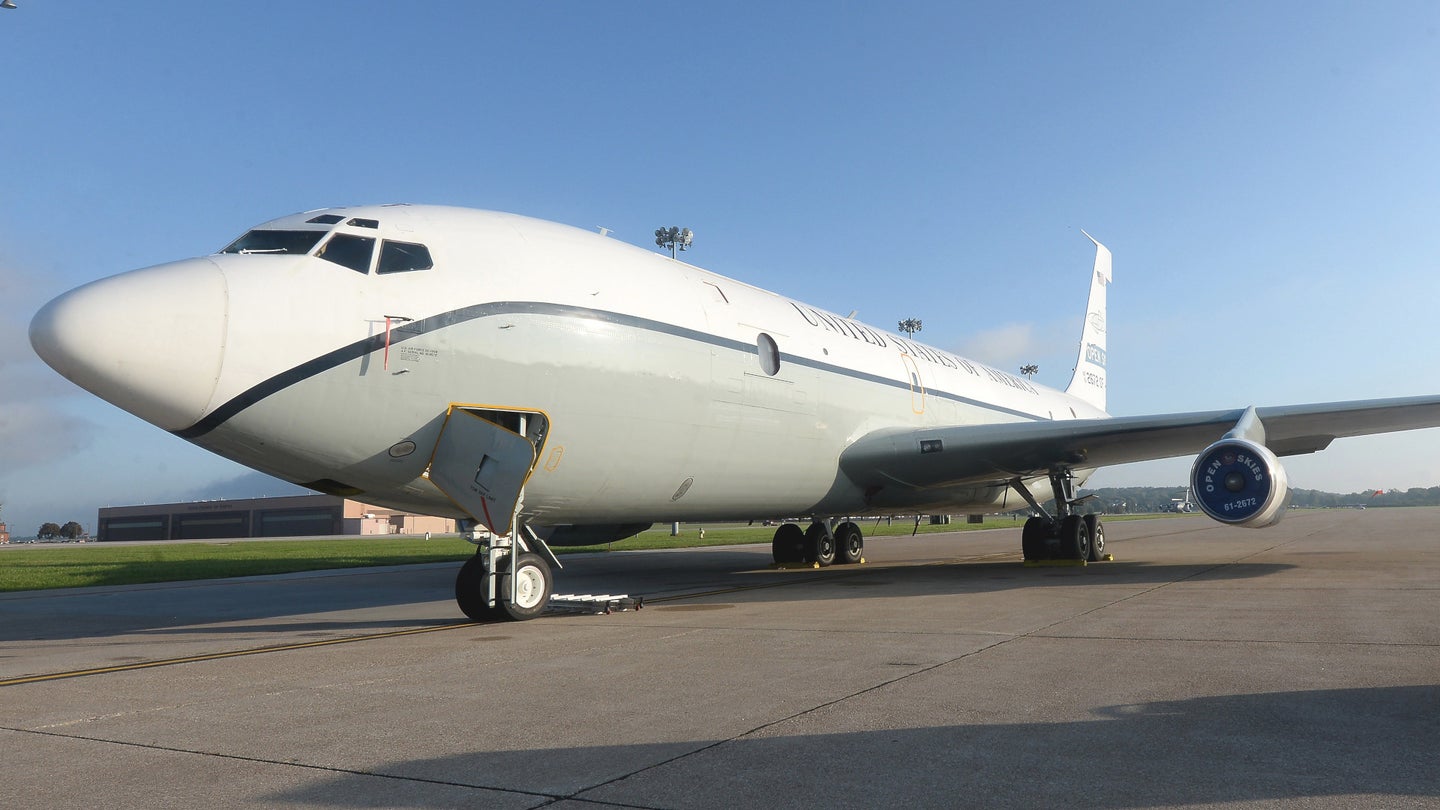 The U.S. Air Force has flown the first observation flight under the much-debated Open Skies Treaty in 2018 over Ukraine. The mission comes as Russian and Ukranian forces hold dueling missile drills amid inflamed tensions following a violent skirmish in the Kerch Strait between the Black Sea and the Sea of Azov.

The U.S. military announced it had conducted the “extraordinary flight” over unspecified areas of Ukraine on Dec. 6, 2018. Earlier plane spotters using online flight tracking software had recorded one of the Air Force’s two aging OC-135B Open Skies observation aircraft departing from Kiev. Russia's Tu-214ON Open Skies aircraft later took off from Moscow, but it is unclear if it was on its own mission under the terms of the treaty.

“The timing of this flight is intended to reaffirm U.S. commitment to Ukraine and other partner nations,” the Pentagon said in a brief statement on Dec. 6, 2018. “Russia's unprovoked attack on Ukrainian naval vessels in the Black Sea near the Kerch Strait is a dangerous escalation in a pattern of increasingly provocative and threatening activity.”

The Open Skies treaty, which entered force in 2002, gives signatories the right to conduct observation flights and collect imagery over the territory of other member states. The agreement sets out how high fidelity that imagery can be and at what altitude the aircraft can gather it. The deal ostensibly is to allow countries to monitor foreign military movements to ensure that they are non-hostile and reduce the chances for dangerous escalations and potential conflicts.

Per the treaty, an extraordinary flight comes at the request of the Organization for Security and Cooperation in Europe’s (OSCE) components “authorized to deal with respect to conflict prevention and crisis management” or other “international organizations” rather than a particular country that is party to the agreement. Individual members can volunteer their airspace or otherwise agree on a bilateral basis to conduct extraordinary flights, as well.

The U.S. military says this is the first such mission under the treaty since 2014. Regardless, the country where the flight takes place, in this case Ukraine, still has to approve it, but Kiev was likely eager for the mission to occur.

On Nov. 25, 2018, Russia’s security forces rammed Ukrainian naval vessels and shot at them in order to stop them from passing through the Kerch Strait, injuring multiple Ukrainian sailors in the process. The Kremlin claims that they had violated Russia’s maritime border and were sailing through the area without having provided advanced notice.

Ukraine has countered by citing international maritime law regarding innocent passage, as well as a 2003 agreement between Moscow and Kiev on shared use of the strait and the Sea of Azov. Video and audio that Ukrainian intelligence services subsequently made available strongly suggest that the Russians were determined to stop Ukraine’s vessels, and may have had a premeditated plan to do so, as well as to demonstrate their ability to enforce a blockade of the strategic Sea of Azov.

Russia has dismissed growing international condemnation of its actions. It is looking to put the Ukrainian sailors on trial for charges including violating its border and has moved many of them from Ukraine’s Crimea region, which Russia illegally seized in 2014, to Moscow. The two countries have been in a de facto low-level conflict since then, with the Kremlin actively supporting separatists in Ukraine’s eastern Donbass region.

Nearly two weeks after the brawl in the Kerch Strait, significant portions of Eastern Ukraine are under martial law and Ukrainian security forces have reinforced positions along the border with Russia. The Kremlin has also deployed additional S-400 surface-to-air missiles onto the Crimean Peninsula and sent more mechanized and airmobile troops to its Southern Military District. Airmobile forces were instrumental in Russia's blitz to take control of Crimea more than four years ago.

On Dec. 3, 2018, Russia also kicked off snap missile drills, involving Bal and Bastion-P coastal defense missile systems, which fire the Kh-35 and P-800 Oniks anti-ship cruise missiles respectively. The Kremlin reportedly sent out alerts indicating that it could be launching missiles into the Black Sea through Dec. 9, 2018.

The Bal and Bastion-P systems, combined with the S-400s, would present a major threat to any potential opponent during a conflict in and around the Black Sea or Sea of Azov. This is entirely design and since 2014, Russia has steadily built up its military presence on Crimea with this in mind. It has effectively become a fortress to deny freedom of movement to Ukraine’s military, or that of any country that might seek to come to its aid, full of missiles, fighter jets and other combat aircraft, gunship and transport helicopters, and general purpose ground forces.

In response to the latest crisis, the United Kingdom has still sent a small survey ship, HMS Echo, to the Black Sea and the United States plans to send a warship into the area soon. Given the extent of Russian defenses, these ships would face significant dangers in any actual conflict, though.

In addition, Ukraine is at a severe numerical disadvantage to the Russians when it comes to surface-to-air missiles and shore-based anti-ship defenses. But in response to the Russian actions, Ukrainian forces did conduct their own missile drills involving the “newish” Neptune anti-ship missile, a derivative of the Soviet-era Kh-35, and modernized S-125 short-range surface-to-air missiles.

What is particularly interesting are reports that the Ukrainians destroyed a number of maritime targets with the S-125s, demonstrating a potential limited anti-ship capability. The surface-to-air search and fire control radars could definitely have a secondary ability to spot and track targets of sufficient size on the water.

The United States has similarly shown that ships equipped with the Standard Missile-2 (SM-2) surface-to-air missile can engage surface targets with those weapons. Employing the S-125s in this way could definitely help expand Ukraine’s short-range anti-ship missile capacity, at least to some degree, before production of Neptune ramps up.

It is also possible that something got lost in translation and the Ukrainians only meant to indicate that they had engaged targets over the water with the surface-to-air missiles. Ukraine is in need of new and improved anti-aircraft defenses, as well, given the threat of Russian aircraft. The country continues to rely heavily on Soviet-era systems, many of which are increasingly obsolete.

Since the incident in the Kerch Strait, there have also been rumors of Russian forces massing for a major push into Ukraine, reports of a spike in fighting between Ukrainian forces and Russian-backed separatists, and generally increased tensions between the two countries all around. All told, using the Open Skies treaty to gain more insight into the situation and collect imagery that the OSCE can freely share among treaty members, and within the organization itself, makes good sense.

The European bloc has also been acting as an international monitor to the conflict in the Donbass, using satellite and other imagery to track direct Russian involvement in the fighting and other violations of the Minsk II agreement. That deal, which Ukraine, Russia, France, and Germany crafted in 2015 is supposed to de-escalate the conflict and requires Russia to move armored vehicles, artillery, and other heavy weapons away from its borders with the Donbass region.

Depending on where in Ukraine the OC-135B flew, it could have spotted Russian forces newly massed near the border. The last extraordinary Open Skies flight turned up evidence of Russia's military presence within Ukraine despite the Kremlin's denials. The Pentagon has declined to say what areas the flight covered, but it reportedly did not include Crimea or other disputed parts of the country.

The flight also serves to highlight the value of the Open Skies treaty, especially for smaller countries that do not have the benefit of intelligence, surveillance, and reconnaissance aircraft able to gather useful information from international airspace or ready access to high-fidelity satellite imagery of areas of interest. The agreement also gives member states big and small, as well as the OSCE itself, a powerful mechanism to demand oversight of their neighbors’ potentially provocative moves.

That the United States conducted the mission on Dec. 6, 2018 has added significance given that the treaty has been under increasing fire from critics in the U.S. government. Members of Congress and the U.S. military have accused the Kremlin of exploiting the deal to gather more detailed intelligence about its military capabilities and had long opposed plans by Russia to field improved observation aircraft with digital cameras.

Regardless of the merits of those complaints, the United States had already acquiesced to the Russians field the same digital camera system on Russia’s existing Tu-154M-ON plane. The U.S. government finally agreed to certify the new Tu-214ON aircraft in September 2018.

In addition, the flight over Ukraine is notable in that it is the first Open Skies flight for any reason in 2018. It remains unclear why this has been the case, as the certification dispute between the United States and Russia, as well as those two countries registering complaints about each other's flights over certain areas, would not have prevented all flights from occurring.

Georgia had refused to sign off the annual agreement regarding quotas of total flights that signatories are allowed over a separate dispute with Russia, but reportedly this issue has been resolved. This could still explain why the latest mission over Ukraine was an extraordinary one under the auspices of the OSCE, which does not count against the quota for any particular country.

Regardless of the present state of the Open Skies treaty or its future, the latest flare-up in the conflict between Ukraine and Russia showing no signs of abating. It’s very possible that the OSCE and its partners may increasingly turn to extraordinary flights as an important tool to keep a closer eye on troop movements and other developments that could point to the beginnings of a larger conflict in the region.