The team plans to pitch the A330-based tanker's services to the Pentagon and jointly develop all new tanker concepts. 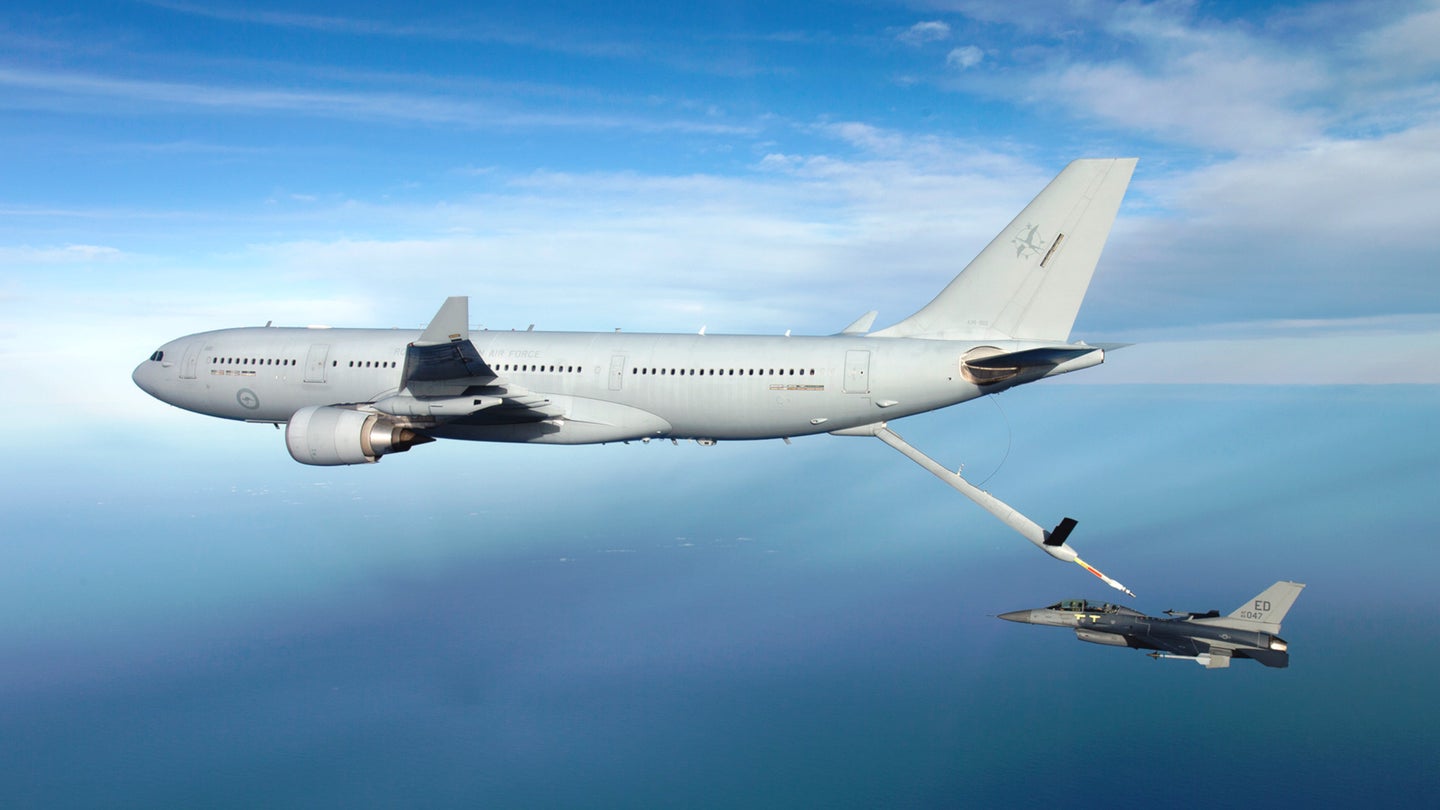 Lockheed Martin and Airbus have announced that they will work together to pitch various aerial refueling solutions to the U.S. military. The two companies say the will explore everything from contracting out aerial refueling tankers to collaborating on the development of a next-generation tanker aircraft.

The American defense giant and European aerospace consortium revealed their new partnership in a joint press release on Nov. 4, 2018. The memorandum of understanding between the two firms comes after the U.S. Air Force announced a desire to add 14 new aerial refueling squadrons as part of a larger proposed increase in its overall force structure. The service has also suffered repeated setbacks in getting the first of its new Boeing KC-46A Pegasus tankers. In addition, the U.S. Navy and U.S. Marine Corps have increasingly turned to contractors to provide aerial refueling services for training as well as developmental and operational test and evaluation activities in recent years.

"Reliable and modernized aerial refueling is an essential capability for our customers to maintain their global reach and strategic advantage," Marillyn Hewson, Lockheed Martin's Chairman, President, and CEO said in the press release. "By combining the innovation and expertise of Airbus and Lockheed Martin, we will be well-positioned to provide the United States Air Force with the advanced refueling solutions needed to meet 21st century security challenges."

"The U.S. Air Force deserves the best aerial-refueling technology and performance available under the sun and this great industry team, Lockheed Martin and Airbus, will offer exactly that," Tom Enders, Airbus CEO, also said. Airbus' well-established A330 Multi Role Tanker Transport (MRTT), already in service around the world and certified to refuel numerous American-made combat and combat support aircraft, will be at the "heart" of the partnership.

This is hardly the first time Airbus has teamed up with an American firm to pitch the A330 MRTT directly to the Air Force. In the early 2000s, the European firm submitted this aircraft as an option in a competition that Boeing subsequently won, but which turned into a massive scandal. Darleen Druyun, then the Air Force's top civilian procurement official, spent nine months in prison after a federal court found she had deliberately manipulated the contracting process in Boeing's favor.

Airbus, then known as European Aeronautic Defence and Space Company (EADS), working with Northrop Grumman, re-submitted the A330 MRTT to the rebooted tanker competition in the mid-2000s. This time, the Air Force selected the Americanized version of this aircraft, known as the KC-30A, which was fitted with a refueling boom in addition to the probe-and-drogue system, reshuffling equipment that the Navy and Marines, as well as many foreign countries, utilize. The Air Force had to abort its contracting process a second time after a successful protest from Boeing.

A third iteration of the tanker competition led to the Air Force picking Boeing's KC-46A Pegasus over the EADS/Northrop Grumman KC-45A, another U.S. military designation applied to the A330 MRTT, in 2011. This contract had gone ahead, but the KC-46A program has suffered repeated technical problems, delays, and cost overruns since then.

The Air Force has yet to take formal delivery of the first Pegasus after Boeing missed the latest agreed-upon deadline, which had been set for some time in October 2018. These difficulties, combined with the increasing age of the service's KC-135R/T Stratotanker and KC-10A Extender fleets, may well open up space for a challenger to Boeing's long-held dominance of the U.S. military tanker market in the future. The Air Force has already had to consider pushing back plans to begin retiring the KC-10s from 2019 to 2024.

That being said, it isn't all that likely that Lockheed Martin and Airbus will propose direct sales of A330 MRTT yet again. Instead, a leased or contractor owned-and-operated model should be the consortium's primary focus. The Air Force has considered using leased tankers in the past and Airbus could leverage the business model it has already developed for the United Kingdom and other European countries as head of the AirTanker consortium.

The U.K.'s Royal Air Force (RAF) is AirTanker's primary customer and presently leases nine A330 MRTTs, known as the Voyager in RAF service. In addition, the United Kingdom has access to five more planes as necessary as part of an agreed upon "surge" capability as part of the 30-year contract that began in 2004.

When the surge planes aren't in use, thanks to the MRTT's modular configuration that also allows it to act as a cargo and passenger transport, AirTanker can also remove the aerial refueling equipment and lease them to airlines and air cargo services essentially as standard A330s. Though it generally gets little attention, the Air Force regularly uses its tankers in the transport role and the KC-46A also has a purpose-built, reconfigurable multi-role interior.

The conversion process to turn the A330 MRTT into a civilian configuration reportedly takes around three weeks depending on the desired interior layout. For the United Kingdom, its deal with AirTanker creates a cost-sharing arrangement where it doesn't have to pay for the full fleet at all times and consortium can generate revenue using the surge aircraft when they're not required for their aerial refueling duties.

This is a model that could easily appeal to the Navy and Marine Corps, as well, which otherwise have to rely in large part on already heavily taxed Air Force tanker fleets. Those two services have already increasingly employed contractor owned-and-operated tankers to support non-combat activities, such as training and developmental flight testing and operational evaluations. Other companies have already been looking to take advantage of this growing market.

Lockheed Martin and Airbus could offer a fully contracted option with private aircrews employing the A330 MRTT, as well. We at The War Zone have discussed in detail the benefits of utilizing privately owned-and-operated tankers for certain mission sets in the past and how doing so would free up KC-10s and KC-135s for actual operational missions down range and would save money. Our own Tyler Rogoway laid out the arguments for the Pentagon embracing contractor tanking on a much grander scale as such:

As the KC-46A comes online, it will be a great time for potential commercial tanker services providers to absorb retiring KC-135Rs, or introduce new platforms depending on what their customers want.  Even smaller tankers, like those based on the 737 or G550, can fulfill many missions where large tankers simply are not needed and do so at a far lower cost.

Under such a concept, it has been proven that industry, the service and the taxpayer win. On the tanking front, Omega Air has been doing this for some time now for the Navy and international customers, and other countries are following suit. Additionally,  private tanker companies’ adversary air support contractor cousins will increasingly provide aggressor training for the same US Navy and USAF fighter aircraft that private tanker companies of the future could be supporting as well. Doing so will introduce competition into the marketplace and will allow the USAF to invest heavily on higher-end capabilities, like stealth tankers, instead of maintaining a one-size fits all tanker armada. The problem is that without the weight of the USAF in the marketplace, there really won’t be a robust marketplace at all.

Once again, the same thing is already happening with private adversary support contractors. It is simply too expensive and wasteful to fly an F-35 around as an intercept target for another F-35, the same can be said for putting large formations of enemies up in the air at one time to really challenge a 5th generation fighter pilot. As such, the USAF will follow the Navy’s example and will become more dependent on private adversary support companies for their training needs as their 5th generation fighter fleet continues to grow. Not embracing a similar strategy now for offsetting a portion of the USAF’s tanker needs is wasteful as procurement decisions are being made without factoring what is more of an eventuality than a possibility at this point.

If the USAF were to embrace a restructuring of their tanker recapitalization plans and were to widely accept that private contractors can provide a portion of their tanker needs, these savings could be reinvested into a stealth tanker program and to build more KC-46s at a lower unit cost."

As stated, savings by pushing some aerial refueling tasks off to contractors could be used for the development of new, advanced tanker concepts that will be increasingly vital for high-end operations in the future. Interestingly, Lockheed Martin and Airbus make mention of this reality as part of their new partnership, as well.

"Airbus is an industry leader in the aerial refueling area, and Lockheed Martin is known for cutting-edge defensive technologies and capabilities," Michele Evans, the Executive Vice President of Lockheed Martin Aeronautics said in the official press release. "This is a great opportunity for our two companies to combine our expertise – cooperating to develop world-class solutions for critical needs around the world."

The two companies are planning to look into "conceptualizing the tanker of the future," which seems to be more than a veiled reference to Lockheed Martin's existing work on stealthy tankers and other novel aerial refueling concepts, including swarms of refueling drones, for the Air Force, which you can read about in depth here. European and other militaries are also increasingly aware of the potential vulnerability of their tankers in a major conflict against an opponent with a robust, integrated air defense network, too.

A jointly developed design could be especially attractive to both the United States and NATO members, as it could help ensure interoperability during the alliance's operations. It would also spread the cost burden of developing such an advanced aircraft while providing lucrative opportunities for industrial cooperation to European defense contractors. In this regard, many firms in Europe have already formed links with Lockheed Martin as part of the F-35 Joint Strike Fighter program.

For Lockheed Martin, pairing up with Airbus on tankers also opens up possibilities for greater cooperation between the two companies in other sectors. For the Maryland-headquartered conglomerate, it could pave the way for access to the European consortium's booming commercial aviation business.

Lockheed Martin hasn't offered a passenger plane since failing to find success with the L-1011 TriStar in the 1970s and 1980s. In December 2017, the firm had announced a separate partnership with aviation startup Aerion, which is hoping to revolutionize supersonic air travel, an agreement that could also give it a path back into the commercial sector.

All told, Lockheed Martin and Airbus joining forces to work on future tanker aircraft and "fee-for-service" aerial refueling options for the U.S. military, and potentially other countries, makes good sense and it will be exciting to see what comes out of the partnership in the future.