The available information suggests that the Russians may have put yet another secretive "killer satellite" into orbit. 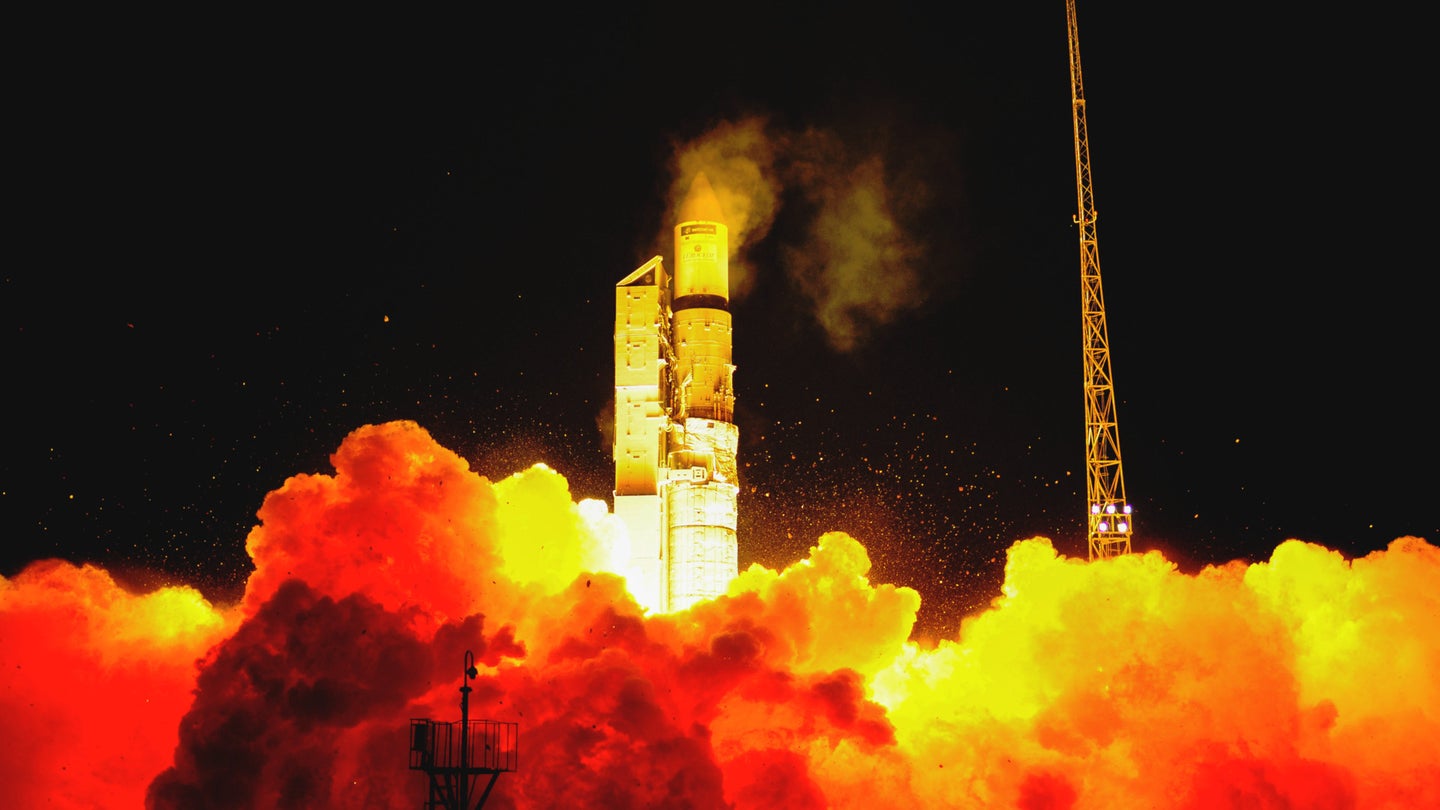 The Russian military says it successfully placed three classified communications satellites into orbit today, along with the upper stage of the rocket that put them there.  But according to the U.S. military's Combined Space Operations Center, or CSpOC, a fifth object, possibly another, unannounced satellite, may have hitched a ride into space on the launch.

The Rokot/Briz-KM launch vehicle blasted off from Pad 3 at Site 133 at the Plesetsk Cosmodrome in Western Russia at just before 5:30 PM local time on Nov. 30, 2018, according to RussianSpaceWeb.com. At approximately 7:12 PM, the three Rodnik communications satellites had deployed into their assigned orbits. Russia has named the trio of satellites Kosmos-2530, Kosmos-2531, and Kosmos-2532.

This would all be rather banal had the CSpoC, as well as the U.S.-Canadian North American Aerospace Defense Command (NORAD), not recorded the launch slightly differently. Information on Space-Track.org, a U.S. government website that publicly releases data on space launches from the CSpoC and NORAD, listed Objects A through E as resulting from the launch from Plesetsk. This would include the three satellites and the upper stage, but the fifth object is unexplained.

It is possible that the upper stage simply fragmented into multiple pieces that were large enough for the U.S. military to track independently. Three of the objects – A through C – have essentially same perigee, the point in their orbit at which they are nearest to the earth. The other two objects – D and E – share a different general perigee.

But there is also the distinct possibility that this could be yet another so-called "inspector satellite." More on that later, but we've actually seen almost exactly the same thing happen at least once before.

On May 23, 2014, another Rokot/Briz-KM launch vehicle put three Rodnik communications satellites into orbit. Again, the U.S. military tracked five objects, with Object E, in that case, turning out to be an inspector satellite known as Kosmos-2499. The perigees and other data for the five objects are extremely similar in both cases.

If this new Object E turns out to be another inspector satellite, the Russians will have now launched at least five of these that we know about. Russia launched the first three – Kosmos-2491, Kosmos-2499, and Kosmos-2504 – between 2014 and 2015. In June 2017, the Russians put a fourth such satellite into orbit known as Kosmos-2519.

To make matters more confusing, that satellite subsequently deployed another one, Kosmos-2521 in August 2017. A third subsatellite, Kosmos-2523, subsequently appeared from this cluster two months later. These three small satellites are typically treated as a single system.

So, what is an inspector satellite? They ostensibly do just that, inspect other objects in space. From a benign perspective, this makes good sense, since it gives personnel on the ground a means of investigating damaged or malfunctioning objects in space remotely before deciding how best to proceed with repairs or replacement.

There have even been proposals to give these maneuverable satellites their own limited ability to perform repairs. The United States and China, as well as Russia, have all be developing these types of satellites.

The video below shows a concept the U.S. Defense Advanced Research Projects Agency has been working on regarding an advanced inspector-type satellite called a Robotic Serving Vehicle (RSV).

However, as we at The War Zone have noted on multiple occasions in the past, these same orbital inspectors could double as orbital spies or weapons. The craft are, by definition, capable of precise maneuvering to get close to the object of interest, have cameras, and may have small manipulator arms to help with their work. This would just as easily allow them to gather intelligence on foreign satellites or possibly disable or destroy them. They might even carry their own electronic warfare suites or other systems to blind or jam their targets.

They might offer the Russians a way to locate top-secret spy satellites that certain countries, such as the United States, might not even acknowledge exist and that might be otherwise shielded from detection. We at The War Zone have previously explored the compelling information available that the U.S. government has been actively developing stealth satellites, or is at least very interested in the applicable technology, specifically to shield its space assets from potential terrestrial and space-based threats.

In addition, their diminutive size could make them hard to track, especially if they hid next to their target, lying in wait, or blended in with the extensive amount of "space junk" floating about the Earth's atmosphere. The ability for even smaller satellites to act as motherships for even tinier systems, as was apparently the case with Kosmos-2519, -2521, and -2523, could make it even harder to judge exactly what "inspector" capabilities an opponent may actually have in orbit. Inspector satellites have also generally been small enough for the Russians to include unannounced in other launches in the past.

The Kremlin has categorically denied that any of these satellites, which it calls "space apparatus inspectors," are weapons. Most recently, the Russians denounced concerns that Yleem Poblete, the U.S. Assistant Secretary of State for Arms Control, Verification, and Compliance, raised in August 2018 about the purpose of Kosmos-2519 and its associated sub-satellites as "unfounded, slanderous accusations based on suspicions." The Russian government, however, has not provided any hard evidence to support their insistence that the satellites are entirely non-threatening.

But it is also clear that the Russians have an active and multi-faceted anti-satellite weapons program. In September 2018, The War Zone was first to report on the emergence of a new, air-launched anti-satellite interceptor and a specially modified MiG-31 Foxhound fighter jet to carry it. Russia also has ground-based interceptors that could engage satellites and claims to be working on airborne laser systems that may be able to blind or damage the optics on spy and early-warning satellites.

This makes perfect sense for the Kremlin. As such, the Russian military and intelligence agencies, which have far fewer satellites in orbit than the United States, have strong incentives to develop various means to curtail the significant American advantages in space-based early warning, intelligence gathering, navigation and weapons guidance, and communications during any potential future conflict. China, for similar reasons, has also been pursuing a robust anti-satellite capability.

The United States has woken up to its reliance on space-based capabilities and the growing threats to the support infrastructure, including satellites, which we have explored in detail in the past. Unfortunately, at least at present, addressing these issues has found itself wrapped up in defense budgeting and domestic politics, distracting from the real issues at hand.

On top of that, space-based weapons present unique challenges for the international community, especially since neither the United States nor Russia has so far been able to articulate the exact threshold for what would constitute a conflict in space. The U.S. government also opposed treaties that have been proposed so far to limit space-based weapons, arguing that the language is vague and unenforceable and the terms are unverifiable. Dual-use systems that have legitimate non-weapon functionality, such as inspector satellites, don't help efforts to try and firmly establish these definitions.

In the meantime, Russia doesn't appear to be slowing down the development and expansion of its anti-satellite capabilities. As part of that push, it may very well have just added to its constellation of possible "killer satellites."