The U.S. Navy says that Raytheon’s Next Generation Jammer-Mid Band pod, of NGJ-MB, at least in its present form, further reduces the maximum range of the EA-18G Growler over the current system. This was one of the reasons why the service rejected the company’s proposal for the Next Generation Jammer-Low Band pod, NGJ-LB, and could present operational challenges in the future.

This information and more is contained in a response from the Government Accountability Office (GAO) dismissing Raytheon’s protest of the Navy’s decision to award two separate contracts to L3 and Northrop Grumman for continuing development of the NGJ-LB in August 2018. While the GAO’s basic determination had been public knowledge since October 2018, the document outlining the watchdog’s position in detail had been previously sealed under a protective order. It is now publicly available, albeit in redacted form.

“Raytheon challenges the Navy’s criticisms of its proposed low band jammer with respect to size, drag, EIRP [Effective Isotropic Radiated Power, a measure of the efficiency of a transmitting antenna], and weight,” GAO explained. “We have reviewed all of Raytheon’s arguments and find no basis to sustain the protest.”

Raytheon’s NGJ-LB concept was derived from their design for the NGJ-MB, also known as the AN/ALQ-249(V)1, which has been in development since at least 2010. At present, the Navy’s EA-18Gs carry three AN/ALQ-99 Tactical Jamming System pods in both high- and low-band configurations, which first entered service in the 1970s.

The NGJ-MB will replace the high-band ALQ-99 pods that Growlers carry under each wing, while the NGJ-LB will replace the third, low-band pod that the aircraft lug around on the centerline stores position underneath their fuselage. The Navy does plan to eventually procure an improved high-band jamming capability under the broader NGJ program, but it remains to be seen whether this will consist of additional systems inserted into one or more of the pods already in development or consist of a separate unit altogether. You can read more about these various components and other issues in our recent in-depth profile of the program here.

The Navy found that Raytheon’s proposal for the NGJ-LB would be too big for the centerline stores position and expressed concerns about potential weight growth. Raytheon contended that the service had unfairly judged these parameters since it had already cleared the Growler to fly with a 480-gallon drop tank under the fuselage. This store is also outside the approved “volume” for that station. The Massachusetts-headquarters defense contractor also argued it would leverage weight reduction experience from its NGJ-MB work to help reduce risk.

However, Raytheon’s planned NGJ-LB would have exceeded the maximum volume by a greater margin than the 480-gallon drop tank, which is also not a common store for the EA-18G during routine missions. The Navy reiterated that it had made it clear that any proposals needed to be within the set parameters, regardless.

As to the weight issue, the Navy acknowledged it had miscalculated the potential growth that Raytheon’s pod might experience. At the same time, it said that the company couldn’t base its own projections on experience with the NGJ-MB, since the internal components inside the low-band pod would be significantly different.

The separate requirements in antenna types and other components between the mid- and low-band pods, and their arrangement within the pod, was also what led the Navy to question the EIRP of Raytheon’s proposed configuration. The mid-band system itself has already had to undergo a major design overhaul due to difficulties in inserting the required jamming equipment and its power supply into the set size and weight parameters for that pod.

But by far the biggest revelation from the GAO’s decision is that Raytheon’s NGJ-MB pods, which the Navy still intends to use on its EA-18Gs, produce more drag than the ALQ-99s and will reduce the overall range of the aircraft. This issue was the final reason why the service rejected the firm’s bid for the low-band pod.

This is, at least in part, a result of how Raytheon crafted the power-generation system for its pod. When the jammers are running, two pairs of doors, one set on each side of the pod, open to allow air in to drive ram-air turbine. The ALQ-99s have small propellers at the front that perform the same basic function and also produce drag, but less than of the new design.

It is worth noting that the Navy did not require the drag coefficient for either the mid- or low-band pods to be equal or less than that of the ALQ-99s. However, it still has the potential to create significant operational challenges depending on how pronounced the loss of range is.

Enemy surface-to-air missile systems and their associated radars and other sensors, as well as the sensors suites on fighter jets and dedicated early warning aircraft are only increasing in range and capability. Shore-based anti-ship defenses are similarly improving. All of this will require American aircraft carriers to launch strike packages ever further away from their actual objectives.

The video below shows various layers of present and future Chinese anti-air and air-ship defense systems that the country has and is developing as part of its strategy to deny its opponents access to broad areas during a potential conflict. These are just some of the threats American carriers and their air wings might have to contend with in the future.

The Growlers typically fly with two drop tanks, but cannot carry any additional ones on the wings or underneath the fuselage and still perform their core mission. Those stores stations are taken up by the jamming pods.

The EA-18Gs are capable of refueling in flight, but at present, Navy Carrier Air Wings have a severe lack of organic air-to-air refueling capability. Plans to field a fleet of unmanned carrier-based drone tankers, known as the MQ-25A Stingray, are still years away from coming to fruition. Other tankers from the U.S. Air Force or foreign partners may be another option, but would not necessarily be available during distributed or expeditionary operations.

With these limitations, it could be harder for the Growlers to get to the target area and remain there on station for extended periods of time. Unless whatever low-band pod design the Navy chooses to procure in the future has equal or less drag than the existing ALQ-99, it could still exacerbate this issue, as well.

It could also have repercussions for the proposed high-band pod. The Navy wants the pod to be open-architecture to allow for the rapid insertion of new hardware and software as time goes on, but it's not at all clear if the existing size and weight parameters of the mid-band pod will be able to accommodate the desired high-band jammers.

Raytheon’s design may mitigate the issue somewhat in that the doors for the ram-air turbine do not need to be open all the time, unlike the ALQ-99’s front-mounted propeller, which is constantly exposed. Still, it appears that, by the company’s own calculations, there is still an overall loss in range with the current configuration. This, in turn, raises questions about whether the range reduction becomes more pronounced if the aircraft spend more of their flying time actually jamming.

A more immediate solution would be for the Navy to acquire conformal fuel tanks (CFT) for the EA-18Gs. It is already working with the aircraft’s manufacturer, Boeing, to develop CFTs for its F/A-18E/Fs, but has not said whether those upgrades would extend to the Growler fleet. The added fuel will give Super Hornets an average of 100 to 120 miles of additional range depending on their stores loadout.

There have also been long-standing discussions about an engine upgrade for the Super Hornets, which might also filter down to the Growlers. This could improve overall fuel efficiency and increase range. The Navy has not yet formally decided to pursue this update for either the F/A-18E/F or EA-18G, though.

The EA-18Gs have been in desperate need of new, more capable jamming pods for some time now, with the ALQ-99s having had noted reliability issues for years already. At the same time, electronic warfare capabilities will only become more vital to the Navy’s Carrier Air Wings and their ability to operate in high-risk environments as time goes on.

The mix of higher- and lower-band electronic warfare capabilities will remain important even with the Navy's introduction of the stealthy F-35C Joint Strike Fighter. The low-band pod, especially, will also be ideally suited to jamming longer-range, lower-frequency radars, which may be able to detect stealth aircraft.

But for Growlers carrying the new pods to be most effective, the Navy will also have to find ways to ensure the aircraft can make it to the target area and stay there long enough and in sufficient numbers to adequately perform their mission. 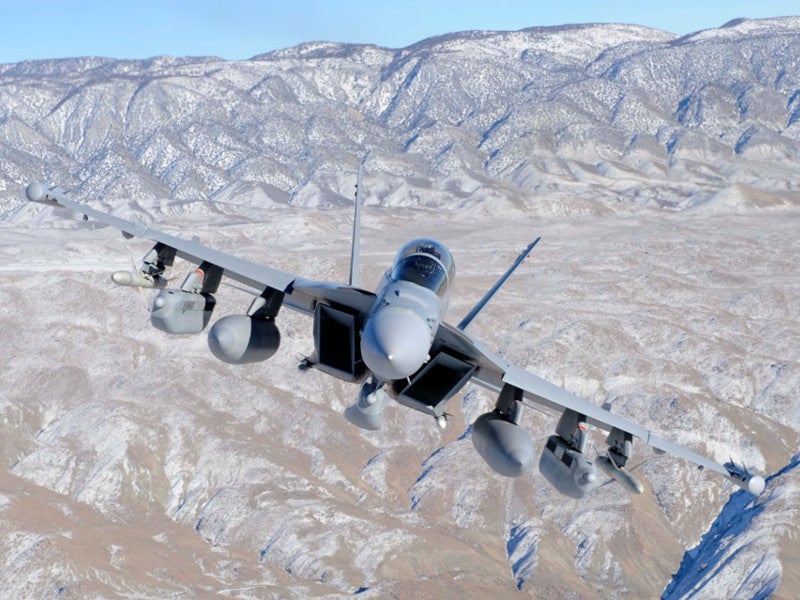 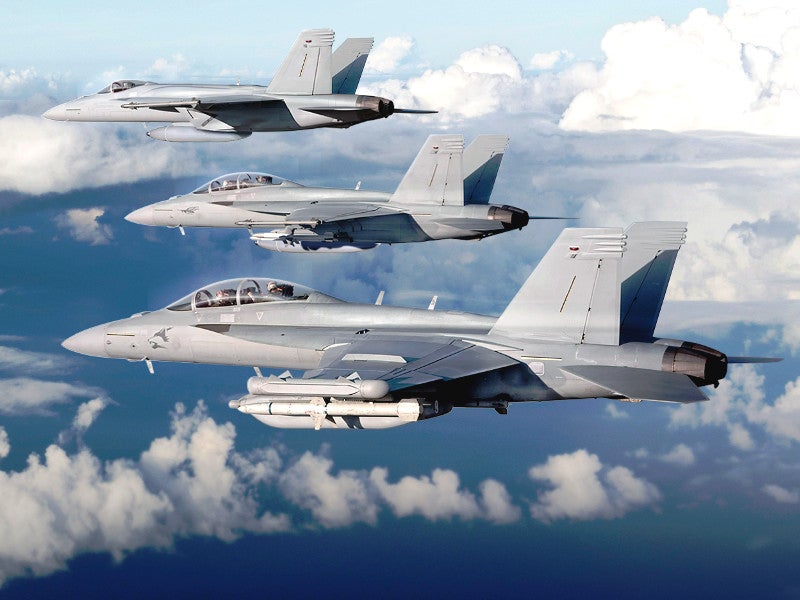 The new Block III configuration is on track for the U.S. Navy, but some update options aren’t included. 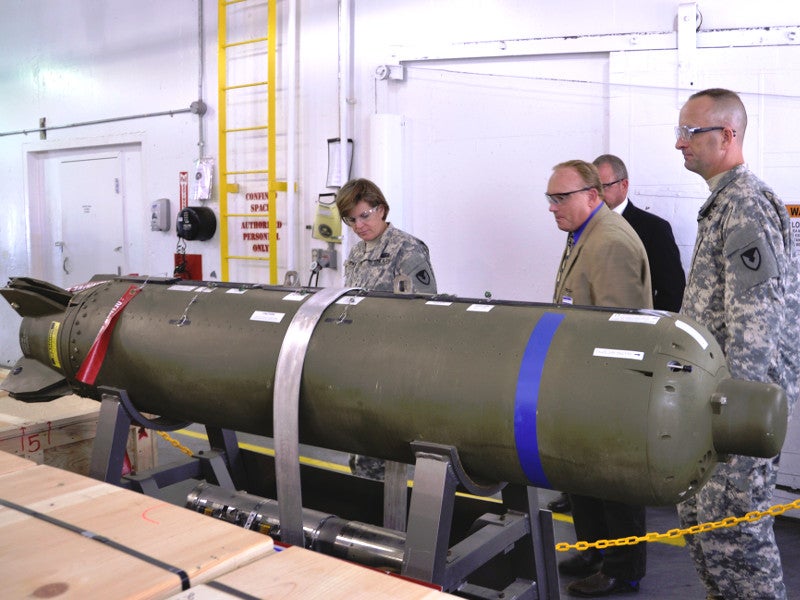