The blaze is the latest in a series of major accidents at Russia's beleaguered naval bases and shipyards in 2018. 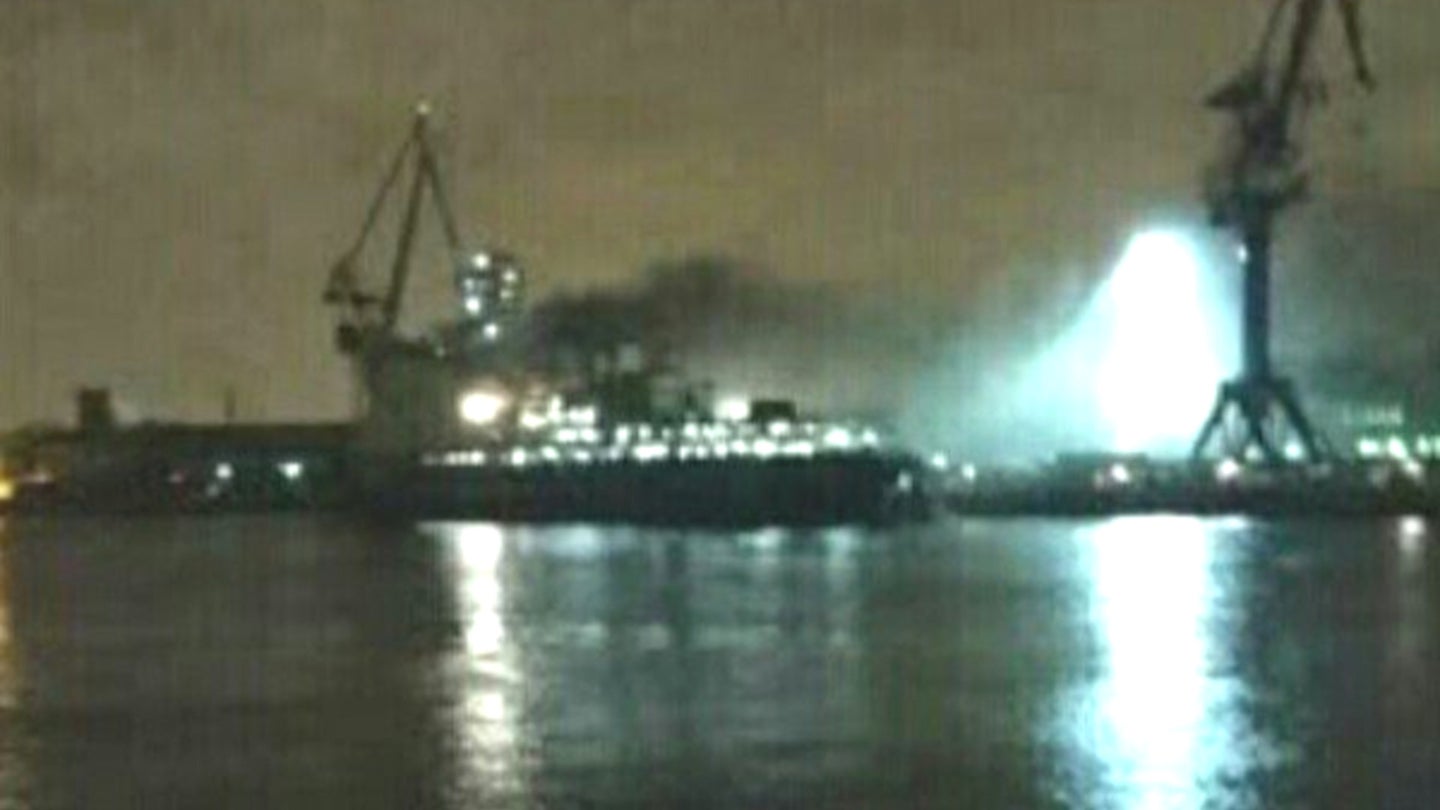 Information is still coming in, but Russia's future Project 22600 icebreaker the Viktor Chernomyrdin, which is under construction at Admiralty Shipyard in St. Petersburg, has caught fire, injuring at least two people in the process. This adds to a string of fires on board Russian government-owned vessels in 2018 and comes less than a month after a major Russian Navy accident in which the floating dry dock PD-50 sunk while the aircraft carrier Admiral Kuznetsov was on board undergoing a major overhaul.

The fire broke out around 7:00 PM local time in St. Petersburg on Nov. 27, 2018. By approximately 9:00 PM, the fire reportedly spread to two of the ship's five decks and covered a total area of more than 3,000 square feet, according to a statement from the Russian Ministry for Emergency Situations. The fire eventually spread to another deck. Some 15 fire trucks and more than 75 firefighters were on scene battling the blaze. Unconfirmed reports say that a short circuit started the fire and led to the initial injuries.

The diesel-electric Viktor Chernomyrdin has already been something of a debacle for the Russian government. Construction first began in 2012 and the ship was supposed to enter service in 2015. Problems with the design subsequently left the project over budget and behind schedule.

In 2017, Russia's state-owned United Shipbuilding Corporation (USC) moved the unfinished ship to the Admiralty Shipyard, better known for building warships and submarines, with the hope of speeding up its completion and getting it into service by the end of 2018. This fire could easily push that timeline back again.

It's another embarrassing development for Russia's beleaguered shipyards and shipbuilding enterprises, which have seen serve high-profile accidents in 2018. In October 2018, the PD-50 dry dock, the largest in Russian inventory, sunk, leaving USC without any readily available alternatives to service the country's lone aircraft carrier, the Admiral Kuznetsov. That accident could also severely hamper the ability of the Russian Navy to conduct major repairs on other large ships and submarines in the future.

The fire onboard Chernomyrdin is also only one of a number of similar mishaps that Russian ships have sustained in 2018, as well. The first of these was a blaze that broke out at Russia's naval base in Vladivostok in the country's Far East region in January 2018. In February 2018, the destroyer Marshal Shaposhnikov also caught fire in Vladivostok while undergoing repairs.