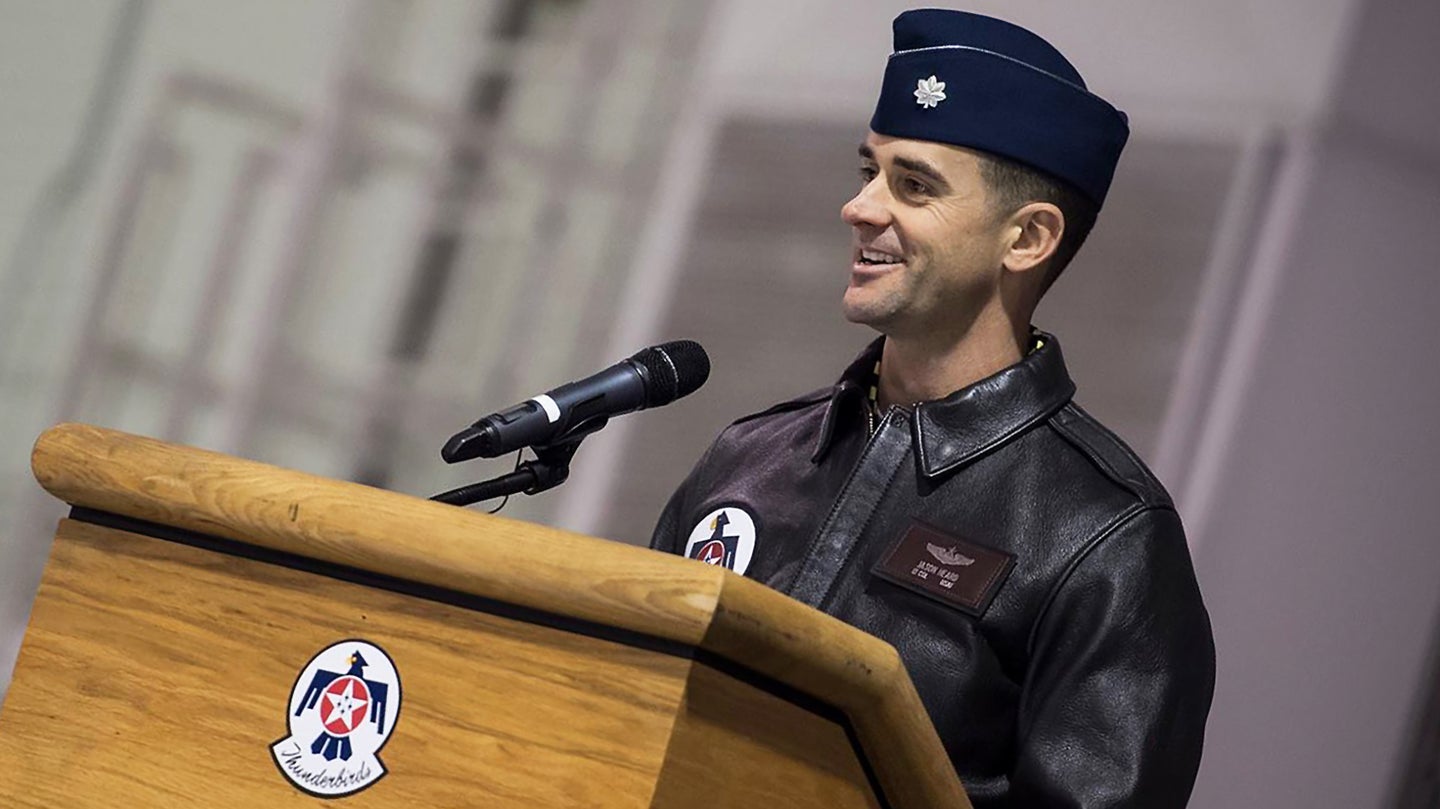 A new report by Air Force Times' Stephen Losey adds some much-needed color to the abrupt removal of Lt. Col. Jason Heard, the commander of the USAF Flight Demonstration Team, aka The Thunderbirds, a year ago. Not only was a physical altercation with another pilot at the heart of that decision, but a pattern of risk-taking and needlessly dangerous behavior also was a factor.

Losey reports that the altercation in question occurred at an Irish pub located at National Harbor, Maryland on September 11th, 2017, a day after executing a delta formation flyover of the Redskins season opener at FedEx Field. The report, which Losey obtained via the Freedom Of Information Act, noted that multiple witnesses testified the Thunderbirds formation flew well below the minimum regulated altitude for a flyover of a populated area during that display.

Before that, Heard, who was an F-15E Weapon Systems Officer turned Strike Eagle pilot, had repeatedly decided to break the rules while his teammates were flying just feet away from his aircraft. This included taking the diamond formation supersonic during a transit flight to the Royal International Air Tattoo in the UK back in July of 2017. Heard also attempted a loop on takeoff at an airshow in Boise even though weather conditions were below the minimums allowed for the maneuver.

These types of acts, which made some pilots in the team think he was going to kill them, and a generally hostile and risk-taking management style led to tensions with those directly under his command to boil over at the Maryland bar on September 11th.

"Seven witnesses observed the altercation, the report said, and “witness testimony was consistent that Lt. Col. Heard placed his hands around [the unnamed pilot’s] neck.” Witnesses told investigators that both Heard and the other pilot had consumed alcohol that evening. One of the witnesses, who was closest to the two, intervened and broke it up, the report said."

Ironically, Heard stated the following when he was selected to head the Thunderbirds in November of 2016:

“To me, service as a Thunderbird is both an honor and a privilege... It requires significant sacrifice rewarded by the trust our fellow airmen place in us to represent them to the public. I promise to provide adaptive leadership, maintain the standards and fly a safe show.”

Clearly, that was a hollow declaration considering what we know now.

It remains unclear what exactly happened to Heard after being pulled from the Thunderbirds roster, but based on these revelations, doing so seems now like a far more essential move than it did at the time. All we really knew then was that he had lost the trust of his team and that his focus on safety—or lack thereof—was an issue.

Trust is everything in an elite aerobatic demonstration squadron environment. The CO literally flies with the other pilots in the formation's lives in his hands. Still, it's not like this is the first time someone in such a demanding position hasn't worked out. But in this case, Heard got pulled for the very worst reasons, not because the unique type of flying just wasn't a good fit—even the best fleet pilots can have issues with the very tight and precise formation flying the demo demands—or due to external, personal circumstances. Instead, he was selectively unsafe and fostered an adversarial work environment for his teammates.

Make sure to read Losey's entire report on the matter, linked here once again, for all the details.