These drills are important for combat units to train for high-tempo operations and it's a key milestone for the Joint Strike Fighter. 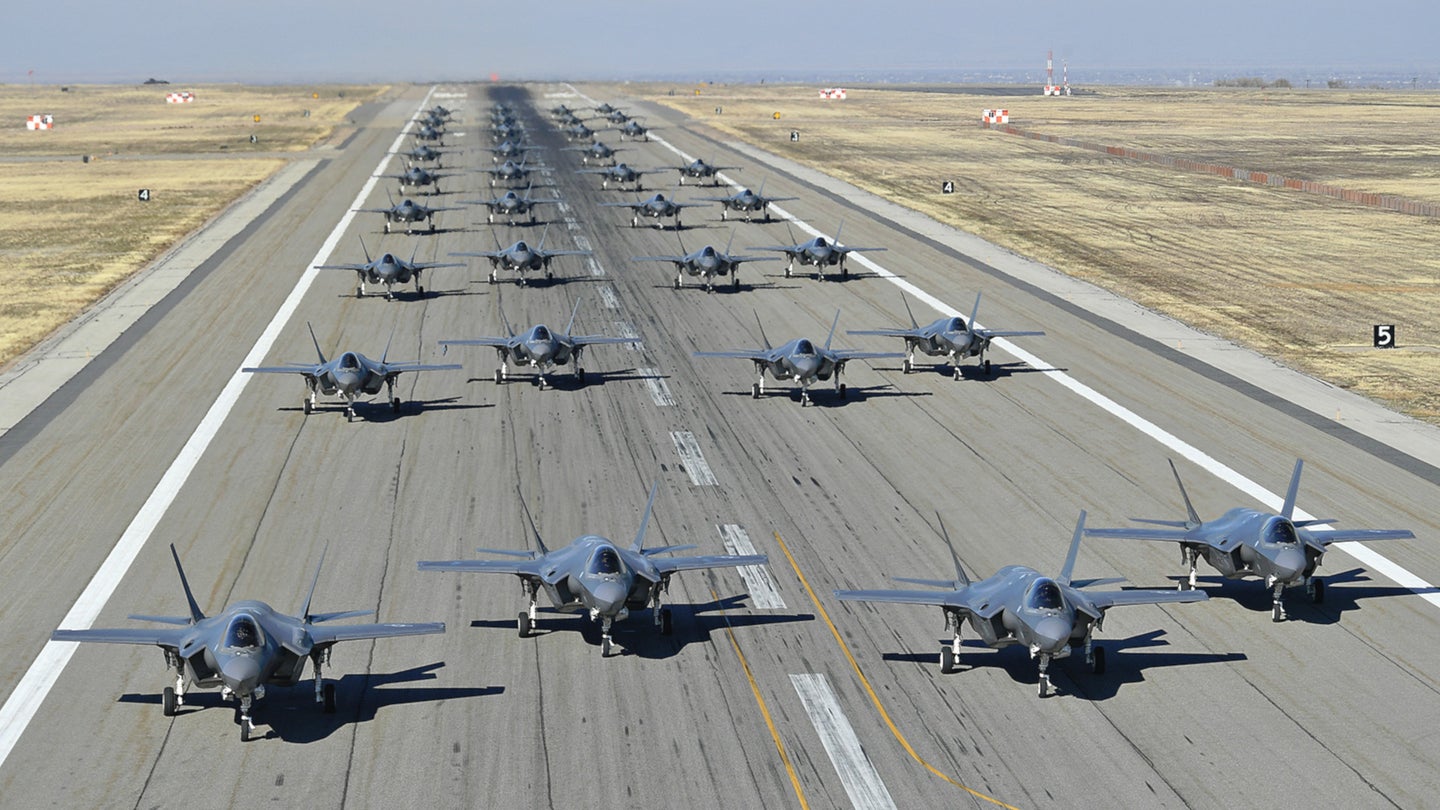 Personnel from the U.S. Air Force's 388th and 419th Fighter Wings, both equipped with the F-35A Joint Strike Fighter and based at Hill Air Force Base in Utah, staged the first-ever "Elephant Walk" combat power exercise involving the stealth fighters on Nov. 19, 2018. These drills test units' abilities to generate as many sorties as possible in a 24-hour period, something they might have to do during a surge in combat operations. It's not clear whether it was intentional or not, but for this debut event, the two wings sent a seemingly symbolic 35 jets onto the runway.

These exercises, also known as short-notice combat readiness drills, typically occur at bases overseas and at major hubs in the United States, such as Hill. They can include all sorts of different aircraft, as well as helicopters, and even non-combat types on certain rare occasions.

“We are ready to fight tonight, and exercising with multiple squadrons of F-35s can demonstrate our ability to defeat potential adversaries wherever they may arise,” U.S. Air Force Major Caleb Guthmann, the Assistance Director of Operations within the 34th Fighter Squadron, part of the 388th, and lead officer for the exercise said in a statement. A normal day, Hill's Joint Strike Fighters fly approximately 30 to 60 sorties, according to the Air Force.

During the Elephant Walk, the 388th and the 419th, the latter of which is an Air Force Reserve unit, launched a similar amount of aircraft, but in 20-to-40 second intervals. It's worth noting that we have no confirmation as to how many aircraft actually took to the sky as part of this exercise. Taxing onto a runway is different than flying an actual sortie.

The drill also comes as the three U.S. services who operate F-35 variants – the Air Force, Navy, and Marines – are struggling to improve their availability rates across the Joint Strike Fighter fleet and have suffered a number of high-profile accidents and groundings in the past four months. In October 2018, Secretary of Defense James Mattis ordered the services to ensure that 80 percent of all F-35s, as well as other types of fighter jets, are fully mission capable at any one time by the end of 2019.

That goal is extremely ambitious as legacy aircraft, such as the F-15 and F-16, usually have a mission capable rate in the 70 to 80 percent range, meanwhile, the force's newest and most advanced fighters, like the F-22 and F-35, have struggled to come even close to their decades-old stablemates, with sub-60 percent mission capable rates plaguing the fleets.

So, for the Air Force, the Elephant walk likely carries the additional importance of sending signals within the U.S. military and to its critics that it is also making progress improving the readiness of its F-35 units and is ready to send those pilots and their aircraft down range, if necessary. In October 2018, the 388th and 419th together hit 10,000 total fight hours with their F-35s.

The 34th Fighter Squadron, specifically, became the first operational squadron when the Air Force declared it had reached initial operational capability with the Joint Strike Fighter in 2016. It was also the first combat-coded Air Force F-35A unit to receive the Block 3F software, which gave the aircraft the ability to employ all of the presently certified weapons for the jet, including its 25mm internal cannon in 2017. It brought those capabilities to Japan later that year in its first operational deployment overseas.

Now the 34th, along with is sister unit the 4th Fighter Squadron, together with the 419th Fighter Wing's the 466th Fighter Squadron, have now taken another step in demonstrating the Air Force's ability to conduct, real, high-tempo operations with the Joint Strike Fighter if required in the future.

All 35 of the F-35s that took part in the drill did successfully take off, Lockheed Martin has informed The War Zone in a statement.