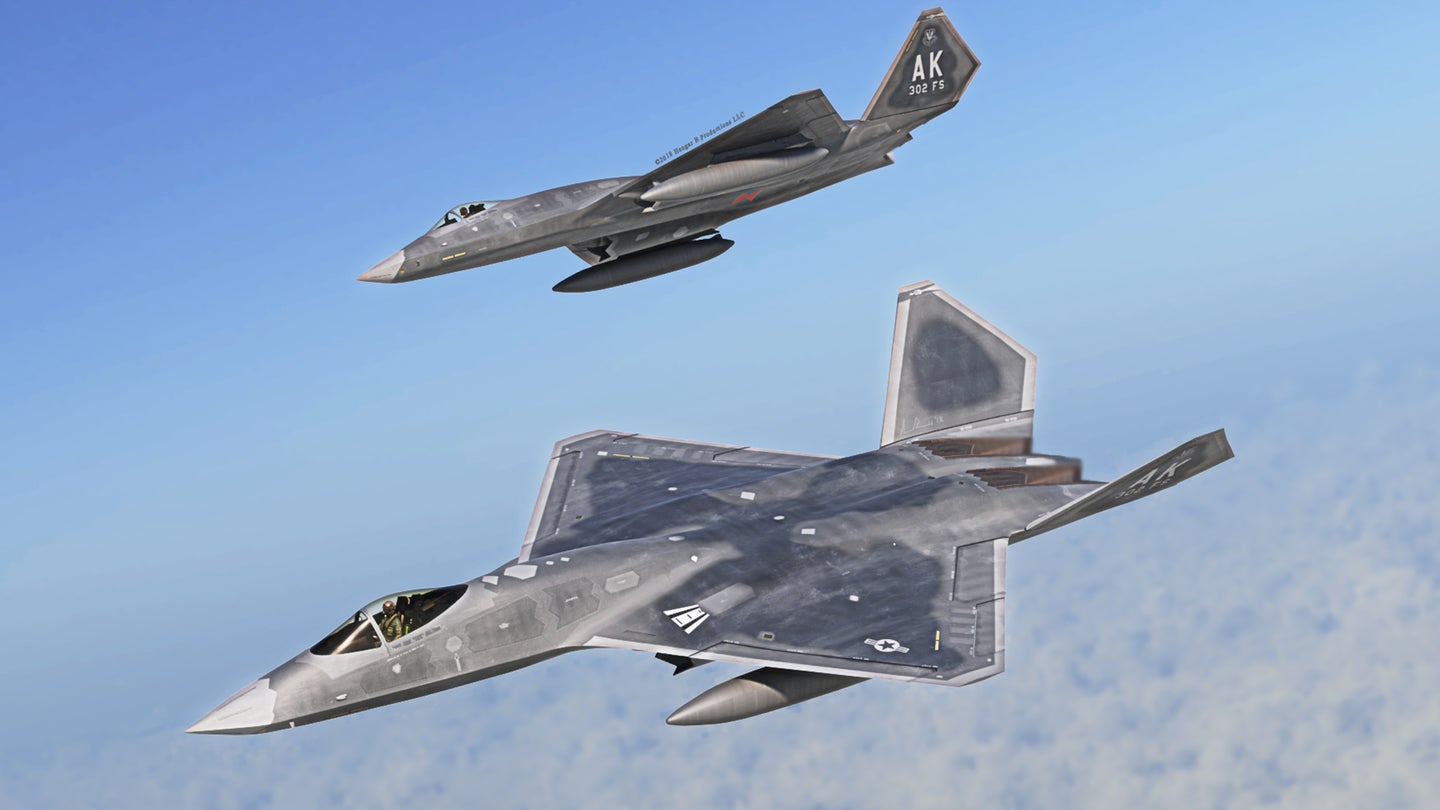 Northrop's entrant into the Advanced Tactical Fighter competition, the YF-23, has become one of the most enigmatic and misunderstood flying machines of the jet fighter age. Today, many are quick to proclaim that it deserved to win against Lockheed's YF-22. That is certainly debatable, especially considering the aircraft's unique attributes in relation to the realities of air combat today and the fact that YF-23 checked every box on the USAF's rubric just like its competitor. Yet one of the questions I get asked the most is what would an F-23A have looked like? The F-22A changed significantly in form from its YF-22 technology demonstrator progenitor and the truth is Northrop's offering would have as well.

They say a picture is worth a thousand words. With that in mind we set out to leverage an array of sources, including the actual blueprints for the proposed pre-production F-23A, and were able to bring the super fighter that could have been to life nearly three decades after it was passed over by the USAF.

In this very special installment in our ongoing YF-23 series, we worked with our favorite aerospace artist, Adam Burch of Hangar-B Productions, to show the world exactly what the F-23A would of, or at least could have been. This has been in the works for over five months and it was well worth the wait.

The process to create these renderings was painstaking, to say the least. Every detail available was pored over to give birth to the most accurate portrayal anywhere of what this aircraft would have looked like. Late night email exchanges between us were down to single degree cants of the engine nacelles and individual markings on the on the jet's wings, but mostly I watched as this thing came to life, in awe of Adam's uncanny ability to make something of a nerd dream of mine materialize. I knew he could do it like nobody else as he already brought Boeing's F-32 to life in a number of amazingly accurate renderings we shared last Spring.

I cannot thank him enough for all his time and effort on this project. It's rare you work with someone who loves what they do so much and has the talent to really make something magical happen out of thin air.

Once again, this is not fan art from the imagination, this is a realization of the real thing as it was going to be. Only the smallest details where specific information wasn't available were filled in with care. So without further adieu, behold, Northrop's masterpiece that wasn't, the F-23A 'Black Widow II':

You will notice that the F-23A would have been longer and more smoothly molded than the prototype technology demonstrator that came before it. The YF-23's big trapezoidal nacelles would become more blended into the F-23's fuselage and its engines would be spaced closer together at slightly toed-in angles. Without the requirements for thrust reversers, which was baked into the YF-23 design but the hardware was never fitted, a more efficient low-observable flap-nozzle could be installed and the flat exhaust troughs would get updated heat-resistant coverings.

The F-23's nose would be redefined to accommodate a powerful active electronically scanned array (AESA) radar and its intakes would be drastically changed. Gone was the innovative but high-risk 'gauzing panels' that worked to separate turbulent boundary layer air from entering serpentine intakes. In their place was a diverterless supersonic intake-like configuration similar to what is seen today on the F-35 and J-20, among other aircraft. The intake leading edges would be serrated as well, giving them a menacing look and enhanced low-observable properties.

The F-23's boat-tail would also be simplified, with a simpler overall 'w' shape, with the additional indentures found on its YF-23 predecessor deleted. The F-23A's weapons capacity was expanded and offered more relevant weapons storage than the single bay found on the YF-23. The bays were arranged to carry a pair of AIM-9 Sidewinders in the front bay and four to five AIM-120s in the rear bay. Air-to-ground munitions could also be carried, including much larger weapons than what the F-22 is capable of carrying today due to the greater depth of the F-23's rear weapons bay.

The refueling port would be moved over from the aircraft's centerline to its left over-wing shoulder position, offering pilots a similar tanking 'picture' as the F-15 Eagle. The landing gear would also be strengthened and the ventral barrel section would feature a less acute and more blended mold-line.

Beyond being more refined, the F-23A is a narrower and somewhat elongated design iteration of the YF-23, which would have likely helped improved its already blistering kinematic performance and excellent radar cross-section metrics. But still, as you can see in the scaled illustrations below, the F-23 was to be a beast of a fighter that was overall larger than the F-22 Raptor—the aircraft that became the end result of ATF competition.

Even more eye-opening is the F-23 when viewed comparatively to its unofficial namesake, the P-61 Black Widow. Northrop's legendary night fighter-interceptor of World War II isn't considered small by any means, quite the opposite, but it's absolutely dwarfed by the F-23.

Here are some thoughts from Adam Burch on his experience raising the F-23A from the dead:

"The F-23A model was the result of long hours of research, supposition, dead ends, frustration, fits, starts, and restarts. Above all else, in bringing the 'Black Widow II' to life, I drew on my own experience as a professional aerospace engineer, amateur historian, middling pilot, and terrible meteorologist to produce something I hope will do her designers, engineers, maintainers, and pilots proud.

I attempted to remain faithful to the reference material wherever possible before succumbing to creativity and shamelessly lifting design cues from production aircraft, such as the F-22A. As with all 'what if' projects, there are many questions regarding small details about the final design that may never be answered and that is just fine with this artist!

If you're interested in more of my work you can find it at www.hangar-b.com. I look forward to working closely with The War Zone team in the future to bring more depictions of the musty and unexplored corners of aerospace history to life."

A huge thanks to Adam Burch for showing us what could have been by bringing the F-23A to life in these wonderful images. Make sure to follow Hangar-B Productions on Twitter and Facebook and stay tuned for more installments in our ongoing YF-23 series as we explore this fascinating aircraft and its unique albeit short-lived story in new and exciting ways.