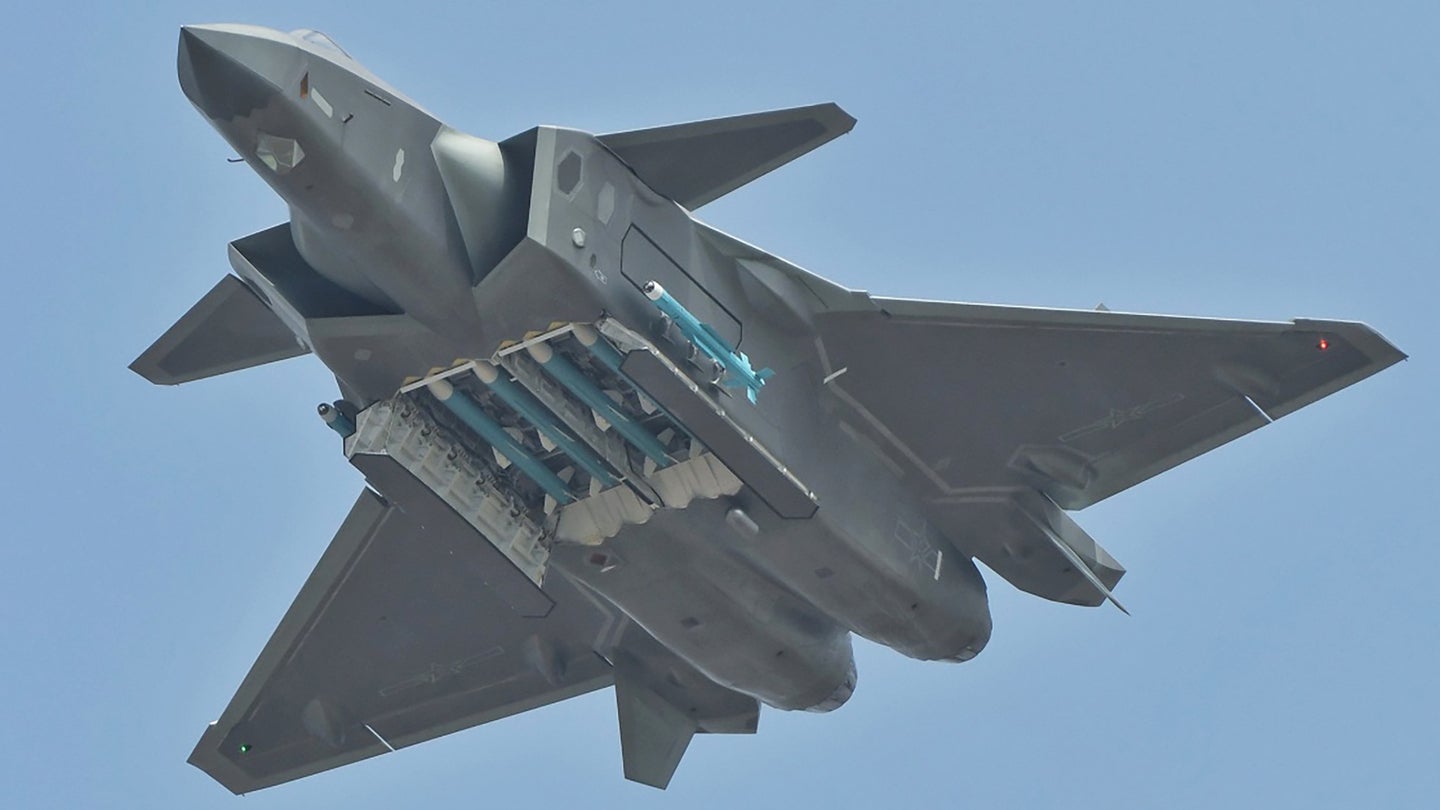 On the last day of China's biennial air show and weapons expo in Zhuhai, a pair of the country's J-20 heavy stealth fighters added a surprise twist to their routine—they popped open their weapons bays and showed off full magazines of missiles. This is the first time such a full load of weapons has been fully exposed and the first time China has officially shown off the jet's complete internal weapons configuration in the flesh.

What we see isn't necessarily surprising, but it is interesting nonetheless. In the main ventral bays, the J-20 is carrying four PL-15 medium-to-long-range air-to-air missiles. The type is somewhat analogous to the American AIM-120D AMRAAM. Speculation about what missile actually would hold the PL-15 designation has bounced around a lot, with very long-range missiles and those fitted with throttleable ramjets also potentially receiving the designation, but now it seems the PL-15 is indeed a dual-pulse motor and AESA equipped missile with a similar profile as its predecessor PL-12. The PL-12 is loosely analogous to the AIM-120A/B.

Note that even with their clipped fins, only four PL-15s are mounted in the J-20's bays in a similar fashion to the YF-22's missile configuration. It isn't clear exactly what the launch mechanism for these missiles is based on these photos. A staggered arrangement with six PL-15s may be possible in the future by the looks of the bays, but this depends a lot on the how the missiles are ejected from the bay itself. The F-22 uses a trapeze launcher system to chuck the missiles clear of the bay. The J-20's main weapons bays also look remarkably uncluttered, which makes one wonder if the missiles are just mounted to static hardpoints inside, but this is doubtful as what appear to be launchers have been visible in the J-20s bays for years.

The most interesting part of this display of the J-20's lethal payload carrying abilities is the pair of PL-10s deployed on the outside of the jet's side weapons bays. This novel configuration is one of the most fascinating aspects of the J-20's design. I was one of the first to point it out and explain its utility back in early 2013, when I wrote the following:

"The F-22, a very loose analog for the J-20 (emphasize very), uses a canted trapeze that pushes the AIM-9’s seeker out into the air-stream for proper establishment of a lock before launch once the bay doors are swung open. Only once the missile has acquired a target and the pilot 'receives tone' (the AIM-9 series has an audible growl as it hunts for a heat source, once it finds one it goes from an intermittent growling sound to a solid tone, cueing the pilot to fire) the missile can be fired and only then do the launch bay doors close up.

This method increases the F-22’s radar signature dramatically while also disturbing the airflow around the jet which makes for lower performance and a rougher ride during close-in air combat maneuvering, or dogfighting. Soon, the F-22 will have the AIM-9X Block II which features lock-on after launch data-link capability. In other words, the pilot can 'acquire' a target via his or hers onboard sensors, including the hopefully forthcoming Scorpion helmet mounted display... Once the target is 'virtually locked' within the AIM-9X Block II’s engagement envelope the pilot can quickly fire the Sidewinder, with the bay doors opening and closing momentarily, and allow the data-link to transfer the acquiring secondary sensor’s info to the missile after it has left the bay in the form of a vector [to the target]. The missile will fly in this prescribed direction so that it can acquire the target itself, at which point the AIM-9X Block II becomes truly 'fire and forget.'

Once the AIM-9X Block II is integrated into the Raptor, and especially once the helmet mounted display is operational, the F-22’s side bay doors only have to briefly open to let the AIM-9X on its one-way mission. All this begs the question: If China loves copying the US when it comes to weapons systems, why not just build something similar for the J-20 when it comes to deploying its short-range air-to-air missiles?

The answer is quite simple, lock-on after launch capability is not an easy one to achieve. It is technologically complex, requires deep systems integration (software architecture permitting), and robust testing using live missiles, and thus it is expensive. China, being the resourceful and cunning folks that they are, figured out a way to employ any new or relatively archaic high-off-bore-sight short ranged air to air missile while keeping the jet’s aerodynamics relatively intact (doors closed during prolonged maneuvering while the missile hangs out on its rail) while also minimizing the impact a 'deployed missile' has the J-20’s low radar cross-section.

That is right folks, China just said "we don’t want to have to rely on LOAL capability, so why not just temporarily (as in for seconds or minutes) mount a similarly agile, but much less complex and expensive, short ranged air-to-air missile outside of the bay during times when close range combat is imminent?”

This is exactly what they did, and honestly, I think it is genius. Radar signature becomes a small factor when fighting for one’s life at close range, having a reliable missile ready to make a u-turn off the rail and subsequently turn your enemy into chaff is so important that is can be seen as a life and death requirement [especially for a big, not remarkably maneuverable fighter]. The alternative, such as the reality the F-22 has faced for the better part of a decade, is that you open the bay up for prolonged periods of time and pay a large penalty in radar cross section and [some] performance. Also, by building a relatively simple contraption, kind of similar to one of those bars that goes on your lap on a roller coaster, albeit with a missile attached, Chinese engineers simplified the launch system and also probably made it much lighter than an F-22 type design. Once again, genius.

Another point to be taken from the J-20’s short-range air-to-air missile launch mechanism revelations are that designers absolutely thought it was necessary to give this jet high-off-bore-sight close range missile capability from day one, and in a reliable and persistent nature when needed. This could be due to lack of maneuverability and/or because of its mission, which I have said for years is to break through the enemy’s (American, Taiwanese etc.) fighter cover and take out their enablers (see tankers, AEW&C, C2 and connectivity nodes). In such a case, being electronically silent is your best bet at surviving, so using infra-red passively guided missiles, which require no electronic emissions, at medium-close ranges may be your only play, at least for anything that does not put out a continuous or semi-continuous form of radiation (see AWACS or JSTARS). In that case, a passively guided anti-radiation missile may be the J-20’s weapon of choice, or a medium-long range AAM that can get within locking distance and featuring active radar or IR for terminal homing, via a traditional data-link feeding the J-20’s targeting picture to it provided by passive sensors (IRST, ESM etc).

Here's a cool little animation of how this system works.

Something I would like to emphasize from my original analysis is that the PL-10 that is fired from these side bays is something of a short-to-intermediate range air-to-air missile. This means that in addition to the missile being capable of high-off-boresight shots that are cued via the J-20's helmet-mounted display or other sensors during a dogfight, it is also capable of near beyond-visual-range engagements as well.

Able to reach out over a dozen miles or so (possibly substantially farther according to different assessments), this missile, combined with its ability to ride outside of the J-20's side-bays, can be used as a silent assassin of sorts. The J-20 can leverage its stealth and sneak up on targets without emitting any electromagnetic energy, using just its advanced passive avionics, which includes electronic surveillance measures, infrared search and track and electro-optical targeting systems, and third-party sensor data fed to it via data-link, to locate its prey.

In other words, the J-20 can take advantage of the PL-10 when maximum emissions control tactics are used or when it has snuck up on its target and gets within close, but not yet short-range. Using these methods, the J-20 pilot can also use the PL-10 for offensive tasks when its longer-range missiles are expended. Considering the jet only carries four long-range missiles, at least at this time, being able to wield the PL-10 to its maximum potential is key. Once again, this is in addition to using the missile in classic close-range dogfighting scenarios.

Finally, an infrared-guided missile with decent range like this and the ability to hang outside the bay for prolonged periods of time is also a good fallback when fighting in heavy electronic warfare environments as the missile's imaging infrared seeker is not impacted by electronic warfare tactics.

As for the rest of the J-20's air show display, it looks pretty much exactly as what one would expect from a big, canard-equipped heavy fighter-interceptor that doesn't possess gobs of excess power. It can roll fairly fast and it can change direction quickly and point its nose decently, but it bleeds energy very fast and energy recovery is likely slow. But extreme agility wasn't the motivation idea behind this design, so that isn't surprising. With uprated engines, it will only get more capable in this regard, though.

At the air show, the J-20's designer even teased that the thrust vectoring tech that is now being tested on a modified J-10B, a jet that flew at the show as well, may find itself on the J-20, or maybe it has even already been tested. Equipping the J-20 with thrust vectoring now seems counterproductive as it adds weight to an aircraft that is already in need of more powerful engines. But as time goes on, and as new powerplants are fitted, the weight issue may not be so pressing.

Still, the added capability of thrust vectoring is debatable, but as the J-20's designer stated, it could reduce the J-20's canard deflections during flight. Fluttering flight control surfaces are not good for a stealthy aircraft's radar cross-section. This is an issue I have discussed in depth before and one of the biggest knocks against the J-20's delta-canard design which puts those surfaces—two huge ones in fact—up front where a stealthy aircraft's radar cross section is most sensitive and important to its survival. So maybe that alone is enough to justify migrating thrust vectoring tech to the J-20.

China did do something else pretty unique at Zhuhai 2018 in that it appears that they devised a way to allow a J-10 to 'torch.' Of course, this operation was made famous by the F-111, andAustralia's 'Pigs' in particular. The maneuver, which included dumping fuel and lighting it on fire with the jet's afterburners, was forbidden in the U.S., at least in the latter years of the F-111's reign, so it is a bit funny that China seems to have gone out of their way to pull something similar off. It appears as if this ability uses the August 1st Display Team's smoke oil injector to function. It could also be a malfunction of that system, but I doubt that's the case. Either way, it's cool to see a fighter in China torching it up!