A new mobile howitzer would give the service's light, rapidly deployable units an important, organic boost in stand-off firepower. 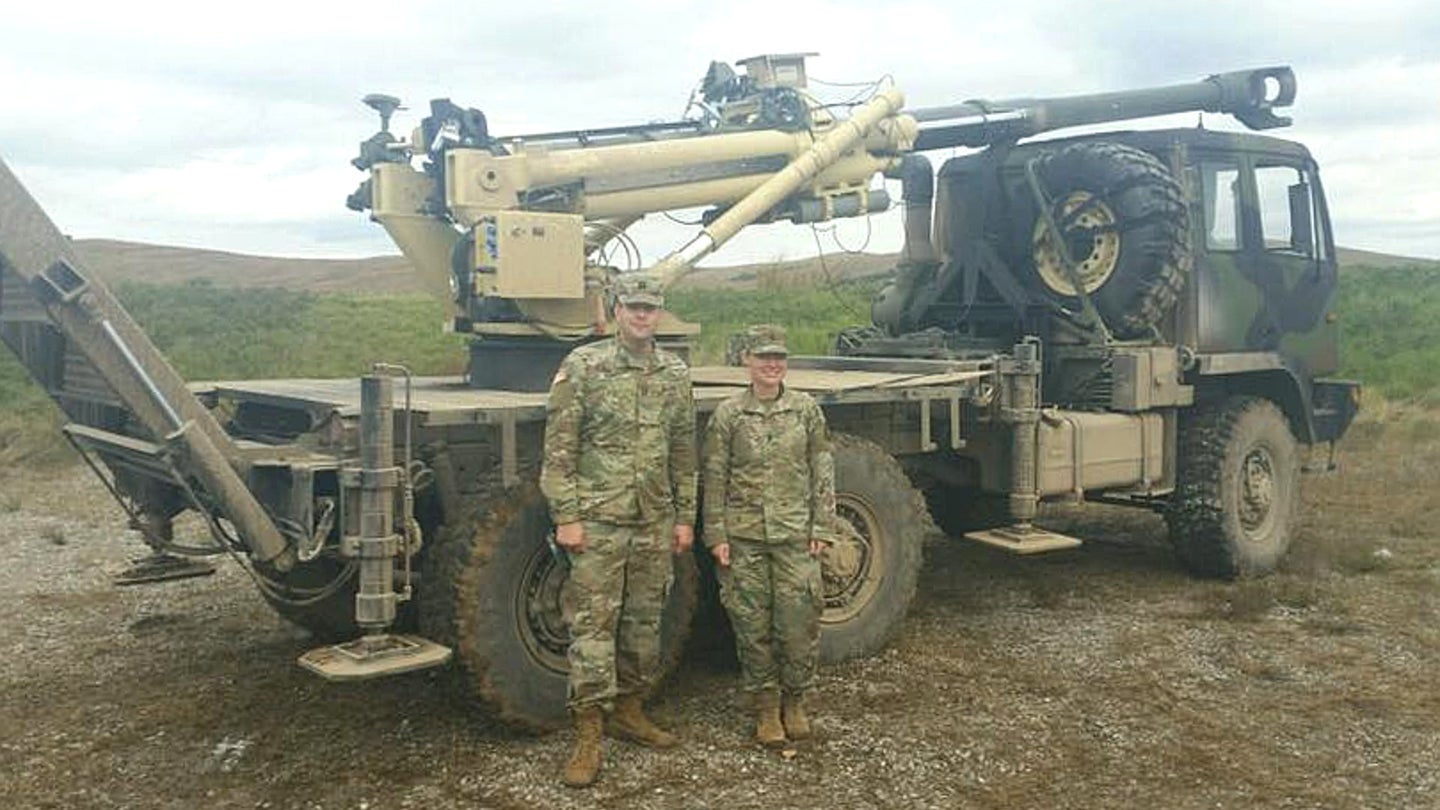 The U.S. Army has revealed that it has been testing a truck-mounted, low-recoil 155mm howitzer at Fort Sill in Oklahoma. The new weapon would meet the service’s requirements for a lighter weight and mobile option to replace existing howitzers in its Stryker armored vehicle-equipped, light infantry, and airborne units.

Defence Blog was one of the first to notice that the 75th Field Artillery Brigade had announced that its troops had fired the first round from the howitzer, nicknamed Brutus, during a recent Maneuver and Fires Integrated Experiment (MFIX) exercise at Fort Sill in a post on the unit’s official Facebook page dated Oct. 26, 2018. These routine drills have long provided an opportunity to evaluate other novel and advanced weapon systems, including ground-based electromagnetic railguns, directed energy weapons for shooting down small unmanned aircraft, and battlefield cyber warfare capabilities.

The post does not offer any details about the howitzer itself, but it is almost certainly Mandus Group’s 155mm Soft Recoil Howitzer, which has been in development since 2011. The company also offers a 105mm system called Hawkeye, which is based on the same basic operating principles and is small and low-recoil enough to fit on the back of a Humvee or a pickup truck.

In a traditional howitzer, crews load the shell and propelling charge into the weapon, fire it, and the barrel and breach assemblies move backward to absorb some of the resulting force. The rest of the recoil force goes into the firing platform, such as a truck or tracked vehicle, or into the ground more directly in the case of towed weapons. This produces significant strain on the entire system and generally precludes many lighter weight vehicles from carrying large howitzers due to the potential impacts on accuracy and dangers of severe wear and tear in a relatively short amount of time.

Mandus’ guns use what is known as a “forward-recoiling” or “fire-out-of-battery” operating mechanism. What this means is that when the crew fires the gun, the barrel and breach move forward first. In principle, this momentum helps further cancel out the recoil, making the gun more accurate and otherwise suitable for mounting on lighter vehicles. Digital ballistic targeting computers and precision-guided munitions would only improve the weapon’s accuracy even when fired from a lightweight platform.

The video below shows a test of Mandus' 105mm howitzer, which uses the same basic operating principle as its 155mm type.

The truck that the Army mounted “Brutus” on appears to be a modified M1083 five-ton FMTV type with outriggers to help stabilize it when firing. This would make sense since the FMTV series remains the standard tactical truck throughout the Army.

This isn't the first time the Army has looked into forward-recoiling howitzers. During the Cold War, the Army experimented with a gun using this principle, known as the XM204, which came in 105mm and 155mm variants. The weapons were lightweight and low-recoil enough for the service to even briefly consider a Rube Goldberg-esque contraption to strap two of the howitzers onto a CH-47C Chinook helicopter.

In the end, the complexities associated with the guns led to the XM204’s cancellation and the Army returned to developing more conventional howitzers. In February 2018, however, the service announced it was once again interested in exploring available options for a new mobile howitzer to replace its existing 105mm and 155mm towed types. A “ground up wheeled howitzer” was one of the concepts identified as being of “particular interest” in the contracting announcement.

At that time, we at The War Zone had noted that it seemed unlikely that a 105mm system would necessarily be able to provide the range and destructive capability to adequately replace 155mm howitzers, as well. This had pointed to the need to develop a new 155mm system that would be available in both short- and long-barrel variants and come in a package better suit the demands of different types of Army artillery units.

Mandus' soft-recoil system is ideal for meeting those requirements and the company already offers its 155mm design with two barrel length options. The Army’s experimental “Brutus” uses the shorter type.

Depending on just how lightweight the entire system is and how compact it can be made for transit, airdropping these truck-mounted weapons might be possible, which would further expand their flexibility. It could be light enough for a large helicopter, such as a CH-47F or CH-53E or K, to sling load from one destination to the other, too.

Using a relatively standard truck chassis, the vehicle best suited to moving on improved and semi-improved roadways, but the FMTV design does have some off-road capability. This is already the case with truck-towed howitzers now and truck-mounted systems also eliminate the inherent difficulties of towing anything over rough, uneven terrain.

There are potential limitations to Mandus' soft-recoil howitzer concept, though. The outriggers indicate that the 155mm weapon continues to put considerable strain on the FMTV chassis, which could lead to accuracy issues. It's also not clear whether crews would be able to safely fire the gun in any other position besides straight ahead, which allows the vehicle to help absorb the recoil of firing. This, in turn, could force them to have to take precious time to reposition the vehicle entirely in order to engage targets to either side.

We also don't know whether the forward-recoiling design can accommodate the propellant "supercharges" necessary to send shells out to extended ranges. This might lead to reduced maximum ranges even with the longer barrel variant when compared to traditional howitzers.

Still, it’s not surprising that the Army wants to see just what Brutus can do. As the U.S. military has reoriented itself toward preparing for potential high-end conflicts with near-peer adversaries, such as Russia and China, the service has seen a dramatic increase in interest in new and improved ground-based artillery capabilities across the board.

Land-based artillery systems are inherently more flexible and faster to respond than combat aircraft, unless the latter are already orbiting overhead. Depending on the situation, mobile artillery units may also be able to more rapidly maneuver or reposition themselves to provide critical fire support.

A lightweight truck-mounted howitzer would be particularly valuable capability during distributed operations, such as in the wide expanses of the Pacific Ocean, where ground forces rushing into an area, through airdrops or air landings, may not be able to rely on other units for support for an extended period of time. These same forces would be able to quickly deploy into an area to disrupt an opponent’s plans and deny them a particular vector of attack or quickly redeploy to avoid counterattacks using the added mobility of the self-propelled weapons over traditional towed howizters, as well.

The Army’s contracting notice from February 2018 says that the service is interested in acquiring new howitzers sometime in the mid-2020s and that it is looking to avoid an “extended development cycle.” With Mandus’ lightweight 155mm design already in the works for the better part of a decade and with the company’s extensive testing of its 105mm type, this would seem to be a particularly attractive option in meeting the demands of this schedule. It seems almost certain that the U.S. Marine Corps will be interested in this development, as well, given their own desire for more mobile artillery capabilities.

Hopefully, we will learn more about Brutus’ performance at the MIFX exercise soon. If the system works as advertised, it could offer a major boost in artillery capabilities for the Army's lighter, more rapidly deployable forces.