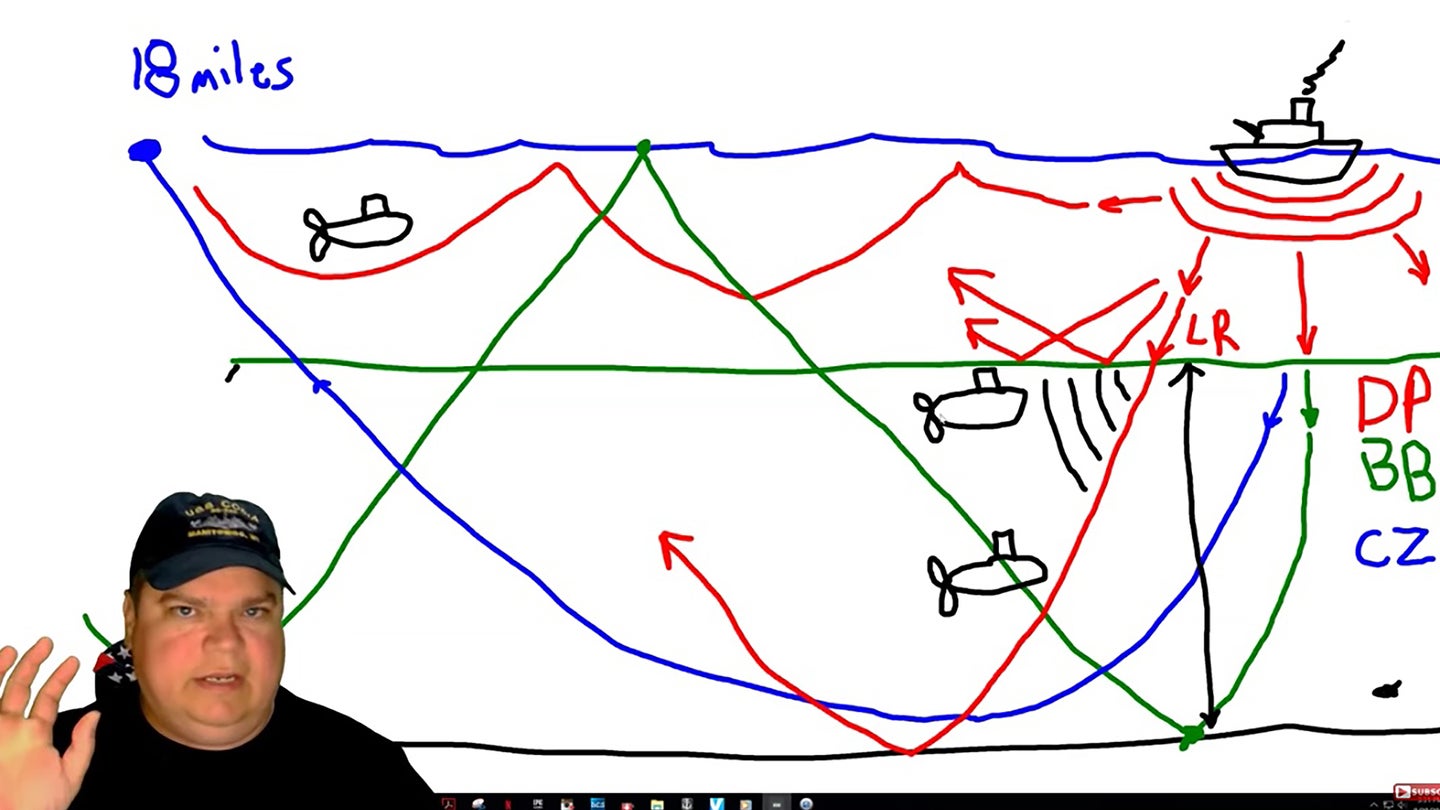 When it comes to conveying concepts even as fascinating but as complicated as how to use layer depth to evade enemy sonar, eyes can glaze over very quickly and attention spans can evaporate. Pretty much everything that has to do with the shadowy art of submarine warfare is either very complicated or ambiguous, but like anything else, a very good teacher can make a world of difference. One man, in particular—retired submariner Aaron 'Jive Turkey' Amick— is such a teacher and has deservingly found a dedicated audience in YouTube's potent gaming community. Beyond his gaming commentary, he has pulled out his whiteboard for viewers and has proven that the world of undersea combat and submarines isn't nearly as inaccessible as it seems.

Tackling subjects ranging from submarine to satellite communications to how high-tech steel leviathans of the deep deal with trash in a really down-to-earth and remarkably clear way has made his Youtube channel one of my favorites. Above all else, it provides a far more accessible explanation of the nuts and bolts of submarine warfare than pretty much anything I have seen in the past. On top of it, the primary game that Amick talks about, in addition to his explainer videos, relates right back to them and has captured my interest. The title is called Cold Waters and it looks like one impressive submarine combat simulator.

Just as we have down in the past when we have seen ex-military personnel hit YouTube to share their expertise and passion by way of video game tutorials and explanations, The War Zone reached out to the Hawaiian shirt-clad Jive Turkey to find out how he ended up creating such a unique channel, what his background is, and yes, how he got that nickname! But before we dive into that, here are a bunch of his must-watch videos:

Jive Turkey doesn't just talk about tactics and combat systems—in addition to his eclectic gaming focused fair—he also gives fantastic explanations of how submarines function, how their command structures are organized, and more, many of which are prompted by reader mail.

So who is the man behind the Jive Turkey moniker and these awesome videos? We found out in what turned out to be a particularly awesome Q&A:

Clearly, you have a Navy background, can you give us an idea of what this background is?

I joined the U.S. Navy in 1990. I spent a year going to submarine and sonar schools. During that time, the Navy was adding a lot of technical schools to the training pipeline and top students were moved into the next school instead of given orders to a sea command. This allowed me to move up from A school (basic sonar) to C school (advanced sonar) to multiple Maintenance Specialist schools just by keeping my grades up. By the time I got to my first submarine, I had attended most sonar schools the Navy had to offer.

My first submarine was a 688 Los Angeles class fast attack boat out of New London Submarine Base in Connecticut, the USS Philadelphia. I remember checking onboard that morning, the crew was very busy. Everyone was bustling around, loading supplies and food. We were going underway for a deployment in just a few days. The senior enlisted man, the Chief of the Boat, sat me down outside sonar during my check-in process and told me I was very lucky. We are going on the most important mission in his 20+ year career.

I spent the next 4 months underwater collecting intelligence that was used for the Daily White House Briefing in the aftermath of the fall of the Soviet Union. I was hooked on spying. I loved it.

I extended that sea tour as long as possible and conducted many intelligence gathering and training missions in the North Atlantic. The Navy never acknowledged our exact mission locations for good reason.

After about five years of that, it was time to rotate to another command. There was a new sonar system that was being installed on subs and I took advantage of my rotation date to get back into the training pipeline. I spent half of 1996 in classroom learning the AN/BQQ-5E sonar system operation and maintenance. The last half of that year was spent learning submarine warfare tactics and current intelligence on every major sea power in the world. This was the most difficult and intense learning I have ever experienced. It’s a lot of memorization of hundreds of frequencies across dozens of platforms and weapons from over 30 countries. At night, we would take that knowledge and employ it in the Tactical Trainer—the most realistic submarine simulator ever built.

With five years at sea experience and one year of intense training, I went back to sea on the Ohio class nuclear ballistic missile submarine USS Maine out of Kings Bay Naval Base in Georgia. I did a full tour of hiding 24 D-5 Trident nuclear missiles in the Atlantic. There were a few occasions when Russia would send their Akulas down to look for us, but it’s a big ocean. We just avoided them.

After back-to-back sea duty tours, I thought I’d give shore duty a shot. I become an Instructor at King’s Bay Naval Base Trident Training Facility. I became a Master Training Specialist and taught in the tactical pipeline. I really enjoyed helping young sonarman become strong tactical advisors. Some of my students went to commands like the USS Jimmy Carter, which focus on Special Operations.

In 2003, we invaded Iraq again. This increased the demand on our base security that was supported by both the U.S. Navy and the Marine Corps. I volunteered to train with the Marines and assist in base security for a year. This was the most physically challenging time in my military career. By this time, I was over 30 years old and running obstacle courses and live fire exercises with Marines. It was great!

Eventually, the Navy wanted me back at sea, so I took another fast attack boat out of New London. On the USS Pittsburgh, I conducted missions in the North Atlantic and South Pacific. The fast-paced lifestyle of a submarine sailor hunting in the world's oceans came to a halt when my sub went into an extended drydock period. It was getting to the end of my career at this point and I didn’t want to spend it in a drydock. I requested a transfer.

The Navy recognized my ability to teach and put me on a Training Tiger Team for the latest sonar system, the AN/BQQ-10. I rounded out 20 years of submarine service by going to multiple sea commands training their Weapons Department on employment of the new sonar tools in the BQQ-10 suite.

How did you go from the shadowy world of undersea intelligence gathering and submarine warfare to creating awesome YouTube videos about it?

After the Navy, I finished my degree in Computer Network Engineering and got a job contracting for IBM in central Florida.

In the evening, I would record PC video games like Civilization V and post them to YouTube as a hobby. I had a very small audience of about 100 subscribers who regularly checked in to see what kind of shenanigans I was doing to alter 'world history.' In January of 2017, I resigned my day job and decided to focus on my YouTube channel full time. I began making videos regularly. But, my channel did not grow for five months and I was faced with the realization that maybe YouTube and online entertainment was not going to be my next career.

Cold Waters was released in June of 2017 and I bought a copy. It’s a Cold War era submarine game centered around the American 688 fast attack submarine. I decided to record some Cold Waters gameplay while narrating real-world employment tactics. My first Cold Waters video 'Greenland Sea Convoy Hunt' got over 200K views.

Then, fellow YouTuber and Navy man 'The Mighty Jingles' found my channel while looking for Cold Waters tutorials and told his 700K subscribers to check out my channel. I went from 100 subscribers to over 20K in about three weeks in June of 2017. That’s when my YouTube career began.

Tell us a bit about Cold Waters. Is the game fairly realistic? What makes it special?

Cold Waters is a real-time naval combat submarine simulator. It has realistic physics, ship models, weapons capabilities and dynamic underwater acoustic environments. While contacts are automatically gained and faded, the player is required to classify them manually and maneuver their submarine for target motion analysis. Cold Waters uses player’s maneuvers to realistically improve a contact solution. The player then makes tactical decisions based on what limited information they have gleaned.

You do such a fantastic job explaining very complex technical concepts in an accessible way. Where do you think that talent came from?

Complex systems are difficult for me to memorize, so I break it down into general blocks. That simplification helps me remember how things work. It has an additional benefit of also 'declassifying' a lot of the topics I discuss. The exact process of how we do just about anything on a nuclear submarine is classified at various levels. Some mundane tasks still have a ‘confidential’ restriction. But, by using my generalized, block step method to convey these tasks, I not only 'declassify' them, but it also makes them easy to understand.

What are five things people misunderstand or don't even know about submarine warfare?

1.) It’s boring. We search 24/7 diligently for weeks and months often without anything to show except our own wellbeing.

2.) Submariners do a lot of different jobs. I was a Sonarman by rate, but I was also responsible for a firefighting hose team, a dewatering team, weapons handling, equipment maintenance, sonar division personal requests, and providing division and weapons department training. It’s the most I have ever worked in my life.

3.) Submarine warfare is happening right now. There is a continuous effort by other nations to gain a tactical at sea advantage over our weapon platforms. The U.S. Navy works hard every day to prevent that.

4.) It’s slow. When a target comes within detection range, it often just fades in slowly from background noise over several minutes. The operators must be patient and always vigilant. A quiet watch can become the most important watch of your mission in an instant.

5.) It will change your perspective on the world.  The most intense time in my life was hunting another human in a submarine. Man is the ultimate target because he’s clever and expects you. I have no interest in wildlife hunting now because I’ve hunted at a level that doesn’t begin to compare.

How did you get the nickname Jive Turkey?

I went to Public School here in the backwater swamp of central Florida in the 1970s. I was one of the only white boys on the school bus and the driver would yell, "sit your Jive Turkey ass down!" when he had been drinking. So, the other kids called me Jive Turkey and the name stuck.

How can our readers follow your work and what's the best way for someone to get started in Cold Waters?

I would ask anyone who wants to support what I do to join my Patreon page as that is my primary source of income.

The best way to get started in Cold Waters is to watch my Tutorial playlist.

People can meet me at the November 10th, 2018 Anchors Away Anaheim event at the Esports Arena in Anaheim California. I’ll be doing a meet and greet and a celebrity World of Warships tournament. Tickets are available at Worldofwarships.com