The famous hangar was the site of a horrific tragedy and there have been persistent reports of ghostly phenomena ever since. 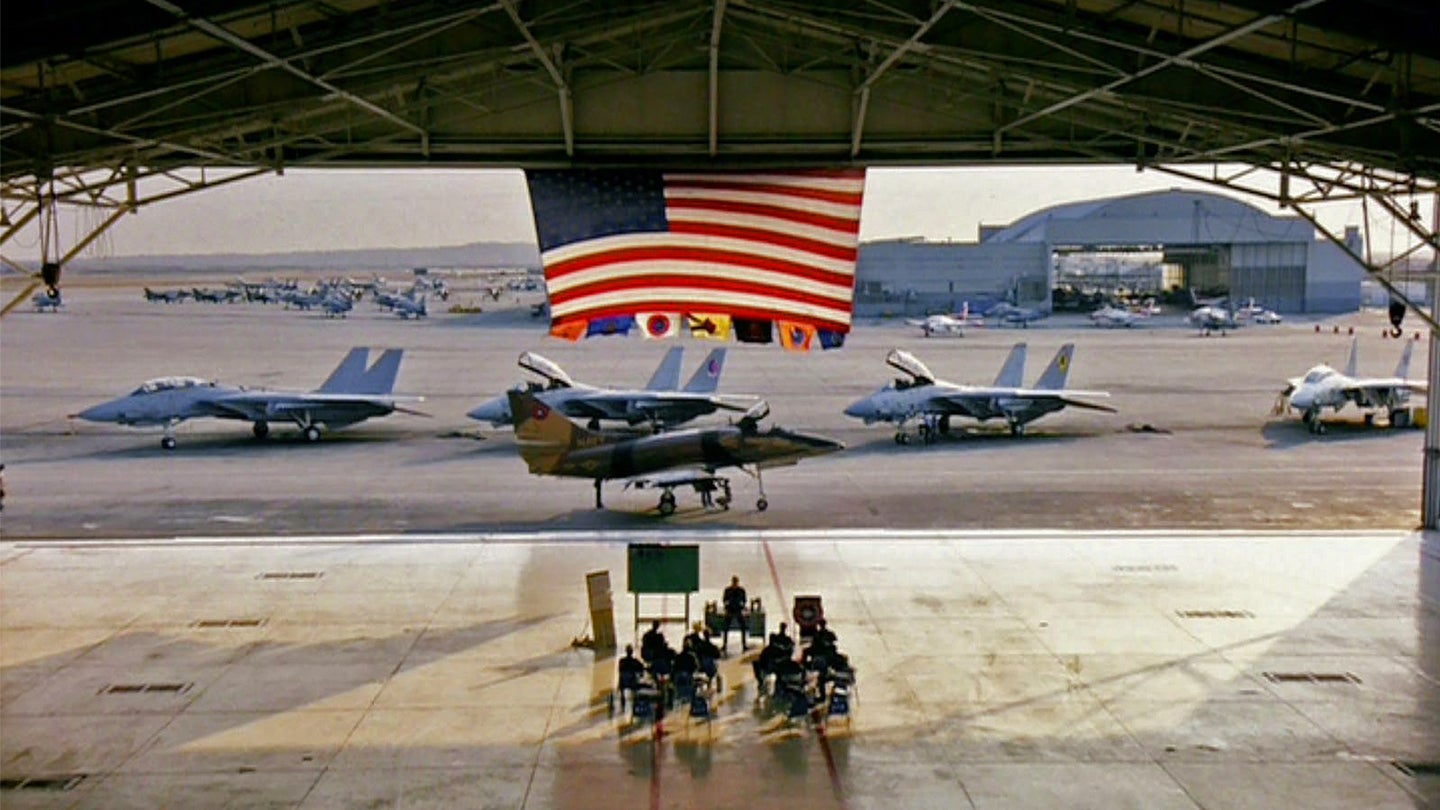 When it comes to haunted military installations, ships, and even airplanes, one place pops into my mind above all others. That place is Miramar's historic Hangar One that hosted the Navy Fighter Weapons School, better known as Topgun, for decades and was also featured in the cult classic flick by the same name.

There are plenty of recollections of Hangar One being haunted floating around. I stumbled upon this lore by happenstance way back in mid-1990s when I spent time at the base, then known proudly as 'Fightertown USA,' as a teenager thanks to a friend of the family. This included some extended time in the F-14A simulator, which was a real highlight to this very day. When we were in VF-101's hangars, which were situated across from the group of hangars that supported the adversary program and Topgun, some sailors were swapping a Tomcat's engine and mentioned that they would be there till late that night. The other sailor replied something like, "rather here than in Hangar One, late nights there were creepy as hell!" I asked the high-time Tomcat instructor that was hosting me what the deal was and he said the place is notorious for being haunted.

As the years have passed, that stuck with me and I have asked other Topgun personnel about the haunting. Some had personal experiences usually surrounding the labyrinth of offices that are arranged above the hangar bay. One even heard a massive crash and screams while working late in one of the bays, only to find the place peaceful and empty.

The hangar definitely has seen a lot of history. Here's how Paul Nickell, who was a student at Topgun and an instructor back in the 1980s, described the place in our exclusive series on taming the Tomcat and flying for the elite Navy Fighter Weapons School:

"I think it was the second oldest hangar at Miramar, but it was designated Hangar One. It sat at the east end of Runway 24 Right, just to the north of the hold short line. Most likely built in the 1950s, it wasn’t there in the early 1940s when my dad was stationed at then Camp Kearny as a B-24 radioman. It had survived a flamed out pilotless F-8 Crusader crashing into it in December of 1969, a tragedy that took 14 lives.

Across the north side of the hangar, facing the road, in huge deep-blue block letters was the word “TOPGUN."  At the time, Topgun was not a household word. The average American had no idea what it was, but that would change soon. After parking in the lot across the street, we walked past a couple of large dumpsters on the side of the parking lot entrance, crossed the street, climbed a few steps and returned a salute from the gate guard. About 50 feet away, in the northeast corner of the hanger, was a single width blue metal door. Above the door was a white metal sign screwed to the corrugated grey metal siding which read “WELCOME TO NAVY FIGHTER WEAPONS SCHOOL” in black stenciled letters. In the center of the sign was a large sticker of the Topgun emblem.

Entering the door, we were in a stairwell that went halfway up and then switched back to complete the journey to the second level. The walls of the stairwell were painted gloss white and were covered with neatly spaced red silhouettes of MiG aircraft kills from Vietnam.  Below each were the aircrew names and the date of the kill. Additionally, there were two recent silhouettes from Libya.

At the top of the stairs, we turned left and started down a hallway. The right side was solid and was the exterior wall of the hangar. There was one opening on the right, about the size of a double door, with an accordion metal contraption across it so that no one would accidentally walk out the opening and fall 20 feet to the ramp below. The remainder of the wall was covered with a small group of pictures of the current Topgun staff and plaques. There were several rows of plaques that ran the length of the hallway, probably 100 yards or more. Each plaque was a gift from a crew that had attended training at Topgun, and each had a unique story behind it. There were literally hundreds of them.

Down the left side of the hallway were the squadron spaces. The CO and XO offices were first with a secretary in front. There was a small ready room where the Squadron Duty Officer sat during flight ops. There were several small groups of briefing and debriefing rooms, along with two relatively large classrooms. Beyond that was the operations office and the training office. We were directed into Classroom One which was walled with 4X8 sheets of imitation wood paneling. There were tables and chairs to seat about 35 students plus a row of chairs with no tables across the back for additional guests.

The left side of the classroom had a single air conditioning window unit that dumped the heat and humidity from the classroom into the hangar.  There were a few large TV’s in the corners. At the front of the classroom was a whiteboard, a podium, and an opaque plastic screen that slides could be projected onto from behind. At numerous places around the room there were models of different types of US and threat fighter aircraft attached to wooden dowels that could be used for briefing and debriefing purposes. Most of the furnishings of this room and the rest of the spaces had probably been lifted from somewhere else on the base or traded for through the Navy supply system.

Obviously, none of it appeared nice enough to have had origins on an Air Force base."

So yeah, Hangar One provided a fairly rustic working environment considering the leading-edge of Navy fighter tactics development emanated from there for a quarter of a century.

The horrific crash that Paul Nickell mentions is largely regarded as the source of supposed hauntings. The accident was horrendous, literally a worst case scenario, that took multiple lives and left the hangar with noticeable scars. The convergence of this historic tragedy and the strange happenings that persisted inside the hangar even after the Navy turned the facility over to the U.S. Marine Corps in 1997 resulted in an official story from the USMC about it. Although the story is no longer accessible on the Marine Corps' site, it has been posted around the net. It reads in full:

History is something that lives anew whenever events and lives of the past are revisited for reflection or examination. However, it seems that in the case of Hangar One, occasionally history visits the present ... in the form of ghosts.

According to Joe Glasser, Martin-Baker representative at Miramar, there are those who have encountered the non-corporeal inhabitants of the hangar. Glasser explained one such ghostly event occurred one late afternoon when then Naval Air Station Miramar was transitioning into Marine Corps Air Station Miramar.

An officer, from Marine Aircraft Group 11 then located at MCAS El Toro, knocked on the hatch of Glasser's office and explained he would be surveying the offices in the hangar's upstairs. Twenty minutes passed and again the officer was at Glasser's hatch.

This time however, the officer was out of breath and visibly lighter in color, said Glasser.

When the Marine officer was able to articulate his concern, he asked if there were reports of unusual occurrences in the catwalks of the building. Glasser commented that he had heard rumors of "visitations from a netherly realm," but hadn't experienced first hand accounts. The officer then related his account of the events from his inspection of the

upper offices in the hangar.

Long hallways upstairs make it difficult for some to slip away from view quickly. So, when the MAG-11 officer heard footsteps and saw an opaque shadow through the frosted glass of the office, he expected to be greeted by someone walking the corridors. What he found appeared to be quite unsettling, said Glasser.

When the officer opened the door to look for the person generating the footsteps and shadow, he saw nothing more than an empty hallway.

These brushes with the supernatural begs the question, what past events of the hangar could cause it to be possessed by former and now deceased residents of the building? Jim Bradbury, the Martin-Baker representative in 1969, might know something about the haunted history of Hangar One.

Bradbury explained he was visiting the base on business on Dec. 22, 1969 when he witnessed a tragic event that left 14 dead.

The pilot of an F-8 crusader of Fighter Squadron 191 safely ejected over Kearny Villa Rd. after the engine of the plane seized, but the plane continued its course that passed through the hangar doors crashing into the north wall. The crash sent fuel spilling that ignited and engulfed several mechanics in the hangar. One ejection seat mechanic was working on a seat in a plane at the time of the event and was ejected into the roof of the hangar. Six F-4 phantoms stationed in the hangar were destroyed in the collision. Fissures that are still visible in the wall of the hangar serve as a scar of the crash.

The hauntings and lasting damage to the hangar aren't the only way this tragedy, and sacrifice of service members who paid the ultimate price, live on.

A more concrete monument that stands as a testament to the event is a memorial located on the golf course that commemorates those killed in Hangar One on Dec. 22, 1969. A plaque with the names of all the deceased rests south of the driving range keeping the memory and history of those servicemembers alive.

A few years ago, I was talking with a technician who spent time in the facility back in the 1990s. He relayed some of the creepy stories he had heard of and one he experienced himself having to do with a shadow-like human figure approaching him head-on in a hallway before suddenly disappearing. I asked if he had heard any new reports of the Hangar still being haunted. He replied:

"When the ghosts finally realized the base had been turned over to the fucking Marine Corps they probably got the hell out of there too!"

You gotta love old sailors, even tragedy and manifesting spirits can't keep their sense of irony and humor down.

The U.S. Army Once Blew Up Tunnels In A German Town To Chase Away A Ghost

The White Lady of Freihung was having none of it and kept right on haunting the area.