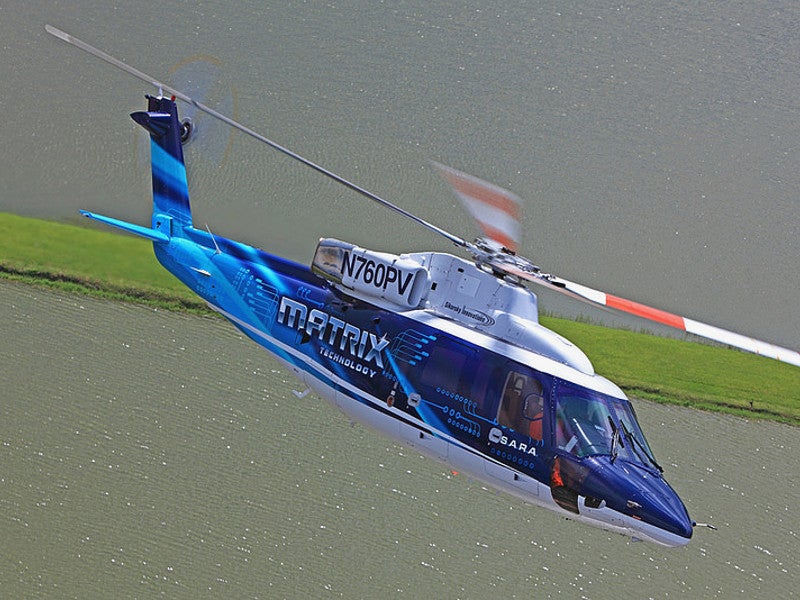 U.S. Army pilots have flown in an experimental, optionally-manned Sikorsky S-76B helicopter, albeit in an indirect fashion. The flight test was part of a U.S. military program seeking to add-in a semi-autonomous "co-pilot" that can reduce the workload on aviators, improve their mission performance, and offer new failsafes in case of an emergency.

The Defense Advanced Research Projects Agency (DARPA), in cooperation with the Army’s Aviation Development Directorate and Sikorsky, now part of Lockheed Martin, conducted this experiment under the Aircrew Labor In-Cockpit Automation System (ALIAS) program on Oct. 17, 2018. The flight, which took place at Fort Eustis, Virginia, gave the Army personnel an opportunity to evaluate the semi-autonomous system on board the modified S-76B, also known as the Sikorsky Autonomy Research Aircraft (SARA). Sikorsky’s test pilots had previously been the only ones to fly the helicopter since testing began in 2013.

“The reason this type of technology is important, is to reduce workload, the piloting workload and let the mission crews concentrate on what they’re really there to do, which is to either execute the MEDEVAC [medical evacuation], the close air support mission, or whatever they’re there to do,” Dave Braden, the Program Manager for the U.S. Marine Corps’ portion of the Future Vertical Lift (FVL) program, which also has a stake in ALIAS, said of the latest test. “Rather than concentrate on moving controls, they can concentrate on what really needs to be done.”

The SARA test bed had what Sikorsky calls its Matrix Technology, which provides autonomous functionality for both hardware and software, tapping into existing mechanical and electronic control systems. With this additional equipment installed, the helicopter will perform set mission plans that aviators can program using a small hand-held tablet.

Those same individuals can quickly modify the route or other parameters on the fly during flight, as well. Sikorsky’s modifications leave the helicopter’s main systems intact, though, in case, for whatever reason, the pilots need to take direct control of the aircraft.

During the October 2018 flight, the modified S-76B demonstrated its ability to take off and land autonomously and using a set of cameras, along with a laser imaging system, to fly to a designated area while avoiding known and unknown obstacles. The helicopter also has the ability to use its onboard sensors to determine safe landing zones automatically and to fly at low altitudes.

DARPA formally began Phase 1 of the ALIAS effort in 2014, with Sikorsky and Aurora Flight Sciences, now part of Boeing, developing their respective autonomous 'co-pilots.' In Phase 2, the two firms conducted initial demonstrations of those systems on both fixed and rotary-wing aircraft. Aurora’s system involved putting a physical robot in the cockpit of a Diamond DA-42 light fixed-wing aircraft to perform various semi-autonomous functions.

In January 2017, DARPA picked Sikorsky alone to continue to Phase 3 and work on maturing their system into something that might evolve into an operational capability not only for the Army, but for the U.S. military as a whole. The potential benefits of the system could be immense. The Connecticut-based aviation firm has also demonstrated its Matrix technology on a Cessna C-208 Caravan.

“The capability that ALIAS provides to the crew member is really like a co-pilot,” Dr. Graham Drozeski, the program manager for the project at DARPA, explained. “It can fly routes, it can plan routes, it can execute emergency procedures, and it will do all that perfectly.”

Essentially, pilots will be able to readily take their hands off the flight controls in order to operate other mission equipment, such as sensors, during a sortie. This, in turn, will help lessen fatigue, especially during long-duration missions, and reduce the likelihood of mistakes that aviators might otherwise make when they have to multi-task between monitoring various systems and also flying an aircraft.

In addition, if something happens to the aircraft, or if they’re incapacitated for any reason, such as hypoxia or wounds from anti-aircraft fire, ALIAS will be able to instantly react. Linked into the aircraft’s onboard diagnostics system, it may potentially be able to identify the issue and respond with the best course of action faster than the human operators. This would have a disruptive impact on the science of what is known as crew resource management, which started as a way to improve communication between members of an aircraft's crew and shorten the time necessary to troubleshoot problems during an emergency.

“We’re demonstrating a certifiable autonomy solution that is going to drastically change the way pilots fly,” Mark Ward, Sikorsky's Chief Pilot said in an official press release. “We’re confident that MATRIX Technology will allow pilots to focus on their missions. This technology will ultimately decrease instances of the number one cause of helicopter crashes: Controlled Flight Into Terrain (CFIT).”

Building on these basic capabilities, Sikorsky’s semi-autonomous flight system has the potential to grow in scope over time, as well, quickly offering the human pilots optimal suggestions. This could include functions such as providing routes to fly to a destination that are both safe and avoid as many known threats and natural hazards as possible. Connected to additional sensors or fire control systems, it might be able to present the best vectors for an attack or rapidly identify targets. There are already requirements for autonomous operation and pilot-optional flight in the joint-service Future Vertical Lift program and the Army's nearer-term Future Attack Reconnaissance Aircraft Competitive Prototype (FARA CP) project, among other present U.S. military aviation efforts.

Sikorsky's S-97 Raider, seen below, is a contender for the Future Vertical Lift-Light portion of the overarching FVL program.

It may eventually be able to make many of these decisions all on its own or based on a set of parameters the crew defines beforehand. It also leaves open the possibility that ALIAS might fully take the place of one or more crew members entirely, allowing for entirely unmanned flight. This, in turn, could further reduce the strain on aviators by allowing pilotless aircraft to take on a host of missions themselves as necessary.

If an ALIAS-equipped aircraft can perform various missions, even just simple tasks, such as low-risk resupply missions or just ferrying it from one location to another, U.S. military units would be able to allocate more of their pilots to more demand operational needs. ALIAS' ability to allow aviation units to do more with less actual personnel would be invaluable in an era of worrisome and chronic shortages of aviators.

The U.S. Army and Marine Corps have both become increasingly interested in autonomous resupply aircraft for exactly these reasons. The Marines notably deployed a pair of pilot-optional Kaman K-MAX helicopters, designated CQ-24A, to support their operations in Afghanistan between 2011 and 2014. Lockheed Martin provided the missions systems that allowed the K-MAX to operate semi-autonomously and lessons learned from that has filtered into the Matrix Technologies project, as well.

If the Matrix technology is as readily adaptable to any platform as DARPA hopes, it may be easy to integrate this functionality across U.S. military aviation communities with a minimum of effort. The final goal in Phase 3 of the ALIAS program is to install the equipment on an Army UH-60M Black Hawk helicopter and link it together with all of that helicopter’s flight control and mission systems, demonstrating how easy it is or isn’t to add the semi-autonomous functionality to in-service aircraft types.

“We’ve chosen the Black Hawk as the platform we want to demonstrate full integration of ALIAS-type capabilities in it,” Drozeski said. “Not just wiggling the sticks, but all the circuit breakers and switches and radios in the aircraft – we want to integrate all of those.”

Sikorsky says it is working on putting its Matrix technology into a company UH-60A testbed by the end of 2018. The modified Army Black Hawk is set to perform at least two demonstration flights in 2019.

If ALIAS works in a military context, this would mean that it would be equally useful for civilian commercial aviation applications. Airliners, in particular, have already become increasingly automated over the years. However, there is both a continued need for human pilots in many circumstances and this presents the same set of risks from physical fatigue or mental exhaustion that are present in military aviation communities.

Right now, Sikorsky is looking at integrating the semi-autonomous functionality into one of their increasingly popular S-92 helicopters. DARPA expects the work on ALIAS to continue into 2020, which could see demonstrations of improved capabilities or the ability to use the system on more varied platforms.