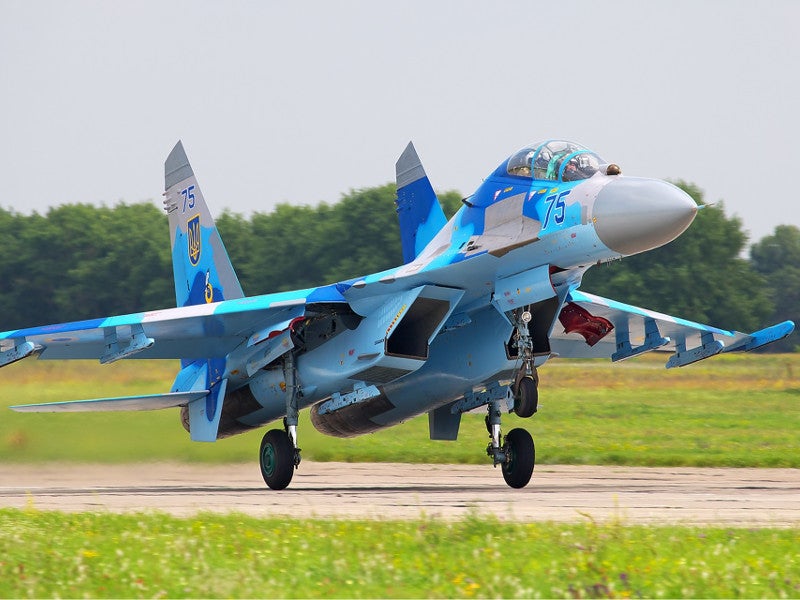 Details about the mishap are still limited, but a Su-27UB Flanker combat jet from Ukraine's Air Force has crashed in that country, killing its Ukrainian pilot, as well as reportedly a member of the U.S. Air National Guard. The jet had been flying a training sortie as part of Exercise Clear Sky 2018, which began on Oct. 8, 2018.

The accident occurred at around 5:00 PM local time on Oct. 16, 2018, near the village of Ulaniv, which is situated approximately 185 miles southwest of the Ukranian capital Kiev. Ukraine's military immediately launched a search and rescue operation that unfortunately found that there were no survivors of the crash.

"We regret to inform that, according to a report by the search and rescue team, the bodies of two pilots were found," the General Staff of the Ukrainian Armed Forces said in a statement on social media on Oct. 16, 2018. "One is a Ukrainian air force pilot, and the second is a U.S. Air National Guard pilot."

Neither the Ukrainian nor the U.S. military has identified the American aviator in question or their unit. Confusingly, the General Staff of the Ukrainian Armed Forces has already taken down its post that stated the nationalities of the two individuals onboard the Flanker, raising the possibility that the initial report may have been in error.

However, members of the California Air National Guard's 144th Fighter Wing have brought some of their F-15C Eagle fighter jets to join in Exercise Clear Sky 2018, the unit's first-ever deployment to Ukraine. California's National Guard is heavily involved in training and other activities with Ukraine's military broadly through the National Guard Bureau's State Partnership Program.

If it's true that a pilot from the U.S. Air National Guard was in the Su-27 at the time of the crash, it is important to note that it is not uncommon for members of foreign air forces to get a chance to conduct familiarization flights in each others aircraft during multi-national exercises. American military aviators would be particularly interested in riding in a Flanker, a family of fighters that is in widespread service

around the world and that the U.S. military could easily find itself facing in any potential large-scale conflict against near-peer opponents, such as Russia or China.

Though we don't yet know the exact reason why the U.S. pilot was flying in the Flanker, Approximately 950 personnel from Belgium, Denmark, Estonia, The Netherlands, Poland, Romania, Ukraine, the United Kingdom, and the United States are taking part in the drills. The stated objective is to improve cooperation between NATO air arms and Ukraine's air force.

“This is the largest exercise in the last four years. It involves more than 50 aircrafts from eight NATO member-states and our planes - of the Ukrainian Air Forces," Ukranian President Petro Poroshenko said on Oct. 11, 2018. "The purpose of the exercises is to increase the level of interoperability of our combat aircrafts with the air forces of the United States and other member states of the [NATO] Alliance."

U.S. Air Forces in Europe (USAFE), the top Air Force command in the region, has confirmed that a U.S. service member was involved in the incident, but has no made an official announcement as to their status. USAFE also said that mishap is already under investigation.

Sadly, the Air Force has now confirmed that a pilot from the 144th Fighter Wing did die in the crash. The sortie was "a single-aircraft familiarization flight," according to an updated press release.

"This is a sad day for the United States and Ukraine," U.S. Air Force Major General Clay Garrison, the head of the California Air National Guard, who is also acting the exercise director for Clear Sky 2018, said in a statement. "Our deepest condolences go out to the family, friends and fellow Airmen of both the U.S. Airman and Ukrainian aviator who were killed in the incident."