Buoyed by funding from two successively larger defense budgets, the U.S. Army has steadily shifted its primary focus from reversing the most pressing effects of sequestration to a major modernization effort across the service in order to be ready for a possible major conflict with a near-peer opponent, such as Russia or China. This includes plans for numerous big-ticket purchases, including new armored vehicles, rotary-wing aircraft, artillery weapons, air defense systems, infantry weapons, and more.

This change in focus was particularly pronounced on the showroom floor of the annual Association of the U.S. Army (AUSA) meeting and exhibition in Washington, D.C., which began on Oct. 8, 2018. The event's theme this year, which the Army selected and approved, is "Ready Today, More Lethal Tomorrow."

"War is very unforgiving for those unprepared and unfortunately, war is not going away from the human experience," Army Chief of Staff General Mark Milley said in a keynote speech on Oct. 9, 2018. "Maybe it will, but not likely in our lifetimes.”

We at The War Zone have already brought you some specific reporting from the event, including a look at some of the possible contenders for the Army's Next Generation Combat Vehicle (NGCV) program, an especially interesting concept for surface-launched anti-radiation missiles, and the service's plans to expand the ability of its MQ-1C Gray Eagle drones to engage the enemy during long-duration missions. Here are some of the other highlights we saw.

As already noted, various vehicles vying for the NGCV were among the stars of the show and were also some of the biggest vehicles actually on site. It's physically difficult to get anything much bigger, such as an actual main battle tank, into a convention center in downtown D.C. and many firms brought models of their armor offerings.

Leonardo DRS, the U.S.-based subsidiary of Italian defense contractor, Leonardo had models on display of an M1A2 Abrams tank and a Stryker wheeled armored vehicle with variants of the Trophy active protection system. Israeli firms Rafael and Elta developed Trophy and the European company is now handling the contract to integrate this system onto the Army's Abrams and potentially other vehicles in the service's inventory.

Leonardo DRS has also secured an Army contract to build prototypes of a possible new Initial Maneuver Short-Range Air Defense (IM-SHORAD) vehicle. The service's short-range air defense capabilities, or lack thereof, was a major issue item in 2017 and the development of a new mobile system that can engage low-flying aircraft, helicopters, and small drones has become a priority.

The firm's offering is a Stryker-based system with radars and other sensors to spot and track incoming targets and then engage them with a turreted weapon system on top. The vehicle has a lightweight 30mm cannon, four-round FIM-92 Stinger short-range surface-to-air missile launcher, and separate two-tube launcher for larger missiles, such as the millimeter wave radar-guided AGM-114L Longbow Hellfire.

While the Army is looking to move quickly to replace the Bradley Fighting Vehicle family as part of the NGCV program, that process will still take years to come to fruition and the older vehicles will remain in service for at least some time to come. The Bradley's chassis also forms the basis of the Army's forthcoming Armored Multi-Purpose Vehicles (AMPV), which will replace lighter tracked armored vehicles based on the dated M113 armored personnel carrier.

As such, there is still a potential market for upgrades for Bradleys and Bradley derivatives. That customer base might grow if the United States expands foreign sales of the surplus vehicles as it replaces them, too. There was a model on display of a Bradley with a Samson 30 remotely operated turret from Israel's Rafael, which is armed with 30mm cannon and a pop-up launcher for two SPIKE-series guided anti-tank missiles. The notional vehicle also had the Trophy VPS and explosive reactive armor.

As with the Lynx, the AS21's main turret has a large caliber automatic cannon along with an array of sensors and self-defense equipment, including active protection systems and smoke grenade launchers. It also appears to have a pop-up anti-tank guided missile launcher at the rear of the turret. South Korea plans to adopt the Redback itself and has submitted it to Phase 3 of Australia's Land 400 armored vehicle competition. It could be a contender for the Army's NGCV program, but Hanwha would need to either partner with a U.S. defense contractor or propose it through a U.S.-based subsidiary.

The 8x8 wheeled design also has a turret with a large automatic cannon, along with modular pods on either side for a wide array of what appear to be anti-tank and surface-to-air missiles. This would give the vehicle the ability to perform various roles depending on its configuration, but with most of the same logistical and maintenance requirements.

Singapore's ST Kinetics, which has paired up with American defense contractor SAIC on a bid for the Army's Mobile Protected Firepower (MPF) program, also displayed a model of their Bronco 3 articulated amphibious personnel and cargo carrier. The Army is looking to replace a small fleet of very similar Small Unit Support Vehicles (SUSV) as part of the Joint All Weather All Terrain Support Vehicle (JAASV) program it is running with the U.S. Marine Corps. The Bronco 3 is one of a number of more modern options that are available now.

Even as the Army prepares for larger scale conflicts, it still understands the need for light vehicles to provide airborne, light infantry, and other specialized units with added mobility during operations. There were a number of variants of Oskhosh's Joint Light Tactical Vehicle (JLTV) on display with various armament and other equipment installed, as well as smaller designs, such as Polaris' Dagor. The latter type is one of the possible contenders for an Army contract to supply Ground Mobility Vehicles, similar in concept to those already in service with U.S. special operations forces, for conventional units.

The Army plans for its NGCV's to be optionally manned and is also looking at integrating optionally manned or unmanned ground vehicles within infantry units. These could include driverless cargo carriers to reduce the burden on individual soldiers or armed types with electro-optical and infrared cameras and other sensors to increase the firepower and situational awareness of small units. There is growing interest in UGVs outside the United States, too, particularly in Europe, and not surprisingly, various types were on display at AUSA.

The Army isn't just interested in all-new armored and other ground vehicles, though. It is also pushing ahead with plans for a major transformation of its aviation elements as part of the Future Vertical Lift program. The initial phase of this project is centered on a development of a new medium-lift transport aircraft. An armed gunship derivative of the winning design may follow.

The major competitors are Bell, with its V-280 Valor tilt-rotor, and a partnership between Boeing and Sikorsky, now part of Lockheed Martin, which has submitted the SB>1 Defiant compound helicopter. The V-280 is undergoing initial flight testing already, while the SB>1 should make its first flight before the end of 2018. The smaller firm Karem Aircraft is still hoping to compete, as well, with another tilt-rotor design and had a booth at the AUSA expo.

Artillery has been another major focus for the Army, which is now looking to develop howitzers with extended range, new guided artillery rockets and surface-to-surface missiles, and acquire potentially game-changing capabilities, such as ground-based electromagnetic railguns and hypervelocity superguns. One of the most interesting concepts to come out of this push so far has been an interest in 155mm artillery shells with air-breathing ramjet engines, which could give otherwise conventional howitzers extreme range.

Norway's Nammo, which is also working on more conventional extended-range ammunition, had unveiled a new design for such a round earlier in the year. Boeing revealed its own at AUSA, as well. South Korea's Poongsan, which had previously announced plans to develop this type of ammunition in 2016 and was also at the expo, does not appear to be working on a ramjet shell at present.

Some of the foreign vendors at AUSA also had artillery concepts that might not necessarily be of interest to the Army itself, but could certainly find customers elsewhere. German's Krauss-Maffei Wegmann had a model of their Boxer wheeled armored vehicle with the company's Armored Gun Module. This is a relatively small and light turret with a 155mm howitzer inside, which you can read about in more detail here. South Korea's Hanwha also had on display a 130mm guided artillery rocket system for naval applications,

While examples of traditional air defenses and technologies to counter the growing threat of small drones were less pronounced at the 2018 AUSA gathering as compared to the year before, they were still represented in good numbers. In addition to the aforementioned IM-SHORAD program, the Army is moving ahead with its more obtusely titled Indirect Fire Protection Capability, Increment 2 – Intercept, or IFPC Inc 2-I.

This program includes requirements for a common Multi-Mission Launcher (MML) that can fire various surface-to-air missiles and hit-to-kill interceptors to shoot down incoming artillery shells and rockets, mortar bombs, unmanned aerial vehicles, and land-attack cruise missiles. The Army is looking to acquire a new missile for this system as part of the related Extended Mission Area Missile (EMAM), but has also expressed an interest in low-cost options to make it more cost effective to be shooting down relatively cheap artillery rounds and drones.

While the Army has its sights set on modernizing some of its largest pieces of equipment, it is also intent on making individual soldiers more lethal. The service is in the midst of programs that could see the replacement of all the major weapons in the infantry squad, including the M4 carbine and the M249 Squad Automatic Weapon, as well as adding additional firepower in the form of the M3E1 Carl Gustaf shoulder-fired recoilless rifle and other infantry anti-tank weapons.

When it comes to individual infantry weapons, the Army recently announced separate requirements for Next Generation Squad Weapons (NGSW) to replace the M4 and M249. This is an outgrowth of the earlier Next Generation Squad Automatic Rifle Program (NGSAR), that focused primarily on developing a SAW replacement. Both NGSW weapons will be chambered in a new Army-developed 6.8mm cartridge called the XM1186, which will offer better ballistics and terminal effects over the existing 5.56x45mm cartridge.

These are just some of the highlights of what was on display at the 2018 AUSA event, which had more than 700 vendors spread out across exhibit halls on two separate floors of the Washington Convention Center. With the Army eager to acquire more modern equipment and explore emerging technologies, it's likely that many defense contractors are continuing to work on systems to meet the services requirements that we have yet to see. 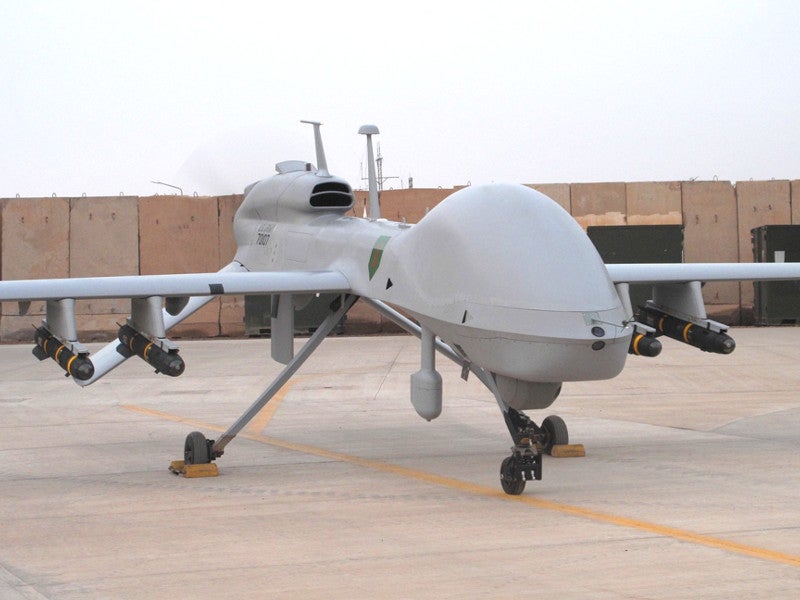 Similar dispensers could allow an individual aircraft to carry hundreds and maybe even thousands of the weapons at once. 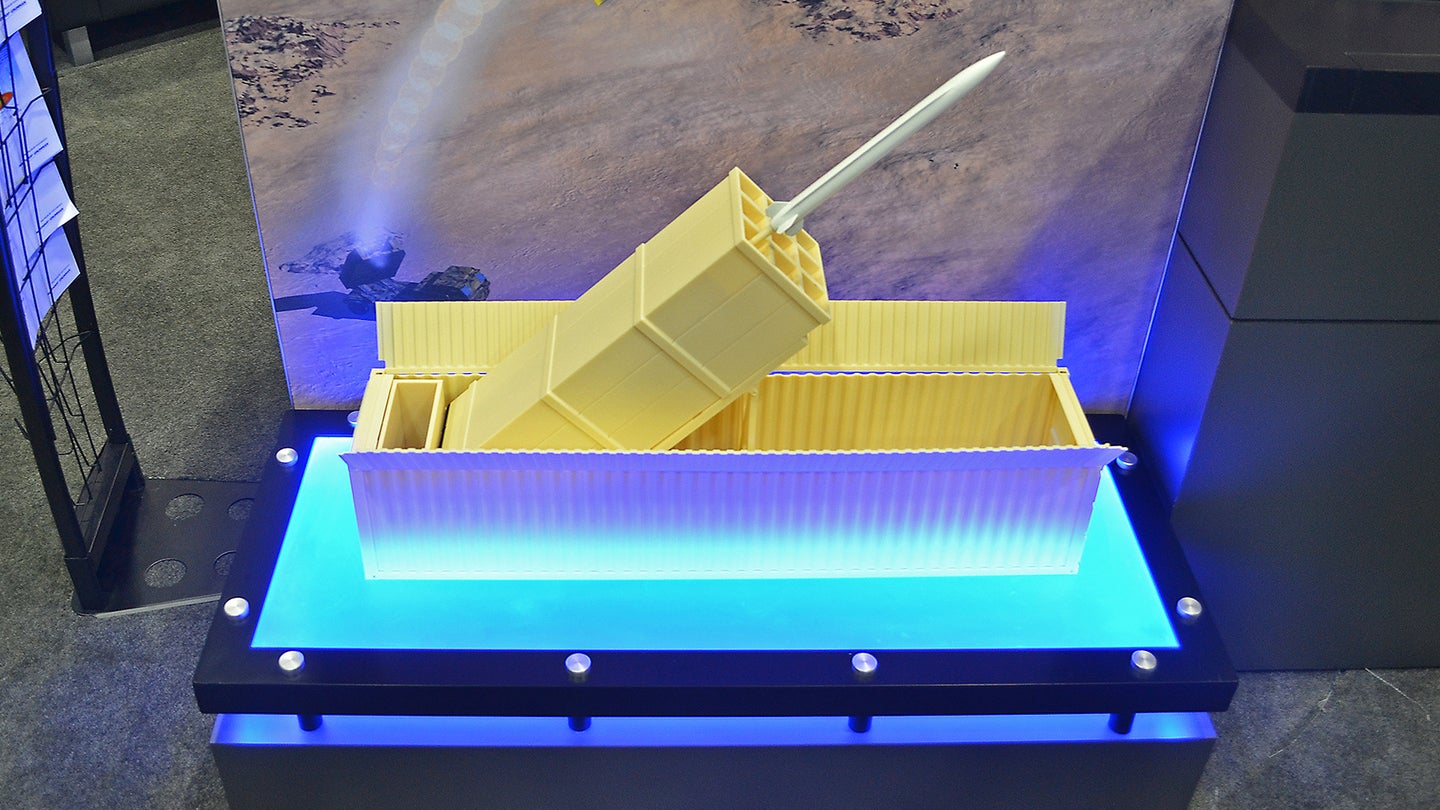