DARPA's Virus-Carrying Bugs Aren't Officially Weapons, But It Sure Sounds Like They Could Be 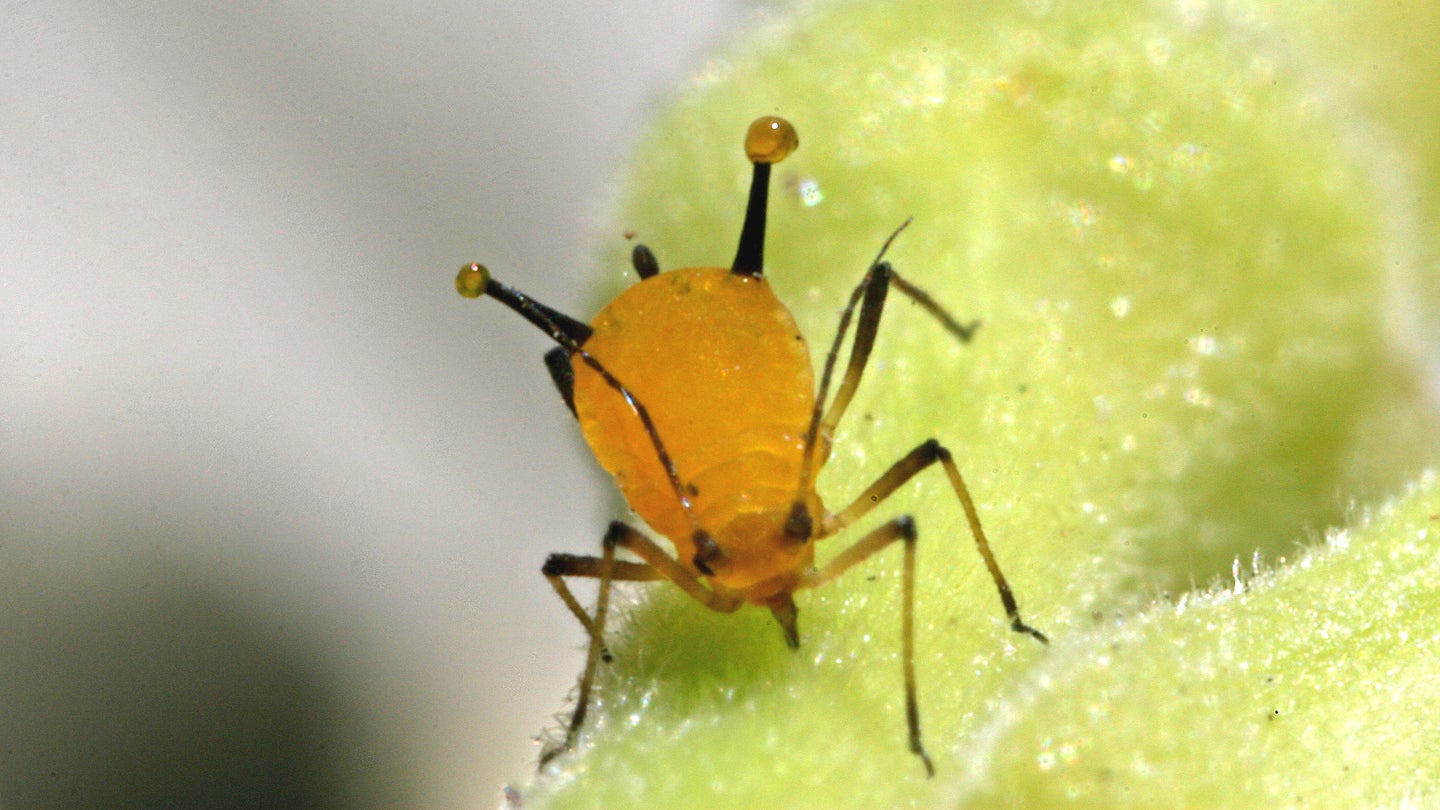 European researchers have called for greater clarity about a U.S. military program that is looking into whether insects carrying tailored viruses could rapidly genetically modify plants to resist naturally-occurring and man-made biological threats. The concern is that this research might serve as the basis for a biological weapon or simply create fears that it is a cover for such a project. That latter point seems particularly important in light of recent, but entirely unsupported allegations from Russia that the United States is running a covert biological weapons program out of a laboratory in the country of Georgia.

The op-ed calling for more transparency about the Defense Advanced Research Projects Agency’s (DARPA) Insect Allies program appeared in the journal Science on Oct. 4, 2018. The Pentagon’s top research and development arm has been working on the project since 2016.

“Food security is national security,” Blake Bextine, who leads up the program at DARPA, told The Associated Press. “DARPA plans to harness the power of this natural system by engineering genes inside plant viruses that can be transmitted by insects to confer protective traits to the target plants they feed upon,” he explained in an internal news piece in 2016.

DARPA’s idea is based around how insects naturally carry viruses and then infect plants with them. Using genetically modified viruses, scientists could potentially use bugs to quickly inoculate crops and other plants across a broad area against blights and man-made biological weapons. They might even be able to alter the genetic structure of the flora to be more resilient against those threats in the future. All of this would help protect the United States against mass crop failure, which could have potentially devastating and far-reaching impacts.

Genetic modification of plants is hardly new, but historically involved selective breeding and other techniques to achieve the desired results, which would not work nearly fast enough to respond to a widespread crisis, such as a biological weapon attack. Industrial agriculture now also includes genetically modifying seeds before they are planted, but this also wouldn’t provide a means to make immediate changes in mature, growing plants in response to a specific threat.

An initial phase of the program, which DARPA conducted incorporating with the Department of Agriculture in a contained laboratory setting, demonstrated it was possible to use small insects called aphids infected with a modified virus to temporarily impart a new trait into mature plants. The goal remains to see if it is possible to create lasting genetic changes in the same way.

The civilian and humanitarian benefits of the Insect Allies program are clear. Unfortunately, so are more malign applications. The entire project is predicated on the reality that insects already infect plants with disease. If scientists are capable of altering what viruses they carry to shield plants against certain dangers, it is just as feasible that they could carry deliberately engineered threats.

There’s also the concern that a virus that might have a positive impact on one type of plant, might have negative effects on others. There’s no guarantee the infected insects would choose to stay inside designated areas, either.

Of course, there’s no guarantee DARPA’s program will actually lead to any sort of practical result and some scientists have questioned whether the Insect Allies idea could ever work. The U.S. military as a whole has previously explored using insects to attack opponents physically, detect bombs, and more, none of which made it into widespread use.

The U.S. government, for its part, maintains that the program is in no way developing a weapon and is within the limitations of the Biological Weapons Convention, an international arms control agreement to which the United States is a party. But the authors of the piece in Science contend that the mere potential of the project to become a weapon may leave other countries with no option but to treat it as such and pursue their own similar research.

“The pure fact that this is a military program would naturally raise these sorts of questions,” Todd Kuiken, a senior researcher at North Carolina State University who raised similar concerns about Insect Allies in 2017, told The Associated Press. He added that he does not believe the U.S. government is actually looking to develop an insect-borne biological weapon.

“It's really about how it's perceived,” Dr. R. Guy Reeves, one of the co-authors of the piece in Science who is a biologist at the Max Planck Institute for Evolutionary Biology in Germany, explained to The Associated Press. It is his opinion that the technology DARPA is working on through Insect Allies makes much more sense as a weapon than as a safeguard.

The U.S. has already weathered allegations that it used insects as vectors to spread diseases that would affect people, animals, and plants during the Cold War, but none of those claims were ever substantiated. That storyline did make it into an episode of the television show The Americans, in which fictional Soviet intelligence agents uncover supposed evidence of this plot.

With all this in mind, there is also a potential for negative perceptions about Insect Allies, right or wrong, to get weaponized itself. On the same day the article in Science came out, Russia publicly accused the United States of covertly running a biological weapons program under the cover of a civilian laboratory situated in the country of Georgia.

"To hide the true nature and purpose of this facility it was formally included in Georgia’s health care system,” Russia’s Foreign Ministry said in a statement on Oct. 4, 2018. “The US provides no information on these dual-use activities as part of the confidence-building measures of the Biological and Toxin Weapons Convention.”

There is absolutely no evidence to support these assertions, though it is true that the United States funded the establishment of the Richard G. Lugar Center for Public Health Research in Tbilisi, Georgia. The Georgian National Center for Disease Control and Public Health (NCDC), an analog to the U.S. Centers for Disease Control and Prevention (CDC) runs the facility, which conducts research on infectious diseases in humans and animals to guard against epidemics and biological attacks.

There is no independent confirmation of claims that more than 70 volunteers died during a drug test at the facility at all, let alone that this was a cover for the development of a biological agent. This isn’t the first time Russia has made these conspiratorial allegations and it seems very likely that they raised them in this case in order to deflect from reports that Russian intelligence agents had sought to hack into the computer networks at the Organization for the Prohibition of Chemical Weapons (OPCW) at The Hague in The Netherlands.

Both American and Dutch authorities say that Russia had targeted the OPCW. In response, the latter country expelled four Russians they had identified as members of Russia’s top military intelligence agency, commonly known as the GRU, and summoned the Russian ambassador for an explanation.

“The Dutch government finds the involvement of these intelligence operatives extremely worrisome,” Ank Bijleveld, the Dutch Minister of Defense, said in a press conference. “Normally we don't reveal this type of counter-intelligence operation.”

The OPCW has been among the organizations seeking to conclusively identify the chemical agent assassins used to try and kill former Russian intelligence agent Sergei Skripal in the United Kingdom earlier in the year. U.K. authorities have already declared that the substance, one of a family of agents known popularly as Novichok, came from Russia.

Russia routinely uses misinformation and disinformation to distract from its own malign activities, typically accusing its accusers of the same crimes or something tangential in nature. State and quasi-state media, along with individuals on social media, then boost those stories until they take on an organic quality all their own.

These claims do not necessarily need to make sense to sow confusion and conflicting information into a broader narrative, but it certainly helps if they are plausible to any degree. Though the Russians haven't specifically criticized the Insect Allies program, its basic details are very real, unlike the allegations about the Lugar Center in Georgia, even if there’s still no evidence whatsoever that it is actually a biological weapon development program. This could make it a prime target for an information warfare campaign in the future.

“Once you make those kinds of breakthroughs, you are in a new world. It's a morally ambiguous place,” Paul Thompson, an agriculture and ethics professor at Michigan State University who also sits on one of DARPA’s advisor boards told The Associated Press in reference to Insect Allies. “You wonder, ‘Is this something that we should never do?’”

The U.S. military’s answer to that question is clearly, and at least presently, yes. It remains to be seen if its own perception of Insect Allies will change amid steady concerns about the project’s aims and public image, or any attempts to turn those issues into an entirely different kind of weapon.